Please note: this article contains spoilers for both the Telltale Game of Thrones and the HBO show.

Apparently, the latest series of HBO’s Game of Thrones got underway on Sunday evening. Who knew?

Cue the suspension of all other activities as, for the next few weeks, viewers across the globe enthusiastically debate the biggest plot twists, dissect the most plausible fan theories, pretend they didn’t re-watch the raunchiest sex scenes multiple times on YouTube, and generally immerse themselves in George R. R. Martin’s superlative fantasy world.

Naturally, in an effort to capitalize on this incredible popularity, a handful of video game adaptations have been released in the years since the show debuted in 2011 but, as is so often the case with multi-media tie-ins, most of them are underwhelming, transparent cash-grabs that share nothing more than a name with the original source material.

Apart from Telltale Games’ Game of Thrones graphic adventure, that is.

Though not as ground-breaking as the television series or perhaps even the studio’s best work, what Telltale did that no other developer has done, before or since, is capture the very essence of the Song of Ice and Fire saga, and translate it triumphantly to our beloved medium.

Aside from its mature approach to the fantasy genre which, along with its innate unpredictability, differentiates it so effectively from the likes of The Lord of the Rings and The Chronicles of Narnia, arguably the biggest contributing factor to Game of Thrones’ astronomical success is the intricacy of its various, interconnecting plots. Elements that, crucially, Telltale’s Game of Thrones offers in abundance, using the studio’s signature dialogue wheels and quick time events to keep the spotlight fixed squarely on the characters and their trying experiences.

Set between seasons 3 and 5 of the television series, the game follows the technical canon but essentially follows brand-new House Forrester – bannermen of the Glovers and thus loyal to the Starks – who, in the wake of the now infamous Red Wedding, and like so many of the great Northern houses (the Starks included), suddenly find themselves in an extremely precarious political position. 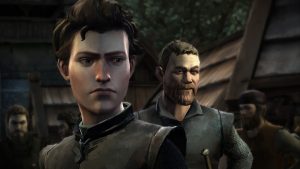 Telltale couldn’t have picked a more interesting setting for its first foray into Martin’s world. In an uncertain political climate where no one is safe, the various betrayals, murders, and power-plays that occur throughout the course of the 6-episode series are perfectly explicable. The death of Ethan Forrester at the hands of repugnant villain Ramsey Snow during the climax of the very first episode ‘Iron from Ice’, for example, while undoubtedly shocking, is far from incongruous in this context. Just like the show, death is an ever-present threat lurking around every corner.

And, while Ethan’s albeit brief story arch encapsulates the precariousness of life in Westeros, his sister, Mira’s (handmaiden to Margaery Tyrell), focuses on the backstabbing and court intrigue that’s almost part and parcel of life in King’s Landing, made all the more perilous in this instance because Mira and, by extension the player, is never sure who to trust.

The gameplay reflects this uncertainty superbly, leaving it entirely up to the player to decide whether Mira remains loyal to Margaery or chooses instead to side, surreptitiously, of course, with Cersei Lannister; whether Mira remains honourable and risks inadvertently harming her family, or sacrifices her virtue in the hopes that blackmailing other noblemen and throwing her friends to the wolves might better protect her loved ones. Difficult as it can be to locate the safest path through this political minefield, when all’s said and done, it’s these kind of moral quandaries that are at the very heart of Game of Thrones.

This mixture of new, purpose-built characters and familiar faces from established ASOIAF canon, meanwhile, affords the quintet of parallel narratives a legitimacy and appeal that might have been absent if they were completely separate from the events of the show and novels. Rodrik’s attempts to stabilize his lands amid a torrent of bloodshed and a fast-changing world hierarchy, for example, has greater significance to the player because his tale intertwines with that of a recognizable character like Ramsey Snow.

It also helps that a comprehensive, 3-dimensional backstory was designed for the Forresters, complete with their own house words, sigil, domains, and culture. Likewise, it’s a huge boon for the game that Lena Headey, Peter Dinklage, Emilia Clarke, and co. agreed to reprise their respective roles, lending both their considerable acting talent and globally-recognizable likenesses to the game, the latter of which is rendered in Telltale’s characteristic cel-shaded art style. Far from derivative, tangential spin-off’s, Rodrik, Mira, Ethan, Asher Forrester, and Gared Tuttle’s stories feel authentic, slotting neatly into the events of the wider Game of Thrones universe.

However, it has to be said this validation comes at a price. The very fact the game takes place within the framework of the TV show means that the player already knows the established characters, such as Ramsay and Cersei, are protected. Ramsay’s comeuppance, for instance, is saved until ‘The Battle of the Bastards” at the back-end of season 6, so the player is acutely aware his deplorable actions throughout the course of the game (which, as well as stabbing a teenager to death in the presence of the unfortunate adolescent’s mother, includes flaying a man alive because, you know, he’s an absolute lunatic) will go unpunished. Though certainly not as detrimental to the experience as some critics have suggested in the past, it nonetheless limits the game’s narrative potential to a certain degree.

Similarly, some have bemoaned the fact they’re powerless to prevent Ethan’s death or even mitigate the suffering of the other protagonists at times, accusing the developer of offering only the illusion of choice, not the branching narrative journeys of previous titles such as The Walking Dead: Season One or Tales from the Borderlands. As my brother put it, no matter what the player does, things will inexorably get worse for the Forresters.

However, far from creating an unbearably oppressive atmosphere or robbing the adventure of any kind of pay-off, this slightly different approach to storytelling suits the Game of Thrones tone and style far better. From Ned and Catelyn Stark to Jorah Mormont and Ygritte, the show has featured a cavalcade of virtuous individuals over the years who, despite their best efforts, are ultimately at the mercy of others and can thus do little to avert their bloody fates. As Martin himself has stated many times before, A Song of Ice and Fire isn’t supposed to be uplifting.

Despite these 1 or 2 minor problems (depending on your perspective) Telltale’s Game of Thrones still manages to do exactly what the program does year after year: generate a genuine sense of anticipation for the next series.

First and foremost, differing from the developer’s previous franchises which typically shift focus entirely with each sequel, Season 2 will continue the Forrester’s story, presumably chronicling their efforts to recover from the depredations of Season 1 that have left them severely weakened and vulnerable to the machinations of their hostile neighbors, the Whitehills. Consequently, whereas the player’s choices in The Walking Dead: Season 1 have very little if any impact on Season 2, those who, in the heat of the moment, made the ‘wrong’ decision in Game of Thrones: Season 1 will have to accept the consequences of their actions in all future installments, making each and every exchange that much weightier.

Designing the game with the future in mind also benefits Gared’s story. With so much time dedicated to the tense, politically-charged plot lines involving the Forrester’s themselves, Gared’s tale of blood magic, wargs, and white walkers didn’t always receive the attention it deserved. However, with a second series on the horizon, it’s simply a case of gratification deferred rather than potential unfulfilled and we can thus expect to delve deeper into the significance of the North Grove and its guardians when the sequel finally arrives.

Telltales’ Game of Thrones was never going to be as popular or definitive as the heavily lauded source material. As hard as Telltale clearly worked to create something worthy of Martin’s fabulous novels and HBO’s TV adaptation, that same sense of originality and unadulterated wonder was bound to be absent.

But that doesn’t mean it should be disregarded out of hand. Telltale’s Game of Thrones is a wonderful tribute to A Song of Ice and Fire notwithstanding and, more importantly, an excellent video game in its own right. One that every true fan should experience at least once.