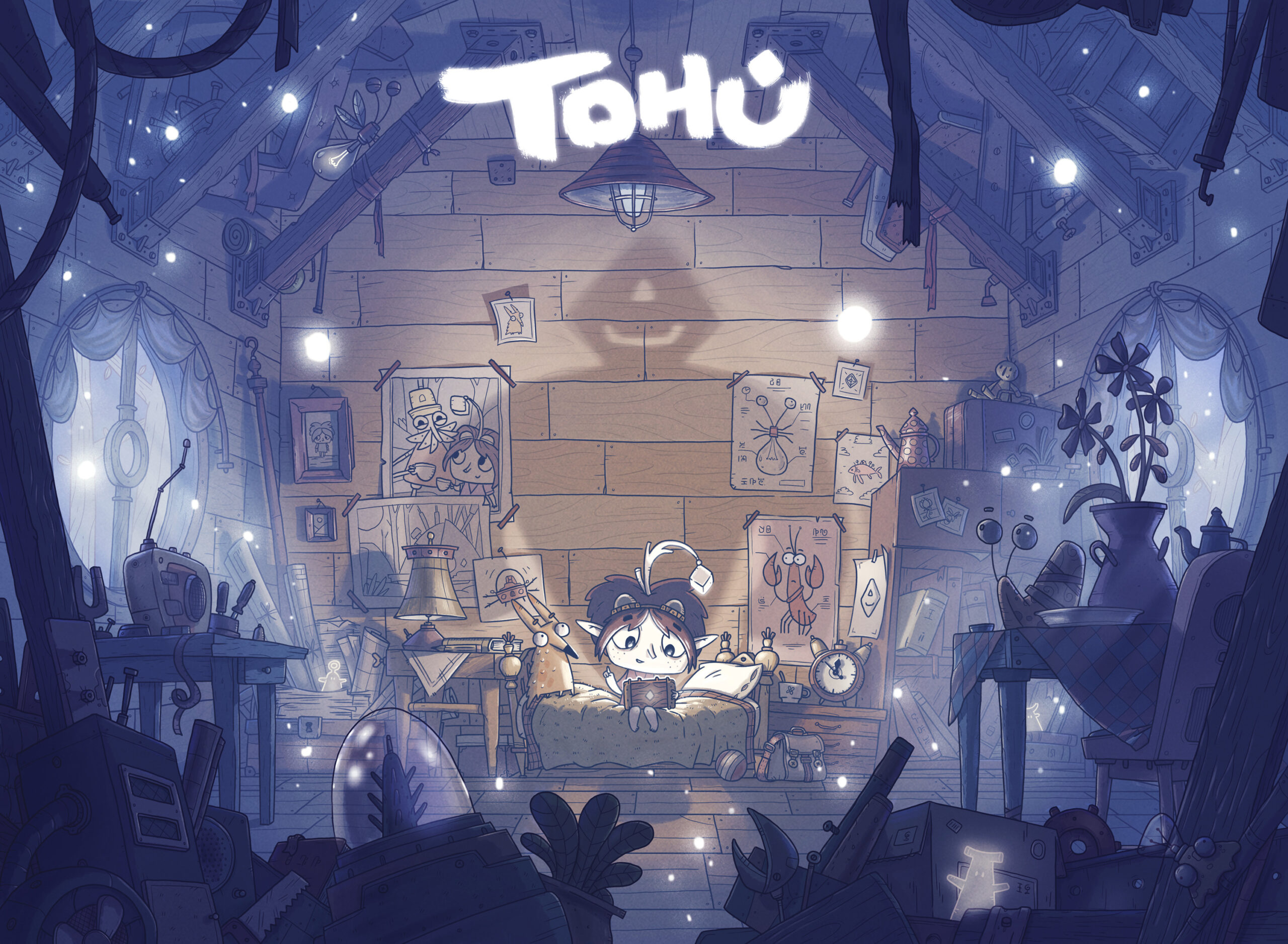 Point-and-click adventures have been enjoying a resurgence lately, thanks in large part to the independent scene. While it takes a lot to stand out in a crowded field, Fireart Games’ TOHU manages to do so with painterly art direction and wonderfully serene music, as well as deviously funny and clever puzzles. In this early part of the year, a desert for video game releases, playing TOHU feels like stumbling upon an oasis. A refreshing and invigorating take on a genre that’s seen a lot of variation, TOHU stands proud with clever design innovations and eye-catching visual design.

Puzzle games, particularly point-and-clicks, tend to fall into the comedy camp. Ever since The Secret of Monkey Island made a splash, it seems like every subsequent adventure title has aimed to reach similar heights. TOHU does things a little differently. The game is nearly dialogue-less, but that doesn’t mean TOHU is lacking a sense of humor. Drawing more from Machinarium than Thimbleweed Park, there’s a slapstick sensibility to puzzle solutions that is genuinely delightful.

Player character The Girl lives on a Fish Planet, one among a school. When the Sacred Engine that powers the planet is disabled by a hooded stranger, The Girl takes to neighboring areas to find tools to fix the issue. It’s a simple plot, full of colorful characters. There’s the forgetful Juncle, whose memory must be jogged with photographic evidence before he’ll help The Girl, and of course, The Girl can’t hop between planets without her trusty fly-powered aircraft. The world of TOHU feels almost as if the sci-fi insanity of Rick and Morty met the heart and warmth of Steven Universe.

TOHU rides a fine line. A puzzle game is only enjoyable as long as it isn’t frustrating, something Ron Gilbert correctly noted in his excellent treatise on game design, “Why Adventure Games Suck”. A generally patient lot, gamers will accept leaps in logic if the end result is enjoyable. In TOHU, The Girl solves puzzles with infectious enthusiasm and excitement. The Girl is expressive, smiling in wonderment when items are applied correctly or nonchalantly shrugging if a player tries to use a found item for something other than its intended purpose. She even has a ridiculously cute idle animation; when left alone for a few moments, The Girl will whip out a wood-paneled Switch and go to town. If the player tries to pick up an object too heavy for The Girl, she’ll growl and flex her muscles, a visual cue for the player to transform The Girl into her mechanical alter ego: Cubus. As TOHU helpfully spells out, Cubus is big. Cubus is strong. Cubus can carry giant fishbowls with ease, and huck a hunk of metal offscreen to reach whatever it was blocking.

Swapping between The Girl and Cubus is simple and adds a lovely layer of complexity to exploration. With a simple click, one character transforms into another with ease. The Girl can clamber up shelves and stools to reach locations that Cubus can’t, while the robot’s strength is the only solution to several problems. It’s an elegant way to interact with the environment.

Due to a uniformly excellent hint system, players rarely if ever run into the gut-wrenching feeling of stuckness so common in poorly-designed puzzle games. Players are never punished for opening the hint menu, and though it offers a roadmap of what to do next, things are never explicitly spelled out. TOHU‘s hint sheets are puzzles in themselves: learning to interpret the comic book panels to reach correct solutions still feels like the player is solving things on their own. It’s a remarkable achievement that helps propel players forward.

The puzzles themselves are wonderfully imaginative and often laugh-out-loud funny. An early door is blocked by a mole-lock, and The Girl must find a way to unlock it. What’s a mole-lock? Why, a door that can only be opened by plugging appropriate moles into various holes. The absurdism is easy to get on board with, and is sprinkled all the way throughout each gorgeously detailed environment.

TOHU is the rare example of a puzzle game that feels soothing to play, in large part due to its aesthetics. Most puzzles take place within a screen or two, so players have ample time to take in the details. By design, objects that the player can interact with are not outlined. While it is initially frustrating not knowing what objects can be clicked on and stored in the inventory or which characters can be conversed with without moving the cursor over them, this forces the player to meticulously examine everything. The result is an appreciation for every little are an asset, no matter how small.

This attention to detail carries over to collectibles. All over the Fish Planets are adorable and weird creatures that can be examined and added to The Girl’s notebook. Finding these critters and cataloging them has a bit of a “Where’s Waldo?” feel. Filling out the notebook is its own reward, and one more reason to spend time in TOHU‘s strange and wonderful world.

The visuals are undeniably one of TOHU‘s strongest elements, but its background music is another ace in the hole. Composer Christopher Larkin (of Hollow Knight fame) lends his talents to TOHU, with another score that is delightfully easy on the ears. With some puzzle games, the player might eventually be compelled to turn down the music to better focus on finding solutions. In TOHU, the music underscores the themes of the experience. Relaxing and soothing, Larkin has crafted a fitting soundtrack.

Point-and-click adventures may not be for everyone, but for players intrigued by the art style who want to try something different than their usual taste, TOHU is an excellent onboarding experience for the genre. Occasionally, a clue might be a little too cryptic, and information is sometimes difficult to parse. But TOHU keeps things fresh enough that players won’t be stumped for long. Hitting upon the right solution to a puzzle is always a euphoric feeling, and in a period where it seems like few new games are on the horizon, a little euphoria goes a long way.