The list of playable video games exists in a vast, ever-expanding universe; its depths can be almost impossible to fathom for common players simply trying to navigate their way through the great multitudes. With so many options, how does one choose? It’s no wonder then that so many ‘average’ titles disappear into the medium’s endless ocean — coldly cataloged by name and discovery date, then quickly forgotten in the search for bigger, brighter things. Secondary stars like Ubisoft’s recent open-world space adventure, Starlink: Battle for Atlas, may not be the most dazzling, may not contain the most blistering gameplay, but they do shine — one simply has to see them first. But how to do that when the industry and audience seem to train their eyes more and more on the supergiants?

It helps to be a bit of a romantic, to be sure. There’s obviously nothing wrong with a person being drawn to the latest Call of Duty, Red Dead Redemption, Assassin’s Creed, Legend of Zelda, Super Mario, or Grand Theft Auto game over something like Starlink — in fact, in a sense it’s very rational. After all, gamers have budgets, and must spend their money wisely. Proven track records are certainly an intelligent way to do that, and the brilliance of the supergiants doesn’t just apply to the entertainment they offer; in many cases they are also cultural events, like the latest Avengers or Star Wars movie — so there is a social component as well. Nobody likes to feel like they missed out on a phenomenon, a gaming zeitgeist. 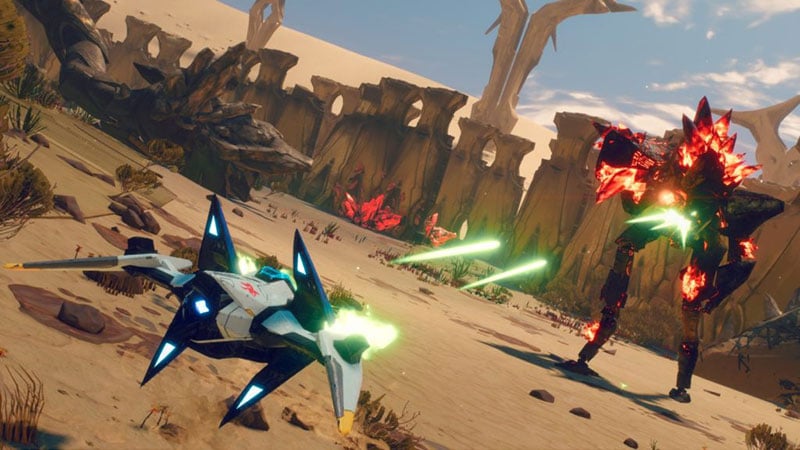 Meanwhile, games like Starlink: Battle for Atlas have silly, unfamiliar names, and don’t get even close to the amount of press coverage that Nathan Drake’s latest adventure amasses. Whether the game is good or not is nearly irrelevant; we covet what we see every day, and Starlink just isn’t scintillating enough.

This is where the romance comes in. To be a romantic is to idealize; it’s to be hopeful, optimistic, adventurous, and above all, impractical. It means trying something on a whim, looking at that Metacritic average of 74 and giving it a shot anyway. One almost has to be a bit of a romantic to even peruse objects of lesser luminescence, let alone stop to ponder them, but these moments are where joyful discovery happens.

I keep bringing up Starlink because after starting my second playthrough, I feel lucky to have found it. Though I was less than impressed with the demo at E3, I was looking for something to play before Pokemon Let’s Go released, and for no reason other than pure whim, I decided to dive in head first. Starlink has since turned into one of my favorite gaming experiences of the year, and while that’s not to say it deserves awards or a coveted spot in prestigious Top Ten lists, this is a perfect example of how much a game that averaged review scores just north of  ‘7’ can actually appeal to particular players. They just need to give it a chance. 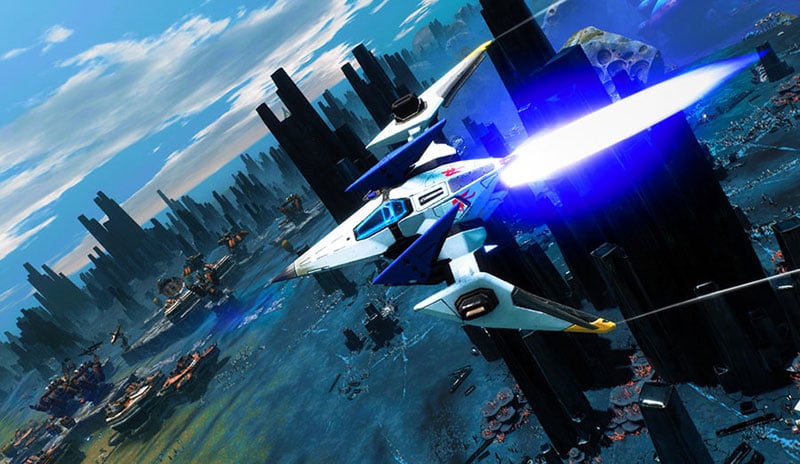 For those unfamiliar, Starlink is a sort of spaceship shooter/adventure game, where players find themselves piloting customizable crafts across the galaxy. The transition between outer space and descending to the several different explorable planets is seamless, allowing for an impressive amount of freedom in how one maneuvers through the story. A stereotypical ‘evil alien race’ bent on domination means that there are plenty of things to shoot fire lasers and ice missiles at — everything from patrolling drones to giant reactors, as well as some giant mechanical spider bosses thrown in for good measures.

Finding collectibles and doing optional missions earns XP as well as possibly mods that enhance the various systems on your ship, while a slight real-time strategy element keeps focus on the main campaign lest your newly-liberated planets become overrun again. The game offers a wealth of depth and options, but also remains accessible to beginners (like myself), and the addition of Star Fox as a playable character — Arwing and all — for the Switch version turns it into one of the best offerings in that franchise, despite not even being in that franchise.

Too often the discussion around entertainment devolves to the point where if you’re not amazing, you’re nothing. Well, Starlink isn’t amazing. The story isn’t captivating, the visuals aren’t awe-inspiring, and the open worlds feel less like planets and more like giant sand boxes. However, the gameplay loop is addictive and satisfying — to me, anyway — and the vibe projects a certain innocence that gives off an old-fashioned charm; flying around colorful landscapes battling a superforce called the Legion to save the galaxy while recruiting groups of explorers, vigilantes, and mining prospectors to a family-friendly Alliance feels quaint, and the wholesome, straightforward dialogue (including the cheesy optimism from Fox himself) could have nearly been out of a 1950s TV western if it weren’t for the techno-babble. 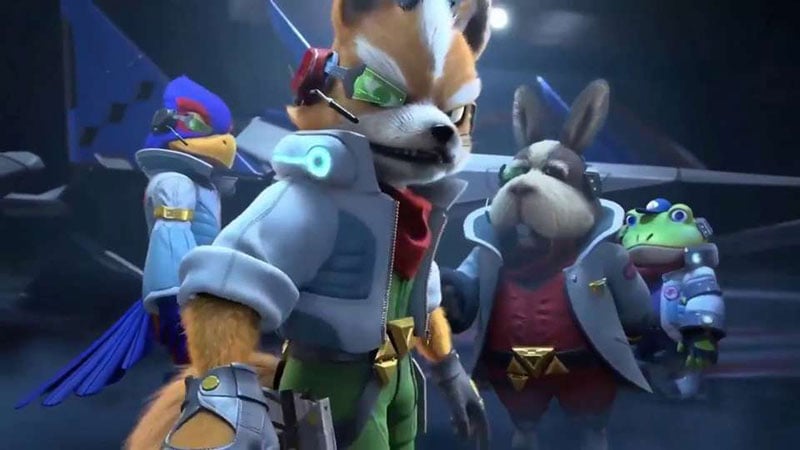 The logical part of my brain, trained to look for greatness, is confused by the many hours I’ve now put into this game, the growing urge to 100% it. Critics are usually expected to remain detached from their assignments, as if feelings shouldn’t play a part when analyzing something designed to produce an emotional response, but despite Starlink‘s logical flaws, I keep playing and playing. Sometimes we have to be reminded that enjoyment isn’t just about craft — it’s also about heart. Film critic Robert Warshaw once wrote that “A man goes to the movies. The critic must be honest enough to admit that he is that man.” What that means is that regardless of whether a film or game or book meets certain artistic or craftsmanship criteria, it’s the job of the person reviewing to acknowledge any other effect it has on him or her, embarrassing as that may sometimes be.

Why? Because that sort of open confession is how small discoveries might be made. Just a few sentences could tip the scales for the curious-but-cautious gamer, allowing them to give in to the urge to explore farther into the gaming cosmos. Despite the general consensus of game critics who more and more seem to speak as a collective, there are players who won’t click with a game receiving perfect scores, but may actually love one averaging 7s. And if they do end up loving it, the industry needs to know, which may hearten those creators who actually try something different. The blockbuster system — where a few games get all the big developer money at the expense of medium-budget experimentation — kills whimsy, and whimsy is vital to the health of any artistic medium. Just ask Hollywood.

Box office numbers keep rising upon the backs of behemoth movie franchises like the MCU and Star Wars, but at what cost? Instead of searching for the next Gone With the Wind, Psycho, 2001: A Space Odyssey, or The Godfather — films that propelled the evolution of cinema, yet were also financial hits — studios now devote the vast majority of their resources into finding the next Avengers, Transformers, Pirates of the Caribbean, Jurassic Park, or Mission: Impossible. See the difference? It may be good for the bookkeepers, but has the pursuit of the mega-hit been good for the movies? Sure, independent filmmakers will still pursue artistry on the cheap, but fulfilling the vision of movies like Lawrence of Arabia and Close Encounters of the Third Kind requires money, even if the films themselves aren’t precisely manufactured to rake it in.

Like with films, word of mouth used to propel game sales; genuine excitement can be contagious. Now, if a title doesn’t get noticed quickly, it gets lost. The purpose of this article is to remind gamers that there are many stars in the night sky aside from the brightest ones, but if we don’t take time to look at them, they may cease to exist. Once upon a time, The Legend of Zelda and Final Fantasy were just anonymous games on store shelves lined with dozens more; who knows where the next classics could come from? Games like Starlink inspire me to remember that it’s important to explore the universe of video games as much as one can — not just for our own discoveries, but for the future of gaming possibility.