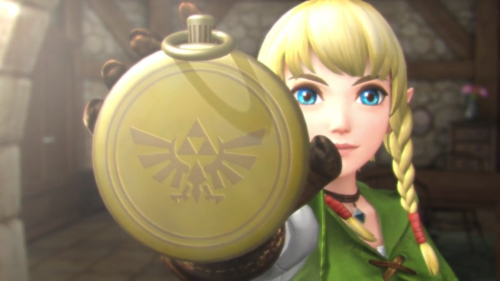 The road to becoming a hero is an uphill one, filled with devilish obstacles to overcome, monstrous enemies to slay, and sometimes, lots of people making fun of your name. This is how it goes in Nintendo Land, where as soon as you’re born, you’ve got to win ’em over. Just ask Waluigi, the Wii, half the Pokémon out there (looking at you, Krookadile and Mr. Mime). Soon the name of Hyrule’s new heroine, Linkle, will roll off the tongue with no more effort or strangeness than those, and when that time comes, all that will matter is, well, if she matters.

For the newest addition to Hyrule Warriors Legends to stick around, Nintendo will have to prove why she belongs, and while making great games will of course help the most, there are a few other reasons why Linkle stands a decent chance of rising above the likes of the C-squad mascots. One, she’s a female Link. This may seem inconsequential to some; why have a female Link when there aren’t female versions of other characters? There’s no Maria, or Kirbette, after all (the name Kirby is becoming more unisex, but you know, that would just be confusing). In fact, The Legend of Zelda already has a female lead, and her name is smack dab in the middle of the title, right? True, but as Nintendo has yet to make a traditional Zelda game where Zelda is the main controllable character, that doesn’t count for now. And while a Maria could be hilarious fun, there’s a difference between how players relate to Mario vs. how they relate to Link. Mario is definable, but the Hero of Hyrule is not so much. Link was always meant to symbolize the player. As his name suggests, he’s the connection by which the player can insert themselves into these strange lands, left purposefully devoid of personality so that those who push the buttons can transpose their own upon him.

That he’s male isn’t a problem or anything, and women have had no trouble enjoying the franchise that I’m aware of, but as the goal has always been strengthening the relationship between the player and the world through this “link”, anything that helps a person identify more closely with the avatar through which they will experience the adventure is a good thing. Linkle is simply another option, and who hates those? If we were talking about a complex character with a rich backstory that was following a satisfying emotional arc, then sure, I’d say don’t screw it up by awkwardly forcing anything. But this is Link we’re talking about; even Samus is deeper. Because over thirty years of existence he has essentially just been a stand-in, maybe one day we’ll see a choice offered on the menu screen before starting a new file, one asking whether we’d like the boy with the sword or the girl with the crossbows. That possibility is exciting, but for another reason as well. What if a Zelda game could be tackled in two different ways, from two different perspectives, and with two different styles of gameplay? The introduction of Linkle allows for this Resident Evil-type hypothetical, as well as presents the potential that in her own starring vehicle (which I believe could even be announced this year) the weapons we’ve seen her packing in the various Hyrule Warriors Legends trailers could really add some nice variety to the blade-swinging we’ve become accustomed to. Sure, Link fires his bow with expertise and utilizes whatever prizes he obtains from dungeons to achieve victory, but the Master Sword will always be his go-to, the most powerful way to hack and slash his way through a monstrous boss and ultimately defeat Ganon (light arrows aside). Linkle’s crossbows might require a different strategy for taking on the beasts of Hyrule, necessitating the heroine keep her distance at first, before upgrades earned along the way turn them into medieval Gatling guns with tempered stocks perfect for a nice melee attack.

In fact, the open-nature of Linkle gives Nintendo the chance to explore the world of Hyrule or one of its many adjunct kingdoms in an entirely different genre. The company has created a number of offshoots from many of its popular series (Mario being the most obvious and prolific spinoff factory), but outside of the recent Hyrule Warriors and Triforce Heroes, some awful-sounding Tingle titles, and the game made to sell a peripheral, Link’s Crossbow Training, the Legend of Zelda franchise has remained relatively singular in scope, with almost every entry starring an incarnation of the same hero, and each sticking close to a well-established formula. There’s nothing wrong with that, of course, as Zelda games are among the most revered of all time for a reason, but the potential for other experiences in that world is one of the reasons the introduction of Linkle is so exciting. Games like Luigi’s Mansion and Captain Toad: Treasure Tracker are very welcome changes of pace, and have become beloved in their own right. Linkle doesn’t need and isn’t served by soloing in a traditional Zelda experience. It only will invite comparisons to Link’s acclaimed adventures, thus inviting comparisons between the characters themselves, but it will also do nothing to expand the world of Hyrule. Instead, if Linkle is given the opportunity to shine in a completely different genre, like a side-scrolling RPG (The Adventure of Linkle), a solo combat extravaganza a la Bayonetta, or something more puzzle-oriented, she can define herself and make an impression on players that will separate her from her counterpart, yet still allow them to exist in the same universe. There is so much potential for the world of Hyrule, and Linkle represents the best chance in years for some of that to be realized.

Linkle may never achieve the idol status that three decades of masterpieces has bestowed upon Link, but as a rare new playable character in the Zelda franchise, the sky is the limit. With series producer Eiji Aonuma already stating that they’re sure they’ll “keep her in mind when thinking about future titles,” I expect that Linkle is here to stay.