There’s something to be said about narrators in video games. From the sage-like wisdom of The Legend of Zelda: Ocarina of Time‘s (1998) Deku Tree, to the perceptive Gaia of the God of War series, or even to The Witcher 3: Wild Hunt‘s (2015) older, wiser Dandelion, the use of the narrator in games is nothing new. However, this doesn’t mean it’s not a storytelling device that isn’t special. The presence of a narrator seems to sprinkle on just a little more magic; they’re an ensured figure of wonder and excitement that nestles one into the warmth of a tale, whether new and restless to be relayed, or those told again and again, but never quite losing their charms.

Light Fall, a 2D platforming title developed by indie developer Bishop Games, originally backed on Kickstarter in 2015, and released on the Switch (and other platforms) in April 2018, is such a game that does champion a narrator, and benefits all the more for it. Sticking heavily to the tried and true ‘hero’s journey’ structure, and meticulously pairing it with smooth, fluid mechanics designed to facilitate speed, this is a title that will appeal to players who like a serving of narrative with their platforming. This isn’t to say that the game is as perfectly iridescent as the crystals that line its landscapes, as some evident flaws do mar the shine. However, Light Fall is an enjoyable 2D platformer with more of a specialist appeal. 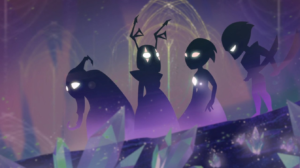 Light Fall opens to tragedy: a seemingly peaceful realm known as Numbra, characterized by a ubiquitous darkness, has seen smatterings of light. Narrated by Stryx, a retired/grumpy night owl warrior, players assume the role of a young boy (of whom has a great destiny, and whom will be referred to as ‘The Boy’ from here on courtesy of Stryx and spoiler avoidance) over four-story acts. Together, The Boy and Stryx set out to investigate why Numbra has suddenly seen the beginnings of light and the lethal crystals that follow its wake.

Their quest sees them seeking out the celestial gods that oversee the world to aid Numbra’s plight. Although Light Fall’s narrative may come across as trope and cliché-ridden, there’s still a bounty of lush narrative detail that can be found in the form of the game’s collectibles. Thus, while the game doesn’t actively wish to push any storytelling boundaries or subvert any of the structures that have come to define the genre, its narrative is intriguing enough to warrant an advance beyond levels to see what comes next, and adds a personal touch in installing Stryx as a narrator that never quite leaves The Boy’s side.

While the narrative does neatly place itself among others you’ve played before, the aesthetics of Light Fall certainly aid in cultivating a uniqueness. There is something striking about the subtle detail incorporated here. I found myself in awe of the game’s pastel landscapes, which boast monumental backdrops whilst also being dotted with crisp, minor details such as blooming flowers and scattered glitter. Despite the relative swiftness one travels throughout each Act’s levels, such details do not go unnoticed. Of course, the ambience created by these levels would not exist without the equally gorgeous score that motivates you from the easier beginnings to the tight spots that take a few repetitive — albeit sometimes irritating — tries to complete.

Speed is the name of the game here – daring, exciting, pure, fantastic speed. The Boy powers through levels by performing various moves to make it through the dangerous terrains of Numbra. The core mechanic of this game is the ability to conjure the Shadow Core. The Shadow Core is a metallic box that can be summoned instantly, on ground or airborne, and can be summoned again three more times until it has exhausted its quota. Its abilities are completely refreshed, regardless of what number of summons the box is at, once The Boy has touched natural ground. The basic use of the box to overcome environment is the primary means of movement within the game, and works well with the level design implemented, with various environmental dangers forcing the player to rely on the Shadow Core’s presence. 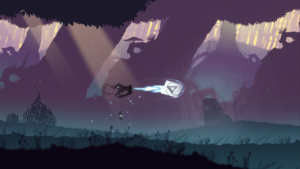 Other mechanics include the ability to move the Shadow Core to possess specific objects and devices, and the ability to hurl it at enemies and objects to progress through the levels. Though all possessing different functions, the mechanics of the Shadow Core are evidently familial in their smoothness. However, there were times when performing these mechanics almost felt laggy, with some inputs seemingly taking a moment to set in (and by the time the Shadow Core does spur, The Boy is usually body deep into a ravine of crystals). Regardless, Light Fall is a challenging title; the difficulty does ramp up considerably after the first few stretches, and as a result, complete compliance by the controls is a necessity. Still, it’s undeniable that most instances see gameplay characterized by a smooth fluidity, a testament to the effort that has been put into this title to achieve its speed-running prowess.

However, it’s this very flow — or rather, this same overriding desire to continue facilitating the flow generated by mastering the Shadow Core — that caused me to miss or simply not care about collectibles and the respective challenge in obtaining them. This is the price of speed: in being given the power to approach levels with a generous amount of freedom, it’s easy to get carried away with making it to the end of the level, some of which do implement more testing sections. After mastering these strips, there’s greater incentive to move on as opposed to sticking around and teasing Numbra’s grim reaper again. As aforementioned, however, collectibles do reward players with extra (and, I should note, extensive) narrative details. Players who identify as completionists, challenge-seekers or simply enjoy piecing together fragmented lore will find a lot of extra value in taking the time to really explore Numbra’s landscapes.

In terms of hardware, while this reviewer hasn’t personally played this title on either PS4, Xbox One, or PC, it’s recommended that this title is approached on the Switch using an external controller, such as the standard wired or the pro. Using the joy-cons felt a little more restrictive dexterity-wise, though if you’re the kind of player who likes to be on the go with their Switch, there’s enough challenge and elective level structure that renders Light Fall an excellent game for those who want an extra bit of challenge on their morning or evening commute.

Many of this title’s initial reviews made a note that the difficulty of the final boss of the game bordered on ridiculousness, with the absence of save points present along lengthy level stretches spurring irritation. Bishop Games ameliorated this issue following these critiques. This review was completed after the patch was released and installed. Despite changes, however, those last stretches still feel significantly more challenging than those present in previous Acts, and the final boss remains disappointing, with this hero’s journey ending on a tepid note. This is exacerbated by length of the title itself, which is arguably its greatest flaw. The game’s main campaign is only four to six hours long, and while the story is engaging, it was disappointing to see it end on a sudden note. Moreover, there is little post-game content present to soothe this wound — though Speedrun and Hard modes are technically extras, they are available for players to access immediately.

Overall, Light Fall is a gem among the slew of 2D platformers that have become ubiquitous with indie and mobile gaming over the decade or so. In implementing adored storytelling structures and devices (it’s difficult not to warm to Stryx, The Boy, and their adventure) and pairing them with fluid motion to create an ample sense of flow, Light Fall is a worthwhile play. While it does have flaws, these inconveniences do not muddy most of the gameplay experience — however, it cannot go without saying that those looking for a more substantial gaming experience time and cost-wise should look elsewhere.