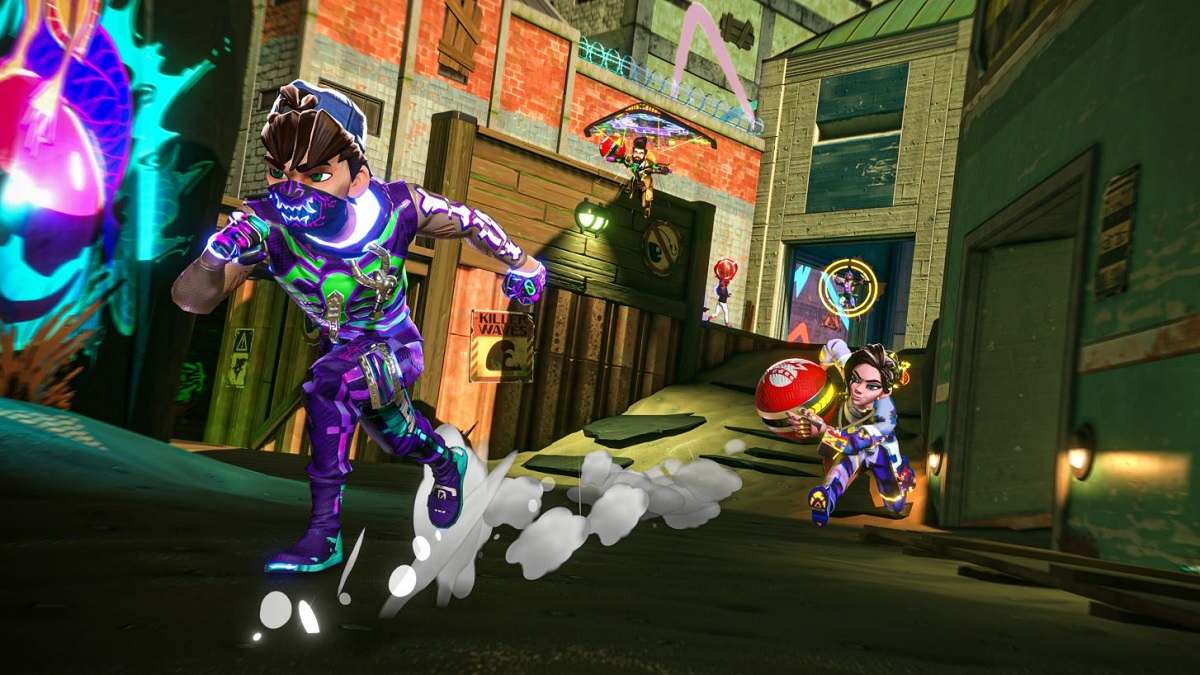 Entering the live service space is a massive gamble. Not only do juggernauts like Fortnite, Apex Legends, and Rocket League take up a huge amount of the market, but they’re actively trying to be the only games players engage with on a daily basis. Much like the other stand-out EA Original this year, however, Knockout City prospered by homing in on a unique idea and executing it expertly. Though it may have been difficult for indie studio Velan to carve out their own niche among giants, the fruits of their labor is evident: not only is Knockout City alive and well six months after launch, but it’s arguably the best live service game of the year.

The fundamentals of Knockout City strike the perfect balance between being easy to grasp but difficult to master. Anyone can dash around, catch incoming balls, and throw balls at enemies, but there’s a serious skill ceiling when it comes to perfecting all of these actions. Timing a dash just right too avoid a punish from end lag, consistently performing perfect catches, and knowing the exact moment to throw a lob or curve ball make all the difference and clearly distinguish newcomers from experienced players.

There’s plenty of room for players to grow, and Velan Studios has made the onboarding process as easy as possible. Be it a step-by-step tutorial that walks players through each mechanic or a hub that includes a designated area for automated catching practice, there’s never a lack of guidance. They’ve even recently rolled out bots for lower level players to get their feet wet before diving straight into the shark-infested waters of online matches.

No matter how strong and deep the core gameplay is, it’s worthless if the playerbase is dead. Many great live games have fallen off either due to a lack of exposure, failure to capture a wide audience, developer abandonment, or all three (I’m looking at you, Bleeding Edge).

Following the absolute bomb that was 2020’s Rocket Arena, EA learned from its mistakes and worked with everyone to get Knockout City in front of players’ eyes and into players’ hands. It first debuted–with a rather confusing, strange trailer–in the February 2021 Nintendo Direct before appearing in a State of Play just two weeks later. When it did launch, it went directly into Xbox Game Pass day one, giving it an instant playerbase. Shortly after that, EA made the full game free up to level 25, similar to the trial model used by Final Fantasy XIV.

Despite not gaining the traction of other major players in the live service space, Knockout City has had no shortage of promotion or access. Deals were struck with Prime Gaming over the summer and PS+ just this month, giving users of both platforms the opportunity to claim the ungated version of the game. Combined with cross-play and cross-save across all platforms, this has done wonders for keeping new players consistently joining the community. In the end, it’s all paid off; casual matches can almost always be found in 20 seconds or less no matter the time of day. Players are sticking around, and for good reason.

While Knockout City isn’t nearly popular enough to afford the large-scale seasonal changes titans like Fortnite implement, it’s no slouch when it comes to keeping things fresh month-to-month. Following the somewhat standard summer-themed first season, the last couple seasons have seen map alterations, new lore introduced, and some of the most creative customization options out there.

Even more impressive, each season has brought with it a special event. Following the seasonal theme of “A Night at the Movies,” the Superpowers mode completely changed the way Knockout City was played by giving players a randomized superpower at the start of every round/respawn. The temporary mode was so popular that it had to be brought back later in the season. Then there’s this season, Hacked, which has introduced new characters, map changes, and even something of a radio drama via unlockable audio logs that players earn as they progress through the season pass. All of these tweaks and aesthetic changes go a long way in keeping players invested.

The other things that keeps players invested, of course, are goals and rewards to work towards throughout the season. To that end, Knockout City rivals Splatoon in its emphasis on fashion and player expression. The creativity on display is shocking, with looks ranging from streetwear to skeletons to crash test dummies and everything in-between. You can customize just about every part of a character’s appearance, and every single outfit comes with three variations that can be unlocked with a secondary currency called style chips. They even give you three character slots to experiment with and swap between.

Far more is available than just clothing, however. By emphasizing intros, outros, and MVP poses prominently at the beginning and end of every match, players get to show off their spoils and express themselves (or the characters they’ve created) with a multitude of slick animations.

In short, Knockout City offers a range of items that people actually want to buy, including cool cosmetics from classic EA IPs like Dead Space and Mirror’s Edge. And this is to say nothing of the fantastic job Velan has done regarding inclusivity, including diverse hair styles (there’s more than just an afro or fade for once!) and player/crew icons celebrating different holidays and heritage months.

Of course, there are many titles that offer enticing cosmetics that get players to reach for their wallets. What separates the best live service games from the pack, however, is how they handle their monetization strategy. One might expect this point to be a negative considering EA’s history with microtransactions in their FIFA and Madden series, but this couldn’t be further from the truth; Knockout City is one of the most generous live service games on the market.

The cash shop rotates through new items daily that can be purchased using holobux, the in-game currency. This can be either bought using real money or earned in-game via sign-in bonuses, leveling up five times in the free battle pass, and completing milestone challenges.

In other words, it rewards frequent players without falling into the “it’s earnable, but only after dozens of hours” hole. The introduction of a premium paid battle pass in season three caused some initial worry, but since it can be purchased with holobux and players earn more than the purchase price by completing it, it’s quite a good deal by industry standards.

EA’s Knockout City has had a banner first six months since its launch back in May. From a strong critical reception to smart battle pass implementation and continued adoption across multiple platforms, it’s earned its spot alongside It Takes Two as one of the best multiplayer experiences this year. Its long-term health a year or two down the line remains to be seen, but it’s safe to say that 2021 has been incredibly kind to this passion project.