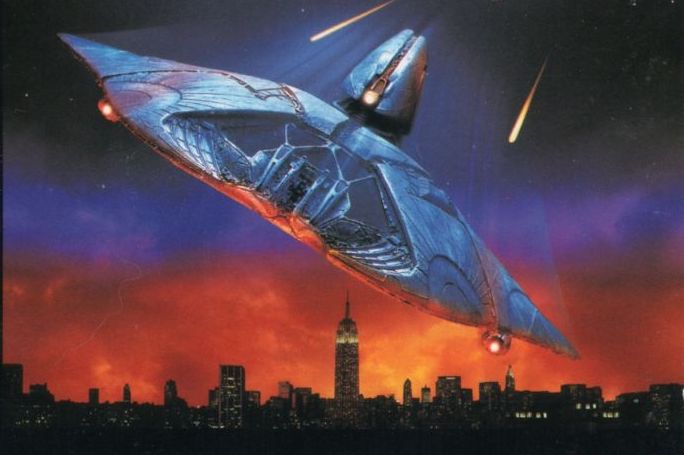 Any average gamer would be forgiven for not knowing Independence Day even existed in game format. And, like most adaptations, it’s safe to say that the movie version is infinitely better. Released in 1997 and developed by Radical Entertainment, Independence Day met with low to middling reviews at the time with an average rating of 5 out of 10, though IGN very harshly gave it 0. That means Independence Day was barely passable in its own time, and we’re now twenty-five years on, so… To be fair, some titles age better with time if they have some special charm or otherwise redeeming quality about them, but Independence Day isn’t one of them.

The plot veers in a slightly different timeline from that of the movie, taking place after the infamous canyon chase scene, but is otherwise more or less similar with the same alien-destroying tendencies. The final mission takes place in the mothership in that same stolen alien craft, without however the voice of Jeff Goldblum talking himself silly in the background.

Unfortunately, the mission structure is tarnished by repetitiveness. On the face of it, there are varying objectives, but really it’s just the same thing over and over, except in different cities (Las Vegas, Washington D.C., Moscow etc.): take out the shields and generators on the alien capital ship, whilst fending off alien fighters. Repeat. What’s more, the story can be completed in the short span of one to three hours. Fine if you aren’t a flight combat fan and just want it over with. Not fine if you’re anyone else who’s expecting a reasonably satisfying run. The squad commentator announcements get overly repetitive, carrying on telling you to blow up the generators. Like, okay, we get it … That being said, there is an old-school high score screen following the completion of each level – strangely satisfying for any modern gamer, like viewing a strange relic from the past, which is after all what Independence Day is.

On the plus side, the giant ‘City Destroyer’ alien ships loom large over every level, serving as an ever-present threat and convenient map upper boundary limit in place of the arbitrary restriction of invisible walls, common in games of the time. Likewise, the ships have forcefields in place on the edges of the map to stop the player going out of bounds horizontally. There’s also a cool countdown level over system whereby if the mission time limit reaches zero, the City Destroyer will power up its energy beam and fire, ending the level, which is a good way to bring in one of the most feared aspects of the film. The developers could have just taken the easy way out and gone for a straight game over screen.

The combat itself in Independence Day is nothing to write home about, being dog standard at best and nothing special when it comes to combat flight simulators. Ace Combat this is not. The machine gun doesn’t seem to work against enemy craft and the lock-on system is frustrating to get a grip of, yet oddly seems to work at the best of times. Meanwhile, there are up to eleven unlockable aircraft, but none of them feels too different from the stock one.

One standout problem with Independence Day, which is the main gripe IGN had, is the unrealistic physics. In most other similar games, and indeed in real life, crashing headlong into the ground or a cliff would usually result in a crash, a destroyed aircraft and more often than not a pilot fatality. Not so here. Apparently, fighter planes can survive high-speed impacts against solid surfaces and remain intact. When it comes to technical aspects, the sound effects are the one redeeming factor, in spite of the complete absence of any music. The whoosh and engine noises work wonders on the ears, and the sound of the laser-fire from the alien ships is perfectly replicated.

So, yeah, the gaming rendition of Independence Day doesn’t have an awful lot going for it these days. By most accounts, the two-player mode is meant to be a little better, but have fun finding someone willing to play it. And even then, what game isn’t more fun with a friend? Still, fighting off alien invaders is never a bad thing, and it’s good practice for when the time comes. Unfortunately, like Earth’s cities beneath the giant alien ships, this version of Independence Day will forever remain in the film’s shadow.