It’s not hard to find recipes for foods from your favorite TV show, movie, or video game. Online collaborative cookbooks are everywhere these days. It’s safe to assume the recreation of most legendary pop culture dishes have been posted somewhere if you have a look. What’s far less common – especially in video games, – is for the creators themselves to develop an official cookbook for their franchise. So when the folks at Bethesda began selling Fallout: The Official Vault Dweller’s Cookbook, written by longtime recipe creator Victoria Rosenthal of Pixelated Provisions, it’s worth taking notice. 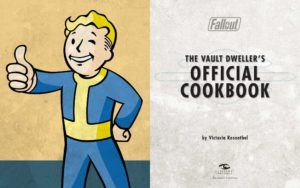 Licensed art, logos, and trademarks. Not a sight too often seen

It’s clear with just a skim that this cookbook is the real deal; a heavy dose of Fallout theming paints over every page. Recipes are written as though they were made by Vault-Tech scientists, with notes scribbled in the corners by a wanderer trying their best to recreate them without ever having seen a mushroom that didn’t glow. Recipes include stat bonuses and references to various wasteland ingredients, which gives each page an amusing take on otherwise serious instructions. Vault-Tech entries are written with the same delightfully deranged humor they are in the games, and the wastelander’s snarky comments and disturbing substitutions make the recipes as entertaining to read as they are informative. 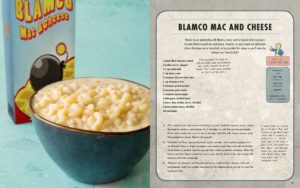 This looks a lot better than mine

Perhaps even better than the added fun from reading a recipe written by a soulless technician is how it doesn’t interfere with the recipes themselves. Often recipes based on fictional properties aren’t so good at explaining what the final meal is or get too cutesy with aforementioned creativity. Following and completing the recipe can be difficult when you don’t know what “Gagh” is and there isn’t even a picture to help you out. The Vault Dweller’s Cookbook get solemn when required. The title for a meal might be “The Captain’s Feast,” but it’s written in the corner while the book helpfully prints “Roast Prime Rib” underneath. Though the immersion of making strange foods is broken, it’s important to make the cookbook actually useful before making it enjoyable to read. It’s clear on every page what is actually supposed to happen behind the façade of cooking a Yao Guai. 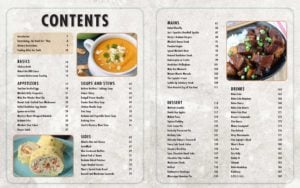 The book is also organized beautifully. An established organizational format for recipes in cookbooks doesn’t exist, which means they run the gamut as far as what is placed where and why. Sometimes food is organized by ingredient, sometimes alphabetically, and sometimes some sicko decides to write theirs with no discernible order at all. The Vault Dweller’s Cookbook separates the recipes into where they fit on the dinner plate; it features categories such as “mains,” “appetizers,” “dessert,” “drinks,” and more of the like. This makes it easy to arrange your dining Fallout experience how you want. If you want to find the centerpiece for your next meal, the appropriate recipes are all in the same place for you. If you want a light snack or a side to go with something else, you can check the “appetizers” or “soups” and choose from there. There’s no huge roast recipe followed immediately by a drink because they’re both good at dinnertime, and there’s nothing stopping you from picking different recipes from all over the book to create a complete meal. 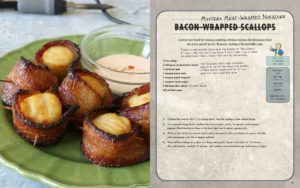 As mentioned earlier, the Fallout coating to the book doesn’t interfere at all with reading and following the recipes themselves. Unlike organizing the book itself, the format for these are pretty standard: a list of ingredients followed by a list of instructions with a picture to the side showing what it’s meant to look like. It’s not clever or flashy, but every cookbook is written this way for a good reason. A little more extra info – such as cooking time and servings – is given with each recipe as well, an extra help in planning out the creation of a meal. The only big exclusion that might have been welcome is a warning that special equipment might be needed upfront. Reading through the recipe before making it is important regardless, but it’s easy to forget until it’s too late that you don’t own a mesh strainer and your lemonade is going to look a little more like a smoothie. A little warning next to the ingredient list would be nice.

It is also here in the recipes themselves that The Vault Dweller’s Guide runs into its major pitfall: Fallout doesn’t really have a lot of iconic food. It’s a series where consumables are either premade dinners like InstaMash or drugs like Buffout, with very little reminiscent of food that anybody would feel compelled to recreate. Most of the dishes found in the book have only been seen in the games themselves as flavor text or offhand remarks, if they exist in the universe at all. It’s a necessary step in order to write a cookbook that isn’t full of frozen dinners, drinks, and drugs. Still, biting into a goat curry that just happens to be named after Radstag Stew, a low-rez model that you almost certainly never gathered the ingredients to make, doesn’t really fill you with warm Fallout nostalgia. 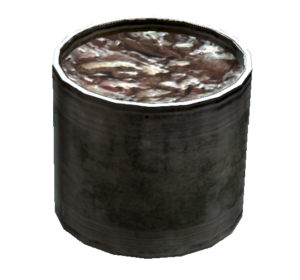 I’m not an expert chef by any stretch of the imagination. I can’t say why adding carrots to mac and cheese is a bold step that enhances flavor in pioneering ways. I don’t have a godly palette that can identify specific spices and why they blend so well together. What I can do is explain the process of following those orders, and how the meals that I prepared turned out being made from an amateur. 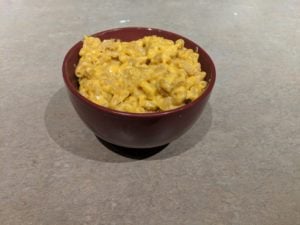 I’m also not a very good photographer. Not that whole-wheat macaroni is super photogenic anyways

From this standpoint, the food in the book is pretty dang tasty and the recipes are for the most part easy to follow. I made a few things from the book myself and through every step the instructions were clear and the results were delicious. Most recipes have an extra element or two that separate it from the standard practices in other recipes. The InstaMash, for example, includes a healthy helping of blue cheese, not something you would attempt unless explicitly told so. They’re interesting takes on classic dishes, but once again it’s not like InstaMash has a reputation for tasting of blue cheese in the games. It forms a great meal, but not really a Fallout meal. 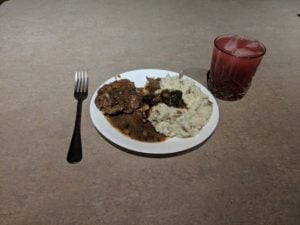 Saddle Up Salisbury Steak and InstaMash, washed down with some of Deezer’s Lemonade. Looks a little messy, but tasted delightful

The Vault Dweller’s Cookbook is not something you should pursue if you’re looking to recreate fond Fallout memories. The food itself has at best a passing familiarity with the food you’d find in the wasteland. Even the recipe for Nuka Cola admits it doesn’t strictly follow what little details the games have provided. What this cookbook is, however, is a well-made cookbook with tasty dishes and a delightful Fallout coating. The recipes are interesting and varied, made with clear instructions and a pinch of humor in the writing. It would serve any wanderer well in the wastelands of culinary competence.