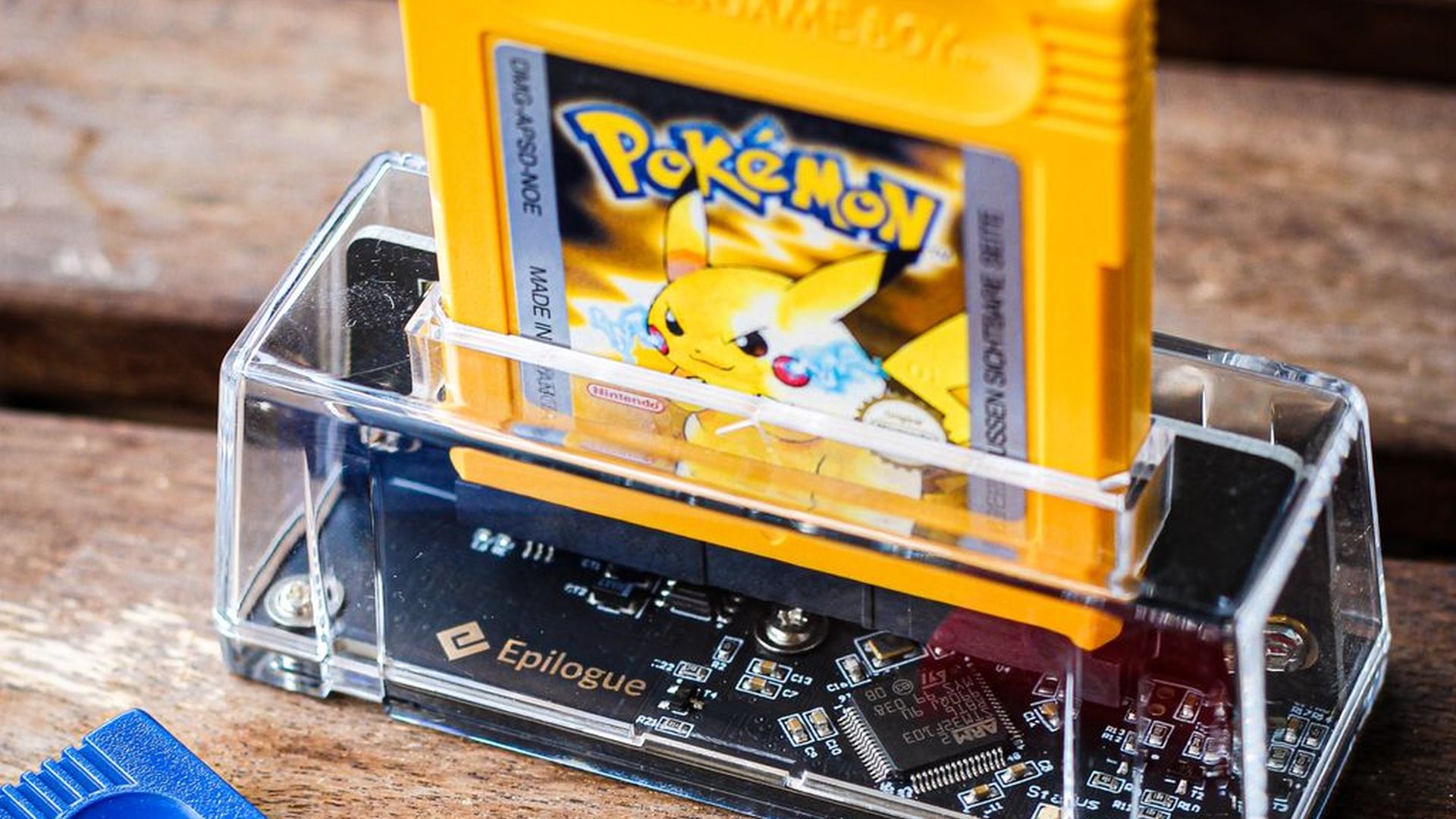 The GB Operator is a device that I have been anticipating since its announcement, and its release has proven to be spectacular. It only took seconds for me to be blasted with years of nostalgia and amazement as I booted up my childhood cartridge of Mario & Luigi: Superstar Saga on a MacBook Pro with an Xbox One controller. All those early morning carpools, afternoon bus rides, and late nights of laying in bed were beamed back at me in a pixel-perfect resolution with a maximum amount of personal comfort. As someone who grew up during the early 2000s, the newest Game Boy and Game Boy Advance player from Epilogue is a modern dream come true. One that is almost too good to believe.

I kept my expectations in check, but after examining the device’s capabilities for hours on end, there is no doubt that the GB Operator is a lovely piece of hardware worth the price for all Game Boy players and collectors. Despite the fact that it is currently in its beta state, it would be a slap in the face for anyone still deep in the handheld ecosystem to not pick up this device. Whether you are a fan still collecting cartridges, a veteran yearning to dig into your old childhood catalog, or a potential future programmer, Epilogue’s GB Operator will no doubt suffice your insatiable appetite for modernized ways to play with the Game Boy family of systems.

For those unaware, Epilogue’s GB Operator is a device that can play and manage physical Game Boy cartridge data on Windows 10, Mac OS, and Linux x64. Looking at its exterior before technicalities, the GB Operator presents a classy crystal-clear covering around a single cartridge slot you would find on any ordinary Game Boy. The device is simple, small, and compact; almost the size of three Game Boy Advance games put together. It is fool-proof to use as it requires only one USB port and a software installation from Epilogue’s official website. After a set-up process that can literally take seconds to complete (depending on download speed), users will be ready to revive their physical collections in a new light.

At its core, the GB Operator is a multipurpose docking station for the Game Boy family of systems. It is intended to entertain and — as the name implies, operate. For those who have wanted to play their favorite retro handheld Nintendo games with a controller, in a higher resolution, and on a larger screen, this is the option you have long waited for. Veteran players looking to back up their childhood save files are given their dreams. Programmers looking to begin porting their own projects onto the classic hardware can instantly get cracking. Whether you are here for gaming, archiving, or even developing, the GB Operator serves justice to all of its promises as it opens a gateway into the Game Boy family’s extensive library. It intertwines emultation and physical replication magnificently.

There is no need to worry about latency or graphical issues because the GB Operator perfectly manages to replicate its original hardware with a multitude of benefits. When it comes to playing games themselves, physical cartridge data is being emulated through the software flawlessly. Not only are the games buttery smooth and upscaled in resolution, but visuals previously affected by the Super Game Boy and Color system models for select titles have even kept their special palettes intact. The device offers the best possible visual and playable version for its library. It practically acts as a suped-up version of the Super Game Boy and Game Boy Player peripherals — except some of those devices’ features are coming in a future update, but we will get back to that.

As to be expected, Epilogue’s GB Operator works with a vast array of modern controllers. Unlike other emulation software, I thankfully never found myself having trouble when connecting wired and wireless peripherals. I used an Xbox One and Wii U Pro Controller during my game sessions, and both devices worked like a charm as they had no problems connecting and running via Bluetooth. Additionally, instant button remapping is made convenient for all players. As most controllers do not follow the traditional A and B button placements Nintendo first created, the GB Operator’s main menu allows users to immediately remap their connected devices before jumping into a play session.

The GB Operator overall has a lot to offer within its main menu outside of playing games. On top of distinctively indicating what region the cartridge comes from and brief information about the inserted title, the main menu informs users whether or not their physical game was produced by Nintendo themselves. While this may seem like neat nuggets of detail for players, this inclusion is a blessing for collectors who are concerned with identifying the legitimacy of a cartridge. For those also looking to build a digital library of their collection, the device provides users with the option to download legal ROM dumps of their games. While the GB Operator can not play these files, they can be used on other third-party emulators.

What is really promising though about the GB Operator’s companionship with its library of games is the fact that the device has created a Nintendo Switch-like solution for its line of systems. “Save states” can be created through the device. If you are in the middle of a game and would like to continue on your original Game Boy hardware, you can simply create a save state when exiting the game. Rather than having to restart from where you left off, the second you boot up the cartridge on a portable system, the game will load to where you last exited. This is by far the closest way Game Boy games will go from docked to on-the-go play efficiently.

Working Its Way Around

Regarding save files and more importantly for many players, the GB Operator offers users a way to create digital copies of their saves and upload them back to a cartridge at any given time. It quite literally takes less than four clicks and a minute to both import and export save files between a computer’s hard drive and a physical cartridge. Not only does this open a backdoor for developers looking to program games on official Game Boy hardware, but it allows everyday users to archive their save files — or perhaps even upload emulated ones to that of real software.

For example, for Pokémon fans who have been sitting on emulated and twenty-year-old saves, the GB Operator provides a convenient way of dumping your digital files onto legitimate software. Never again will you have to fearfully boot up your Game Boy to check if your copy of Pokémon Yellow has given out or think about how you would love to have that rare shiny found on an emulated file of Sapphire be part of your team in Sword and Shield.

Speaking of Pokémon, an experiment I specifically wanted to test with the GB Operator in regards to gaming is how particular cartridges would function with the device. From Japanese imports to bootlegs and retro-revivals, Epilogue claimed that every type of Game Boy cartridge was compatible with the GB Operator. The company has stayed true to its word but has also perhaps created a bonus oversight for users. Epilogue never has seemingly recognized how cartridges with dry batteries would be affected by the GB Operator’s resort to emulation. The results I found were extraordinary.

For readers who have faulty Game Boy Advance batteries within their games — such as all five of the generation three Pokémon titles –, you will be happy to know that the device overrides the start-up internal clock issue. Due to its emulation capabilities, the GB Operator can completely disregard this particular battery problem that exclusively pertains itself to select cartridges featuring real-time time aspects. As someone who has always feared ruining their childhood cartridge when replacing a dry battery, this workaround is an admirable relief.

The one major feature that will be unavailable for most users, however, is the “PHOTOS” tab. While I could not access this feature myself, Epilogue claims that this aspect of the device will allow Game Boy Camera owners to export their photo albums. It also could potentially be utilized as a fun face camera option for applications such as Zoom in the future. It may go unused for a vast number of users, but the GB Operator’s connectivity to the photographic add-on just goes to show how dedicated Epilogue is to make their device the ultimate Game Boy compendium.

The only real gripes users will have with the GB Operator is the fact that its LED light indicator can be rather bright, fast-forwarding options for games are not available, and there is currently no resolution or border adjustments in the settings. However, these complaints are all being patched in with the next big update. As of today, the device is only in Beta 0.7.1. While it may be missing quite a few notable features that most emulators have, these accommodations are confirmed to be coming soon in Epilogue’s roadmap.

Epilogue as a whole deeply cares for its fans and shares an understanding as to why its niche device will be monumental to so many of its adopters. It is not just a machine that will be used to relive childhoods in high-definition: it is a game-changing piece of inexpensive hardware for the retro market. The device is being used to preserve the past and create a future for players who continue to fondly gaze upon the wonderful libraries of Nintendo’s first handheld family.

In a time where Game Boy and Game Boy Advance prices are flying through the roof, Epilogue’s first retro emultation device is a shining knight. The GB Operator is a gloriously efficient way to relive your childhood or begin collecting legitimate Game Boy family cartridges as it triumphs above the masses. It is the ultimate way to play the Game Boy catalog on a larger screen. With a promising roadmap laid out ahead, there is no doubt that Epilogue will continue to march upon their victory road to greatness. If you love playing Game Boy and Game Boy Advance games today, you absolutely need to order the GB Operator before it might be too late — don’t regret it.

Editor’s Note: A GB Operator unit was provided to us by Epilogue.