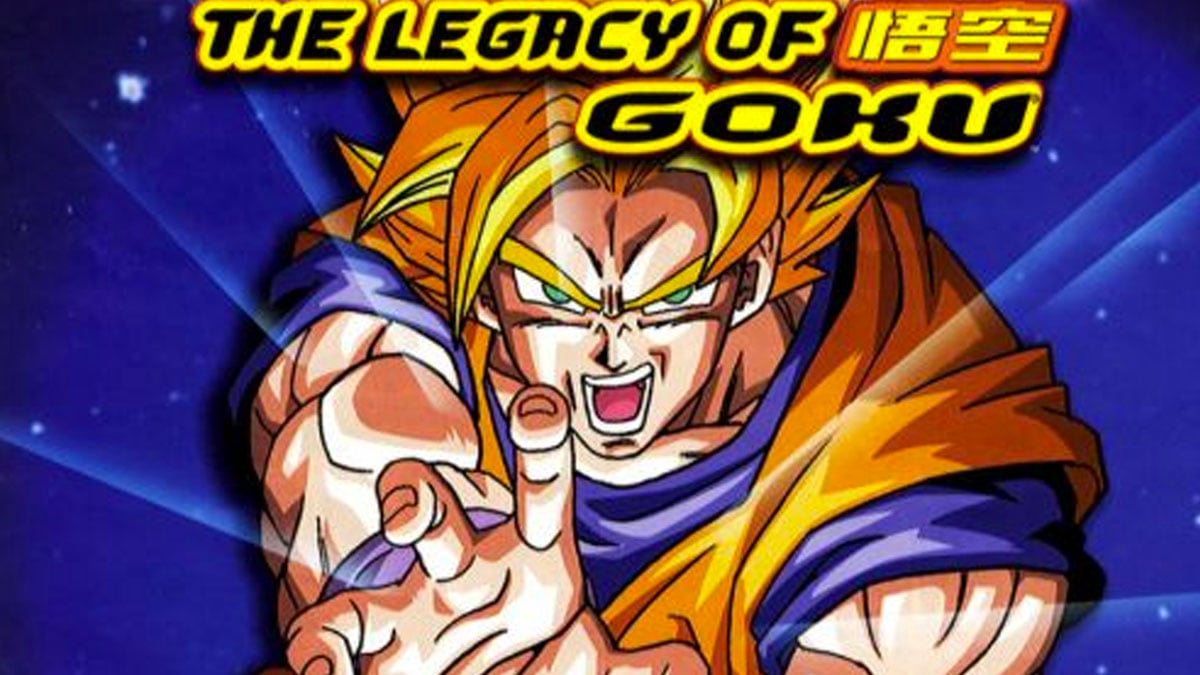 2002 was a big year for the Dragon Ball franchise in North America. The original Dragon Ball anime was in the midst of adapting the Red Ribbon Army arc, Dragon Ball Z made it halfway through its final arc, Legendary Super Warriors adapted all of DBZ into a deck-based RPG for the Game Boy Color, and Budokai 1 captured the spirit of the anime in an endearing — if rough around the edges — PS2 fighter that fans still look back on fondly today. Then there’s The Legacy of Goku, a Game Boy Advance action RPG that butchered its source material and squandered its genre’s potential in an incredibly formative year for Dragon Ball. A one-two punch if there ever were one.

To say that LoG does not capture the action-packed energy of Dragon Ball Z would be an understatement. Gameplay is made up of mundane side quests — find the egg, find the rocks, find the porn — with painfully stiff controls that fail to emulate the series’ elegantly choreographed action in any meaningful capacity. Poor game feel is one of Legacy of Goku’s biggest problems. Goku is just not fun to control. His movement is stiff, arbitrarily locked to four directions. Coupled with poor hit boxes on most enemies, this makes combat feel frustratingly imprecise. Goku’s punches don’t always connect when or where they should, whiffing too many for comfort.

It’s a pity, because the bones are there for a fairly engaging experience (something The Legacy of Goku II and Buu’s Fury prove outright). Goku should be able to string combos together with his punches. He should be able to comfortably keep enemies away long-range with Ki attacks. You, the player, should feel powerful playing as someone the game acknowledges as supremely powerful. Instead, Goku spends most of the early game dying to woodland animals seemingly made of katchin. Poor enemy AI doesn’t help matters either, battles devolving into vaudevillian chase scenes even in boss fights. There’s little need for strategy beyond basic hit & run tactics and being the right level.

Which makes everything doubly frustrating because LoG’s RPG are not particularly well integrated. Enemies do not drop enough experience to properly level Goku through natural gameplay. You will need to stop and grind in order not to get slaughtered by a few measly hits, but the fact you can’t cross reference any stats other than Health or Ki makes character progression feel far less satisfying than it should. You can’t track how you’re getting stronger, only that you are. Too much grinding, however, leads to the opposite problem occurring. Hit the right level and nothing is a challenge. Gameplay becomes a mindless slog that requires little skill to play.

There’s nothing wrong with an easy difficulty curve so long as the gameplay is still engaging, but The Legacy of Goku is too static and one-note to carry its admittedly short playtime. Levels mean too much for progression while contributing nothing to the gameplay loop’s evolution. The two techniques Goku can learn are simply variations on the Ki attack. The Solar Flare has the added benefit of stunning enemies on contact, but it’s also the only true missable in the game. There’s no equipment to modify your base stats, no signs of change to signify your growth — Goku at the end of the game is fundamentally the same as he is at the start, which makes him a bland protagonist to control.

Part of the RPG genre’s fun is raising a character to their full potential, but that needs to be telegraphed in some way beyond just a number to have meaning. Unlocking new moves for Goku is a step in the right direction, but it isn’t enough when one can be skipped and the other is just a better version of a technique you’ve been using all game. This makes gameplay feel like you’re just going through the motions. There’s no real difference between fighting a wolf or a soldier, Raditz or Freeza. They’re all the same shade of poor enemy design.

LoG’s level design unfortunately doesn’t fare much better. The art direction does a generally good job at replicating the anime’s aesthetic, but the actual level geometry leaves much to be desired. Areas basically explore themselves, leaving little room for secrets in your vicinity. Not that there’s anything to collect aside from fetch quest nonsense. Progression plays out more like a level based game than it does a traditional RPG. There’s no overworld and areas are not connected to one another. Instead, the story transitions you to the next set piece whenever you wrap up each section’s main objective.

A big problem is that the vast majority of areas are simple fields. All the forests Goku explores during the early games are fields. Snakeway is a glorified hallway while HFIL is yet another open field. Namek is also, as expected, mainly just fields, but it at least has the game’s sole dungeon — the Namekian Temple. Sadly, the Temple consists of a lackluster teleport puzzle and tracking down a few artifacts left (not hidden) in plain sight. Even at its most engaging, the level design can hardly be called gripping.

For what it’s worth, The Legacy of Goku isn’t all bad. The game’s overall presentation does deserve some credit for its appealing spritework and surprisingly atmospheric soundtrack. Ariel Gross’ mostly original score does a good job at injecting the game with a unique sound — not necessarily one that encapsulates Dragon Ball, but one that serves the gameplay well. Areas may not be fun to explore, but Gross’ blue and moody music is always a joy to listen to.

Ariel Gross’ underrated soundtrack and some quality sprites tragically can’t undo the game’s insult to injury — the story. As far as adaptations go, The Legacy of Goku butchers the Saiyan and Freeza arcs. And that’s putting it lightly. So many things are lost by changing the narrative to be told exclusively from Goku’s perspective. Despite being the main character, these two arcs are when Dragon Ball began genuinely experimenting with its ensemble cast. To strictly follow Goku defeats the purpose of adapting any part of Dragon Ball Z to begin with. Goku very much remains the protagonist in the source material, but just as much focus is spent on developing his son, Gohan — who ostensibly functions as DBZ’s deuteragonist for the rest of the series.

Naturally, all of that is lost in the game. You can count the number of times Gohan appears on-screen on one hand. All of his character development is skipped, which in turn deprives Piccolo of his character arc. Yamcha, Chaozu, and Tenshinhan all die off-screen; Piccolo dies off-screen and is never resurrected on-screen; Vegeta dies off-screen for some reason even though he’s supposed to die in front of Goku, depriving LoG of an incredibly important character moment. The entire first half of the Namek arc simply does not happen as that part of the story was primarily told from Gohan and Vegeta’s perspectives, which has the unfortunate consequence of contextualizing nothing about the conflict on Namek — giving you little in-game reason to care about what’s happening.

Part of the fundamental issue with The Legacy of Goku is that it is neither fun enough for anyone unfamiliar with the series to keep playing, or familiar enough for fans to stay invested. On its own, the game is an incoherent mess about a man whose son gets kidnapped, goes to heaven, comes back to life, and then goes to space. The glue that actually makes this narrative compelling is missing. The supporting cast is all but absent. The themes of class and heritage that lightly run through both arcs are completely glossed over. Goku doesn’t grow or change, his hair just turns blond at the end. What should be the main character accepting who he is before the climactic final battle is reduced to just a dye job.

In an amazing year for Dragon Ball, The Legacy of Goku sticks out like a sore thumb. The series was arguably at the peak of its popularity and as one of the best selling games on the Game Boy Advance, many fans’ first Dragon Ball game was likely LoG. This prospect becomes even more horrifying when you realize LoG was the first DBZ game released in 2002, beating out the original Budokai by over half a year. There’s nothing quite like the disappointment of expecting a proper action RPG based on one of your favorite shows and getting shovelware that can be completed in an afternoon instead.

As bad of a first impression the game makes, The Legacy of Goku’s legacy is ultimately a positive and almost inspiring one. Both The Legacy of Goku II and Buu’s Fury manage to successfully address their progenitor’s main problems. The playable roster expands from just Goku to a main cast of five, each character with their own unique stats and techniques. Fields are expanded into proper dungeons that tuck away actual secrets that require observational skills to track down. Diagonal movement and updated enemy AI makes battles far more engaging, even if they’re still simple to the core.

It’s interesting to take a look back at the shallow start to what’s otherwise a solid trilogy of action RPGs that adapt all of Dragon Ball Z for the Game Boy Advance. That’s an impressive feat on concept alone. Revisiting The Legacy of Goku so long after the fact does the game no favors, however, especially when its sequels outdo it on every conceivable level. The only real incentive to checking out the original Legacy of Goku is to gain the perspective needed to best appreciate its sequels. As true today as it was in ‘02, Dragon Ball Z: The Legacy of Goku is one of the worst RPGs on the Game Boy Advance.