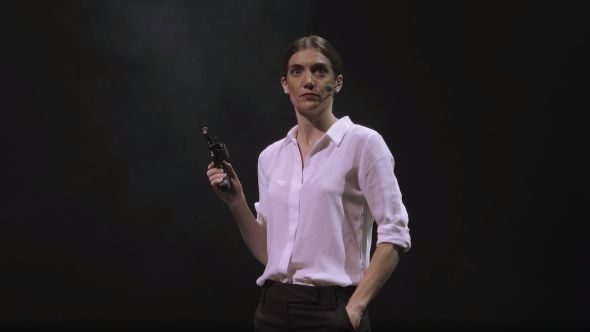 Every year the inevitable discussion following the E3 conferences is who “won” the show. Thousands, or possibly millions, of gamers will tally the different presentations, weighing factors like showmanship, reveals, trailers, and demos to determine an overall winner, a point that will likely be argued until approximately the start of next years E3. This years winners, most people agree, come down to either Nintendo’s incredibly strong, although short show or Microsoft’s tech-filled Xbox One X reveal, both showing off a lot of exciting new games with great trailers and demos. Yet hiding in the shadow is a show that not many people watched, fewer understood, and yet may not have just won E3 in 2017, but may be the greatest E3 show ever.

Devolver’s show began with a short pre-show featuring introductions from both What’s Good Games and Funhaus with the former remarking “isn’t Devolver just fucking indie games?” before logging off the stream, and the latter talking about how Devolver would kick them out of parties before grabbing alcohol to get drunk in addition to referencing games Devolver doesn’t make. So we were off to a weird start before the show even began. Self-deprecating humor isn’t anything new for these conferences, even EA takes shots at themselves from time to time, so none of this was totally out of the ordinary. But the true weird was just moments away.

Not many other E3 conferences feature this much on-stage violence.

The “conference” started with a Devolver splash screen featuring the subtitle of “Tomorrow’s Unethical Business Practices Today!”. We were then treated to footage of a crowd in a stadium, not unlike how every other conference starts, while our hostess, Chief Synergy Officer Nina Struthers walks out on stage to calm the crowd down. Then she pulled a gun and fired wildly into the air while commenting on the professionalism of video game journalists. About this time the true madness started to bleed through, as it became clearer that the “crowd” was just stock footage, footage repeated several times throughout the show. The insanity kept spinning out of control, with the show taking place at the “Dave Lang Memorial Centre” (I could only find one thing related to whoever Dave Lang is) and the camera changing every time Nina said the word “very” which she did a lot. This was about three minutes in, but it only sped faster into hell from there.

The entire 15-minute show is akin to one long Tim and Eric sketch, or something dredged up from the depths of Adult Swim in the wee hours of the morning, spiraling uncomfortably into darkness with the jokes becoming more and more surreal as time goes on. From people clapping at Devolver’s obviously unethical business practices into a man losing his arm on stage in a fountain of blood and gore, to the reveal of “Earliest Access”, a program that lets players play games the second the developer thinks of the concept. Throughout the show, Nina regularly threatened both the audience and the viewer with physical harm while spitting random, nonsensical buzzwords and making up tech concepts. Finally, the show reaches a fever pitch with Nina starting to bleed heavily from the nose while a blood-drenched man taps away on a keyboard, with the crowd growing more and more frantic until Nina’s head explodes a la Scanners.

One of the few games Devolver actually showed, the highly anticipated Ruiner.

Despite all of this, the showcase of Devolver’s titles in the upcoming year section of the show sort of fell flat. All it showed was a trailer for Ruiner as well as a trailer for Serious Sam: Bogus Detour. To their credit, both games look amazing, but only two games in an entire show is incredibly weak. But Devolver’s show wasn’t about the games or the trailers, it was about making fun of everything else. Within the biggest gaming show of the year, Devolver essentially brought a mirror into E3 in which to say “this is how stupid you look”. The entire show was a nightmare parody of E3 with nothing safe from their blazing gaze.

Here’s a shortlist of things that were made fun of during the show:

Even the post-show discussion panel (confusingly labeled the “Pre Pre Pre Show” even though it aired following the convention) was a parody of things like IGN or Nintendo’s Treehouse presentations, showing off fake games and a surprising level of violence. The entire thing was a blissful mess and a breath of fresh, drug-filled air. People often complain that every year E3 gets worse and worse, with companies losing touch with what gamers want and turning the entire thing into a big spectacle to distract us into pre-ordering games. To a degree, this show was Devolver’s way of saying “Yeah, we get it too.” Devolver’s show was a nightmarish vision of an E3 not too far off and a show that’s not impossible to imagine actually happening (sans the exploding heads and missing limbs). Unfortunately, it seems like almost no one actually watched the show, but you should because it’s certain to be a show that’s talked about for all the right reasons.