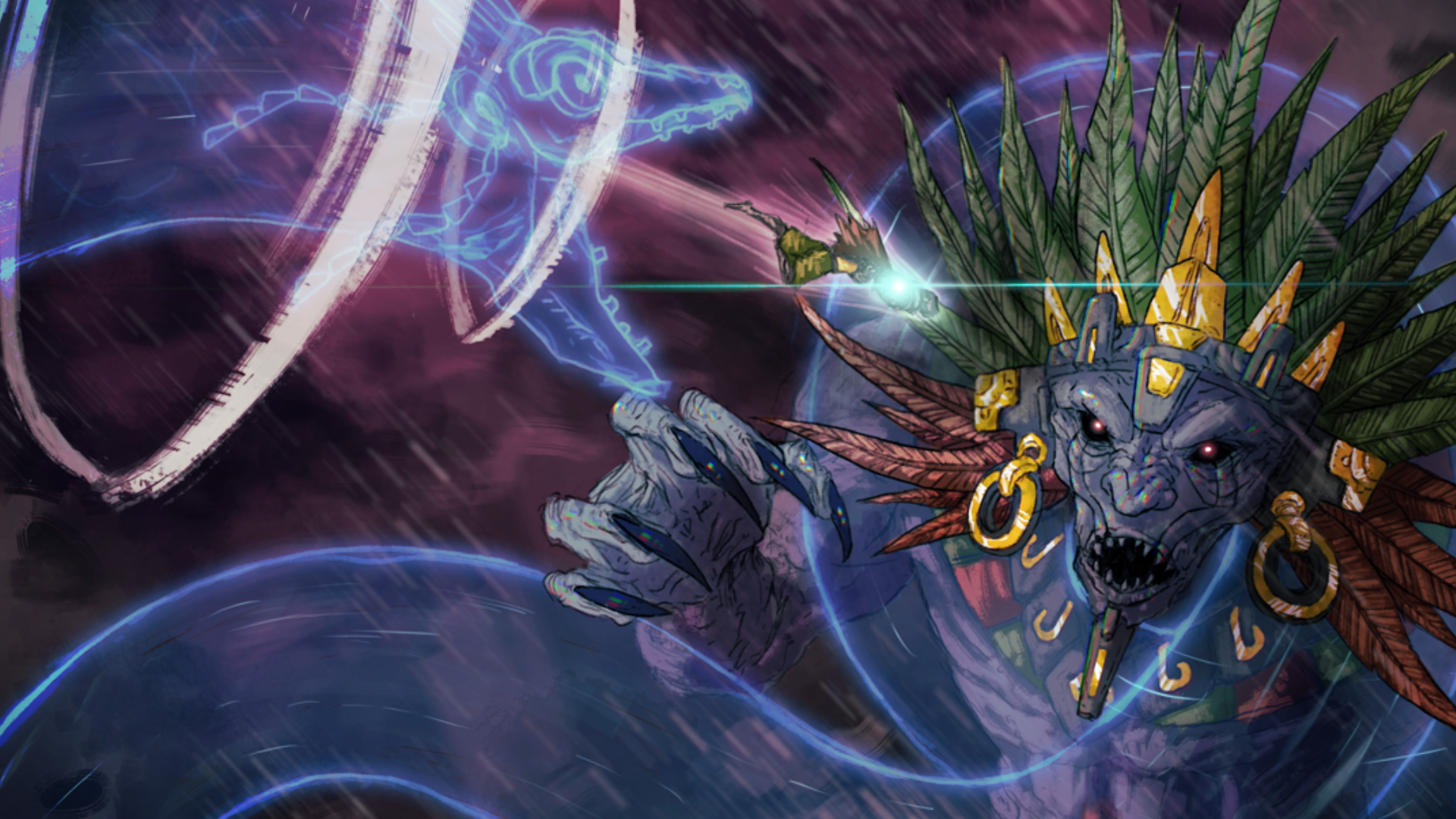 Aztech Forgotten Gods asks a tantalizing question: what if European colonization of the Americas never happened? What if the Aztec Empire persisted up through the modern-day and became a futuristic, technological superpower? If Aztech is anything to go by, though, the answers to these questions would be anything but inspirational.

Developed by Lienzo, the creators of the 2018 adventure game Mulaka, Aztech: Forgotten Gods displayed massive potential in its initial trailers as a narrative-driven action game based on Mesoamerican mythology. Yet its finished product squanders all its pretensions to greatness: not only is it a broken mess for Switch players, but its gameplay loop and narrative crumble under the weight of their aspirations, resulting in a disappointment of divine proportions.

Back to the Aztec Future

Aztech follows a young woman named Achtil, the one-armed daughter of an esteemed researcher and resident of the hyper-advanced metropolis of Tenochtitlan. She leads a mundane life working a series of odd jobs until a cataclysmic event unleashes the spirits of the ancient gods upon the earth, throwing the city into chaos. With the powers of a mythological hero suddenly thrust upon her, she sets out on a quest to stop these otherworldly creatures from wreaking havoc on the city—and in the process, she must come to terms with her own past.

For an action game, Aztech features an impressive emphasis on its narrative, looking to offer something more than the genre’s typical formula of heroism, struggle, and triumph. The game’s Mesoamerican setting gives it ample cultural reference material to draw from, while its focus on family dynamics through the close relationship of Achtil and her mother lends the story a uniquely personal angle. Yet even in Aztech’s opening segment, it quickly becomes apparent that this heavy focus on narrative was sorely misguided. Players will spend the vast majority of their time not challenging epic bosses or exploring fantastical cityscapes, but instead in sitting through countless conversations attempting–and largely failing–to elaborate on this world.

This emphasis on dialogue would not pose an issue if the inhabitants of Tenochtitlan had anything interesting to say, but that’s rarely the case: conversations last for what feels like hours, as characters drawl on and on about the latest Aztec research, explain the history of the city in excruciating detail, or theorize about the newly arrived gods. Extraordinarily heavy on exposition, these dry conversations make it difficult to resist the urge to skip every cutscene and simply get on with the game. Even its fascinating lore filled with Aztec deities and ancient warriors gets lost amid the sea of exposition, leading to a narrative that feels shockingly drab for such an evocative concept.

Aztech’s lack of voice acting paired with its stilted character animations make it especially difficult to become invested in this heavy-handed quest. When characters move like janky marionettes while their faces contort into hideous meshes each time they open their mouths, it’s hard to become invested in what they say. Although there may not be any voice acting, characters are not wholly silent: much like traditional Zelda titles, most characters will still make some sort of audible groan, moan, sigh, or exclamation to accompany each of their written lines, sounds that almost instantly grate on the ears through their repetition on nearly every text box in the story.

For all its issues, Aztech’s narrative arc is not all bad at its core–it especially picks up toward the game’s final act as it delves deeper into Achtil’s fraught relationship with her family and her struggle to find a place for herself in the world. Yet when you have to wade through hours of exposition dumps and exhaustive explanations of everything you have to do for each mission, all accompanied by the same five grunt sound effects repeated ad nauseum in each conversation, it feels near impossible for the game’s storytelling potential to shine from beneath all the clutter.

Things don’t fare much better in the gameplay. Achtil comes armed with a super-powered gauntlet known as the Lightkeeper, a tool she can use to soar through the skies like a jet pack and fight off any rogue gods she encounters in her path. In the precious little time available between cutscenes and conversations to venture out in the world, you’ll use Lightkeeper to explore a compact open-world environment of Tenochtitlan and the surrounding countryside, hunting down the monsters wreaking havoc on the environment.

Issues arise almost from the moment the initial tutorial ends. Tenochtitlan is about as barren as an open world can be, and while its pyramid-shaped structures may attempt to recall Aztec architecture, its drab gray towers and monorails feel more akin to an industrial complex than a living, breathing city. The freaks of nature who make up the game’s NPCs do little to make the world feel alive, and while there may be a few minigames and collectibles strewn throughout the city streets, these side objectives quickly become repetitive and barely add much dimension to the game’s world.

The combat itself leaves much to be desired. The battle system heavily relies on button mashing, so don’t be surprised if you can defeat most enemies, including bosses, simply by walloping the attack button–or by occasionally holding the strong attack button, if you’re feeling frisky. The auto lock-on system also poses issues due to the fact that there is no way to reliably control which enemies you lock on to—a dynamic that becomes especially problematic in boss battles, where minions often surround the big baddie and make it unnecessarily difficult to target your desired target.

Yet what about the battles against the gods themselves? Boss encounters are the main highlights of Aztech, but even they fall prey to unnecessary troubles. Each of the game’s massive bosses boasts distinctive designs and incredible scope and scale sometimes on the level of something like Shadow of the Colossus, where a miniscule Achtil must overcome the odds to fell a gigantic monster. However, these bosses lay bare the game’s most fundamental mechanical issues, including its unwieldy camera and floaty, unpredictable movement.

Lightkeeper excels at speed but not so much at precision, making it all too easy for you to soar directly past a boss unless you use the utmost care and methodical attention—a challenging ask, considering how battles demand fast-paced reactions to avoid attacks and exploit enemy weaknesses in the first place. These shaky controls turn many battles into tests of endurance rather than skill, and although there is a lock-on system in place for attacks, there is no way to specify what the camera will lock on to—it may lock on to the boss, but it could also lock on to a nearby grunt, and with how busy the screen can get, it can be impossible to tell what you’re actually attacking. The camera poses a problem even in routine world exploration, often zipping behind walls and making it impossible to see what’s going on.

Once again, the potential is there—there’s an undeniable satisfaction to be found in felling these gargantuan serpents, monkeys, skeletons, and other amorphous creatures of alternate dimensions. Yet when the camera is frantically flailing every which way while the controls themselves work against you, each encounter eventually becomes more frustrating than fun.

Adding insult to injury, the game is also about as ugly as sin, especially on Switch. The resolution drops to shocking lows in some areas, where not-too-distant parts of the environment condense into chunky blobs of pixels and some elements of the environment look like they were ripped straight from a PS1 asset pack. While it may be somewhat understandable for these issues to be as bad as they are on Switch, they look just as rough on other platforms as well, leading to an inexcusably rough technical package. The sci-fi and Aztec-infused art direction may be solid, but it’s let down by its lackluster execution.

Aztech Forgotten Gods didn’t have to be this way. Its setting is endlessly evocative, its narrative deeply promising, and its gameplay potentially enthralling. Yet its ambitions are clearly far too much for Lienzo to handle, as the game groans under the pressure of managing a fast-paced combat system, an open world, and a deep narrative all at once.

If the game had simply focused on one of its core ideas–if it had placed more emphasis on its narrative presentation or its combat system, for example, it could have become a far more cohesive final product. As it is now, though, the game feels like developers wanted to do a dozen different things and failed at each one of them. Its janky mechanics, hideous presentation, and drab narrative make for an experience worth going the way of the forgotten gods themselves—don’t waste space in your memory for this one.

Cuphead: The Delicious Last Course is a Meal Worth the Wait