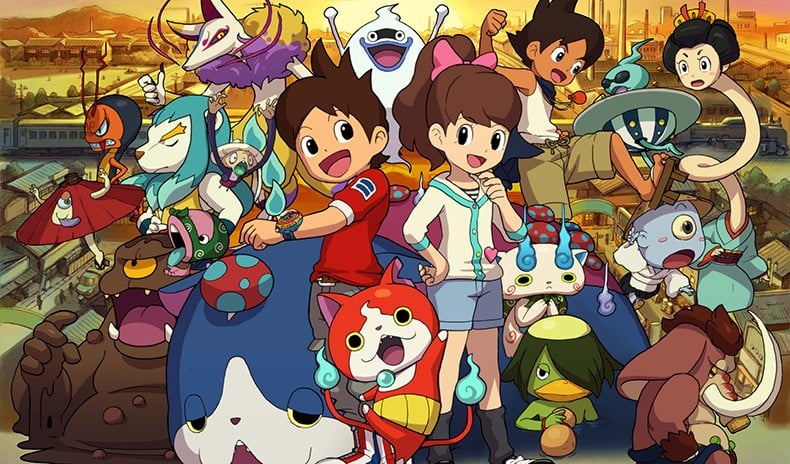 For countless Pokémon fans, November is a very long time to wait. If you feel that yearning for adventure, if your hands shake with the desire to capture and train a new monster, there is hope! While the market may be flooded with sub-par “me too” games, there are some truly stellar monster-capturing games out there, which can help hold you over until the release of Pokémon Sun and Moon. The Digimon series is one of Pokémon’s oldest rivals, and their recent release, Digimon Story: Cyber Sleuth, made the bold decision to target a more mature gaming audience. Available on the PS4 and PS Vita, Cyber Sleuth is a beautiful game with a robust, 40+ hour storyline, in which the player explores both the real and the Digital Worlds, where they solve mysteries, uncover nefarious plots and generally prevent the end of both worlds. With less focus on remaining a family friendly title, Cyber Sleuth took a few liberties, and features a handful of character designs which border on fanservice, as well as a plot which occasionally wanders into much darker territory than Pokémon has, thus far, dared venture. It leaves the player pondering other dimensions, good and evil, and even forces the main character to face their own mortality.

The battle system is very similar to Pokémon, and features turn based combat with a familiar move select menu. It also has a Colosseum, which allows players to battle other Digimon players via an online connection. It’s easy to get lost in the beautiful graphics and energetic soundtrack. Cyber Sleuth also shines with a feature which Pokémon players have yearned for since the days of Pokémon Yellow: Upon entering a Digital World dungeon, your digimon partners appear and explore the dungeon along side your character! Monster evolution is also handled differently than in the Pokémon franchise, as digivolution is not a one-way street. Digimon can be digivolved and de-digivolved countless times, and each digimon can digivolve into a large number of different monsters.

While you can battle competitively online, Cyber Sleuth does not have a trading system, nor does it offer cooperative game play. Gamers who are comfortable with a Teen rating will find plenty to do in Digimon Story: Cyber Sleuth, thanks to an addicting story, a Digifarm to maintain and expand, dozens of side quests and more than 200 digital monsters, which are just waiting to be unlocked. Yo-Kai Watch, on the other hand, dares to boldly challenge the Pokémon behemoth on its own, family-friendly turf. Available for the Nintendo 3DS, Yo-Kai Watch was an overnight sensation in Japan and is hoping to spark the same level of enthusiasm in other regions with its upcoming release of Yo-Kai Watch 2. Yo-Kai Watch features a bright cast of more than 400 unique Yo-Kai, so it presents an excellent challenge to those who feel the need to catch ’em all.

Yo-Kai Watch follows the adventures of a young protagonist who is able to see and communicate with spirit monsters known as Yo-Kai. Yo-Kai Watch weaves a cute coming of age tale, where the player navigates the trials of growing up, while simultaneously trying to locate and stop trouble making Yo-Kai. Yo-Kai create all kinds of mischief; some of their crimes are as minor as causing fights between couples, but some Yo-Kai go as far as causing car accidents.

Rather than depending on a random encounter system, Yo-Kai Watch requires players to take an active role in both finding and fighting Yo-Kai. Most Yo-Kai monsters are invisible, but the player is given a special watch which enables them to locate and reveal the mischievous spirits. A gadget on the upper screen alerts the player if there is a Yo-Kai in the vicinity, and, once it has been spotted, players often have to participate in a mini game of ‘keep an eye on the Yo-Kai’ in order to flush it out and force it into a fight. In battle, Yo-Kai will randomly hurl attacks the enemy, but to really be effective, players must use the special abilities of their Yo-Kai, powering them up by drawing symbols, popping bubbles or even physically winding a Yo-Kai up in order to launch it at their opponent. Yo-Kai can evolve into more powerful forms, some evolve by leveling up, others evolve by being fused with another Yo-Kai, while some Yo-Kai will not evolve unless they are fused with an item!

Yo-Kai Watch takes advantage of the StreetPass feature of the 3DS, allows for wireless battles against other players, and, while the first game lacked a trading feature, Yo-Kai Watch 2 will enable players to trade Yo-Kai monsters with their friends. Even without these features, you never feel alone while playing Yo-Kai Watch, as the player is accompanied by Whisper, a ghost-like Yo-Kai who takes on the role of sassy best friend, and ensures you are well educated about the world of Yo-Kai.

While the battle system in Yo-Kai Watch is more hands on, the game, as a whole, feels a bit more simple and juvenile than Pokémon. Yo-Kai Watch has an innocent charm, and there are plenty of side quests, such as bug collecting, to keep you busy once you’ve completed the 20-hour long main story. If you just need a quick hit of monster-on-monster fighting, then Minomonsters 2, available on both iOS and Android, may just be the fix you’re looking for. What Minomonsters lacks in a storyline, it makes up for in gorgeous animations, intuitive tap-and-swipe commands, unique and beautifully rendered monsters, and plenty of evil yet adorable Grublings for you to beat up. Catch and train your monsters, battle bosses, then head to the Coliseum to test your skills against other players.

Minomonsters 2 is a simple, straightforward monster battling mobile game that offers no trading, no cooperative play, and no real story line, but plenty to do in terms of fighting and monster collecting. It’s visually appealing, it’s free to play, and with over 100 monsters to collect, it’s sure to help you kill some time.

While there are dozens of monster collecting games out there, these three stand out due to their unique and exciting twists on the tried-and-true formula of the Pokémon games we’ve all come to know and love. Hopefully at least one of these will help ease your waiting pains until the release of Pokémon Sun and Pokémon Moon. Have you played any of these games? Did we overlook one of your favorite monster-collecting games? We’d love to hear your thoughts in the comments!

Kay, better known online as damphyr, is a Pokémon addict who dreams of one day running away to join the X-Men. A lover of art, comics, and video games, this purple haired wonder works for DeviantArt by day and acts as head mixologist at DrunkenFandom.com by night. A fandom nerd and SDCC panelist, she can most often be found tweeting at @Kaydamphyr, tanking her win rate on League of Legends, or obsessively breeding shiny competitive Pokémon.