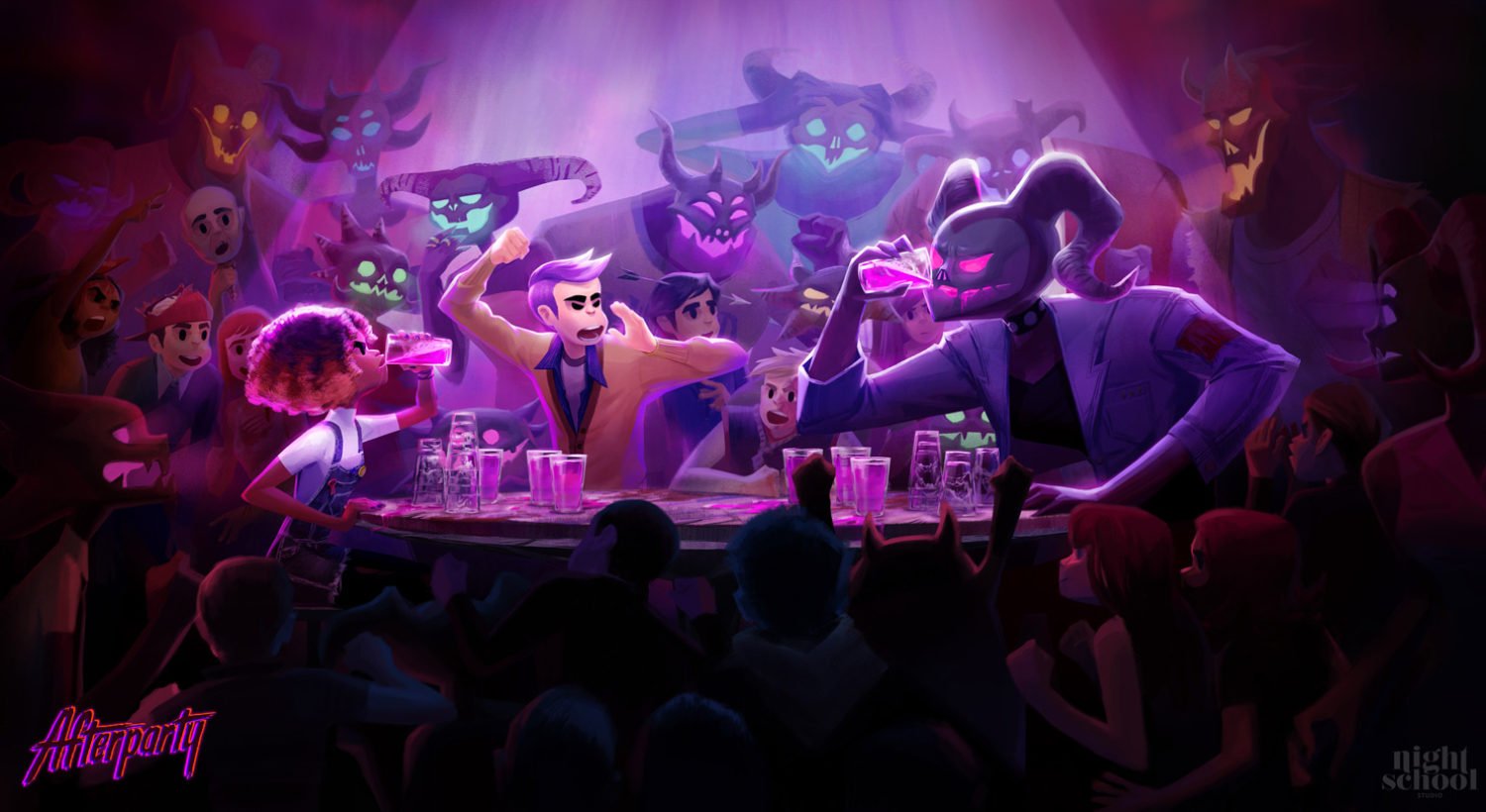 Afterparty, the new game from Night School Studio boasts a clever premise: You play as bashful and skittish Milo and the more assertive and sarcastic Lola who are armed with cynical but funny one-liners and ambidextrous wit. They are best friends and recent college graduates ready to enter the next chapter of their lives, only to their surprise, Milo and Lola have found themselves dead and dispatched to hell. With no recollection of how they got there, they are convinced it was a huge mistake and venture off looking for a way out. As they make their way through the underworld meeting demons and other humans sentenced to live their afterlife in Satan’s backyard, they discover a loophole that can send them back home. As it turns out, the devil is a raging alcoholic, and if they can outdrink the Prince of Darkness, they will get a first-class ticket back to Earth. It might seem easy, but as Milo and Lola quickly learn, nothing comes easy in Hell.

What follows is an emotional and morally complex adventure that mostly involves dialog choices, with a few mini-games thrown in for good measure. Throughout the course of the six-hour experience, you’ll visit multiple waterholes; a cocktail lounge, a sports bar, a discotheque, and Satan’s very own private afterparty— all while consuming various alcoholic drinks that give Milo and Lola a variety of attributes, often making it harder for them to stand on two feet.

The Ultimate Pub-Crawl Through Hell

Created in the same vein as Oxenfree, fans of Night School Studio will be happy to find their signature brand of comedy, colorful characters and witty dialogue return in Afterparty. As with Oxenfree, Afterparty is a single-player, point and click, dialog-driven experience in which you alternate between Milo and Lola, shifting between their perspectives as they react to various situations that unfold around them. As Lola and Milo journey across gorgeous 3D backgrounds, dialog choices are prompted in real-time, illustrated by colorful speech bubbles, which allow the player to decide how to respond to the characters they meet along the way. Players have a limited amount of time to respond and depending on your choice, it may or may not impact your journey moving forward. At one point, I had to make a tough decision between damning an innocent man to eternal torment or proving his innocence. I chose the former, believing that in the end, it was the greater good.

Unfortunately, these moments are few and far between as the story rarely deviates far from its central thread. The fun, however, is interacting with the demons you meet along the way and nudging each character to see how they react. The dialogue rattles along quickly from scene to scene, and if you don’t respond fast enough, the conversation moves on with or without you. More importantly, every decision you make will test the relationships of everyone involved. It helps, of course, that Night School has done an impressive job of fleshing out its stars. For a game as heavy on dialogue as this one, it’s a definite plus that it features good writing and strong voiceover performances from a tightly knit cast that includes Khoi Dao (Detective Pikachu), Ashly Burch, Dave Fennoy and Janina Gavankar.

Afterparty is very much a spiritual successor to Oxenfree and like that game, Afterparty is a deeply personal tale of friendship and growing up. What begins as a frequently funny story about two best friends making it through a night of extensive drinking and awkward conversations with numerous strangers— slowly shifts gears to darker territory as Sister May Wormhorn, a malignant spirit assigned to guide Milo and Lola through hell, torments the pair when forcing them to confront their silly hangups and inner-personal demons. Afterparty revels in exploring the moral quandaries its characters are faced with. Both Milo and Lola believe they deserve a better afterlife— and now they just need to prove it. In an early exchange, Milo asks Satan what he and Lola did to deserve such a horrible fate. Satan simply replies, “what did you do to deserve anything else?”

Afterparty Serves up a Wild Plot

In my review of Oxenfree, I wrote the game is a near-masterpiece, a blend of mind-boggling sci-fi, and subjective storytelling that serves as a singular and timeless piece of gaming. Afterparty doesn’t quite reach that level of brilliance mostly because it barely raises any stakes— which is odd considering the main plot revolves around two college kids trying to escape hell. Over the course of the game, Milo and Lola, who recently let slip the mortal coil, are left to hang out in the various demonic districts until early morning in which Satan will decide a punishment for their sins. In order to escape this dreaded fate, Milo and Lola must perform various quests and earn two seals from Lucifer’s monarchs which will grant them access to Satan’s afterparty where they can hopefully drink him under the table. It’s a premise that echoes Ingmar Bergman’s The Seventh Seal only with the humorous overtones of Edgar Wright’s The World’s End. As you make progress, occasionally Sister May Wormhorn will reappear and discuss the choices you made and the repercussions from making those decisions. Unlike Oxenfree, however, the choices you make rarely seem to have any impact on the story at large, and despite the game trying really hard to make you think it does, in the end, almost every decision you make doesn’t matter.

Even with its flaws, Afterparty serves up a wild plot, a boisterously engaging ensemble, and a sincere exploration of what friendship is. Night School’s neon-colored vision of Hell is especially great; the game has five main environments, each bursting with imagination and an impressive score by scntfc, the same artist who composed Oxenfree’s soundtrack. I especially love the inclusion of Bicker, Hell’s version of Twitter and the various supporting players (my personal favorite being Sam, the friendly demon taxi driver). Unsurprisingly, there’s a lot of drinking to be had in Afterparty, and each drink opens up new dialogue options and depending on your choice, will either make Lola and Milo more charming or less likable. For example, one drink will make Milo literally puke out his conscience, while another drink will have him reciting really lame jokes. The trick is figuring out how which drink will make you more confident since making friends with demons is crucial to finishing the game. Last but not least, Afterparty also includes various mini-games including a version of beer-pong which at one point, Lola must win in order to obtain a seal of approval and enter Satan’s gala.

All in all, Afterparty is a good time, boasting a terrific plot twist, laugh-out-loud gags, and clever set-pieces. With its punchy dialog and sharp writing, Afterparty asks big questions about what it means to be a better person and despite having two charismatic leads, Afterparty constantly reminds you that both Lola and Milo aren’t as innocent as they think they are and maybe, just maybe, they deserve a spot in hell.

I did run into some occasional slowdowns and drops in frame rate while playing on Xbox One, but because of the game’s simple mechanics, it never took me out of the experience. I was informed, however, that it’s a known issue and will be patched soon.