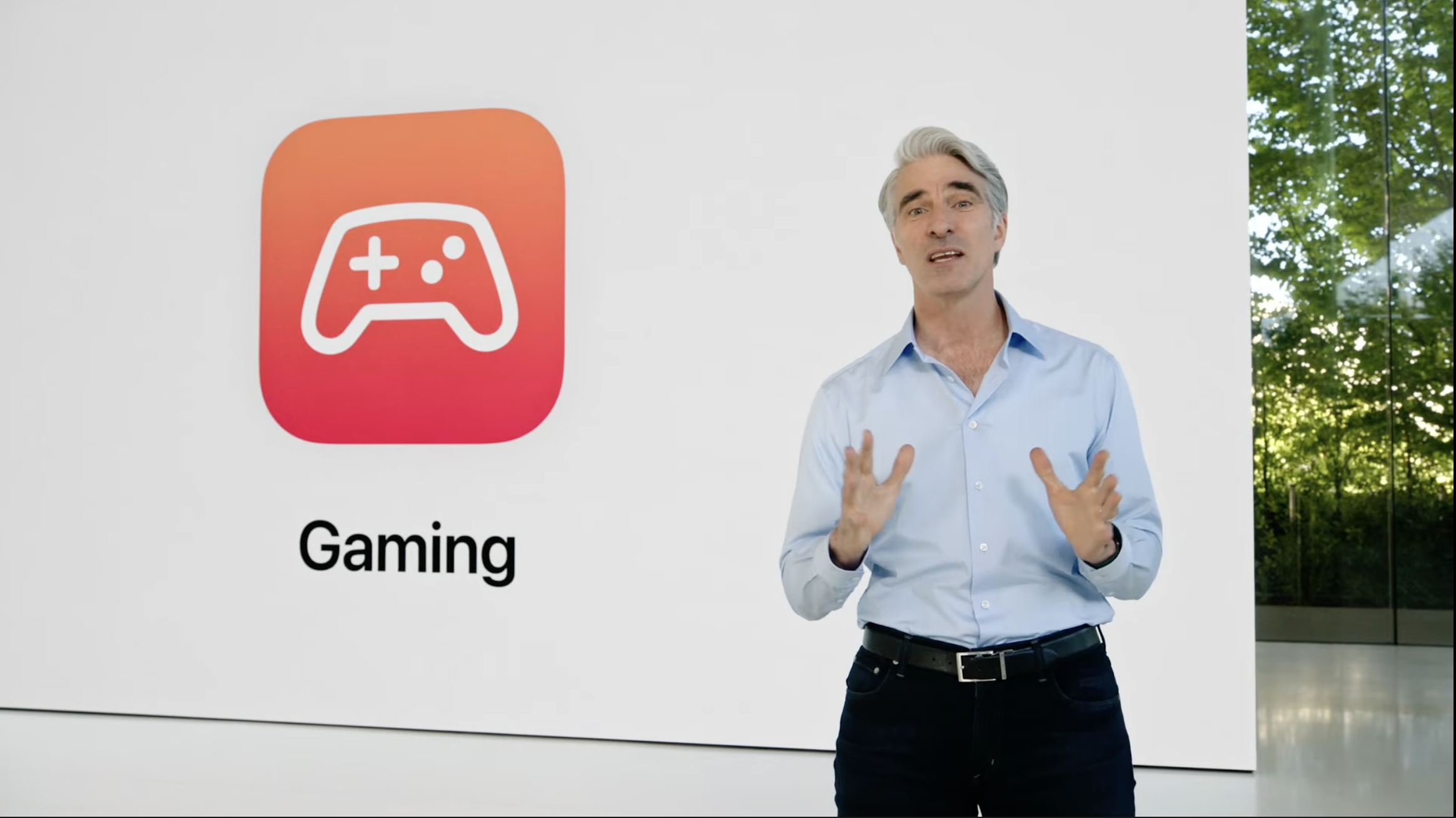 Bad blood exists between Apple and the gaming community. While PC games found a home on Windows and became synonymous with the platform, Apple seemed to jump at any opportunity to sneer at the gamers as if they were playing with toys. But Apple seems to be the only major corporation to have held so steadfast in its disdain for gaming, as the industry has now surpassed movies, TV, and music to become the largest entertainment industry in history. For years now, Apple has been a company that has shown practically zero interest in interacting with the gaming industry in any more than a casual capacity; but there were a few things said at Apple’s WWDC 2022 keynote address that points to a reversal of their long-held position leading to speculation that a new challenger may be ready to enter the fight.

Despite Apple having been on top of the world for more than 20 years now, operations haven’t always run quite so smoothly. Prior to Steve Jobs returning to the company in the mid-’90s, Apple was in dire straights. But with the founder’s return also came a shift in focus for the company; Apple would no longer be a tech company concerned with selling tech to their customers, they would become a tech company that sold a lifestyle to their customers. And so, as a result of this shift in focus, Apple began its campaign to convince people that becoming a hip, life-loving creative was just one purchase from Apple away. The company had moved out of the red ocean of computer geeks who were already aware of the fact that computers would someday become so ubiquitous that we would all carry them around in our pockets, and into the blue ocean of people who had no interest in computers.

But things haven’t been perfectly smooth sailing since the return of Jobs. After Apple had gotten their consumer laptops to a point of consistent mainstream awareness and built a reputation on their gold standard of quality control disaster struck the 2011-2013 MacBook Pros. Laptops from that generation of the MacBook Pro that shipped with discreet GPUs began to fail at an alarming rate. After an internal investigation into the failures, the culprit was identified as the Nvidia manufactured GPU soldered to the main logic board. The cost of repairing these faulty machines was significant but what hurt Apple, even more, was the damage that Nvidia’s product had done to Apple’s image of reliability. This damage to their brand image combined with AMD’s willingness to cater to Apple’s outrageous GPU specification demands led to Apple burning a bridge with Nvidia, the ramifications of which can still be felt today. The last mac to include an Nvidia GPU soldered to the board rolled off the line in 2015, and considering Nvidia’s dominance in the gaming space at the time, any attempt for Apple to get a foot in the door of the hardcore gaming market walked out the door with Nvidia.

In late 2010 the company implemented Game Center into iOS. Game Center was a networking type of application that streamlined players on iOS devices finding and interacting with each other in a similar way to Xbox Live or the PlayStation Network. Then in late 2019, almost 10 years after Game Center launched, Apple rolled out Apple Arcade. Unable to ignore the success of Microsoft’s Game Pass initiative on the Xbox, Apple Arcade was pitched to the audience as an iOS analog to Game Pass. A service that would allow players to download from a list of curated iOS games to their heart’s content for which they paid a low monthly subscription fee.

Considering the introduction of Game Center and Apple Arcade it’s safe to say that Apple’s attitude towards gaming has been slowly changing. But since the announcement of Apple silicon in 2020, what seemed like a crawl away from their old attitude towards gaming has now turned into a light jog and continues to gain speed. There was a time when building a custom PC mandated thinking of what sound card would be included and how that sound card would affect the overall experience. Over time manufacturers and developers moved all of that processing previously handled by the sound card onto the CPU and the idea of buying a sound card became a thing of the past. With their M series chips, Apple seems to be trying to do the same thing to discreet GPUs.

Integrated graphics is by no means a new concept, Intel has had integrated graphics on most of their chips for years and AMD just recently made the move to include integrated graphics on all of their upcoming Ryzen 7000 CPUs. But by including graphics processing cores on the same die as the CPU while also offering no option for a discreet GPU, Apple has forced itself into a position that demands excellence from that onboard graphics processing in order to remain competitive with their discreet alternatives. And thus far the plan seems to be working. Not only did the M1 completely blow all expectations away but its big brothers the M1 Pro, M1 Max, M1 Ultra, and now M2 have managed to put up some of the most impressive benchmark scores in professional benchmarking tools that the industry has ever seen, all while using onboard graphics.

As a result of their stellar graphics performance being included on the SOC, Apple has created a desktop and laptop computer chipset that is much more akin to what is seen in the PS5 and Xbox Series X. This level of extreme integration is what allows for the absurd extent of optimization that occurs to make console games look and perform competitively with much more powerful PC hardware. By creating such a tightly integrated platform of SOCs, Apple has afforded themselves extreme control over hardware configurations effectively placed their computers in a position of consolification.

That was all over the past two years, but the question remains: what specifically did Apple say or show in the WWDC ’22 keynote that implied a new and greater focus on gaming? The obvious answer is the inclusion of both No Man’s Sky and Resident Evil Village in the presentation. But that’s just two games so how can that possibly be indicative of a larger accommodation of games and gamers?

The answer is in the historical context. Apple has shown plenty of iOS games on stage at their various events over the past 15 years since the launch of the original iPhone, but the last time a fully-fledged triple-A game like Resident Evil Village was given a place on Apple’s stage was Macworld 1999 when Steve Jobs was the person to introduce the world to Halo Combat Evolved. This context combined with the announcement of Metal 3 and MetalFX upscaling (a competitor to Nvidia’s DLSS) and a mention of Village running at 1080p on the new M2 chip demonstrates an unprecedented attempt from Apple to appeal to capital G gamers.

And the signaling didn’t stop there. Over the past decade, content creation has become a pillar of the industry. Gaming content is now consumed almost as much as games themselves. With the rise of live streaming games and the production of gaming content has naturally come a greater interest amongst the gaming community in how gamers are achieving the things they do in-game. Multiple camera angles, including a top-down angle for a view of the player’s hands as they play, have become standard for most major streamers and content creators. And it just so happens that Apple is now appealing to this demand as well. Camera continuity is a feature that allows iPhone users to use their phone camera as a webcam but more interestingly uses the iPhone’s wide-angle lens and some software trickery to achieve that top-down angle making it more accessible to aspiring creators than ever. Apple’s newfound interest in gaming and the content that is created around games is undoubtedly what drove the creation of this feature.

Apple’s emphasis on gaming changed from completely non-existent to a slow drip in 2010 with Game Center, then a slightly less slow but still dripping faucet in 2019 with Apple Arcade. Now the faucet seems actually finally be on after WWDC ’22 but it is still a far cry from the absolute fire hoses of Microsoft, Sony, Nintendo, and Valve. And in order to compete with those giants in the industry Apple will need to continue to invest heavily for years to come. Were Apple to subsidize the porting of practically every single upcoming triple-A title to macOS to gain library parity with the competition, then they could potentially build a large enough audience that over time the amount of investment required for each port would diminish. This level of investment is no small task as it will take literally millions if not billions of dollars to achieve, but if Apple is looking to seriously compete then it is something that will have to be done.

In addition to that investment in a library of games, Apple would also have to get their M series processors in as many players’ hands and devices as possible. During the WWDC ’22 keynote, Capcom’s Masaru Ijuin mentioned that the upcoming port of Resident Evil Village is able to scale from the base M1 chip all the way up the entire line of Apple Silicon gaining performance along the way. This level of scalability on Apple silicon and confirmation that Resident Evil Village can run on the M1 means that theoretically, it could also run on any M1-equipped iPad. If this caliber of gaming experience were able to be realized on a multi-purpose tablet or even a phone, if Apple were able to find a way to fit the M1 into the iPhone Pro lineup, then Apple would immediately have an ecosystem of gaming devives that no other company in the market has. This would allow Apple to compete with Microsoft and Sony in the console space, Valve in the PC space, and even Nintendo in the handheld space.

The gaming industry is one of the fastest-growing industries in the world right now and as such Apple’s newfound interest isn’t surprising but we should all hold judgment until they have had enough time to properly invest. Penetrating the gaming market is an uphill battle for anyone but will be arguably more so for Apple. Their being late to the game by ignoring the industry and its popularity for so long and having a downright terrible reputation amongst gamers for having treated the gaming audience with open hostility equally as long is a circumstance of their own making. Still, if any company has the funds and talent to overcome these self-inflicted disadvantages it’s Apple. Ultimately I doubt Apple will be willing to invest the time and money needed to make the mac a competitive platform in the market but I hope they do because more competition is always good for the consumer.