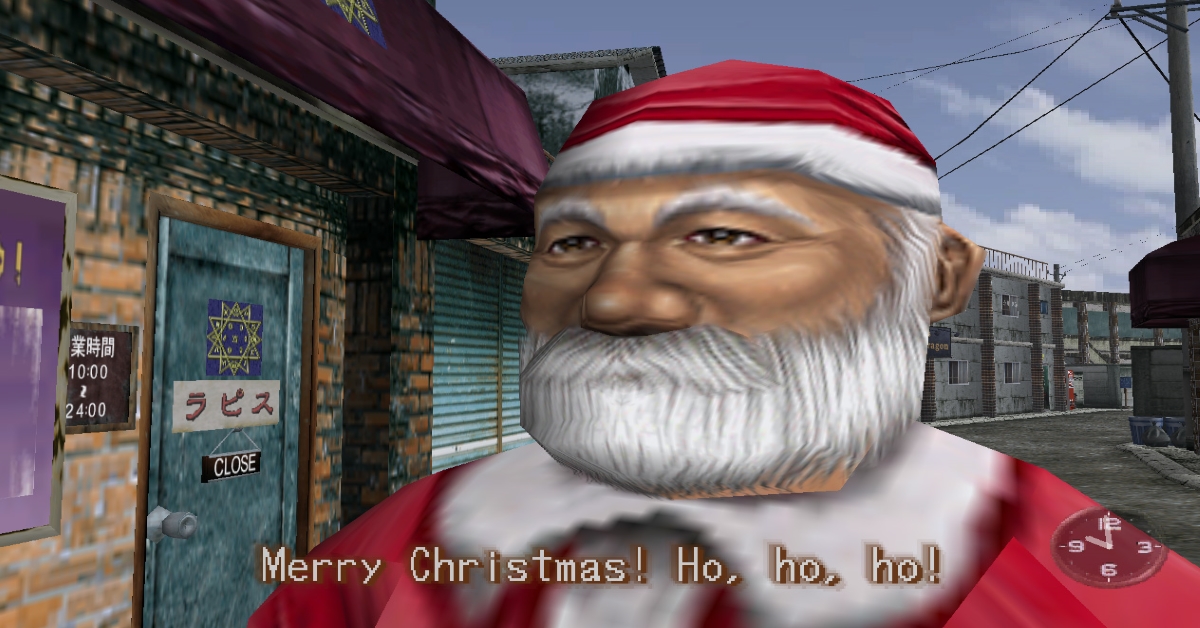 Christmas and Easter aren’t two holidays that you’d normally want to mix up, but that doesn’t stop there being such a thing as Christmas Easter eggs, least of all in the world of gaming. That’s right, we’ve compiled a list of ten of the best, though it was exceedingly hard to pick, as any Christmas-related item or secret located within a game that is primarily non-Christmassy can never be a bad thing. Of course, many titles have well-advertised Christmas content, but for something to be classed as an Easter egg it usually has to be well-hidden and as difficult to find as, well, an Easter egg … It’s little things like these which make gaming much more than a casual pastime and more like culture, or at least a reflection of culture.

Not many games have talking cars. Even less have talking cars that include Santa Claus. Yep, you heard that right. In this little-known Japanese-made PS2 racing adventure title, you can actually pay a visit to the big man in his house over by White Mountain in an icy area that vaguely resembles the North Pole. He’s even got the red body paint to prove it.

Interacting with him isn’t essential to the story, and despite one or two bits of dialogue hinting at his existence, he’s hidden away enough that it’s entirely possible to miss him. Just like the real Santa.

Secret Santa, anyone? The Simpsons: Hit & Run sure gets its fair share of lovers and haters, but one thing it’s impossible not to like is the sight of the main menu screen if the game is loaded up on Christmas Day. There, Homer is passed out on the sofa in a Santa costume, and a very delightful Christmas tree replaces the pretty standard plant over in the far corner of the living room. It is possible to see all this early by changing the console time to December 25th, but that would be cheating. A little like opening your Christmas presents a day early.

Rather than unveiling a hidden screen, level or item, this is more Christmas decoration all around. All you have to do is go to the save game menu and hit the following buttons: L, R, R, L, R, R, L, R, L, R. The game will then say “Enter Code”, at which point you enter “MERRY”. Got that?

The effects aren’t immediately apparent until entering a mini-game. Those mini-games are just as unchanged and just as punishing, only snow now covers the terrain, the music is a jingly beat and you’ll be collecting baubles and wrapped gifts instead of bananas. Oh the joys.

Well, okay, not exactly. Instead of Santa Claus, it’s Captain Price at the helm of the sleigh controlling the reindeer, a staple character throughout the series (who amazingly isn’t dead yet). Even Rudolph the Red-Nosed Reindeer gets a replacement in the form of Riley, a dog who features in Call of Duty: Ghosts.

In order to trigger this, the player must load up the map ‘Open Winter’ and shoot the reindeer on top of the clock tower which also happens to be a Back to the Future reference. This can only be done once the clock strikes twelve, after which point the sleigh soars through the air before disappearing into the dark and presumably very chilly night sky.

Visit from Santa (The Sims, Various)

The Sims really goes overboard here in its quirky depiction of human life by including actual house visits from ole’ St. Nick himself. Some of the later titles have slight variations on the original formula, but in general, and at least in the first game, all you have to do is leave a batch of cookies next to a fireplace and a Christmas Tree. If done right, Father Christmas himself will show up in the dead of night so long as everyone’s asleep. He’ll even scoff the cookies!

Of course, The Sims is a real life simulator that also happens to feature burglars, so there’s nothing saying he ain’t one of them …

For a series that revolves around cold-blooded killings and assassinations, a Hitman title might not be the first game you think of when it comes to Christmas Easter eggs that are both happy and cheery. To be fair, this one is neither of those, which doesn’t stop it from being pretty darned hilarious. In the bonus mission ‘Holiday Hoarders’, Agent 47 is tasked with taking out two American nationals and “professional thieves” (yeah, right) named Harry “Smokey” Bagnato and Marv “Slick” Gonif, who look awfully like the two goons from the much-loved Home Alone franchise. (Well, the first two movies anyway.)

They’re after some Christmas goodies in Paris’s Palais de Walewska, apparently having not learnt their lesson from the botched attempt on Duncan’s Toy Chest. The character profiles aren’t exact match ups, but they’re close enough, with Harry even sporting his trademark cap.

Sometimes simple is better, and what’s simpler than a plain old Christmas tree? Well, alright, this one has a few accompaniments and is conveniently isolated, just happening to be planted right out in the middle of a desert by the northern border of ‘The Dunes’ area of the generously-sized map. After all, isn’t this the kind of arid environment in which the Christmas story sprang to fruition? Not that the developers necessarily had that in mind when they put it in …

As stated, there are a few accompaniments and with an undeniably Mad Max flavor, as the tree comes surrounded by skulls and mannequins. A gruesome touch.

As a tradeable item, Santa hats appeared randomly all over the ground on old school RuneScape back in December 25th, 2002, at the height of the MMORPG’s reign. Players could pick up as many as they wanted, but the big giveaway didn’t reoccur in subsequent years, making the Santa hat a rare and coveted item among collectors and long-time players nowadays. And the transition to ‘RuneScape 2’ in 2004 removed the stat bonus (+3 to magic), meaning it’s now purely a cosmetic item and no less prized by collectors.

The 2021 Christmas event does however introduce a green Santa hat, taking us back to St Nicholas’s more earthy roots, but it’s just not the same, is it?

Our friends over in the Far East can rarely resist a nod to the ultimate Western holiday, and so it is here with Santa or ‘Santa Maeno’. It’s really just a guy dressed as Father Christmas who mills around Dobuita Street in the run-up to Christmas, and who can be interacted with. Only, instead of preparing and delivering presents, he advertises the local shops to passers-by, which is apparently his job now at this time of year. (“Don’t miss the special Santa lunch box set at Hokuhoku Lunches.”)

It certainly feels different seeing Santa reduced to no more than a humble guy walking the streets, perhaps getting more to the heart of the original Christmas story. By the way, the Christmas special set available at Funny Bear Burgers is delicious! His words, not mine …

Unlike the one in Mad Max, this Christmas tree has no skulls or mannequins adorning it, nor is it situated way out in the desert. Nope, it’s just a tree, plain and simple. Then again, for a game that released in 1986, Dark Castle might not have had the technology to do much more, but it’s still a nice touch, with bonus points for doing so mega early in gaming history. Those playing through it on Christmas Day back in the 80s (didn’t they have anything better to do?) would certainly have been a little surprised, as the tree makes a sudden appearance by the suit of armor in the middle right of the Great Hall.

Again, you can just alter time and kill Christmas by manually setting the date to December 25th, but where’s the magic in that?

Animal Crossing Through The Years: The History of New Year’s

Animal Crossing Through The Years: The History of Toy Day