It’s been over two decades since heads popped in Theme Hospital. Much like sitting in line to see your GP, the wait has been far too long. Now, without jiving in to see your psychiatrist or without visiting your doctor to fix your grey anatomy, you can cure your twenty-one years of hurt with Theme Hospital’s spiritual successor, Two Point Hospital.

There’s an immediate nostalgic impact in the first few minutes of playing Two Point Hospital; if Bullfrog Productions still existed, there would be no doubts who produced this game. The apple never falls far from the larynx, and without setting off the buzzer and killing another series, Mark Webley returns in his white jacket with more tongue-in-cheek hospital management. 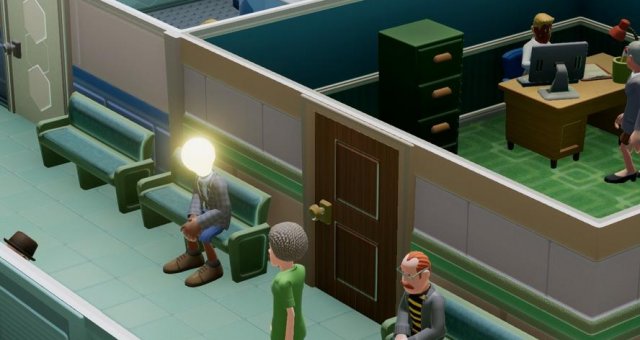 Managing a hospital can make you light-headed.

Dancing into the hospital with more ridiculous illnesses and a daft irony that’s only lost on the clown’s happy face, the deadpan and occasionally dark humor helps to alleviate from the eventual tedium of hospital management. There’s a cultural aspect that might be lost on people outside of Britain, from an illness called Bogwarts to a doctor called McBoatface, and there’s a level of self-deprecation that could only have hailed from a certain island in the Atlantic; even the hospital announcer appears to be in on the joke.

Beneath the humor, however, lies an incredibly difficult, intricately designed management game. Two Point Hospital wants to hold your hand, but isn’t afraid to squeeze and crush your bones in the process; there’s a delicate balance that is easy to wobble without the precision of a surgeon. Much like hospitals in the real world, Two Point Hospital relies on reputation, and if the player can achieve a higher reputation, then the hordes of Mordor shall descend through the once-quiet doors.

The formula is therefore quite simple: build some medical services, increase the reputation, make more money, and expand the hospital when more patients visit. Simple, yes, but delicate. Unfortunately, such is the humor of the game, it has to add a flair of personality. When left to die in the hospital corridors, patients maintain that same level of blather long after the janitor has mopped up their corpse. That, as well as coexisting alongside staff members with an appetite for petulant disobedience, allows the walls of the hospital to crumble long before the first earthquake. 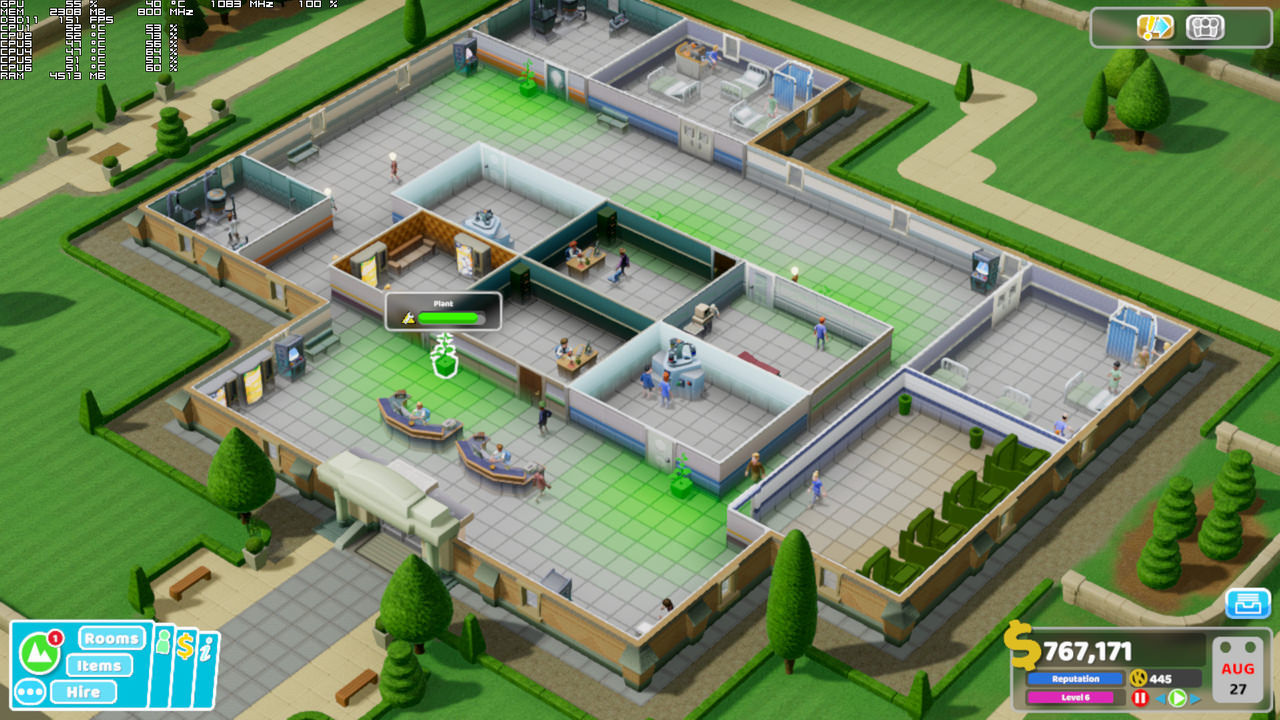 Building the hospital requires some intricacy.

To help the player progress, Two Point Hospital has a number of missions that will eventually lead to earning the hospital a star rating. Earn enough stars, and the player can move to another region, where new diseases can be found. Occasionally, a staff member might challenge you with a mission, and more often than not, it’s increasing the prestige of the staff room; best to avoid that mission, as a harrowing staff room should inspire them to stay away from their break and work.

Prestige can be advantageous, but other times rather pointless. While increasing the prestige of a room can make the doctor or nurse a little happier, it doesn’t stop the patients from leaving undiagnosed. Training is much more useful, but also means doctors leave their post to learn some new skills. This is a delicate operation that can leave the player hiring more staff than they probably need, which means more personalities to deal with. 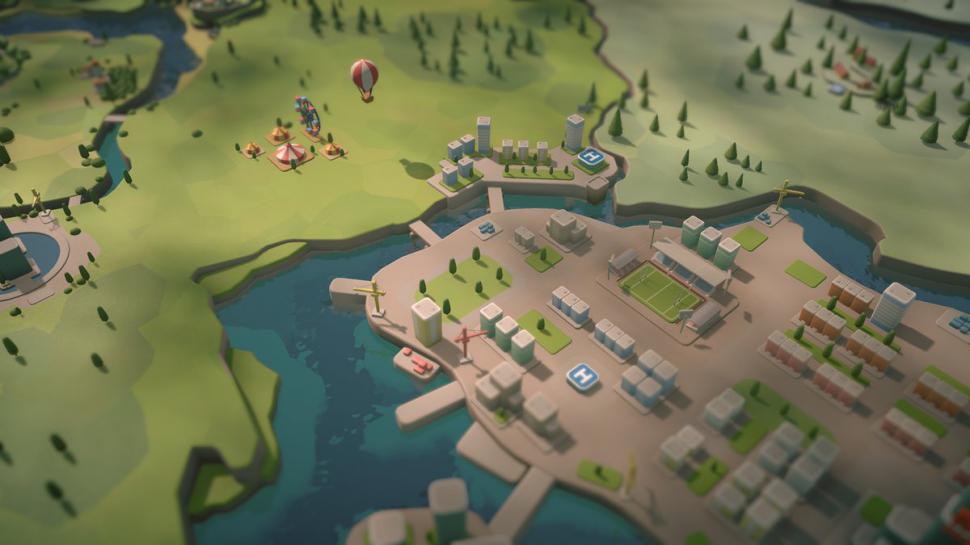 The overworld shows lots of opportunities for new hospitals.

In many situations, Two Point Hospital becomes a queue management simulation, a feature more British than the humor itself. It’s not unheard of for some patients to queue for over two hundred days, complain that they’re thirsty, and then die before they can stage their walkout. The hunger and thirst mechanic is difficult to manage — it does seem that the patients’ need for sustenance is increased with every vending machine placed in the corridors, and therefore it’s recommended to train all the janitors to capture ghosts.

Visually, Two Point Hospital maintains the smooth, charismatic charm that Theme Hospital possessed. There’s a fresh vibrancy added and an updated feel, but at its core, this is Theme Hospital with a splash of make-up. But if it isn’t broken, it certainly doesn’t need to be treated, and with easy controls and a simple-but-effective animatic design, Two Point Hospital does exactly what would have been expected. 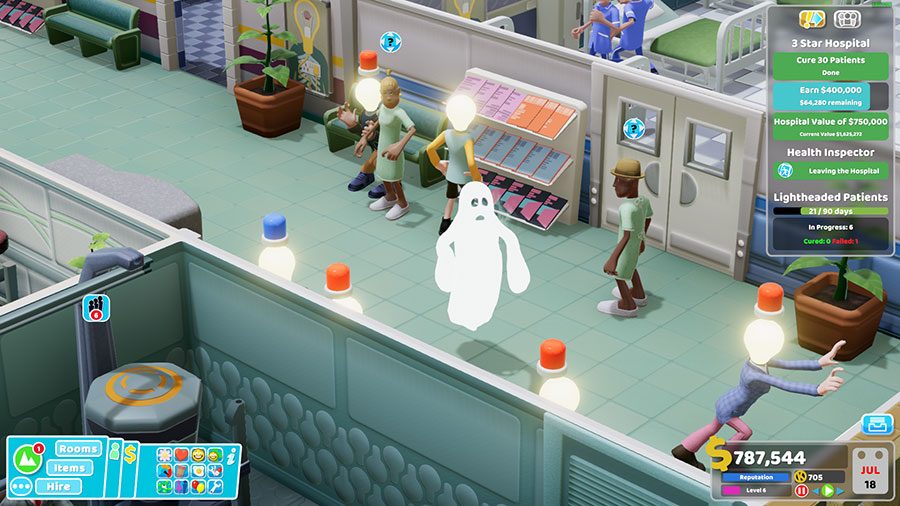 Who you gonna call?

There is a lot of repetition, and the player will find themselves in a constant chain of building new rooms, hiring new staff, and managing the basic functions of a hospital, but to overcome the potential tedium of the tasks that unfold, the player must be sold on the humor, and it’s difficult not to be. Two Point Hospital also has a tendency to jump from easy to difficult quickly, which without good management skills, can be a difficult leap to make. This is made more stressful when emergency patients arrive and all rush to the same clinic, thus turning the game into a queue management simulation once more.

These small criticisms aren’t the bubonic plague, however, and Two Point Hospital succeeds where Theme Hospital didn’t medicate. With an innovative approach to the genre and a delightful progression system that keeps each new hospital a fresh experience, Two Point Hospital has cured the nostalgic symptoms of the past, creating one of the finest simulation games in recent years.