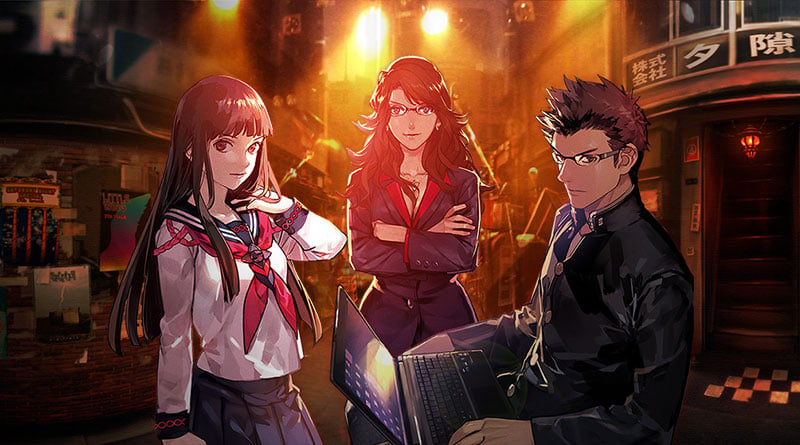 Reviewing a game like Tokyo Twilight Ghost Hunters: Daybreak Special Gigs can be a difficult task. As a visual novel style game, much of the player’s enjoyment will inevitably come from how well they connect with the story. Because of this, games similar to Ghost Hunters are often met with mixed reception. This title will most likely continue the trend, as there is not much to look forward to in this game outside of the story segments. While the hand drawn anime-style visuals and diverse cast will be enough to please fans of the genre, the bland strategy style gameplay will likely deter newcomers.

What sets this game apart from the multitude of other visual novel games is its presentation. Each screen is beautifully hand drawn, with gorgeous backgrounds and detailed characters populating each scene. Many of the games in this genre resort to using still images of characters accompanied by text, however Ghost Hunters spruces things up by having the characters move a little bit with each new line of dialog. The movements are very fluid and closely resemble the ones found in Vanillaware’s titles. It’s little additions like this that serve to further immerse the player into the story, which is surprisingly addictive to experience.

While the story itself is mostly linear, there are opportunities for the player to make minor decisions that can change the dialogue. These are fun when they appear, however nonsensical they may be. It’s safe to say that most players will find the diverse cast of character’s intriguing, especially if they are fans of the paranormal. The game almost feels like anime’s take on Ghost Busters, albeit with not quite as much humor. It’s definitely there, but most of it falls flat. The storytelling really shines during the more serious moments, especially when more characters start to get involved. Multiple endings also help to flesh out the universe and give players a reason to continue playing after the credits have rolled.

Unfortunately, Ghost Hunter’s weakest area is in the meat of its gameplay. While the visual novel segments are incredibly polished, the strategy segments are bland and uninspired. Players move their units around a white checkered board that resembles the first draft of a housing mock-up rather than an actual battle field. The only time the enemies are actually shown is when an attack is being executed. Outside of that, everything is represented by a circle with a symbol in it. The whole thing just looks dull, and they gameplay hook is not enough to make up for it. Instead of taking turns making movements, players are tasked with trying to predict where the enemy will go in the hopes of getting close enough to attack. This leaves way too much to chance, often resulting in the player aimlessly chasing the enemy around the map. Traps can be placed around the battle field before the battle begins, which certainly helps track down the enemy, but it feels like an afterthought that fails to add any type of satisfaction to the gameplay. 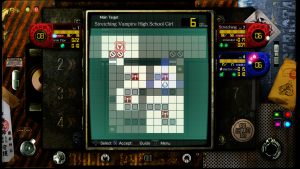 Looks more like a prototype for a board game than a battle field.

Tokyo Twilight Ghost Hunters: Daybreak Special Gigs is not a bad game. The visual fidelity is some of the best in the genre, combining anime style hand drawn art with fluid motion. The story itself is also very entertaining and will likely push players to get through the boring strategy segments in order to find out what happens next. Fans of visual novels will find plenty to enjoy here, while strategy fans will likely be disappointed.