The Tales series has been on shaky ground for the last several years. Tales of Xillia 2 presented confusing and complex combat along with a choice system that ultimately felt useless and unneeded. Tales of Zesteria was a game so hated by fans that its price was slashed within the first few months of its release. Once again it had confusing and convoluted combat, and an even worse story setup. A character was given a paid DLC story expansion at launch, among other things. There was plenty of skepticism behind Tales of Berseria’s announcement, but Namco pulled through to make one of the most memorable Tales games in a long time.

Tales of Berseria’s story follows Velvet Crowe, a young woman seeking revenge against her brother-in-law, Artorius. Artorius is a talented exorcist, one specialized in eliminating deamonic threats, and sacrificed his and Velvet’s younger brother, Laphicet, in an attempt to end an event called the Scarlet Night.  Velvet, heartbroken at the events that transpired, turns her rage into deamonic malevolence, and transforms into a demon before Artorius’ eyes. She attempts to kill Artorius then and there, but is defeated. Velvet is thrown into a prison cell to rot while the man who destroyed her life becomes a powerful political figures for attempting to end the deamonic curse that plagues the world. Three years later, Velvet is busted out of prison by one of Artorius’ ex-supporters, and her quest for vengeance begins anew. Velvet uses anyone and anything she can to achieve her goal, going so far as to incite a prison riot, take hostages, and even set a town on fire to create a diversion. She’s an anti-hero in every sense of the word, but the game still paints her in a light that is often sympathetic. You’re playing as the bad guy, but you’re in a corrupted world where morality and emotion often takes the backseat to convenience and logical reason. 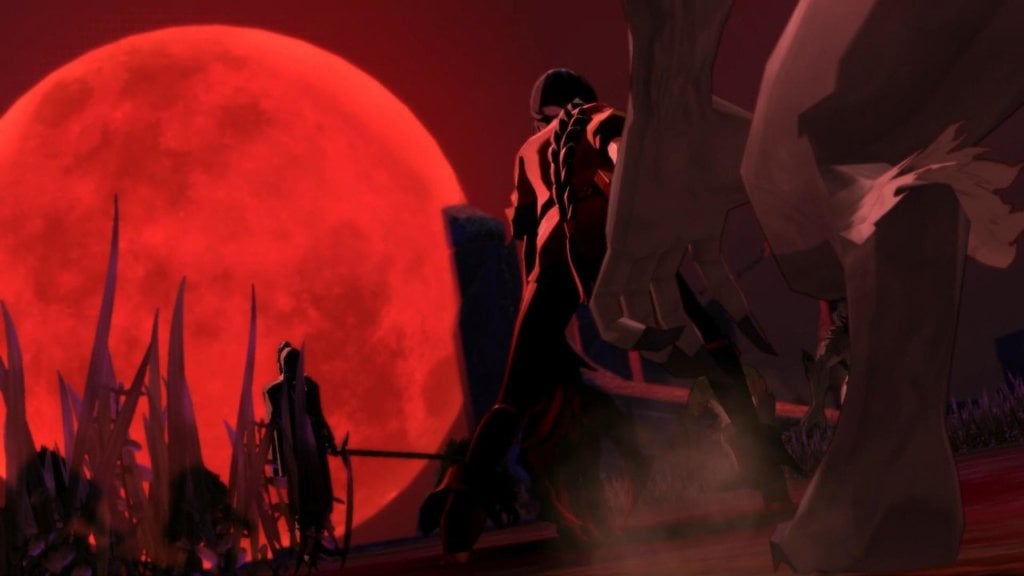 Velvet meets many other anti-heroes on her quest to slay Artorius and topple his religious order, The Abbey. During her prison escape she meets Rokurou, a master swordsman turned deamon, who also has a vendetta against his older sibling, and Magilou, a young witch who seems take nothing seriously. Her travels also bring her into contact with a Malak (elemental spirit) pirate named Eizen, who seeks to find his missing captain, the rouge exorcist Eleanor, and a young Malak that Velvet eventually names after her late brother.

Berseria’s main and supporting cast is one of the franchise’s strongest. Despite the game’s darker themes it’s peppered with plenty of light-hearted interaction between its cast. In particular, Magilou has some of the best lines in a Tales game to date; her clever quips, along with those of the other characters, bring a much-needed sense of dark comedy that fits in well with the game’s already dark themes. Characters without evil intentions or backstory, like Malak Laphicet and Eleanor, also balance out against the other villainous cast members, and keep the game from turning into a brooding mess. The game shows that even villains can have good intentions, as the variety of side-skits and cutscenes does an excellent job of defining each member of Berseria’s cast. Berseria’s story is easily one of the best the Tales series has seen in a long time. 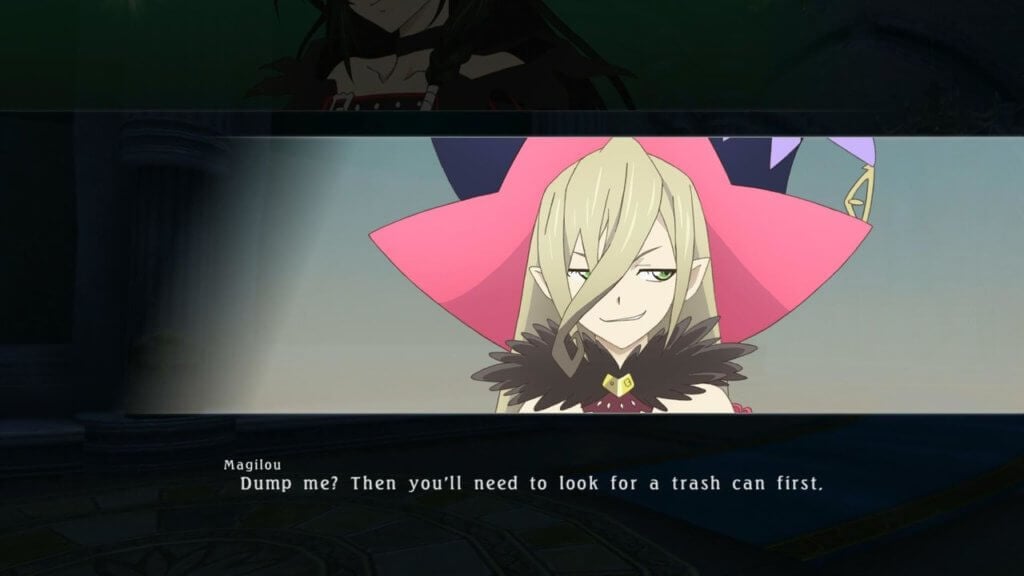 Story wasn’t the only thing to get a complete overhaul from Zesteria’s backlash, many gameplay elements have been changed too. Combat is a bit more streamlined, and feels more like the almost decade old Tales of Graces than Tales of Zesteria. Basic moves have been thrown out the window, and instead combat rewards resource management instead of button mashing. Every move a character uses costs a set amount of SG, and at the start of a fight every character has 3 units. SG can be stolen from enemies by stunning them, inflicting them with an ailment, or doing a frame-perfect dodge against their attacks. This can also happen to the player characters as well, who become greatly hindered if they lose too much SG to their opponents.

Combat customization gives every player-controlled character 16 attack slots that will chain together, 4 for each face button, with the option to earn more later. Strategy mostly comes down to knowing what moves to assign, and experimenting to find strong chains of attacks that work well together. When you first start out combat is a bit repetitive and sluggish due to a lack of moves, but once you start learning new artes the game becomes a lot more fun.

Berseria’s main story is roughly 40 hours in length, but it’s also crammed with plenty of side content that can nearly double that time for completionists. There’s a list of bounties for dangerous monsters in every area. Each bounty is roughly as difficult as a boss battle, and rewards you with plenty of gald as well as key items that improve everything from your running speed on the map to how many skills you can assign. There’s also a wide range of mini-games in certain towns that reward you with Tales coin to be spent on goofy costumes and other visual accessories.

The visuals in Berseria are some of the best in a Tales game to date. The map is dense, and filled with a variety of different locations. Castles and towns dot the islands of Desolation, and each branches out towards something different. There are beautiful tropical beach fronts, a freezing winter tundra, and quiet fall forests in addition to the more generic fields and dungeons. Each section is jammed with plenty to do thanks to the aforementioned bounty system and troves of hidden chests and puzzles that can make backtracking easier. Every location has its own distinct palette as well, it feels like Namco put in as much effort as they could to really flesh out each environment to its fullest.

The sound design is also exceptionally good. The soundtrack stands out with plenty of great themes, particularly those for specific characters, and the voice acting is great as well. The English voice actors really know how to get into their roles and make for some memorable performances. For those who would rather have other audio choices there is a Japanese track with English subtitles as a nice added bonus. Dual-audio is becoming a bigger deal in prolific JRPG releases, and it’s nice to see Namco adapting to meet both the needs of their customers. 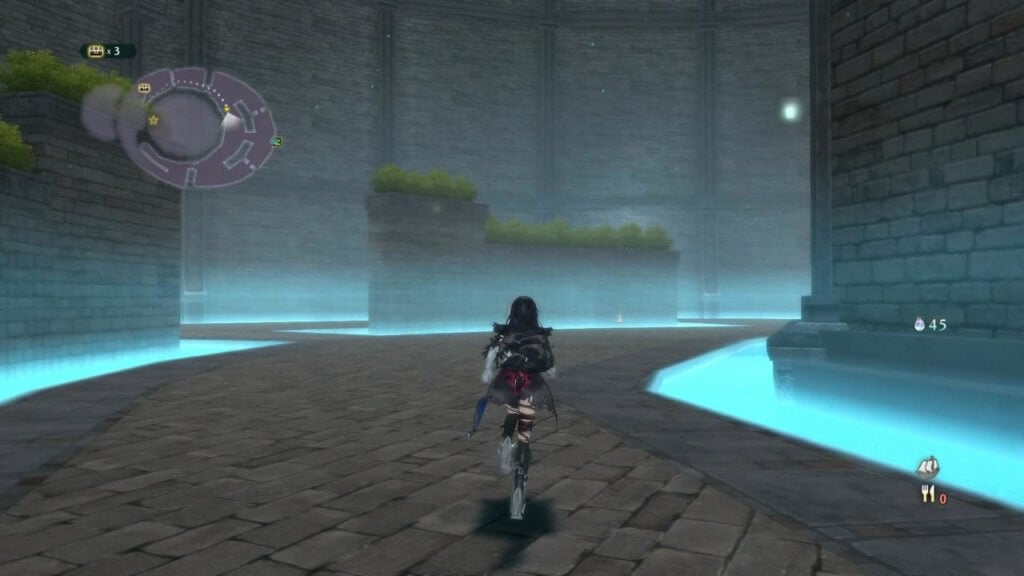 Every game is not without its faults though, and Berseria has its fair share of them. Backtracking is ever-present in the game. Dungeons and fields can be large and elaborate at times, and while that’s great for exploration, it stinks when you have to get from point A to point B. There is an in-game item called a denore bottle that allows you to quick travel to any city you’ve visited at least once, but it doesn’t work if there’s a cutscene that needs to happen halfway out in the middle of a field. The game has draw distance issues with environmental objects as well. This game was built for the PS4 and PS3 in Japan, and it seems they just put the same build on both systems.

Tales of Berseria is a great JRPG. Namco seems to have learned a lot from their past mistakes in Zesteria, and set out to meet and surpass fan expectations. What they ended up developing is a 40+ hour enjoyable story with refined gameplay and combat all inside a rich and beautiful world. Tales of Berseria is easily a must buy for any RPG fan, and its biggest flaw was launching in the same week as 3 other huge games.