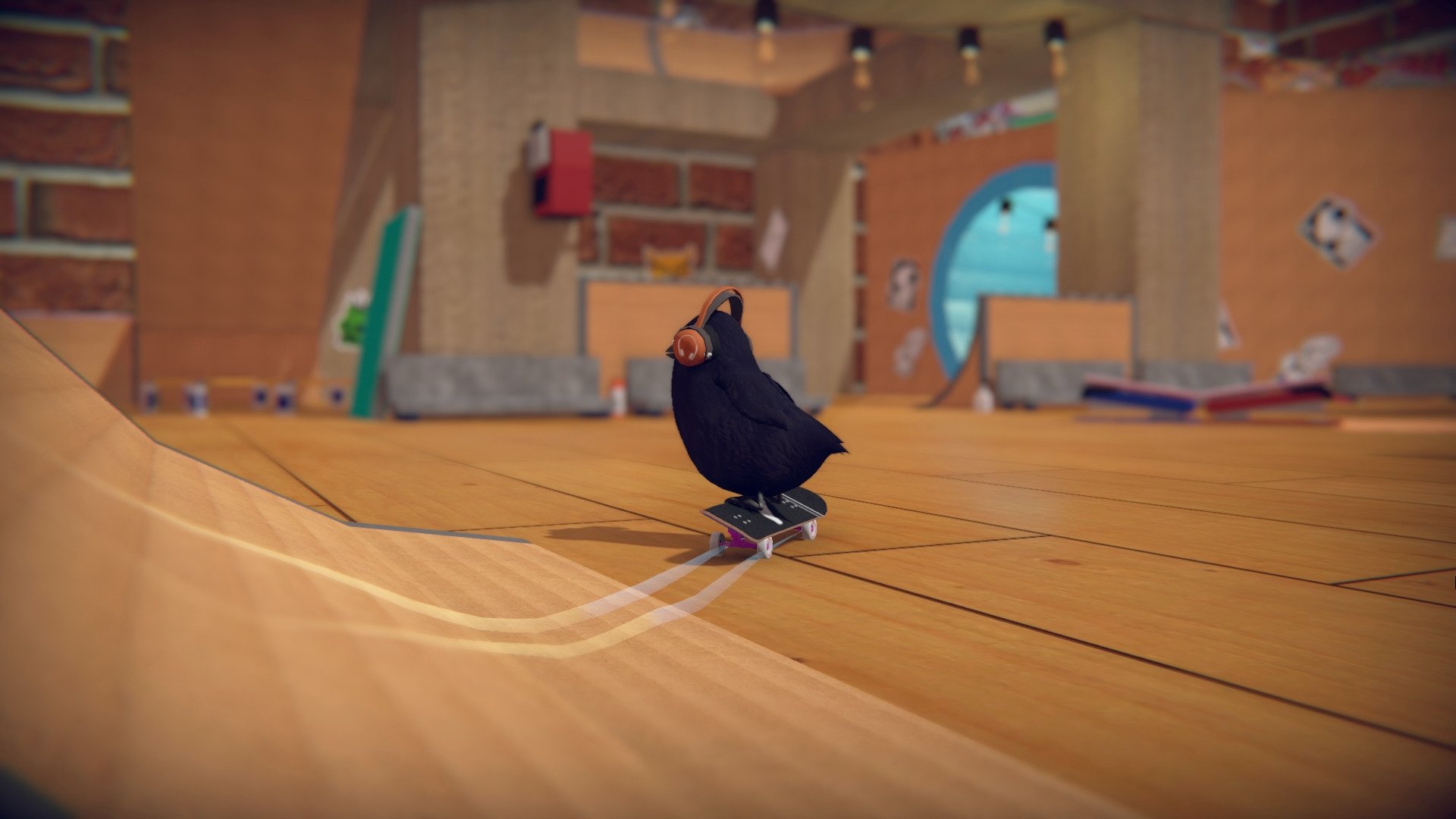 Back when it was announced in 2018, SkateBIRD was seemingly the only flying mammal rolling into the park as Tony Hawk Pro Skater took a needed hiatus and EA’s Skate series went missing in action. The genre of skateboarding video games was going through a downhill spiral of misfires and mistakes for quite some time, but SkateBIRD was one small Kickstarter project looking to uphold promises that could potentially shred. After all these years and just when the genre is starting to make a slow comeback, SkateBIRD is one of the best of its pack.

SkateBIRD grinds with pure class and cuteness without pulling any cheap tricks on its audience. Early Kickstarter backers of the game and potentially interested adopters are getting exactly what they asked for three years ago and much more. For those who have been looking for a relaxing albeit challenging skateboarding game to master, SkateBIRD is absolutely a perfect pick for you. Gushing with adorable characters, creative parks, a funky soundtrack, and plenty of familiar skills to master, SkateBIRD from Glass Bottom Games is yet another indie surprise that flies high to reach its goals.

It may not attempt anything particularly new, but SkateBIRD’s mechanics are as solid as skateboarding games can get. The movement of the player’s bird feels exactly as it should, with the mobility to easily glide around each park while still taking some practical physics into account. In terms of gameplay, SkateBIRD falls more so in line with the Tony Hawk Pro Skater games rather than the Skate series. Like the other aforementioned athletic bird, after learning the basics of the control scheme, pulling off sick tricks, riding wires, and jumping across ramps will become doable for players of any skill set. Whether you are a seasoned veteran at skateboarding games or a newcomer to the genre, SkateBIRD constantly feels embracive of all players.

The goal of SkateBIRD is to finish three objectives: complete tasks for your friendly cast of Birbs, obtain collectibles, and of course, have the utmost freeform fun. The game is designed to be both an experience that welcomes newcomers while letting skilled players be free to explore and experiment. SkateBIRD asks every person who picks up a controller to improve upon their skill level.

Rather than starting with an overwhelming amount of obstacles to tackle and bounce off, SkateBIRD opens to its most empty level. The five parks are spacious enough to allow players to experiment with their surroundings and pull off a substantial number of tricks, yet consecutively grow harder to conquer. It slowly works its way to skate parks of greater complexity that contain more to interact with.

The game’s story consists of multiple main quests and sidequests that slowly help each park further expand. The tasks have been carefully placed in a specific order so all players can thoroughly understand the game’s mechanics without being overwhelmed. On top of containing small mini-maps that alert players where every available objective is, the menu screen and its subsections adequately assist players in understanding skateboard lingo along with how to perform individual tricks. The fluid gameplay structure is arguably one of the best recent introductions to a skateboarding title that players can ask for.

Its gameplay may strike at the same high-quality standards of Tony Hawk, but where SkateBIRD really thrives most in comparison to its competition is within its atmosphere. The overall aesthetic and vibe of SkateBIRD is a unique blend between adorable birds, miniaturized environments, and what most audiences will envision as “stereotypical skateboarding culture” tropes. Due to taking on the role of a bird, each park is designed to be seen from the avian’s height. Rather than having generic skateparks, the game is filled with living room setups and rooftop structures.

While the parks and soundtrack are exceptional, SkateBIRD’s real highlight comes of course from its customizable character and cast of recurring “Birbs”.

By far one of SkateBIRD’s most entertaining aspects is creating your own character. Rather than being locked to a specific bird species or costume for your playthrough, SkateBIRD always allows players to instantly reveal their own individuality. While the game may open on its character creator, that very same menu can be opened at any given time on the pause screen. As extra collectibles can be discovered throughout the title’s parks, there are so many different ways to customize your bird. Unlocking a pirate hat or belt buckle may seem like a measly reward, but the giddy smile it will put on a player’s face will be worth the satisfying effort to find each pack of collectibles. It is impossible not to love how adorable your bird can get.

Additionally, it should be noted that the story is rather charming. SkateBIRD was hit with numerous delays as the developers wanted to add an actual story to the game and the result is substantial. Not only is the game packed with hilarious dialogue, but it contains a delightful cast of lovely Birbs who utilize many of the in-game cosmetic options. SkateBIRD’s heart and soul are definitely anchored by its core mechanics and player character, but the rest of its recurring avians certainly deserves a mention. Typically in most sports games, you would want to skip through the text, but players will no doubt want to take the time to read SkateBIRD’s dialogue that plays well with flight, human, and mammal jokes.

On a side note, perhaps this may just pertain to the Nintendo Switch port, but SkateBIRD seemingly has a handful of bugs in terms of its camera and framerate — not a lot, but a noticeable few. I have stumbled into many instances where the camera can get wildly shaky in tight areas. The framerate issues are not common, but they are particularly noticeable in the game’s second park where a parade of rooftop fans can cause massive lag spikes. These issues can occasionally break the immersion, but they are nothing drastic to worry about as they are typically fixed instantly after your Birb either falls off their board or traverses enough around the area.

At its core, SkateBIRD is light-hearted, cute, and approachable. It is far from the most complex skateboarding game currently available on the market, yet it provides exactly what players want from the genre. It succeeds in colliding some of the best aspects of its inspirations with an atmosphere that players will certainly get a good laugh out of. With its cohesive five worlds and a positively overwhelming amount of character creation options, Glass Bottom Games’ newest project is bursting with charisma and love from every angle. It is an ollie that sticks the landing perfectly as it delivers on all of its long-awaited promises. Be sure not to miss SkateBIRD because it is the absolute word.