If there’s one genre quintessentially PC, it’s the management sim. From RollerCoaster Tycoon to The Sims, the dubious thrill of managing the ins and outs of a given microcosm creates endless hours of entertainment. Chief among the genre is the incredible and incredibly dense Dwarf Fortress, freeware that many claim is the most detailed game of all time. For years, people have been trying to ape Dwarf Fortress into a more playable experience, and the latest — and possible greatest — of these attempts comes to us from Tynan Sylvester of Ludeon Studios with RimWorld. Does this sci-fi take finally translate Dwarf Fortress to the masses, or is this just another contender lost in the whirlwind?

RimWorld immediately presents you with a few options before you embark to the titular planetside. Players can choose from three colonists, each of whom crashland on the planet with decent supplies and some technical proficiency — specifically the ability to build a power grid. However, there are also different challenge modes, like starting as a tribe of five cavemen with no technology, a single (very) well-supplied trader, or a character who is alone and naked with nothing. Then there’s the ability to create random scenarios, where you could get a party of teenagers, and anyone who dies explodes violently, while you start with 24 chairs and a Yorkshire terrier. This is a pretty good indication of what Rimworld offers.

The game is all about you creating your own experience within its rules. After selecting your colonists, you’ll opt where to site your base, and then it’s up to you to survive. Ostensibly, the endgame is to research and build a rocket to escape Rimworld — and rightly so, since the planet really sucks. But how — or even if — you do that is up to you. Like Dwarf Fortress, the better plot is what happens to you on a day-to-day basis, as a series of never ending random events constantly forces you to change and adapt. 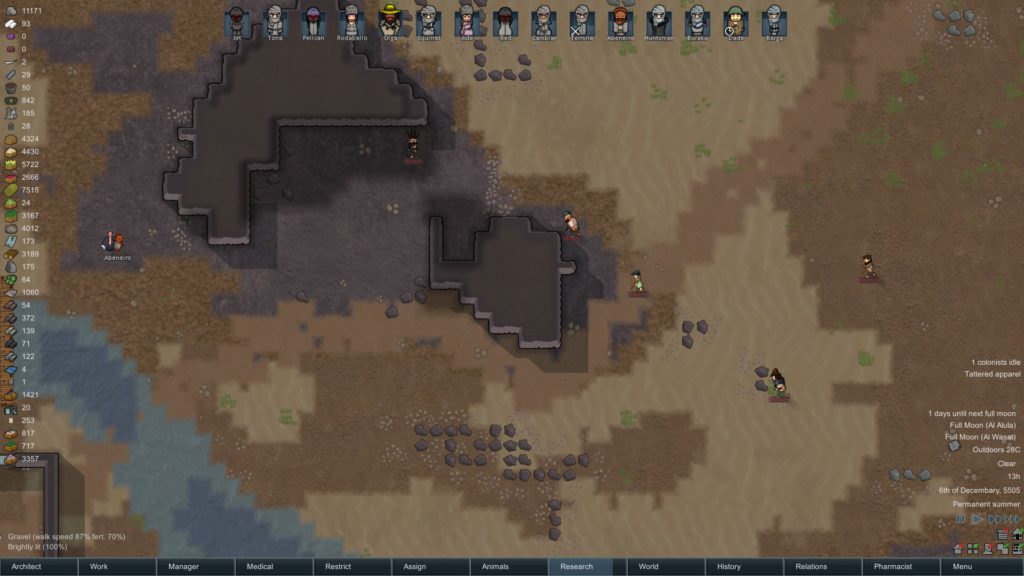 Occasional raids keep your colonists busy, but winning will net you prisoners and equipment

These events are handed out by one of the game’s three AI storytellers, who are selected when you start but can be changed at any time. There’s Classic Cassandra, who slowly but surely starts introducing more and more challenging events as you gradually upgrade your base and colonists. There’s Phoebe Chillax, who remains calm and doesn’t send that many dangers at you. Finally, there is many fans’ favorite, Randy Random, who does whatever he wants whenever he wants to totally keep you on your feet. Randy is how the game should be played, and while you may curse him for sending three cannibal war-bands in a row at you, you’ll also praise him when 700 bushels of corn fall from the sky.

RimWorld‘s gameplay is conducted through a great interface. Right-clicking at any time brings up the menu, which stays to the bottom of the screen and lets you see what’s going on at all times. From here, you can build furniture and workshops, set up walls and floors, designate areas for stockpiles, and assign work orders for things like mining or logging. Once you make an order, it’s up to your colonists (all of whom are AI controlled) to actually follow through on your requests, provided they’re available to. Normally, you can just leave your people alone, but unlike Dwarf Fortress, you are able to override whatever your colonists are doing and force them to do certain actions when the need arises. If you really need total control, you can also draft them into your armed forces, which allows you to direct where they go (although using this outside combat isn’t usually necessary).

You will run into combat, and somewhat often. The animals of RimWorld aren’t usually that friendly, especially when you start gunning down their herd for food, and you’ll occasionally need to fight off wild critters out for blood. Then there are the other inhabitants of the world itself, ranging from cannibal gangs to roaming super-soldiers. Some of these will want to trade with you, but mostly they’ll want to burn down your house and steal your colonists for slavery. Not to worry, since you can return the favor in kind, and incapacitated enemy units can be held prisoner and even recruited after a time. You can also cut out their organs and skin them to make couches — it’s really open to your choices. 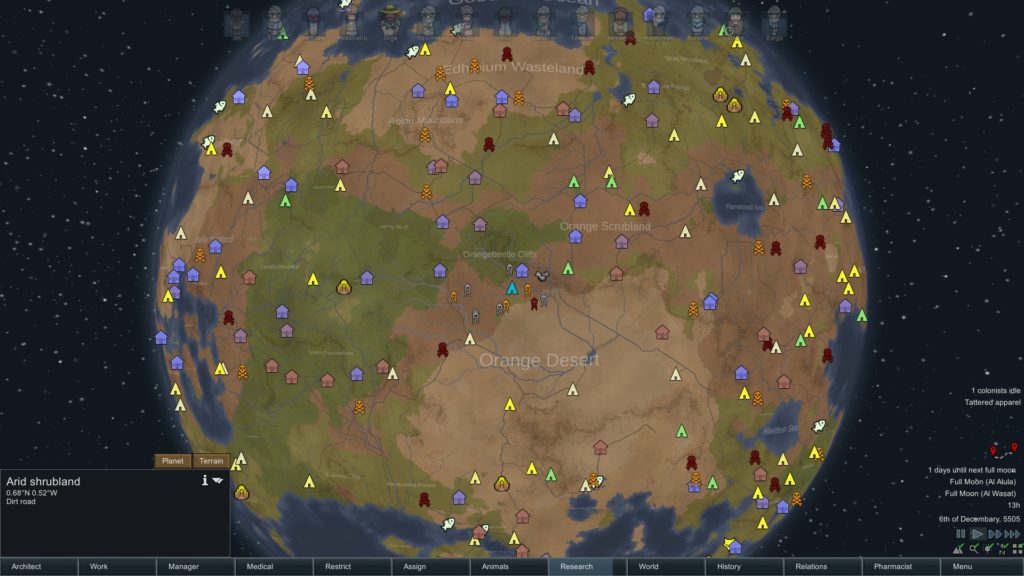 Your colonists are really the heart and soul of RimWorld. Each “pawn” has its own personality created from their childhood (and if they’re old enough, adulthood) which affects what jobs they’re good at and what might set them off. You can have a manically depressive pyromaniac that’s an amazing shot and a great cook, an ultra-beautiful, brain-dead vat-grown slave that’s oddly good at patching people up, or an oppressed, teenaged runaway that can mine faster than a machine. There are nearly endless combinations, some more useful than others, and as you expand your base by recruiting or occasionally buying new pawns, you’ll have to sort of mesh people into your colony’s framework by overcoming their challenges.

Outside of just personalities, there is a pervasive sense of hidden depth throughout RimWorld, kept under wraps by its easily accessible interface and simple, utilitarian graphics. Every living creature has a simulated skeleton and internal organs that can be damaged, cut off, or even upgraded. There’s a temperature simulation that means that winters can be brutally cold and flaming buildings are unbearably hot. There’s fire propagation, meaning that a wayward lightning bolt can burn down an entire forest. There’s AI routines for the wildlife running around, meaning a hungry wolf will start to go after your livestock if it thinks they are an easy enough target. The amount of hidden mechanics and routines in this game is nothing short of impressive, and discovering something new and figuring out how to exploit that system is a great thrill.

Graphically, the game is fairly bare-bones. The entirety is played from a top-down perspective, and the camera can be moved out far enough to show off pretty much the entire map. There’s not a lot of detail on particular objects, although the appearance of your pawns will change based on what clothes you equip them with. Still, while it’s simple and lacks the detail of games like The Sims or even Planet Coaster, it does serve the game well, and individual items are easily picked apart in the sometimes very busy maps. 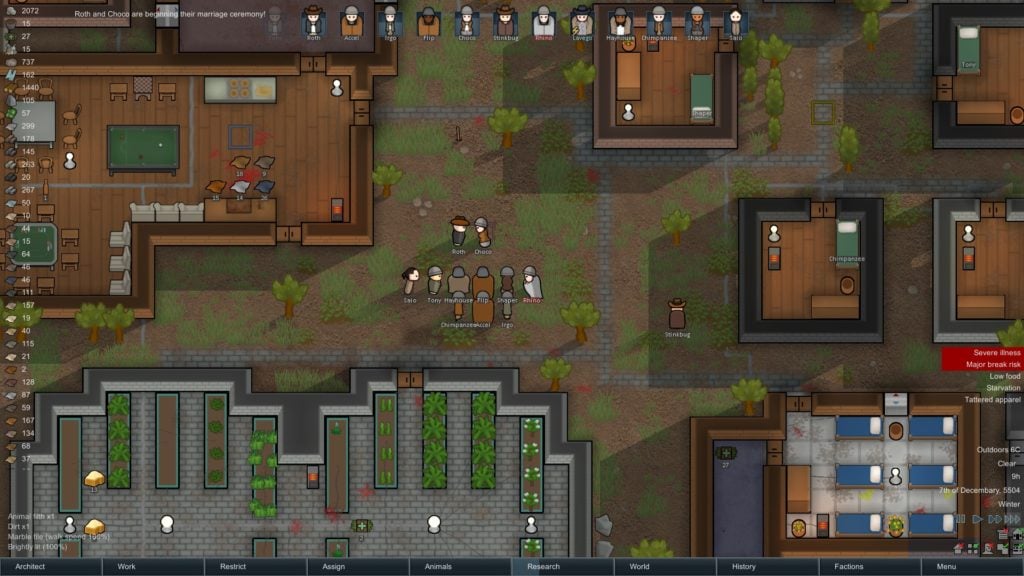 Colonists can fall in love, get married, or just start beating each other up depending on their personalities

On the audio side, sound effects are fairly decent. Many of the guns have different sound effects, which helps players pick them apart from each other during fights. Ambient audio is quiet but moody, and all of the different animal species have their own barks and roars. The soundtrack is really good, with a mix of sci-fi and country-esque twangs that help solidify the frontier nature of the game’s setting.

Finally, it would improper to talk about RimWorld without mentioning the mod community, and it’s absolutely stunning what people have done with this game. Seemingly every day there’s something new being added, whether it’s just new weapons and armor or entirely new game modes. There are massive overhauls to major systems and minor tweaks for personal preference, all of which are easy to manage thanks to the game’s built-in Steam Workshop integration and mod manager in the main menu.

RimWorld is a nearly perfect game, absolutely filled with content and addicting but simple gameplay. It’s the type of game that will eat up days and weeks of your life if you let it — comfy as a blanket and as exciting as an action movie in the same session, and it keeps finding new ways to keep you invested. It’s not just a great game for fans of the management genre, but a truly amazing game that anyone interested in seeing what happens when you try to survive on a hostile planet should pick up.