Game development is tough. It requires discipline, organization, and plain hard work. Devs often find themselves running against the clock, needing more time than initially planned just so they can finish. Naturally, since I hate myself I’m taking part in Ren’Py Jam where the goal is to pump out a game in two weeks.

Game jams, for the uninitiated, are events in which participants are tasked with creating a game with a given set of rules. Some like Games For Our Future Jam take place over the course of 48 hours and have designers make a game that explores climate change. Others, like LOWREZJAM require developers to create games with a 64×64 display in a two-week timeframe.

The fresh hell that I’ve subjected myself is Ren’Py Jam, taking place from September 15th to the 30th. Ren’Py is a popular visual novel development engine, used by such games as Katawa Shoujo and Analogue: A Hate Story. As a hobbyist developer, Ren’Py Jam appealed to me because of the engine’s accessibility. However, that didn’t mean I could take it easy. Not by a longshot. 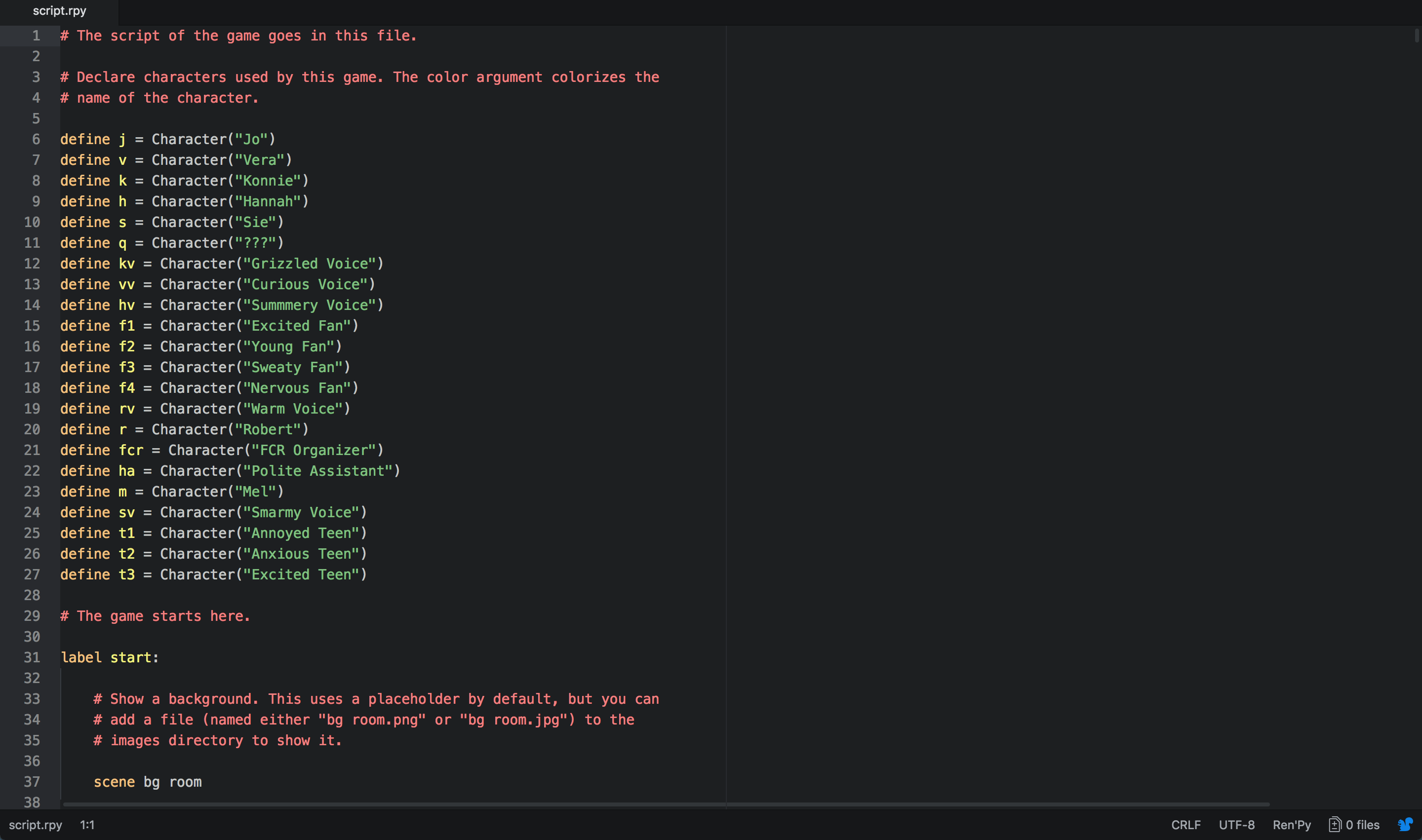 One of the biggest problems that developers encounter is that of scope. It’s difficult to manage expectations between the game in your head and the one that you’ll actually make. In order to save myself some stress, I planned a rough outline for what the game would be.

Since visual novels are narrative-based games, I had to draft up what the story would be about. Easy enough. I took an idea for another project that I’ve been sitting on and transposed it into a more easily digestible format.

When I say “easily digestible” that’s relatively speaking of course. My story outline ended up consisting of 15 different scenes that, as I quickly found out, stretched a little further than I expected. Story was just one part of the game though. Visual novels also call for appealing art and some level of interactive gameplay.

Working with my artist has been fairly smooth. We’ve got a pretty good understanding of what the other is capable of and know exactly what kind of style to shoot for. It also helps that he’s my brother, so if anything goes wrong I won’t feel bad about screaming at him.

As for the “gameplay” parts, that’s where I wanted to stand out. Most visual novels rely on branching narratives where the stories will diverge depending on player choice. This often happens through a list of choose-your-own-adventure choices at a given moment in the narrative, but some games like VA-11 Hall-A and Monster Prom adopt more innovative approaches to that interactivity.

I made the decision to forego any branching storylines. Instead, where I want to focus player interaction is through Warioware-like minigames that break up the reading. How exactly that will get executed is up in the air for now. My main priority has been to write and manage.

The nice thing about working within the constraints of a game jam is that you force yourself to write. That’s the whole point, right (ha)? Well, it’s especially nice as a writer because I often agonize over what to type. The number of half-baked articles, stories, and scripts I have on my Google Drive can attest to that.

I don’t have the luxury to wait for the perfect words to come out of my fingers. The story needs to get written and that’s only the start of my work. In the first three days of Ren’Py Jam, I’ve cranked out over 6,000 words and am not even at the halfway point in the story. 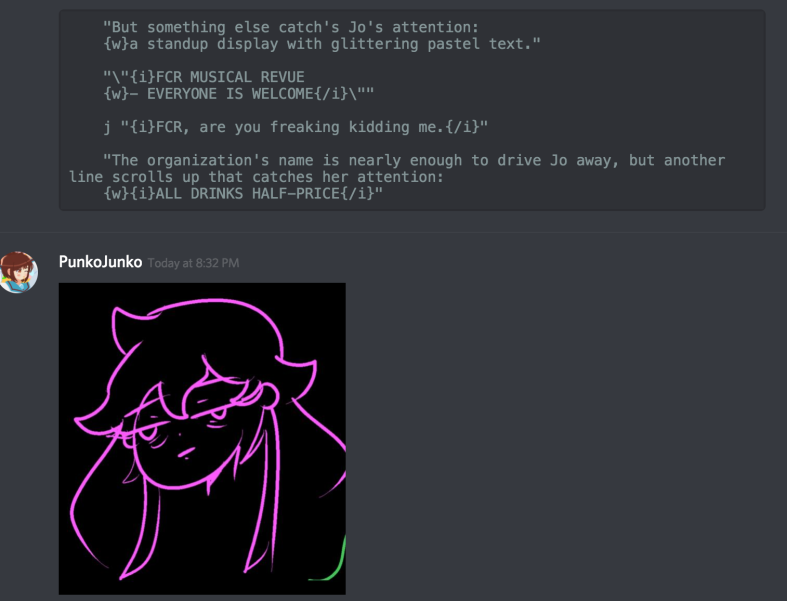 Somehow, I’ve managed to keep up the pace. Coffee shops have become my home for the past few days. Caffeine and the thin veneer of responsibility I get from working public have kept me more productive than I thought I’d be. The alternative, of course, was staying at home and passing out on my bed because I got lazy.

So, coffee shop it was.

While I’ve been chipping away at the script, my artist has been hard at work drawing up character sprites. Because he’s got school (and homework), however, his time is limited as it is. This led to our first of undoubtedly many points of contention where I was concerned the scope of our game dwarfed his work output.

In the end, we’ve continued to stick to our existing plan, confident that we can pick up the slack when the weekend hits. Hopefully by the next update I’ll have finished the story and can regale you all with programming horror stories.