Don’t blame Star Fox Adventures. It’s not Star Fox Adventures‘ fault that a design centered around gameplay that requires players to be firmly planted on terra firma was forced to change its name from the generic-but-cool-sounding Dinosaur Planet to something with more recognizable franchise ties, like say, Star Fox Adventures. Yes, it makes no sense for Fox McCloud, lead character from the beloved space shooter series to be unnaturally running around through the jungle with a magic staff, fighting reptiles and other worldly beasts instead of recklessly piloting his Arwing (much) into battle against a giant monkey man and doing flybys of General Pepper’s control tower. It may not have been the new Star Fox that everyone wanted, but that’s not Star Fox Adventures‘ fault, and one look past the initial confusion, disappointment, and subsequent unearned reputation reveals a fun and Gamecube-pretty experience taking much of its inspiration from the Zelda series, and largely succeeding.

After a seemingly interminable intro that had players taking control of new vixen Krystal, riding atop a pterodactyl and battling a massive airship before screwing up and getting frozen into a crystal (a segment that turned many off for its boring button-mashing and lack of Fox), things finally get going when General Pepper orders Fox to the planet to find out a way to save it from completely disintegrating. In the meantime, three rival tribes- the Earthwalkers, CloudRunners, and SharpClaws- are locked in a blood feud for control of Dinosaur Planet (later called Sauria). Somehow Fox must find a way to bring peace and harmony to these proud civilizations, while also restoring Spellstones to the various temples scattered about the landscape in order to retrieve things called Krazoa spirits and save Krystal and the whole world, as usual. Pretty typical stuff, really. 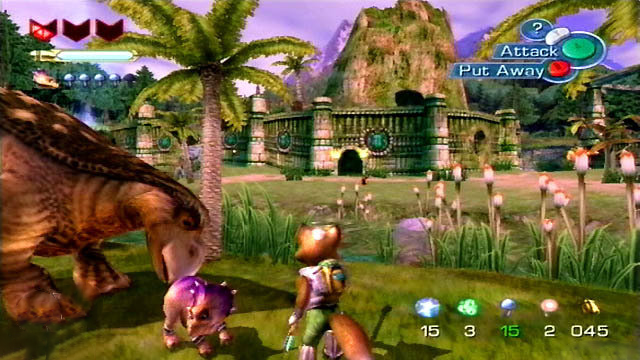 If you’re playing a Star Fox game for its story, though, I can only assume it’s because you’ve never read a book or watched a movie or played a game that actually has a good story. They’re not usually known for their narrative, other than each one being essentially interchangeable. Star Fox Adventures is different, sure, but it’s still all about the staff-swinging gameplay and exploration of a beautifully imagined world, not whether or not a certain Andross is behind everything yet again (what do you think?).

The setting of Dinosaur Planet is a rich, colorful environment to play in, a very appealing Hyrule substitute, with nice variety of areas to wander around in, including lush jungles and fiery rock wastelands. Of course all of the graphical wonders paled in comparison to the amount of care and attention paid to creating Fox’s fuzzy fur (which for all the work was noticeable for the most part only in cut scenes), a feat of hype not replicated until Retro made a very similar splash in HD with Donkey Kong Country: Tropical Freeze. With a cast of bizarre characters, including a triceratops prince named Tricky (voiced by character artist Ken Bayliss), and a giant rock monster called WarpStone that bears an uncanny resemblance to a certain character from The Neverending Story, Star Fox Adventures was a visual treat in its day, and thanks to good design, still isn’t bad in ours.

What also feels natural is the Master Sword-ish magic staff, which Fox swings with melee precision, suggesting he’s not just deadly from the cockpit. A few extra functions, like fire and ice projectiles, force fields, earthquakes, and a bunch of other useful stuff that would normally be done by Link’s various accoutrements all give off a sense of the pleasurable familiar, and the result is gameplay that Nintendo fans have been loving for years, only in a place and with characters they would’ve never imagined they wanted. And yet it works.

Strangely enough, the sections of Star Fox Adventures that feel most out of place are the Arwing stages. These short flights to get from one area of the planet to another give off the impression of being shoehorned in just to pacify purists who would never be satisfied regardless, and are easily the weakest, most repetitive parts of the game. Not full stages, these short bursts of vehicular combat simply involve blasting enemies for a minute or so until landing. Really, they seem like a distraction while the game loads its next environment, which is fine, but certainly doesn’t hearken back to the tense action its series predecessors are known for. Flying an Arwing shouldn’t be tedious filler.

But don’t hold that against Star Fox Adventures. With the rest of the game still holding up quite well, the years have been unfairly unkind to this solid title. Perhaps because of the unrecognizable nature of this Fox McCloud mission, or the disappointment in it being the last release (and only Gamecube game) before Rare’s purchase by Microsoft, the end of a prolific partnership that produced some of the greatest games of an era. Star Fox Adventures may not have quite reached those lofty heights, but it remains a worthy and underrated swan song for the storied developer, whether we wanted it or not.