Graceful Explosion Machine tells the story of a small ship with large weapons that travels from planet to planet while on a quest to blow up a whole bunch of aliens. That’s all there is to it really; the game has a laser focus on gameplay and perfecting levels to get the highest score. Each level follows the same formula, with three waves of enemies that need to be destroyed. There are multiple tools and weapons at the ship’s disposal, which gives players more than a few different ways to tackle this challenge.

Once the controls are understood and the mechanics are second nature, Graceful Explosion Machine is at first, a blast to play. Swerving through hordes of enemies while aiming and timing super attacks is an intense experience, and focus is always required just to stay alive. The game also delves into resource management, as the four super attacks share a power meter and depleting it leaves the ship with only the basic blaster to survive. It takes a lot to keep track of the blaster’s cooldown, the power meter, the enemies, and more all at once. The movement is fluid and the enemy attacks are slow and obvious, which means dying doesn’t feel cheap or undeserved. It’s a well-built game that feels good to play and even better to perfect. 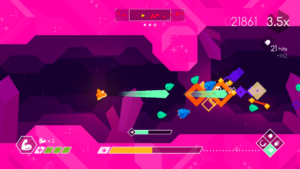 The art of Graceful Explosion Machine isn’t extraordinarily appealing or appalling, but it gets its job done. It’s a simple style with bright colors and low detail, and most objects have a unique color to make it clear what is what. The enemies can be identified solely by their color most of the time, and each of the ship’s weapons have a signature color as well, making it easy to keep track of everything in the constant chaos. Caves don’t have any strange formations or intricate detail that can confuse the player amidst the hordes of enemies, missiles, and explosions.

The biggest problem with Graceful Explosion Machine is that it doesn’t evolve past it’s first few levels.

All that said, it is still somewhat hard to keep track of the action. Even with the contrast of bright colors and basic shapes, there is so much to focus on that it becomes a struggle to keep track of everything, especially when the small green enemies flood the screen and move with little predictability. The game also has a tendency of filling the entire frame with explosions, which while being visually appealing also makes it harder to survive. It also doesn’t help that the diamond shape the game uses represents everything from enemy attacks to health pickups to you guessed it — explosions. 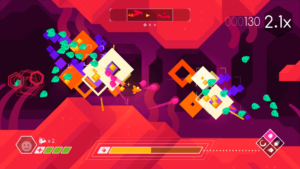 It might be easy to decipher now, but in the heat of the moment I had no idea what was going on

The biggest problem with Graceful Explosion Machine is that it doesn’t evolve past it’s first few levels. After every weapon and power has been collected and mastered, the rest of the game feels repetitive. The ship enters a minimalist cave with a layout that’s slightly different from the last minimalist cave. It shoots and dodges a bunch of enemies that spawn randomly throughout the cave until the game decides that’s enough and then gives a ranking. When the next level starts, it’s more of the same. Furthermore, the game moves so slow that most elements provide a challenge for only a few seconds. There’s rarely a new element introduced that makes the player reevaluate their tactics or switch up their strategy and worse, there are no objectives, bosses, or even story segments that break up the monotony.

There’s very little to entice the player to progress through the game besides the promise of the highest score. There’s little variety in the discovery of new levels, as each is just another cave with a different color and maybe a bigger version of an enemy you’ve already encountered. There’s no story to the game beyond an initial opening cutscene, which means no dialogue and no characters to keep the player engrossed in the world or the narrative. The only reason to keep playing Graceful Explosion Machine is to build a perfect mastery of the system and get your name featured on the online leaderboard.

Graceful Explosion Machine will entertain players for the first hour or so thanks to an art style that suits the gameplay and enough madness on the screen to keep the struggle intense but unfortunately, the repetitive nature also makes it hard to want to continue playing beyond that. In short, Graceful Explosion Machine is an enjoyable game to try, but not worth sticking around for.