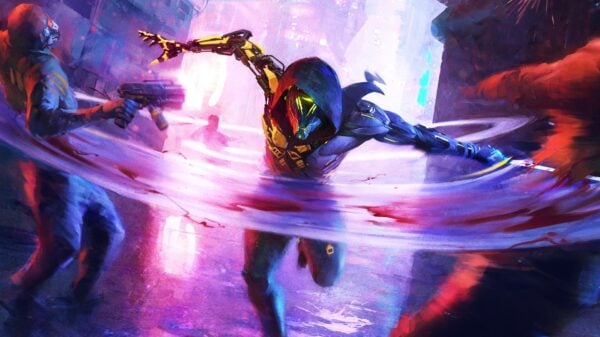 The industry has seen quite a surge of games focusing on ninjas over the last two decades, but very few tend to make the warrior’s agility their focal point. Strength is often what defines these action titles as the protagonist furiously rips through enemies at no end. Ghostrunner does indeed hop onto that killing spree but at a very slow pace as it chucks a shuriken throwing star through its competition, aiming to combine runners and platformers to ultimately flip the expected standard. It may find itself successful in gameplay and variety as Ghostrunner makes itself quite possibly one of the most distinctive action runners available on the current generation’s market, but this so-called “high-end” cybernetic post-apocalypse doesn’t fully live up to its advertising on Switch- you can probably tell where this is going.

After plunging from a tower that happens to house the remainder of humanity itself, you awaken as an advanced swordsman robbed of one limb and memory. As one of the supposed final remaining Ghostrunners, you quickly get involved in a power struggle between The Architect who created your existence and the various other rulers of power dictating the game’s setting. While the story is completely predictable and the dialogue is cheesy, the voice acting is rather notable, to say the least. It is not phenomenal or game-changing in any way, but it oddly stands out from the rest of the game as it is able to achieve a performance even some triple-a titles tend to lack when it comes to quality. The story, however, is not even close to being the focus of Ghostrunner.

Jumping, sliding, slicing, and climbing is where all of its runtime lies. There is undoubtedly depth to Ghostrunner’s gameplay, but for the majority, it sticks to what it knows best and tries hard not to exit its personal comfort zone. It is tight platforming and well-executed courses of action all the way through- and that is for its own good as it manages to stay almost entirely focused on constantly amping up its core experience with each level. It directly spotlights a player’s ability to crank up their reflexes to evade death time and time again through a methodical string of events reinforced by two safety nets, one being a short yet reliable boost and the other a slow down feature. Seeing it in action for mere seconds perfectly sums up what the whole game will have you doing until the credits roll. Ghostrunner manages to always keep the high octane chaos moving as it introduces new elements and obstacles within its gameplay.

You may be facing simple pistol-wielding guards in those opening levels, but quickly after mounted machine guns, opposing swordsman, and even the walls themselves will become your worst enemies. Platforming can be equally as difficult and rewarding as cutting down a heard of enemies. It’s a remarkable experience that thrives off player endurance as it constantly tests you to think and play differently each time you fail. Each level always contains multiple ways to clear a room that only the most experimental players will be able to properly utilize. The game barely needed to touch upon sword upgrades and new mechanics as it never fails to provide a well-balanced platforming and action experience, but it even goes as far as to include some. Not only can you upgrade some of the various quirks of your character through a puzzle board similar to Kid Icarus Uprising’s powers, but you will eventually gain access to an arsenal of flashy katanas. It is surprisingly straightforward due to its “go from point A to B” approach, but how exactly players will get there is always a welcoming revelation.

You may be thinking to yourself, “Well, what about that blunt side mentioned in the title?” Ghostrunner is a respectable game, but it has one turmoiled Switch port that makes its own advertising look like a sham. Like a dull blade, the docked and handheld version of this release is lacking any sharpness whatsoever when it comes to resolution and graphical quality. While it was expected to come with some drawbacks, Ghostrunner on Switch is extremely tough on the eyes- especially in those digitized sections taking place in the protagonist’s head, where colors focus on blues and whites rather than the typical noir and drab. The framerate is generally stable, however, I have heard that there are multiple problems across all the console releases.

This happened to be the version I personally reviewed and I can not advise anyone interested in the title to pick it up on Switch- or maybe even console for that matter as there are more than just visual reasons. Ghostrunner was clearly developed with a specific controller scheme in mind. A mouse and keyboard is the true way to play these types of games and the uncomfortableness holding a controller shows why. Ghostrunner has several controller options in its settings, but I would be lying if I did not state that I absolutely struggled grasping its various options despite mixing up my button inputs time and time again over the course of my playtime. In comparison to titles like Clustertruck that utilize similar platforming and movement mechanics, Ghostrunner felt like it was always falling short on living up to its potential optimization- but this also could just be the Nintendo Switch release of the game, although I highly doubt that.

Ghostrunner makes a notable cybernetic action ninja slice to this year’s list of some of the finest independent releases. However, it still yearns to open itself to more than just its hardcore genre fanbase. It is certainly not the friendliest fast-footed runner platformer out on the market (not even implying any connection to those console releases), but those interested in its familiar gameplay will find themselves divulged in a six to eight-hour bloodbath of revenge entertainment. If you enjoy games like Stride, Mirror’s Edge, Cluster Truck, or even something like Superhot, Ghostrunner will be absolutely worth your time as it manages to elegantly combine some of those titles’ most enjoyable elements even when it falls short. Just be sure to not play it on Switch as you are going to want those significant resolutions and framerate upgrades, along with perhaps some other control scheme options.