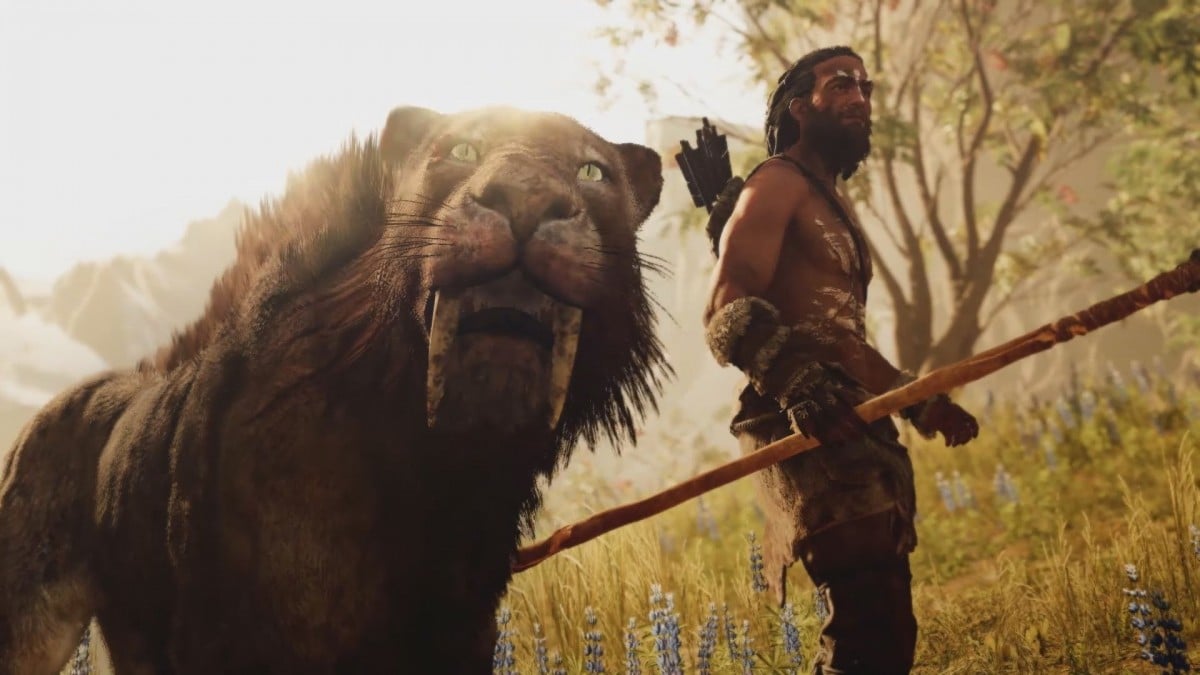 Far Cry has always been a strong competitor in the games market and they have continued to thrive in this position with the release of Far Cry Primal. Ubisoft has really put themselves out there and literally stripped the game down to the basics and surprisingly, it really works.

The prologue introduces you to your small tribe who are hunting a herd of Mammoths. One thing leads to another and you somehow end up separated from your tribe – no spoilers here. This is where you happen upon another abandoned tribeswoman who encourages you to build your own tribe with her, and this is very much the premise of the game. Much like its predecessors, your goal is to take over these different camps and claim them for your own. The ‘Satellite’ tower is now a beacon, unfortunately, these are now less of a challenge, but the puzzling climb to the top of the satellite helps to break away from the constant gun action. For Primal, the satellites/beacons are merely resting on top of a hill protected by two or three enemy tribesmen. The camps are much more similar to the previous games, each has a set difficulty so you know where to go when you’re feeling up for a challenge. The harder the camp, the more ‘special’ enemies there are, such as ‘brutes’ and ‘pyros’ and also there will be more alarms to call in reinforcements.

In comparison to the previous Far Cry games, the storyline for Far Cry Primal doesn’t feel as rich.

The way in which Ubisoft integrated the use of an eagle in substitution for the binoculars works really well. Like the binoculars, the eagle tags your enemies so you know what you’re up against. One of the issues with the eagle is that some people might find that it is harder to tag enemies due to the player simultaneously concentrating on flying without crashing, whilst also looking at the ground. Also like binoculars, you and your eagle can sometimes be at a huge disadvantage, this being that if the tribe you choose to attack is underground you cannot mark them. As you level up, you gain the ability to allow your eagle to attack unsuspecting victims and even drop bombs on tribes. The introduction of the animal companion is amazing, and you will find yourself spoilt for choice. These animals range from a bear to a badger, covering every hostile creature on the map. The best part is, you can capture and tame your own companion, so you can even get super attached to it when it dies (don’t worry, you can revive your loyal pet with meat and herbs). And if you’re missing out on the jeeps or tuc tucs, you can ride your bear companion, or a mammoth into battle. 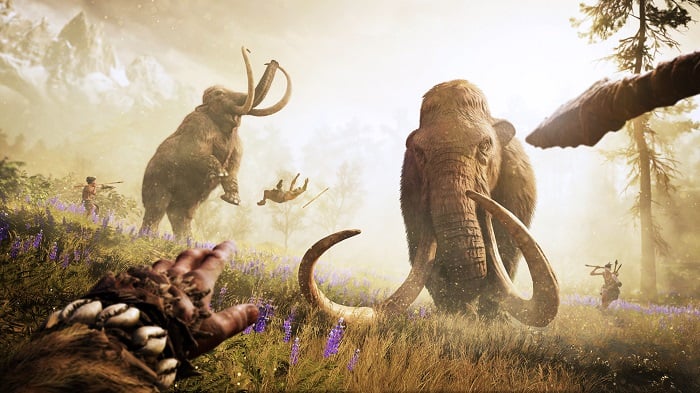 In comparison to the previous Far Cry games, the storyline for Primal doesn’t feel as rich. Whether this is because the earlier storylines are much better, which is understandable as they can’t exactly go into much story depth for a bunch of Neanderthals. The antagonists are also less interesting than Far Cry 3 and 4. Sure, they are primal cannibals, but this is expected of someone living in the stone age lacking in basic human emotion. The psychopathic tendencies of the likes of Vaas or Pagan Min are far more in-depth in comparison.

Ubisoft has really tried to create the realistic feel of being in the actual primal age and have even gone to the extent of creating their own language. All dialogue is subtitled and this goes to show the extent of the effort that the company put into every aspect of the game, as the game wouldn’t be what it was if it didn’t have this unique language (it would look a little weird if a bunch of cavemen were fluent in English).

Now to the interesting bit we all want to know about: the weapons. The mechanics of the game are simple, very basic weapons, and majority melee for obvious reasons. Thankfully they have still kept that all-important crafting element. It really seems that most modern games have donned this crafting element just as a little added extra, and for some games such as this one, it works pretty well. Others have not been so successful and seem to be jumping on the crafting bandwagon. Primal has used it to craft the likes of triple arrowed bows, bombs, and weapon mods. The bow will always be a classic and the developers managed to make the handling for it very straightforward. Most players feel they are skilled bowmen from the second it is equipped. Other weapons range from the likes of a small dagger to a large two-handed club, which can all be set alight at your choosing. Primal has still included the must-have for agile gamers: the take-down option, giving players the ability to conquer an entire camp without sounding the reinforcement alarms. Despite the array of weapons, some players may find themselves missing their precious grenade launcher in all its overpowering glory. But then again, you can just set your saber-toothed tiger on them!

I'm a super girly girl until you see my games collection, if I'm not too busy painting my nails I'm probably out saving the world, or just writing about it.