When it comes to DLC, quality can be extremely variable: from the notoriously absurd, such as the horse armor in Bethesda’s Oblivion, to the utterly sublime like The Witcher 3: Blood and Wine. When full-blown expansions went the way of the PSP, developers and publishers became accustomed to increasingly regular injections of post-launch income. Public opinion fluctuates on the acceptability of DLC. Some see it as a way of prolonging the lifespan of a game and extending its relevance. Others view it as ruthless profiteering via the piecemeal launch of previously cut content to justify the season pass cost.

Whether you love or hate the concept, it’s an established industry practice and it doesn’t look like it’s going to stop anytime soon. Ubisoft have refined the development of open world games to the point that it’s almost an exact science, but their track record when it comes to DLC is somewhat spotty. Never a company to willingly buck market trends, their shelf-life extending offerings have ranged from the dire to the excellent. They set a high bar back in 2013 when Far Cry 3: Blood Dragon boldly proclaimed that neon-drenched, arcade madness was still very much in style.

Since then their DLC releases haven’t been all that special, with the exceptions of The Hidden Ones and The Curse of the Pharaohs; both of which were excellent additions to the already fantastic Assassin’s Creed: Origins. Whilst they’re not above bombarding customers with bundles of cosmetic items and high-grade loot for cash, Hours of Darkness – the first piece of new content for 2018 game of the year contender Far Cry 5 – proves that the company is still capable of creating top drawer DLC.

As if the amount of time I’d spent shooting, stabbing, blasting and gliding my way across Hope County hadn’t already placed enough of a strain on my schedule, Hours of Darkness was poised to absorb even more of my time. With a running time of between four and six hours, that’s an entire evening just vanished into the mist-draped jungles of Vietnam never to be seen again. Do I regret it? Not even for a second. 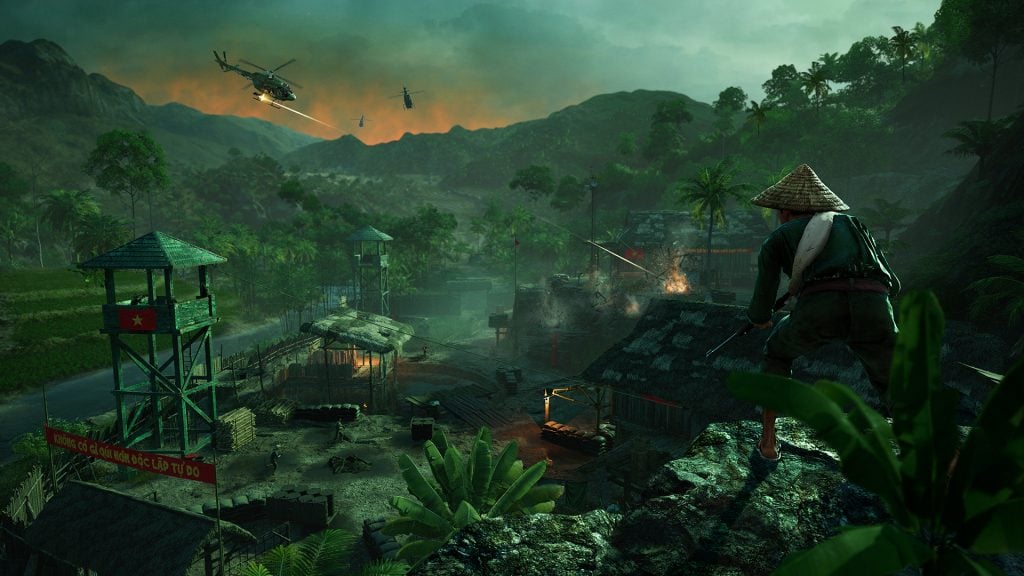 The premise of the DLC is as light-weight as they come. You’ve crash-landed behind enemy lines at the height of the Vietnam war. Your only real objectives are to locate your lost squad mates and try to escape alive. Sounds simple, doesn’t it? It’s anything but. The enemies in the base game were never much of a problem. Even a heavily defended base could be easily conquered with the assistance of your trusty companions and the kind of firepower that only an American would be proud to own. The soldiers in Hours of Darkness are ruthless, efficient, and relentless. You might think you’ve got the drop on an isolated squad but one botched stealth kill later and the engagement has rapidly escalated to the point where an entire platoon is out for your blood. Due to your relatively limited weaponry and more realistic load-out options, such ramping up of the action really forces players to pick the best moments to strike and sometimes to even avoid confrontation altogether.

The dense foliage and murky villages of the Vietnamese countryside may not be as varied or as visually appealing as the vibrant locales of Far Cry 5 but they never want for ambiance. As the story takes place over the course of a single night, the game world starts hidden in almost total darkness with light levels gradually increasing toward dawn as you approach your ultimate objective. It is a shame that so much of the landscape is perpetually hidden, as what you can see is visually distinctive and definitely sets itself apart from the earthy color palette of backwoods Montana.

I can’t help but feel it’s a missed opportunity, but that’s because I really wanted to see more of this environment rather than a reflection on the quality of what’s on offer. That is one of the best parts about DLC though for both gamers and developers. Smaller more tightly controlled and intimately designed environments give the developers a chance to experiment with ideas that go on to inform design decisions for their next big title, and offer players the opportunity to jump into an entirely fresh sandbox. 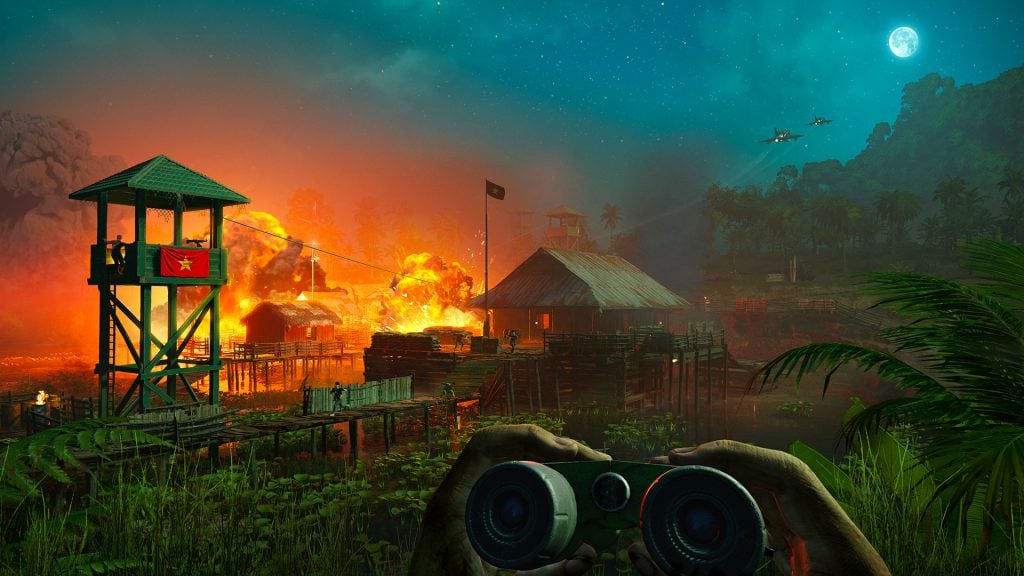 As more and more of your surroundings are revealed there is a palpable sense of relief but also of exposure, as the increased daylight makes it easier for you to be spotted. The result is a gameplay experience defined by stealth much more than you would expect from additional content for a game that expected and encouraged you to go all-out in pursuit of your objectives. The unlock system has been replaced by the incremental enhancement of performance related perks that grant you a series of benefits, such as auto-tagging enemies and faster movement, as you maintain your stealthy kill streak. As soon as you’re spotted, however, those perks disappear.

It’s a worthy incentive to focus more on sneaking around the battlefield and making sure you’re in the best position for each assault, and it would be interesting to see how such contextual bonuses could be applied on a broader scale in a full-scale title. Combat is always tense and rewarding if well-executed, but admittedly it can feel like an exercise in frustration if you’re spotted before you’re able to put your plan into action. Beyond the increased requirement for stealth, the core basics of the by now well-established Far Cry combat remain unchanged. It’s more of the same and that’s exactly what makes it work. As much as we gamers like to bemoan the lack of “innovation” on the part of developers, we are also creatures of habit. If a formula works then there is little point in developers straying from it too far, unless they want to intentionally provoke backlash.

As the first DLC from the Far Cry 5 season pass, Hours of Darkness, is somewhat underwhelming; but that is not a reflection on the quality or quantity of the content it provides. Far Cry 5 was so excellent in and of itself that anything that followed it could only be considered less by comparison. As something a little extra, this jaunt back in time to a snapshot of one of the most disastrous military campaigns on American history, proves to be an enjoyable and exciting addition to an already stellar game. If the next two packs, Dead Living Zombies and Lost on Mars, are anywhere near as good then together the three might just constitute the strongest suite of additional content to be released for a single game since CD Projekt Red finished up work on their Witcher 3 DLC. Hours of Darkness may not be anything particularly special, but like all DLC it did exactly what it needed to do. It brought people back to the game, kept them talking about it, and more importantly kept them playing it. Could it have been better? Yes, but at a price that would likely have been too damned high in both developer time investment and consumer financial outlay. As it stands, it works and it’s good enough to more than justify the purchase.