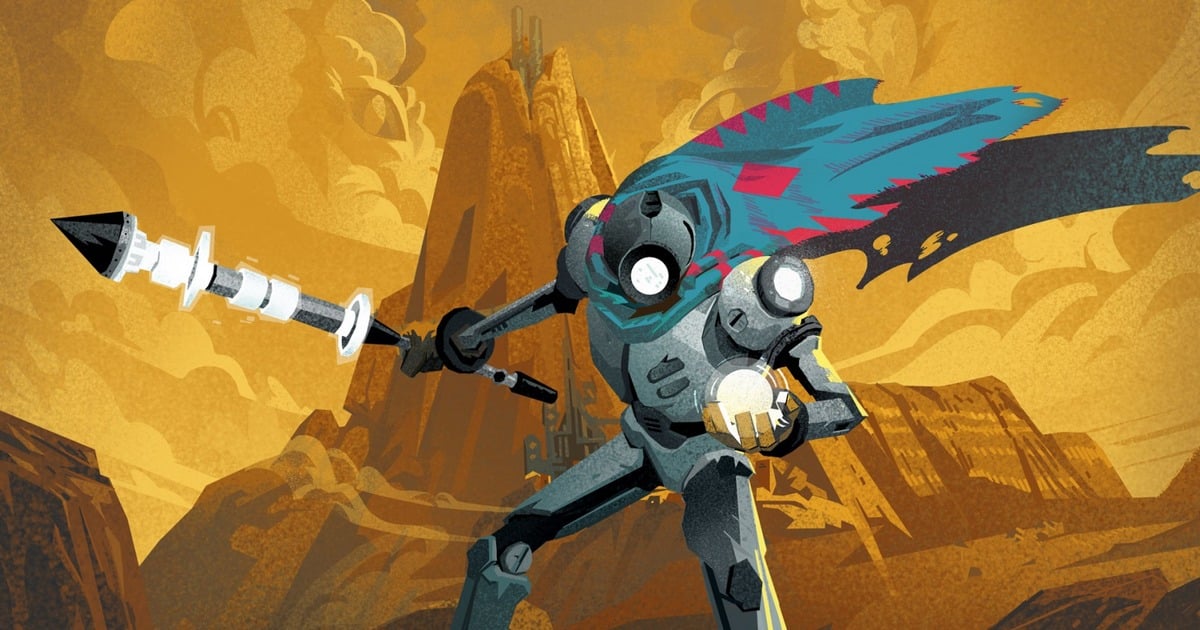 A top-down, pinball-inspired, hack-and-slash dungeon crawler? That certainly may be a genre combination never done before. But in reflection to the sciences of chemistry, sometimes grouping elements into a mixture can create something that is definitively unique and distinguishable from its initial ingredients. Creature In The Well is a whole new breed of game design — by blending various genres, developer Flight School has created one of the most distinctive and satisfying puzzle games in recent years. The closest comparison you can probably make is if Hyper Light Drifter collided with a classic pinball cabinet and Breakout.

Creature in the Well tasks the final remaining BOT-C unit in a mysterious world to venture into the desert mountain that lies in wait next to the imprisoned city of Mirage, a land captured by a deadly sandstorm. Inside the mountain rests an ancient facility in need of power; but there’s also a fearsome creature who stuck in a state of despair. It is the bot’s job to reboot the machine, stop the monster, and save the city of Mirage from the never-ending storm that shrouds the land.

Although it may sound like a hack-and-slash dungeon crawler, Creature In The Well is not a test of strength against all odds; it’s a quest of knowledge that utilizes timed actions. The BOT-C unit is not on a bloodlust to its goal; it’s in a fight for survival through various puzzles that demonstrate adaptability. The game is a test against the active mind.

After obtaining a sword and learning quicker means of movement through dashing, it would be easy to assume that fighting comes next. However, the reality of the situation is that the BOT-C unit’s sword and secondary weapon are never swung directly at an opponent — not once throughout the entire journey. Instead, weapons are used as flippers in a sort of active pinball game, continuously knocking around orbs of energy at various machines that will grant voltage. This energy must be spent to open hydraulic doors throughout each dungeon that block progress, but it can also be used to upgrade the BOT-C unit’s gear via a blacksmith, or to find upgrades secretly scattered behind different pathways. The more thoroughly a dungeon is explored, the more voltage there is to claim from conquering puzzles of higher difficulty.

The environment then ends up becoming the greatest threat, as there are no true enemies to wield weapons against. A variety of projectiles can cause damage, forcing players to move around. Well-placed shots and timely swings are the keys to progression, and the only way of reaching the endgame. Adapting and using creative ways to solve puzzles is the foundation of Creature In The Well. Mastering Breakout and Pong-like movements for multiple projectiles at the same time is the recipe for success.

Creature In The Well makes magnificent use of the Unreal Engine, showcasing a nightly overcast atmosphere with a bleak, dark color palette, but it also manages to remain bright and colorful thanks to the illuminating projectile lights and flashy animations. This ultimately amounts to a game that is not only satisfying to play, but satisfying to watch. It’s a distinct art style that is welcoming to the eyes rather than a confusingly chaotic bunch of unrecognizable firefights.

Creature in the Well urges players to progressively think smarter as they traverse the eight vastly different dungeons. Each puzzle room slowly improves upon the last, as the game consistently and smartly reuses mechanics while introducing new gimmicks to accommodate the metronome-action movements. These gimmicks can range from the way in which energy orbs damage to adding new obstacles like electrical flooring or spiraling death traps.

Puzzles can progressively become more and more challenging, but most are either not mandatory or don’t need to be completed immediately, as there are branching paths and enough energy to skip some roadblocks. This ultimately comes off as a negative or positive aspect depending on the individual player, as puzzle difficulty drastically changes depending on the order in which dungeons are played. Creature In The Well’s lack of a recommended dungeon order might make you work harder in the early-game, which results in a rather carefree late-game that sees you blasting through puzzles with ease — or vice versa.

On the other hand, this gives the player breathing room, allowing them to experiment with routes and return to previous challenges. Skipping or leaving puzzles unsolved lessens opportunities for rewards, so a handy in-game map system allows players to keep track of exactly where they have not completed rooms on designated paths. An unyielding challenge can become an underwhelming enigma with proper dedication and practice. That said, although the endgame can become less challenging than the beginning, the pinball-inspired mechanics are so entertaining that a decline in difficulty never truly becomes an issue. Creature in the Well is never a slog to play through, even when revisiting old dungeons in the latter half of the game.

All of these dungeons conclude with thrilling matchups with the main power sources, as well as the creature who lives beneath the land. Creature In The Well does not have what many would consider traditional dungeon crawler boss fights, but simply sticks to a its puzzle gameplay and challenges players with a larger and more complex version. These battles involve the creature, who extends its arms from beneath the dark abyss in an attempt to attack you.

Creature In The Well is a captivating case of a fresh experiment gone right. Flight School took risks in attempting to dabble in multiple genres at once that seemingly don’t correlate to each other. Yet, the end result is a fascinating concept built on the gorgeously-used Unreal Engine, with the potential to be further expanded upon. Albeit short, the journey to delve into the deepest parts of the mountain to solve new high-speed kinetic puzzles while avoiding a mysterious, calamitous creature never grows stale over the 5-7 hour journey. It is by far the most distinct ‘break the mold’ type game to be released this year, and an absolute must-try for audiences of both the pinball and puzzle game genres.