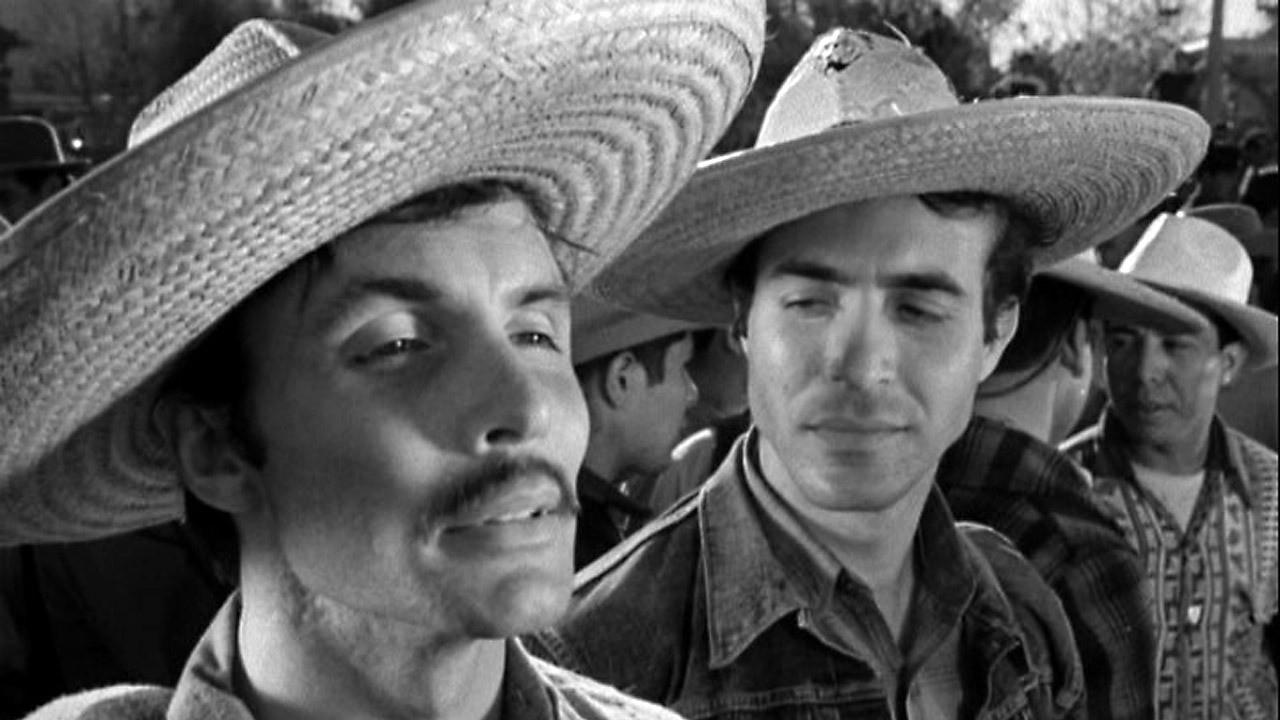 The Mexico-United States border has long been the subject of controversy when discussing the arrival of those described as ‘illegal aliens,’ desperate individuals from Mexico who traverse the border without proper permission in the hopes of finding some work and money to send back to their families, while others hold to grander notions of completely starting anew. Whatever their reasons, those who venture illegally into the United States put themselves at risk, not merely of the border patrol forces, but also of the employers who willfully take advantage of their fragile state. In Border Incident, workers who slaved away in the agriculture fields in Imperial Valley are slaughtered as they traverse shadowy, rocky valleys at night on their journeys back to Mexico. In a joint effort to cease the abuse and to put the ‘law’ back into ‘law and order’ Mexican agent Pablo Rodriguez (Ricardo Montalban) and American agent Jack Bearns (George Murphy) are sent to infiltrate the most notorious of the gangs exploiting the desperate workers. Through an dark and dangerous journey, they eventually come face to face with the puppet master, Owen Parkson (Howard Da Silva), whose top dogs practically relish in the hardships they poor onto their slaves.

Anthony Mann, a smart storyteller capable of handling all sorts of different film genres, creates a really solid, appropriately violent film that fits in nicely within noir. When someone says ‘film noir’, the thoughts and images this reviewer’s mind immediately conjure up are those of shadows and light playing off eerily against one another and creating an arena in which sad, tough and unhappy characters try to escape said shadows and re-discover comfort in the light. What the viewer is therefore left with is a filmic experience which is dual layered, one visual and the other being story-driven. Border Incident, although produced for a modest budget, delivers on both of those fronts in some exciting and memorable ways. No film is perfect, and Anthony Mann’s picture does suffer from some unfortunate decisions, but on the whole the film leaves the viewer with both a sense of satisfaction in the quality of the movie and one of frustration as to how things turned out for some of the protagonists, which is equally important in a film of this kind.

Border Incident does not shy away from the grim reality of the world it represents on screen. The harshness of the misadventure the workers live through as well as the bitter end many of them meet is on full display, with director Mann and his technical crew developing the a proper tone for the story, helping the viewers immerse themselves in the experience. Many of the violent sequences during which people, both good and bad, are killed off come bathed in rich blacks and beautiful shafts of light piercing through just enough for the viewer to fully take in the grisliness of this sort of life. Every time the film reverts back to the canyon valley where the murders are committed, the quality of the cinematography is given a boost with the help of spooky shots brought to light with some excellent use of depth of field techniques.  There are perhaps hints throughout the picture which reveal the budgetary constraints experienced by the crew, and especially cinematographer John Alton, but either this movie reviewer’s eye was not sharp enough to detect them or the efforts to cover up for the short change was excellent. The desert like terrain just outside of Imperial Valley has a particularly grim aura about it, reminiscent of the desert plains characters of Leone’s Dollars Trilogy risked crossing. Grim, but terribly enjoyable to watch. The ominous nature of the film permeates in the actual plot, which has agent Rodriguez pretend to be a desperate worker in need of money who earns a spot on Parkson’s ranch. His segment of the story provides an inside look into the seedy practices exercised by Parkson and his organization populated by crooks rather than actual businessmen. The condition of the workers are pathetic, but everybody wants to get paid, so young and old are tempted by the prospect of work. In some instances, the old fail to even survive to truck ride to the ranch, succumbing to poor health. Montalban plays Rodriguez with some gusto primarily because the character of Rodriguez is pretending to be somebody else, a willing and desperate farm employer. His American colleague Bearns, working more on the outside as a man offering Parkson some much coveted workers permits, gets to study the operation from the viewpoint of the bosses, the masters. George Murphy displays some tough guy bravado and courage when his characters is under heavy questioning from those he wants to bring down. Each actor has to tread carefully bringing to life two characters, alter egos if you will.  Both paths are dangerous (it is always the case with undercover missions anyhow), and present thematically different but closely intertwined versions of the overarching mission. Rodriguez is in the trenches with the slaves, while Bearns destabilizes the organization from the top, where one need not get their hands too dirty. In both cases a false move can prove to be fatal, and each plotline compliments the other nicely. Montalban gives the slightly superior performance, the reason being that his character is thrown into the more precarious situation, therefore more intensity is asked of him. The lone strike against his portion of the story is that Rodriguez and the other workers converse in English with Hispanic accents, a decision one assumes was made to avoid having movie goers flock away from the ‘oh so terrible chore’ it is to read subtitles. It is not a decision that requires an exorbitant amount of time to deride for does not distract to the point where the film is unwatchable, but it remains a blemish nevertheless.

A plot about border patrol is a delicate proposition and must be handled with a level of care. One would not want to fall into ridicule with disingenuous portrayals of Mexicanos, stumble with overly patriotic ‘protect our border!’ didactic messaging, or myriad of other potential problems. Anthony Mann shows intelligence and wit with his adventurous yet complex tale. The protagonists are performing their tasks with a sense of honourable duty. What is happening is wrong on a humanistic level and on an economic level. It is a story that could have revolved around any sort of illegal labour situation around the globe, but its preference in tackling the often sensitive Mexican-American border relationships is worthwhile. Hostility is shown towards the labourers, but at the same time the gangs need them. Border Incident taps into a long standing hatred and fear of the illegal immigrants, but wraps the subject matter with the eerie blanket of film noir qualities. The result is a movie for which the accomplishments are twofold: it can be taken as a thrilling suspense film which in of itself is a great thing, but if one takes a moment to look a little bit closer, it also raises pertinent questions that remain important till this day.