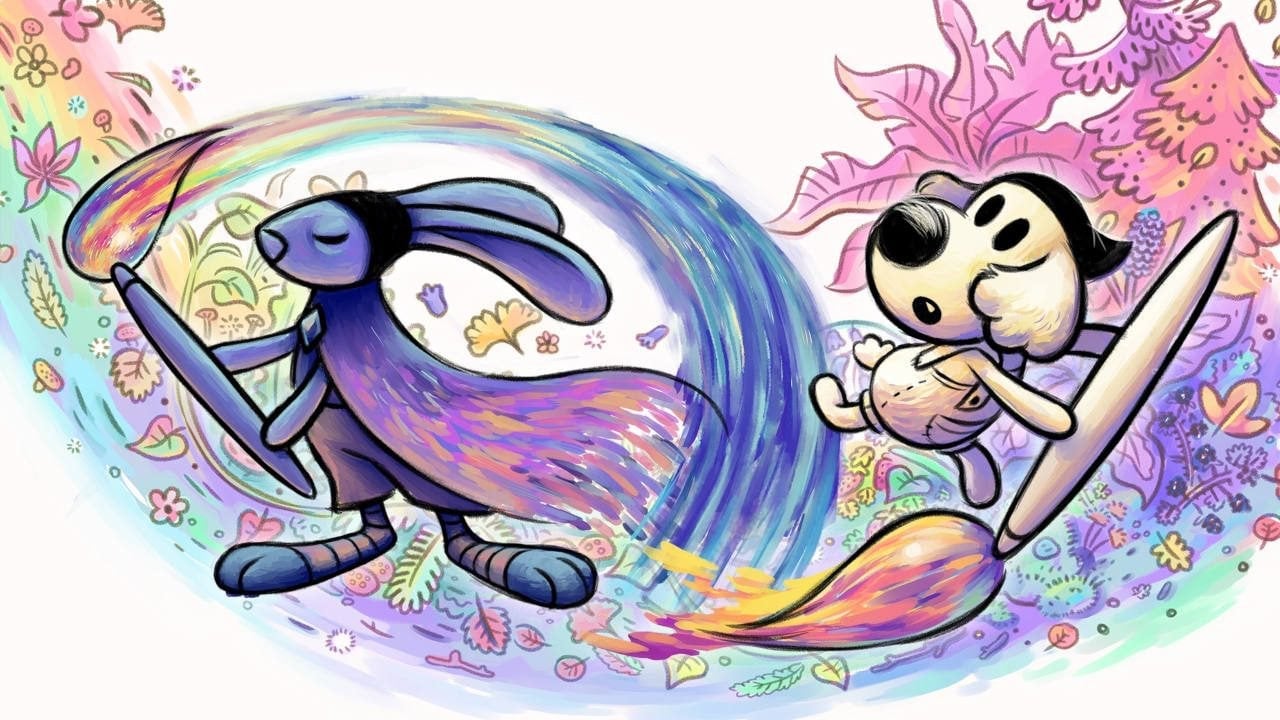 Released just before an overwhelming bucket of shadow-dropped titles during E3, Chicory: A Colorful Tale is a crystal clear palette of glory amongst the masses. It may seem simplistic with its monochrome screenshots and ideas of helming both a color painting tool and story-based design, but make no mistake, this latest deceptive indie adventure is a beautiful showcase of art — a true Leonardo da Vinci of the lot. With the current technical marvel of games being paraded about during its launch time, this approachable tale of one aspiring artist absolutely nails all of its ambitions. Packed to the brim with adorable characters, relatable narratives, ambient gameplay, and a lovely soundtrack from the genius mind of Lena Raine, Chicory: A Colorful Tale knows how to elevate its craft. It is a vivid stroke of brilliance.

Chicory: A Colorful Tale aims to surround itself with the key philosophies of presentation in art. Emotion, color, narrative, and inspiration drive every aspect of the game. These ideas beautifully tie together the admirable picture it creates. As the player sets out on a quest to repaint their world from a darkness that is growing across the Picnic Province, it is their job to resolve any and all problems ahead through the tip of a generational brush. Taking up the mantle from a depressed master paintbrush wielder named Chicory, the protagonist (who is of unspecified gender and adorably named after your favorite food) must come to terms with the hardships of placement in reality and ownership to save the world. By brushing over a black and white world Chicory: A Colorful Tale succeeds in asking players to relax and enjoy their creations while unraveling a future psychological catastrophe.

While the story and characters of Chicory: A Colorful Tale do take a primary focus, the puzzle-solving, collecting, and legitimate artistic capabilities of the gameplay are not simply presented as secondary colors. A cutesy world and seemingly for-all-ages gameplay mechanic are its most impressive highlights that rival its incredible narrative. Exploration and creativity drive this RPG to fame as players control a standing dog in customizable clothes through a suburban world. Discovering new brush patterns, clothes, placeable items, and litter to recycle are objectives many players will find themselves indulging in for hours like most other games of its genre, but painting is at the source of the title’s mechanics. Painting is used to both solve puzzles and create whatever players desire as the game emphasizes player enjoyment over all else.

The player is given a distinct palette of choices, shapes, and patterns to utilize as they progress through the world and become better artists. Every single inch of the game can be painted over leading to a title that not only inspires creative freedom but utilizes its liberties at every angle. Whether players would like to use Chicory: A Colorful Tale as their own playground, fill it in like a coloring book, or just play through the story without flaunting their art is completely up to them — either way, the game’s look will be individualized while the puzzles and story remain the same. The color of every character and the resemblance of each building is entirely that of your own. Chicory: A Colorful Tale is constantly catering to individuality as Picnic Province can be your Vincent Van Gogh or Jackson Pollock. Making genuine art is more than possible with the core paintbrush mechanic as different brush sizes and colors are always at the player’s disposal, but it would be undeniable to say that a choice of controller could be a slight hindrance to the experience.

The only area where Chicory: A Colorful Tale struggles in its gameplay can be with its controls — at least partially, as this fault is to be expected with console players specifically. Making an art tool with a controller is an extremely difficult task and while moving the player character around and doing basic puzzle-solving is undoubtedly as smooth as butter, painting pictures is not always as gentle and precise as a real artist. Chicory: A Colorful Tale is certainly a game that would likely benefit more on PC due to a mouse. While there are peripherals that players could use to create a perfect experience on PlayStation 4 and 5, it is a shame that a controller — even when utilizing something as sophisticated as the Dualsense — can still often get in the way of specific gameplay moments. It can be difficult to paint one-to-one accurate creations on the spot, nonetheless, the imperfect way of control is still exceedingly fluent.

On the topic of painting, the world is Chicory’s Mona Lisa — it is its magnum opus. The game never fails to please when it comes to every aspect of building its world that is flowing with tangible emotions. Not only do characters have believable story arcs that are well-developed and relatable, but the order of events the narrative upholds will never pull players out of the immersion. Like other independent games like Celeste, Chicory: A Colorful Tale understands its sensitive topics and goes to great lengths to explore them. Never do its choices to embrace topics of depression or repression falter as it strives to bring in multiple perspectives of characters and touch upon proper solutions to their life issues.

The protagonist may act like a wannabe hero aspiring to drive others, but even they face their own real problems that players will more than likely find relatability in. It is easy to connect with the saddest, comical, and even monotone characters of Chicory: A Colorful Tale. No one in the title is presented as a perfect animal, which helps greatly humanize the entire anthropomorphic cast. The game is constantly developing its profound narrative, allowing a seemingly initial goofy tale to rapidly transform into an emotionally multi-chaptered adventure. It would be a crime to touch upon any of the stories of the leading characters as players deserve to experience the grandeur of these heroes themselves.

On top of a visually and legibly heart-touching world, composer Lena Raine (previously worked on Minecraft and Celeste) has also done an outstanding job at bringing this universe to life. Like her previous work, the orchestrations of Chicory: A Colorful Tale always help enhance the game’s tone as they range from beautiful and peaceful to intense and mysterious. The music artist has once again orchestrated a soundtrack that will have players’ ears locked in well past the end of their adventure. In the same fashion as the soundtrack though, between gameplay and story, Chicory: A Colorful Tale is a weighty adventure that constantly givesng players something to cherish. Whether you are able to cope with the story of Chicory or have found a way to express your creative talents that double-down for impacting a world, the game always feels meaningful no matter what it is doing.

Chicory: A Colorful Tale paints a perfect picture. Outside of the fact that its controls may pose hindrances for console players, it is a heartwarming experience exploding with vividness and creativity from beginning to end. From its beautiful hand-drawn graphics and vibrant world to the heartfelt story and characters worth investing time into, this indie title from Greg Lobanov and his close friends masterfully captures a tale audiences invested in narrative-driven games and painting should be immediately jumping on. Its aspirations culminate into an emotional venture that is nothing short of beautiful for those able to connect with its melancholy albeit hopeful themes of depression, repression, and drive. Chicory: A Colorful Tale is a wonderful work of art you should not and can not miss. It may just be the best game released yet this year.