Note: This article contains some spoilers for Chapters I and II.

One minute, Arthur Morgan’s hog-tying strangers – the next he’s sketching animals and lamenting his questionable life decisions. In playing Rockstar Game’s newest title, Red Dead Redemption II (2018), it’s difficult not to be enamoured with this outlaw protagonist’s journal. Though notes and personal observations are by no means a rarity in video games, the inclusion of such a personal, interactive item for the self-proclaimed ‘bad man’ Arthur adds an extra dimension of humanity to his character. It’s a device that reinforces the masterful characterization present in this title, and as a result, deserves some celebratory exploration.

When we first meet Arthur Morgan and the Van der Linde gang, they have just escaped by their tails into the Grizzlies – a ficticious version of the American Rockies – where the spring climate continues to bring great hardship. Their priorities are, understandably, more focused on immediate survival than making bank, with exposition on their previous, indecent deeds as blanketed in silence as the trees surrounding them are covered in snow. It’s not until the gang successfully escapes the chill of the mountains and settles on the outskirts of humble cattle town, Valentine, that the brutality of the gang’s culture comes to light. Arthur’s actions are no exception to this. Though not seeking out a brawl in his visit to the town’s saloon, Arthur quickly finds himself in an altercation with a saloon regular, resulting in him beating the man to a pulp in the muddy main street, the final blows only just interrupted by a kindly bystander. A visceral scene, there’s a certain obscenity to it – a strong depiction of the toxic masculinity that Arthur encapsulates in his role as an outlaw.

Now, given this is a game about redemption, there is a certain space of disbelief or disconnect that occurs when the violent actions of the protagonist challenges what the protagonist is espousing within the narrative. Arthur’s journal is available for the player to peruse from the get-go, and generally implements three main functions. The first function is the one that most long-form notes/summaries in games tend to include, that is, to remind players who can’t pick up the title consistently and/or find themselves deviating from the main quest of what is happening within said quest. The second function is to detail player achievements (more on that later). Finally, the third function is to suture the space I mention above, attempting to align the dissonance between the Arthur Morgan who engages in dishonourable actions, and the Arthur Morgan who quietly contemplates the relative fragility of the life of an outlaw. 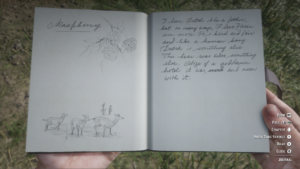 As Arthur commits horrendous acts throughout the game, his journal tells another story – the tale of a man who is increasingly disillusioned with his life path, one in which the looming spread of modernity and industrialism demands swift extinction. Following story missions, Arthur will typically write an entry summarising what happened, and how he feels (or rather, laments) about his actions – and those of others. Arguably, the most intriguing details are those that expound on the feelings Arthur has towards other characters, particularly Dutch van der Linde, who plays a role as both a father figure and an employer, resulting a strange, complicated dynamic between the two. Laced with richer exposition and foreshadowing, Arthur’s written entries on the camp and its characters adds an additional layer to understanding Arthur’s (and others’) place in the dying West.

Arthur’s journal also acts as a compendium of the player’s achievements, with studied animals, optional side-quests, common (and uncommon) locations, and endearing sub-characters put down, whether in-text or in the form a sketch. There’s no absence of talent here also, with the entries and sketches surprising in their overall emotive quality – the journal feels like the emotional reprieve, a place where Arthur can be thoughtful, conscientious, and even a little more sensitive than the sometimes brutish, mean image he presents externally. It’s also a refreshing change to viewing achievements in games generally – rather than implementing something as ubiquitous but ultimately, tired, as a trophy, there’s a certain satisfaction in seeing your achievements presented in a more creative, interactive form. Above all, there’s this clever duality concerning identification facilitated by the journal. On one hand, it is the player’s journal and a symbol of their unique, subjective playthrough – yet, it’s impossible to emancipate it from the character that is Arthur Morgan and his internal conflicts and external struggles. 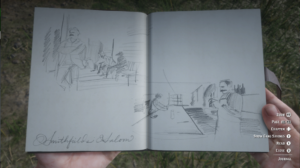 The quality of the journal’s details only increase its intimate and emotive presence.

These insights into the Arthur’s ‘true’ thoughts about his relationships, the shaky trajectory of his life, and the sights, creatures, and strangers he has met, have culminated in the creation of a highly nuanced, familiar character – it is difficult to not feel as if I know Arthur, and more importantly, his desire to redeem himself. The implementation of a such an intimate storytelling and characterization device is one of the highlights of Red Dead Redemption II, and is a testament to stunning detail Rockstar Games has achieved with this title. As a player, I felt it effectively bridged the space between narrative and character/player action that does at times present itself as a limitation to the title’s primary theme of redemption. Overall, this device presents numerous possibilities for developers in the future, particularly if audiences continue to demand grand-scale titles with narratives to match.