It is fun to be a cat. Cattails is a unique survival-sim with light RPG elements and loads of charm. The stylish indie bears striking resemblances to Stardew Valley but manages to claw out its own kitty cat path to make an enjoyable experience that is well-suited to The Switch. 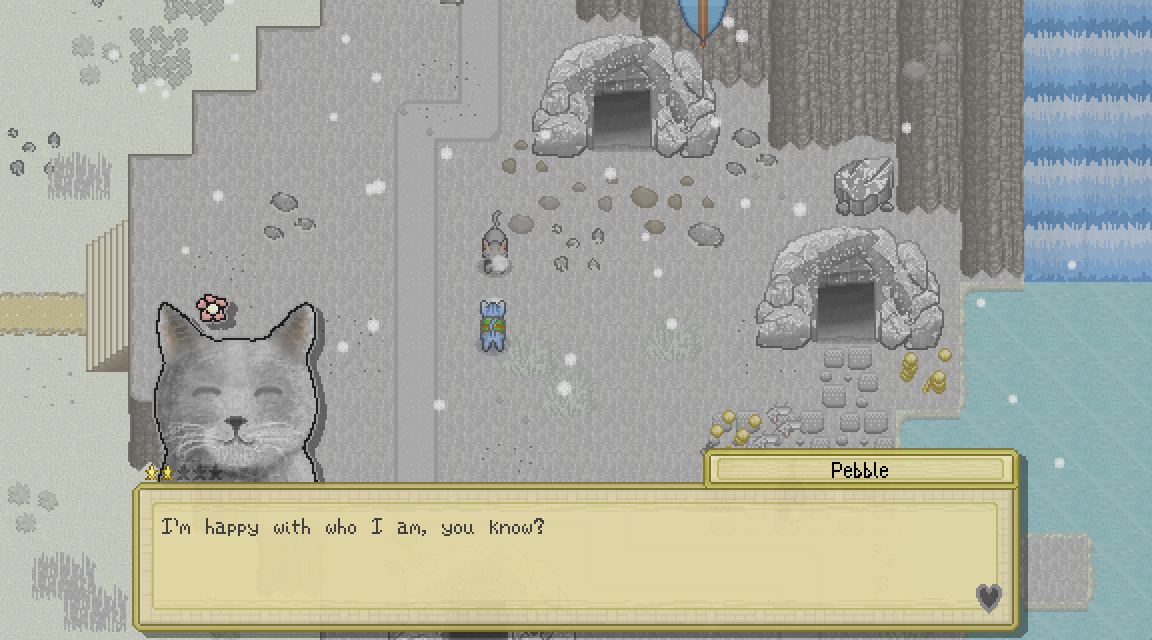 In Cattails, you are a kitty cat who is lost in the woods. You must find a clan, learn to hunt, and learn to survive the surprisingly unforgiving wilds. Once you’ve got your paws bloodied, a larger quest emerges and it is up to you to help restore balance to the forest while keeping your feline charge well-rested and well-fed.

Cattails begs comparisons to the dearly-admired Stardew Valley, another little life-sim that explores the life of a little human farmer in a town that needs to get turned around, and it has clearly influenced the developers, husband-and-wife team Falcon Development. The similarities between the two games are difficult to miss, but there is more than just four legs and nine lives that separate Cattails’ forests from Stardew’s farms. Cattails holds its own meowling voice in the mini-genre, and it adds some interesting ideas into the life-sim mix along the way. 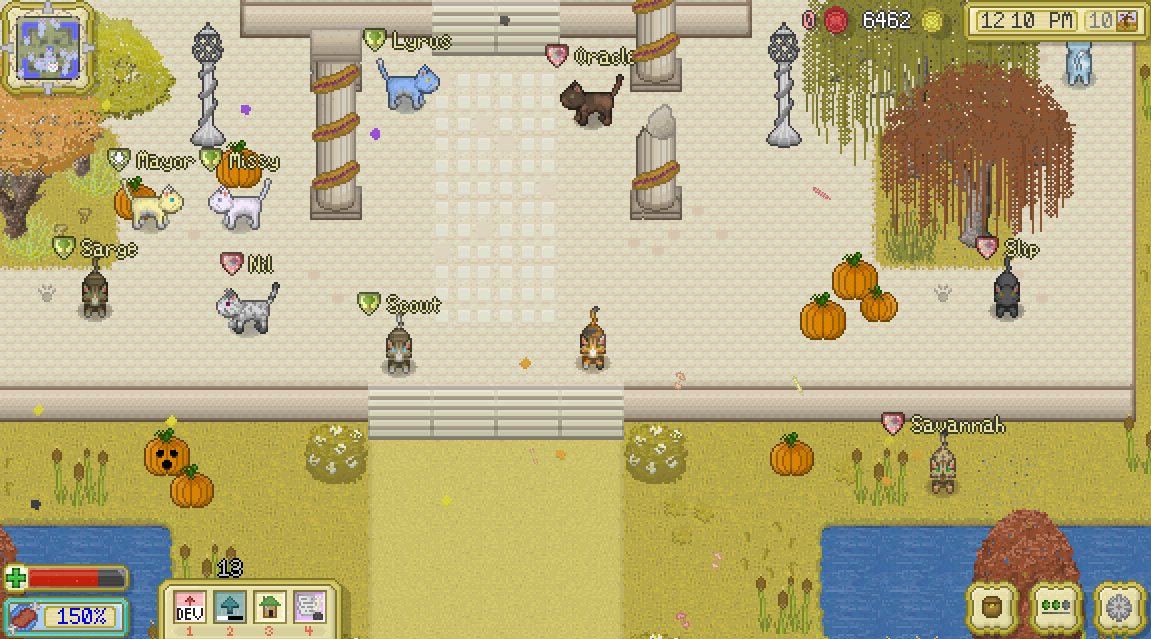 On the surface, Cattails simply looks much like Stardew Valley but in the best possible ways. The visuals hearken to a lost 16-bit era, featuring lovingly crafted pixel trees, swamps, and distinctive landmarks amid a beautiful, muted palette that makes your cat’s journey live, breathe, and purr. Beyond the striking look, the gameplay loop at its core has many of the same beats – wake up, gather resources, befriend villagers, maybe even make kitties with one, and collect certain items in order to advance the larger quest and save the day. All of which occurs along a little seasonal clock wherein the environment changes, each season punctuated by a small festival with games. There are even little mines to find and delve into.

These surface similarities between the two games are well-executed, but it should be noted that, for better or for worse, none have the same depth as you’ll find in Stardew. The mines are simpler, the cat relationships less deep (though some are very funny), the seasonal fests less-varied, the overall quest a bit less robust. That isn’t to say there isn’t a lot there, the developers have done a fantastic job with what’s included. Frankly, there are some gamers who would welcome fewer options than you find in Stardew, and all of the gameplay in Cattails is still fun and thoughtfully designed.

More Than A Mini-Kitty Stardew

Beyond the basic similarities to Stardew, Cattails opens up some new ideas for life sims and expands on some others. The most distinct and refined mechanic at play here is the one your feline life will rely upon- hunting. Hunting is the first skill you are taught, and initially, it is surprisingly tricky. As the game progresses, it gets easier, but out of the gate, stalking and pouncing proved challenging in a way that made every little field mouse and squirrels much more satisfying to murder. 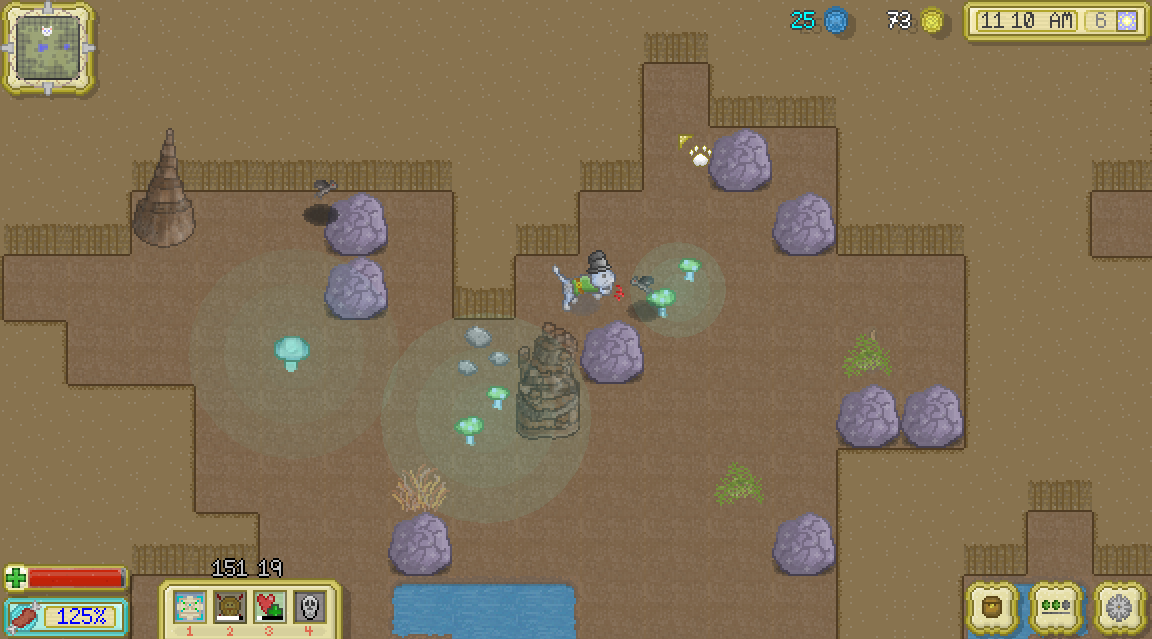 As you progress forward, there is an innovative mechanic that presents itself, that of passive and active abilities and their growth. You accumulate experience points for everything from picking berries to sleeping, and you can spend them on stats that increase your hunting, swimming, or fighting, or on abilities that give you stronger attacks or warps around the map (minor spoiler and pro-tip: nab the ability that lets you warp home early to give you a serious leg-up on exploration).

The last bit of spicy catnip in the mix is the ongoing war between factions of cats and your ferocious role in it. As you enter the game, you’re asked to join one of the three cat clans: forest, mountain, or mystic. Whichever two you don’t join, you are constantly scrapping with. The map is broken up into a grid, and each morning you will open up your map, find the two contested regions and scurry about to defend them. Your clan holds a percentage of influence over each tile, and victories hasten your full control over each one, changing to your clans color when you ‘own’ it. It becomes quickly apparent that your cat buddies need you to turn the tide, and most mornings will be spent dealing with border skirmishes. The fight mechanic itself is simple but effective, there isn’t much nuance to scratching away at your opponents. However, the boardgame-like dynamic of vying for border control is a very satisfying and novel game loop in this context, and it feels rewarding to watch your cat clan’s influence expand as you become that much more of a kitty cat badass. It would be wonderful to see a multiplayer version of this open up somehow. 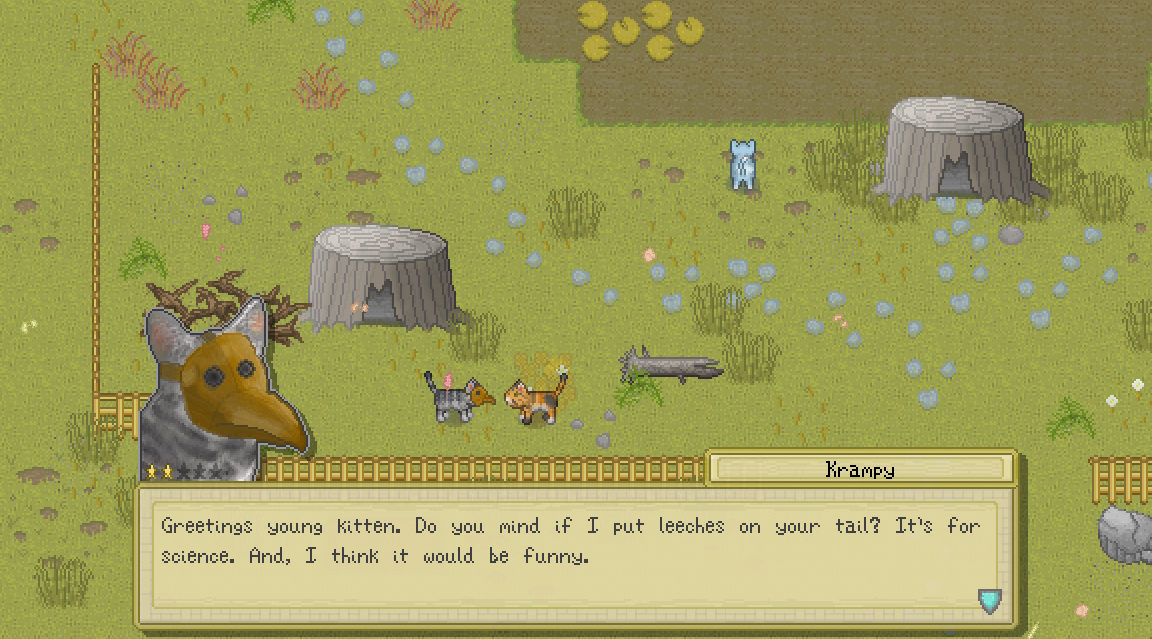 The rest of your time in the game is spent maintaining the aforementioned gameplay loops as you see fit. My cat, Skittles, initially struggled a little to survive, but once we had a handle on the systems, it all became quite manageable and rewarding. For some, the loop might become repetitive, for others, it’s that very repetition that might scratch their itch. Outside of the basics, there are some customizations available through little shops and prizes at festivals, and the developers are working towards an expansion that allows you to create your own cat colony.

Outside of the potential for loop-fatigue, the map is the most egregious issue that should simply get patched. It is unduly difficult to access the full map, and it’s pretty essential to reference it nearly all the time. Some kind of quick key for this would go a very long way to improve the gameplay experience, though by no means does it break an otherwise fun prowl in the woods.

It almost goes without saying that this experience, like so many little sims, feels right at home on the Switch. Each game day is short and satisfying, and the perfect nibble of gameplay for any handheld. 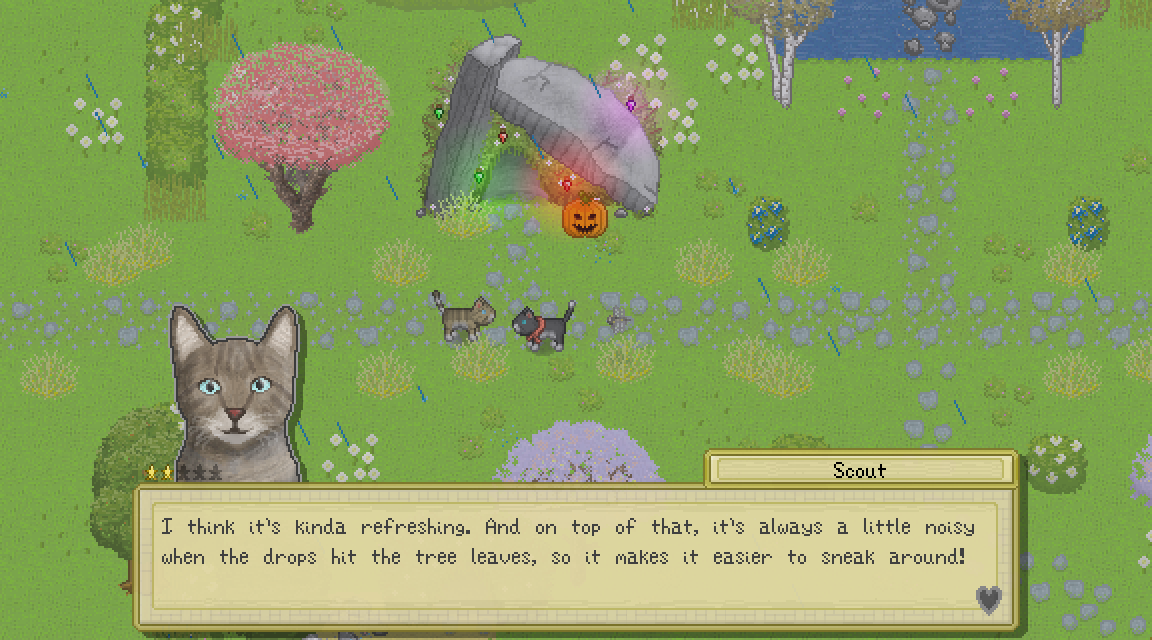 It’s worth highlighting again that this is a very small development team, and that they’ve crafted something wonderful and unique that deserves attention. While comparisons are inevitable, in most ways Cattails borrows upon its source material and then successfully marks its own territory. And if you do like Stardew Valley, you should most certainly give it a go.

If you’ve ever wanted to become a feral cat, or if you simply enjoy the type of life sim that sets up a satisfying gameplay loop in a well-realized world, Cattails is certainly worth a few of your nine lives.