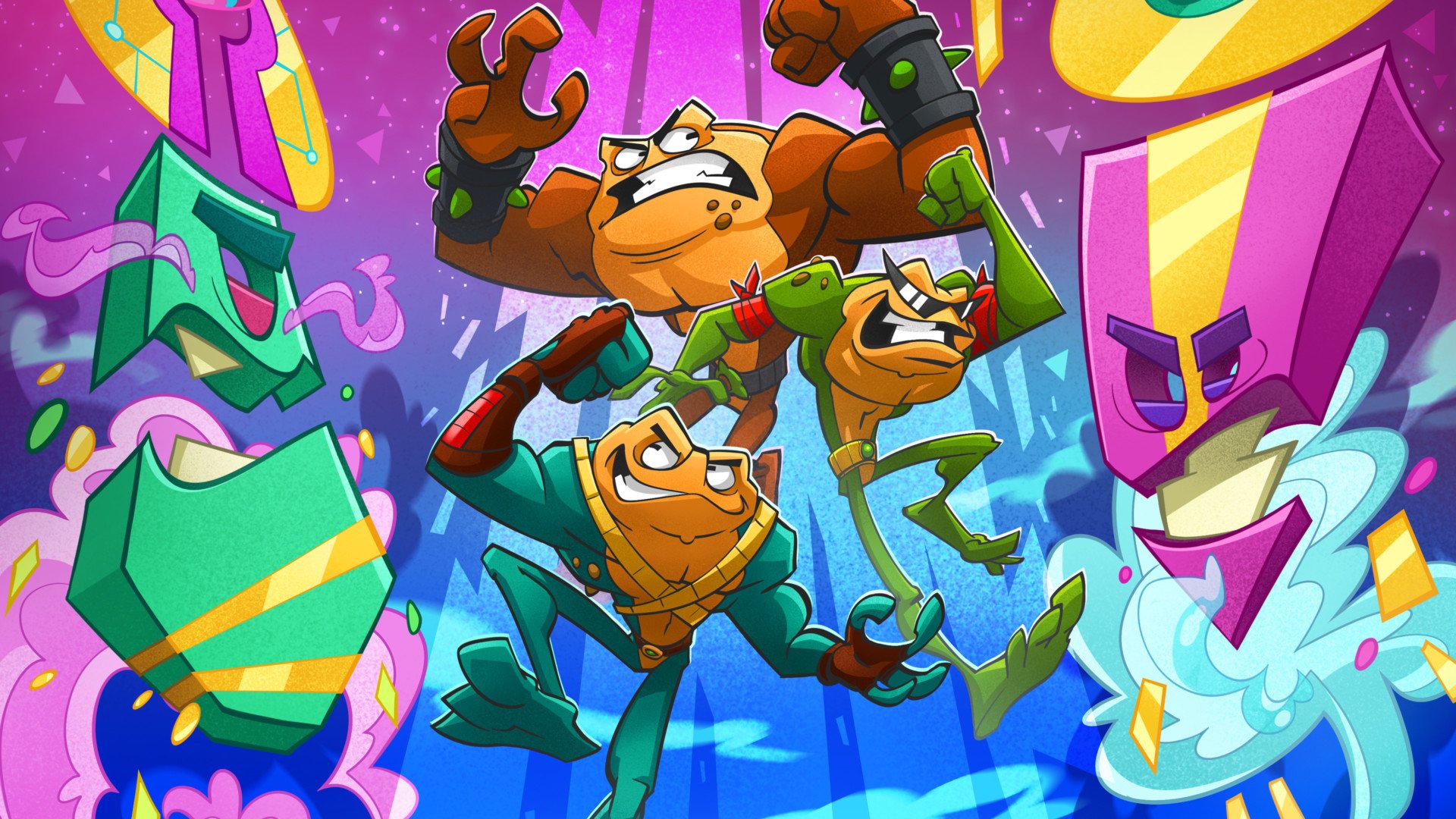 Over two decades of being missing in action outside of guest appearances and Rare cameos can take a heavy toll on a franchise, but the anthropomorphic muscular toads are back for more in their latest, mostly radical reboot. Some things are better off left in the 90s, but the Battletoads still manage to prove their value today in a hilariously animated arcade-style beat ’em up worth every interested veteran fan’s time. Perhaps it may not be the perfect way to hop back into the genre after all these years, but Dlala Studios have done a fine job reviving the franchise by clinging on tight to the series iconic stressful gameplay loop and slapstick animation. The main aspect it truly lacks is living up to the quality standards that other hand-drawn Xbox Studios games have recently held high. Nonetheless, if you are a fan of any of the previous Battletoads games, the latest addition in the franchise will satisfy your needs for more- as long as you bring along a buddy or two.

Without spoilers (unexpected right?), 26 years after being trapped in a delusional void of fantasies, Rash, Zitz, and Pimple are finally set free from their incredible make-believe world where they have become famous superheroes. Upon being dug up by construction workers and reentering reality, the team finds themselves stuck in a self-aware story attempting to reclaim fame as they venture to new worlds in search of a way to seek greatness again. Of all the aspects players would expect to find the most entertaining in a Battletoads game, the overarching narrative and individual characters are absolutely not what they would have in mind- but here we are. Believe it or not, the newest Battletoads entry actually contains a compelling story taking inspiration from several Saturday morning cartoons and it all pays off tremendously- more so than the new gameplay ever could.

Imagine if Rick and Morty featured toads and had a lower age rating, yet was still able to hang onto its sense of dark humor through innuendos and poking fun at serious topics. Battletoads ensures from the get-go that players are aware of the fact that the game is not just focused on intense action and constant combat. The three main toads along with the rest of the cast are blooming with personality and humor from the beginning of act one to the end of act four. Not all the jokes land- especially its very first one- but the majority of the humor is unbelievably fulfilling and continually gets better as the story progresses. Battletoads‘ script is just genuinely comedic and one of the absolute funniest games I have played. The story’s gameplay also delightfully directly lines up with the narrative so well at times that the first two acts can feel like full television episodes.

The gameplay of the Battletoads series has always hopped between two different styles: the standard arcade beat ’em up, point A to B levels that are the vast majority of the adventure, and some shorter but different bites of features slapped in between- think the infamous hoverbike levels or scaling down a mountainside. However, this time around, Dlala Studios has added several new levels that will align with the narrative- up until the end that is. Traditional hoverbike sections, shooters, a weird interpretation of rock, paper, scissors, and even different types of side-scrolling levels all consist of these breaks from the beat ’em up act levels. It always works during its first two acts, but the quality of these side distractions sadly takes an unexpected dip during the back half of the game- not directly in gameplay though, but rather, in variety. Rather than continuing to jump from idea to idea, the story starts to reuse aspects and ideas, making it more repetitive and less engaging than it once was. It is never a burden to play, but it is upsetting that the variety depletes as it draws closer to its ending.

The fun beat ’em up style gameplay of Battletoads can either be the game’s greatest strength or weakness, but that also depends on whether you are playing this game alone or with friends- we will get to that in a second though. Whereas previous entries had very few inputs to rely on, modern controllers have allowed the series to expand its button combination usage and individualize each toads moves, now making a gameplay scheme comparable to the Streets of Rage series. Zitz, Rash, and Pimple are more than just slightly different-looking character sprites you can swap between with the press of a button. Each toad has a special playstyle to utilize on the battlefield with separate animations, abilities, and attributes that are entertaining to swap between and try building the highest combos with.

The hand-drawn art style lends itself well into giving the main character animations more personality, but outside of the toads, it can sometimes become a problem for the game. One of Battletoad’s biggest letdowns can be the unexpected impact of the game’s hand-drawn art style on its gameplay. While the title’s cartoony look consistently remains appealing, in comparison to fellow Xbox Game Studios MDHR’s beautifully animated Cuphead, Battletoads can feel as if it is lacking a certain quality standard in its presentation. There is a missing level of smoothness you would expect to find in every animation which can leave some of the larger battles looking both accidentally choppy and too chaotic. The designs of the landscapes, toads, enemies, and bigger foes never fall flat artistically, yet sometimes it just feels incomplete. There are also many instances where speech bubbles are used instead of animations, which is fine except for the fact that large static character portraits come up often that lack any personality or pizazz.

The largest issue that the game truly faces, however, is its inability to decide whether it wants to be multiplayer or single-player. While some of the levels outside of the beat-em-up style may cater more so to a single-player experience, Battletoads‘ core gameplay was strictly designed to be a couch cooperative title which can indirectly be a problem for many players. From its UI to its generalized hectic level design that can be overpacked with enemies, this is not intended to be a solo adventure. As a single-player game, it can be a slog to get through due to an artificial difficulty created by an overwhelming amount of things to slaughter that should easily be dividable by three players. On top of this, the game notable has no online multiplayer- a problem for many people around the world currently. For Xbox, a company that constantly delivers on the multiplayer front with these types of games, it is simply shocking that Dlala Studios did not develop an online multiplayer for the title.

The newest Battletoads reimagining is a game that will undoubtedly please fans of the original Nintendo Entertainment System, Super Nintendo, and arcade versions of the series alike, despite its noticeable flaws. After being dormant for so long, Dlala Studios has done a fine job adapting Rare’s cult classic beat ’em up into the modern era, albeit perhaps not to its maximum potential. Hanging tightly onto its frustratingly long-running difficulty curve, catchy rock beats, and satisfying animations, Rash, Zitz, and Pimple are ready to once again hit the two-dimension plane and road for another out of this world adventure. Perhaps it may not be quite ready to fully embrace today’s standards due to a couple of hurdles, yet it still manages to retain a bizarre atmosphere and rewarding gameplay loop that will constantly keep players latched on like a leech to this crazy universe of princesses, aliens, and amphibians. It is quite honestly worth playing for the mere reason of just seeing its story unfold.