Solrock and Lunatone are a rather despondent pair, with pretty hapless statistics. They have a base total of 460 as of generation seven, putting them both on par with Mr. Mime and Basculin. A reason to strengthen them and bring them into competitive play was a welcoming thought, but sadly never came to fruition. The assumption of a mega evolution was an infectious hope that circulated the minds of every Pokémon trainer in anticipation of Pokémon Sun and Moon. But sadly, mega evolution has seemingly taken a step backward and the much-needed stat boosts to Solrock and Lunatone never happened.

This rejection remains a curious thought. With Solrock based on the Sun and Lunatone based on the Moon, it seemed a heightened status was imminent; mascots of their respected game. However, what seemed obvious didn’t eventuate. Like a solar eclipse before sunrise, the impossible became a reality and the demise of the speculative theories was hastened.

The introduction of Cosmog to the franchise only provides more questions than answers. Whilst Cosmog is said to come from the same dimension as the Ultra Beasts, what is also apparent is its galactic origins. It is known as the Nebula Pokémon, and its Pokédex entry in Pokémon Moon even states that its a child of the stars. It is at the center of the story for Pokémon Sun and Moon, using Ultra Wormholes to escape dangerous situations. 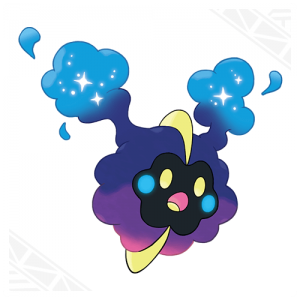 What makes Cosmog a fascinating Legendary Pokémon is it’s able to evolve. Not only is it the only Legendary Pokémon line with evolution, (Manaphy is technically a Mythical Pokémon, and its ability to breed with a Ditto to obtain Phione isn’t evolution) but the story behind its evolution is intriguing. Cosmog is tied with Gastly and Flabébé for the lightest Pokémon, but when it evolves into Cosmoem, it soon becomes the heaviest Pokémon known in existence.

Cosmoem is known as the Protostar Pokémon. Cosmoem is also the smallest Pokémon known in existence, suggesting it has an incredibly high density. Cosmog, therefore, evolves in the same process as stars are formed. Cosmog is essentially a molecular cloud who’s atoms bind together on evolution to begin the process of star formation. This means that Solgaleo and Lunala are both stars. 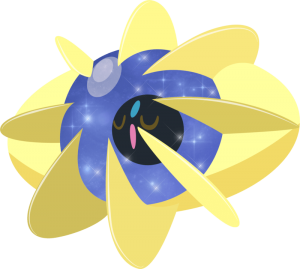 It becomes more complex when you begin to read the Pokédex entries for both Solgaleo and Lunala. In Pokémon Moon, it suggests Solgaleo is a male evolution of Cosmog. In Pokémon Sun, it suggests Lunala is a female evolution of Cosmog. However, they’re both for the moment considered genderless, but that doesn’t strictly need to be true in the future. The possibility of breeding Solgaleo and Lunala to create more Cosmog is not so farfetched as it would first appear, after all, we can breed Manaphy to obtain Phione.

The question now is where do Solrock and Lunatone acquiesce with the Cosmog Lineage? Maybe, just maybe, it’s part of an ever more complex Cosmog family tree. Both Solrock and Lunatone are considered the Meteorite Pokémon, suggesting a collision. There’s one more Pokémon that provides a new branch to the tree, Minior.

Minior is known as the Meteor Pokémon. The difference between meteors and meteorites is simply meteorites make an impact with the surface. The Pokédex entry for Lunatone in Pokémon Ruby says Lunatone was first discovered at a location where a meteorite fell. It’s not inconceivable for a meteor to become a meteorite, and therefore it’s not inconceivable for Minior to evolve into Solrock or Lunatone. Much like Solgaleo and Lunala, this evolution could be gender influenced. 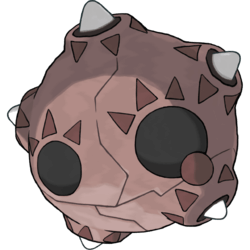 It could just be that smaller Cosmog that lack the density to kickstart thermonuclear fusion never become stars. They just continue their particle eating existence in the atmosphere as their new form of a Minior. A Minior that falls from the atmosphere would evolve into Solrock or Lunatone dependent on gender.  The reason for the absence of Solrock and Lunatone in Pokémon Sun and Moon is merely a lack of collisions from the Minior. Looking at a map of Alola, there appears to be a lack of crater impacts.

Radical changes have happened before, notably the recent updates to Zygarde (with its different forms dependent on how many Zygarde cells you collect). A future update to Solrock and Lunatone isn’t out of the question, but it remains unlikely at this moment in time. The problem remains that mega evolution isn’t the focus of Pokémon Sun and Moon, and a Z-move wouldn’t do much to make Solrock and Lunatone competitive. 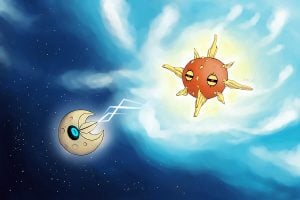 Ultimately, the boosts to Solrock and Lunatone are unlikely to happen. Much more likely is their exclusion was a purposeful decision, and they were never meant to be a crucial part of the Pokémon Sun and Moon games. Their galactic origins, their names, and their designs are just a coincidence.  Maybe in the future, Solrock and Lunatone will be shown to have appeared from the same dimension as Cosmog; but for now, we should expect nothing more than the sound of a broom sweeping space rocks under the carpet.