Everyone is trying the shared universe thing these days, but Marvel and Capcom were mashing up their most beloved characters decades ago. Perhaps their best crossover effort was Marvel vs. Capcom 2: New Age of Heroes, which was released on the PlayStation 2 on Nov. 19, 2002, in North America. Previous releases took place in arcades and on Sega’s beloved but ill-fated Dreamcast console. The rosters for both sides fluctuated between a who’s who and a who’s that? Some obvious Marvel inclusions were Doctor Doom, Iron Man, and Wolverine, with separate skins for his adamantium and bone claws due to a storyline in which Magneto (also in the game) removed the bruiser’s metal skeleton. Lesser known characters included Omega Red, Shuma Gorath and Marrow, an X-Men team member with bones that grew on the outside of her body. Seriously, comics in the 90s had a bizarre fascination with characters having bones protruding from their skin.

Capcom went deep into its bench as well. Of course, there were notable Street Fighter characters such as Akuma, Chun-Li, Ken, and Ryu. But Capcom wouldn’t miss a chance to promote the successful Resident Evil series, bringing a 2D Jill Valentine into the mix. Mega Man, Captain Commando and Strider added a classic feel. Capcom even came up with three brand new characters: Humanoid cactus Amingo, Ruby Heart, a French-speaking pirate and SonSon, a monkey girl who is the granddaughter of the hero from 1984’s SonSon arcade game. Yes, she is basically a chance to give the Darkstalkers sexy girl character design to another hero. The mammoth roster added up to 56 characters, yielding a seemingly infinite amount of tag-team combos.

MvC2 featured a number of changes from its predecessor. It blended 2D character sprites with 3-D rendered backgrounds for a 2.5D perspective, the first in this series. The fighter teams went from two-on-two to three-on-three, and the variable assist system used in 1997’s Marvel Super Heroes vs. Street Fighter made its return. The teams fight one-on-one with the ability to tag out or call in other fighters for a single special move from one of three different assist types. This also marked the debut of the snapback mechanic, which can knock a fighter offstage and replace them with another, preferably less healthy one. Characters not currently in the fight slowly regain lost health.

All of that sounds complicated and certainly can be, but Capcom made an important concession to make the title more accessible. Instead of six attack buttons in the traditional low, medium, and fierce designations, there were four attack buttons and four assist buttons. This upset some purists, but Capcom felt MvC2 could be a jumping-on point for many more casual players. The gambit worked, as this classic consistently tops lists of the best fighting games of all time.

Even masterpieces have flaws, and for Marvel vs Capcom 2 it was the now infamous wacky dance jazz soundtrack. The song declaring it was “gonna take you for a ride” became synonymous with music that didn’t fit the explosive superhero action happening on screen.

This fighter’s legacy would loom even larger due to the Marvel licensing rights Capcom had to negotiate before releasing any new versions. Despite the success of all the VS titles, Marvel went a different path with their licenses. After 10 years of offerings such as Marvel Nemesis: Rise of the Imperfects failed, the partners joined again for 2011’s Marvel vs Capcom 3: Fate of New Worlds. 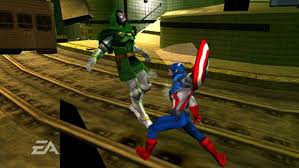 Fans still want to play the innovative second installment, however. A 2009 port by Backbone Entertainment brought a much-anticipated update to the PlayStation 3 and Xbox 360 but in 2013, expired license rights led to the game getting pulled from both console stores. People who had already purchased it could still play it, but everyone else was out of luck. With digital purchases now a no-go, physical copies can fetch as much as $300 online.

Disney’s purchase of Marvel Comics has made things even more difficult. The underwhelming Marvel vs. Capcom Infinite didn’t resonate in large part because it focused on characters Disney has the film rights to. Fan favorites such as Doctor Doom were left out, replaced by characters like Gamora, designed to match her Marvel Cinematic Universe appearance. None of the X-Men were playable characters for the first time in years. The title was more Disney Corporate Synergy vs. Capcom and longtime players largely rejected it.

YouTuber and fighting game aficionado Maxmilian Dood has started a “Free MvC2” campaign that can now officially be called a cause celebre. No less of a luminary than former Human Torch and current Killmonger Michael B. Jordan has asked Disney to Free MvC2.

Former employees of Backbone Entertainment have formed a new company called Digital Eclipse. On Twitter studio head Mike Mika confirmed they would love to help the fans. In addition to having ported MvC 2 before, the studio has worked with Disney on re-releases of the Disney Afternoon Collection, Aladdin and The Lion King. Legions of fans are waiting for Marvel vs. Capcom 2 to take them for one more ride.