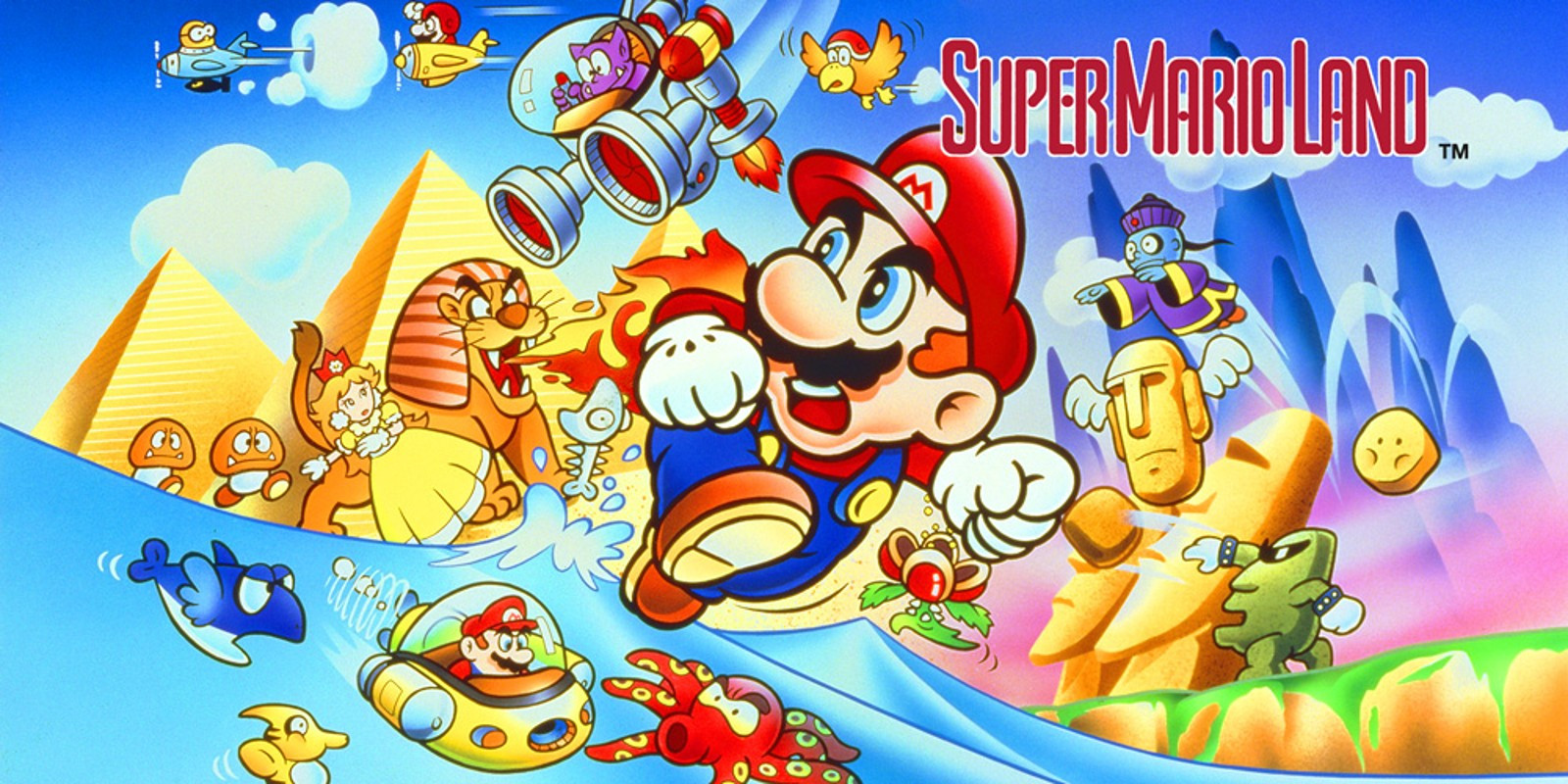 By 1989, Nintendo had very carefully crafted an image for themselves within the retail stratosphere. The Nintendo Entertainment System wasn’t a toy — it was a video game console. It wasn’t a fad gift, but an accessory that could become a legitimate part of the household; an NES could be as intimate as a TV. And so, it was only a matter of time before Nintendo set their sights for the handheld market. Gaming may still have been in its technological youth, but Nintendo knew to strike while the iron was hot. The Game Boy, an under-powered piece of hardware that could never compare to the NES, would ensure Nintendomination continued for years to come. But it wouldn’t do it alone; the Game Boy needed legitimizing. It needed Mario.

Although Gunpei Yokoi envisioned the Game Boy as a successor to the Game & Watch, Nintendo didn’t want to treat the handheld system like a toy. The Game Boy needed to have a proper catalogue à la the NES — complete, cohesive video games that went beyond the Game & Watch’s often trivial gameplay scenarios. Super Mario Bros. had established itself as a powerhouse brand internationally by 1989; Japan had three full Mario games on the Famicom, and westerners had two distinct, well-designed platformers to chew on. Nintendo simply needed to develop a Super Mario Bros. title for the Game Boy.

Logic would seemingly dictate that the Game Boy’s launch title would resemble the original Super Mario Bros. as much as possible; after all, Nintendo wanted the Game Boy to sell the idea that handheld gaming wasn’t any less valid an expression of the medium. A recognizable Super Mario game would realistically move units and maintain the company’s reputation. With series creator Shigeru Miyamoto actively preparing Super Mario World for the Super Famicom’s launch, it would naturally be the safest decision as well. However, this was a time in the company’s history where Nintendo seldom played it safe.

Super Mario Land would end up being more than just recognizable — it would be its own beast entirely. Mario would be the only familiar icon taken from the series, as Peach, Luigi, Bowser, Toads, and the Mushroom Kingdom wouldn’t so much as warrant a reference. Even enemies were slightly altered so that Super Mario Land wouldn’t fall into the same gameplay loop as Super Mario Bros. Something as simple as shells blowing up instead of moving across the screen manages to affect the pace at which Super Mario Land is played.

Visually, Super Mario Land couldn’t exactly mimic the franchise aesthetic. Where NES games were entirely in color, Game Boy games were relegated to black and white, so even if Nintendo wanted it to, Super Mario Land wouldn’t be able to accurately emulate even the first Super Mario Bros. Instead, Land plays to its strengths. Keeping with its unique identity, the game’s levels take influence from real world cultures. World 1 is based Egypt, World 2 is based on the lost continent of Mu, World 3 is based on Easter Island, and World 4 is based on Ancient.

Perhaps more importantly, all four worlds place emphasis on mythology and the supernatural. Multiple Sphinx appear near the end of World 1, channeling their depiction in Oedipus Rex; World 2 has Mario entering the stage via a UFO; Moai statues attack Mario in World 3; and World 4 features Jiangshi — Chinese vampires — as enemies, while also ending with Mario fighting against an alien. Super Mario Land grounds itself in some semblance of reality, then twists it further than the other Super Mario Bros. games ever did. Super Mario Land knows it’s a weird game, and seems to revel in it.

By 2-3, it’s made quite clear that Super Mario Land is not trying to emulate the original Super Mario Bros. formula. As Mario pilots a submarine in a shoot-’em-up stage, Super Mario Land drops all pretense. The Game Boy wasn’t the mini-NES; it was the Game Boy, and it had its own distinct style, Mario included. That said, while the shoot-’em-up elements certainly helped solidify Super Mario Land’s style, it was also the biggest risk Nintendo took with the game. Redefining Mario’s image is one thing, but his gameplay?

The shoot-’em-up stages more or less serve as Land’s water stage equivalent, albeit with a key distinction. Where water stages were meant to be pace breakers, the shoot-’em-up sections are just as involved as traditional platforming stages. Since both also double as boss stages, the difficulty curve can’t afford to dip downwards to make up for the new gimmick. On paper, this is a disaster waiting to happen; in execution, 2-3 and 4-3 stand out as some of the best levels in the game.

Land may try to stray the course when it comes to presentation, but the level design is right on par in terms of quality with the previous Super Mario Bros. games, if not better than both renditions of Super Mario Bros. 2. The developers clearly didn’t see the shorter play time as a weakness. Super Mario Land is only home to 12 levels, but they’re all tightly designed around Mario’s new control scheme. In the shift to the Game Boy, Mario’s mobility had been limited.

No longer could he jump as fluidly; he comes to hard stops, and has an almost sharp slide to his traction when landing. However, though controlling Mario was going to be fundamentally different between consoles, it didn’t need to be a problem. Rather than simply accepting Mario’s stiffer movement and hoping for the best, Nintendo R&D1 understood the need to alter the series’ level design conventions towards Super Mario Land’s gameplay strengths. Platforms in Land are closer together than they’ve ever been, but they’re structured as such out of necessity.

More importantly, the closer platforms allow stages to move at a brisker, more dynamic pace. Even with the Game Boy’s small screen, the tight platforms keep everything important visible on screen at all times. Mario is constantly running and jumping, often needing to hop ever so slightly to navigate stages properly and quickly. Multiple stages also make use of in-level branching paths — a relative rarity for the series at the time. This not only keeps the replay value high, but gives stages an added level of depth that some fans might not have expected from a handheld title at the time.

Of course, being an early Game Boy game, Super Mario Land is victim to the limitations of early Game Boy development, particularly when it comes to length. Even with its new game plus hard mode, Super Mario Land is a very short game, and needlessly so at that; it would have benefited from one or two more worlds. By the time the game is over, it feels as though the experience has just begun.

Which in a way it has. Super Mario Land’s length is going to be a disappointment the first time around, but it’s a game that demands replayability and mastery. Levels aren’t particularly long, and the shoot-’em-up stages actually do help the game from becoming repetitive. It’s an easy game to pick up, play a few stages, and then put down. All the while, players are familiarizing themselves with the game, gradually getting better. It’s very arcade-like in a sense, and that’s ultimately what the Game Boy was going for with its launch titles.

Game Boy games weren’t meant to be played just once and then be put down. The Game Boy was a system that players should want to come back to. Super Mario Land’s short length ensures that players will want to come back, if only to get a little bit of Mario in. Super Mario Land would be immediately outclassed by its direct sequel, but it’s still a Mario game worth playing today, and an important piece of the series’ legacy. It was the first Mario title developed without Shigeru Miyamoto’s involvement, and took the series in an incredibly unique direction. Where Nintendo could have played it safe with the Game Boy’s launch, Super Mario Land stands out as a testament to the benefits of taking an established property in an unconventional directional.

It’s also important in and of itself that Super Mario Land wasn’t developed by the series’ creator. This was the first chance for the Mario formula to be looked at with truly fresh eyes. Nintendo R&D1 could have attempted for an exact recreation, and given how successfully they pulled off Super Mario Land, it might just have worked, but it would have resulted in a blander game. The Game Boy didn’t need an NES Mario — it needed a Game Boy Mario. It’s not ideal that Super Mario Land is so stiff and short, but it’s not a weakness of the game either.

Not only would Super Mario Land 2 improve upon its predecessor, but it would better conform itself to the series’ mechanical norms. While this was absolutely the right direction to go in, it doesn’t invalidate Super Mario Land or make it lesser. Super Mario Land had more at stake — it was a game built on new, limited hardware — but it was just the launch title the Game Boy needed on April 21, 1989.