Pokémon has been veering off into different directions as of late. X and Y brought Mega Evolution, while Sun and Moon turned its back on gyms and introduced the Z-Move. While new mechanics can be exciting, nostalgia can be an equally persuasive force that captivates the imagination of an older generation. Pokémon Let’s Go Pikachu & Eevee aren’t shy about the influence Pokémon Yellow had on their development, and by combining the 90s classic with Pokémon Go, they’ve produced one of the more enjoyable adventures on the Nintendo Switch this year.

For those old enough to have played Pokémon Yellow, the story has changed very little, if it at all. Jessie and James from the anime are once again introduced as a comic relief for the otherwise serious Team Rocket. Even though the storyline has barely changed, it’s a reticent reminder of how clever and thought-provoking generation one was, especially enjoying the journey again over twenty years later. The Cubone interlude was particularly tragic at the time, and while Pokémon Origins did a fabulous job of bringing the scene to anime, the gameplay combined with the creepy Lavender Town soundtrack has always enhanced the situation.

Pokémon Let’s Go Pikachu & Eevee are exactly the games Nintendo needed to pitch to the fans before the Switch was launched.

By borrowing mechanics from Pokémon Go, the gameplay has become much more lively and interactive. Rather than rummaging through the tall grass and wasting hours trying to find a rare pokémon, they now freely move in and around the tall grass, allowing the player to choose or avoid the interaction. This is a mechanic that should be brought over to generation eight as the advantages far outweigh the disadvantages; avoiding Zubat and their supersonic disposition is particularly rewarding, but finding a rare pokémon stumbling through the tall grass is even more magnificent. 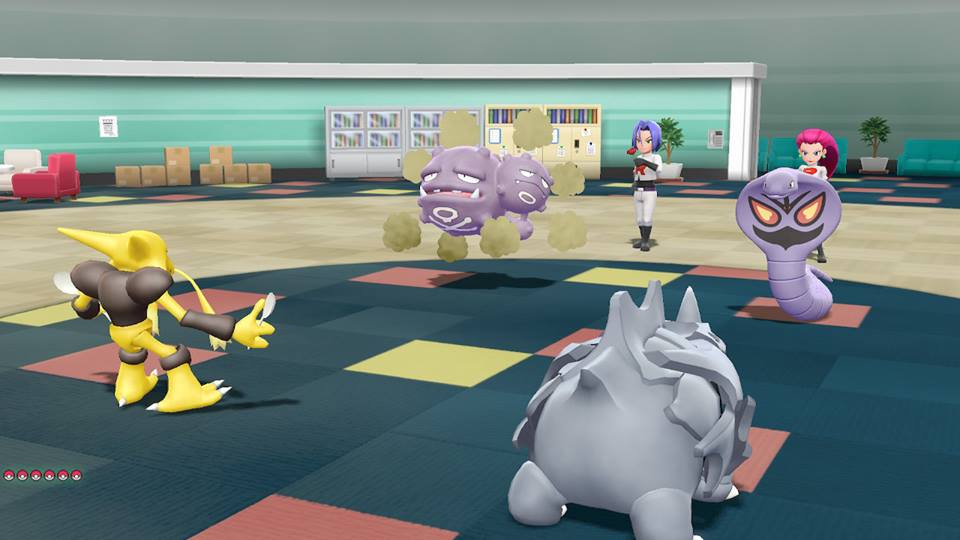 Perhaps the biggest change, and probably the most divisive, is to the catching mechanic. Previously, the player would have battled a pokémon until reasonably weak before attempting to throw a pokéball. In Pokémon Let’s Go Pikachu & Eevee, catching a pokémon is very similar to Pokémon Go, relying on timing and technique to maximize the player’s chances. Much of the gameplay is centered around this mechanic and the game actively encourages the player to catch as many pokémon as possible.

Catching pokémon earns EXP for the pokémon currently in the party. The amount of EXP depends on the pokémon caught, the strength of the technique, the size of the pokémon, and how many of the same species the player has caught in a row. This is where the joy-con really excels. While the joy-con has numerous problems, Pokémon Let’s Go Pikachu & Eevee are exactly the games Nintendo needed to pitch to the fans before the Switch was launched. The technique the player uses with the motion controls helps them to catch pokémon easier, all while at the same time earn more EXP. It’s still irritating that the games are incompatible with the pro controller, however, as eventually the joy-cons can become tiresome.

The catching mechanic is further enhanced by the individualistic movements of the pokémon. It becomes a mini-game within a game, playing like a motion-controlled arcade experience. Each species has a unique movement that the player has to learn to time the throw of the pokéball perfectly, while at the same time attempting to hit the sweet spot to increase the chances of a capture. While still reliant on the luck of mathematics, there’s an element of skill involved to help the player defy the odds.

There is a slight hint that this mechanic could be brought over to the main games. Some pokémon, notably Snorlax, require a pokémon battle before the new catching mechanic can be utilized. This is another influence from the anime, where the pokémon often fainted before they were caught. If this was to become the new technique for catching pokémon, moves such as False Swipe would certainly suffer an existential crisis, but that’s a sacrifice a Voltorb is willing to risk. Catching pokémon would become more interactive and, therefore, more enjoyable. Indeed, Pokémon Let’s Go itself could have used more of these situations rather than blindly throwing pokéballs until one sticks. 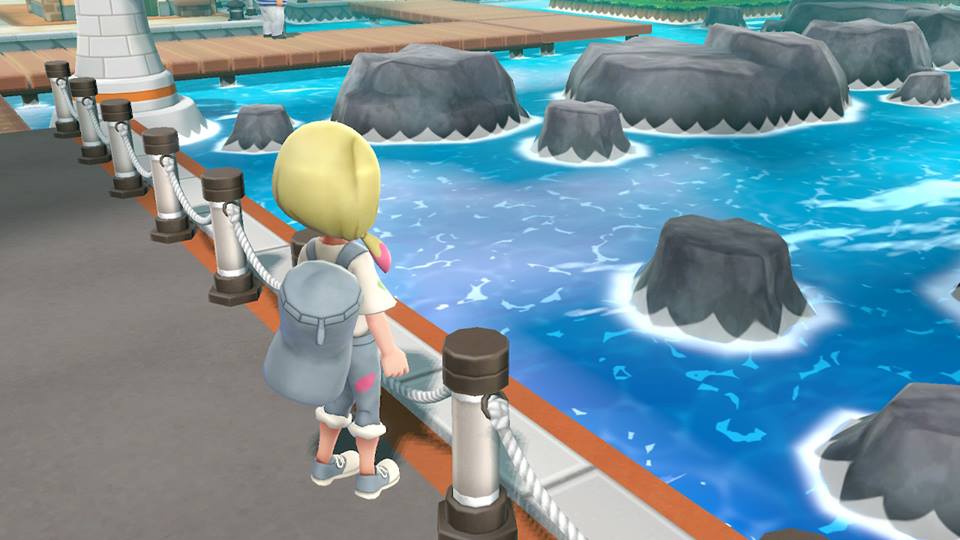 Familiar faces from various generations can be found

To further incentivize the player to catch pokémon, battling against the various NPCs and Gym Leaders earns less EXP than previous games. Creating catching combos will certainly hasten the leveling up process far more than battling, and by catching the same pokémon continuously, the player will be more likely to find stronger pokémon, including shinies. This is nothing new, just an adaptation from previous games, but it certainly is utilized wonderfully with the Pokémon Go mechanics.

This can have an adverse effect on the player’s box, and unfortunately, the pokémon box system is a complete mess in Pokémon Let’s Go Pikachu & Eevee. While it can be sorted in various ways, the fact that the player’s main party is mixed into the arrangement creates a cumbersome, and even more tiresome, process of finding the desired pokémon. Ideally, the player wouldn’t have to sort through the box at every moment.

The best way to combat the disorganization is to cut the numbers down. Once upon a time, that would have meant releasing pokémon back into the wild. In Pokémon Let’s Go, rather than give the pokémon freedom, they can suffer a far worse fate and be sent to Professor Oak in exchange for some candies. The candy is incredibly useful and another attempt to persuade trainers to catch as many pokémon as possible. These candies come in many varieties and can be used to boost the stats of the player’s pokémon. This ensures that catching pokémon indirectly strengthens the player’s pokémon, creating a cycle that leads to the Indigo Plateau itself.

Battling hasn’t changed, and with the gameplay ensuring it’s slightly slower to level up pokémon than in previous games, some of the battles can have challenging moments; the NPCs even carry more than one pokémon, unlike in Sun and Moon. And while a difficult tactical affair will ensue against the same crazy Fisherman with six Magikarps, a more cautious approach will be seen at Fuschia City gym where every trainer and his Growlithe has trained their pokémon to know the move Protect; a limit to generation one pokémon hasn’t diminished the diversity of tactics employed. 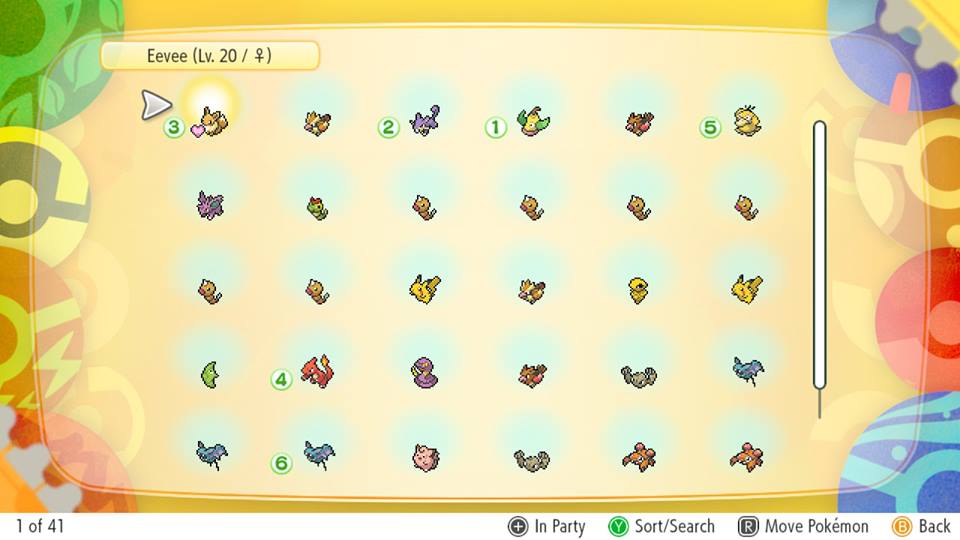 The box system is a bit of a mess

The Pikachu or Eevee that the player obtains at the beginning of the game can learn some unique moves from various NPCs dotted around the map. These moves are often particularly strong and have cutesy names such as Bouncy Bubble or Sizzly Slide. They’re definitely worth seeking out as they ensure the player’s starting pokémon is worth battling with.

Perhaps controversially, the limit to generation one pokémon has strengthened Pokémon Let’s Go Pikachu & Eevee instead of weakening them. Rather than muddling an odd variety of different pokémon together, the nostalgic choice of only generation one pokémon has set the perfect atmosphere for two games reliant on a Marty McFly maneuver through time. There’s an odd satisfaction when encountering a Pidgey or Rattata on every route, blindly hoping something else will pop out of the tall grass; something as Farfetch’d or without a Chansey of being obtained certainly creates a Taurus of stampedes towards the lambent arrival.

The only issue regarding obtaining rare pokémon is the plight of the once renowned Safari Zone. Before, it was the place to catch a Scyther or a Kangaskhan (or better yet, the elusive Dratini), but now it’s nothing more than a place to connect Pokémon Let’s Go Pikachu & Eevee to Pokémon Go. It’s a huge waste of an opportunity, in which the Safari Zone could have been an amazing area to catch rare pokémon with the new mechanics. Pokémon Go is the fad that fainted, and the continuous CPR to get it breathing again is unlikely to be successful. While being able to trade between Pokémon Go ad Pokémon Let’s Go is positive, it didn’t need to replace the Safari Zone.

Indeed, trading pokémon in general, is a mess, something that didn’t need changing from previous games. The best approach to trade with friends will be to meet up and trade locally as the online system is dysfunctional. Rather than continuing the GTS system, Pokémon Let’s Go asks the player to type in a code, and the friend has to match the code. This highlights two problems: firstly, trading with anybody across the world is now much more difficult, and secondly, trading with a friend is much more difficult as occasionally the player will end up trading with someone completely different to who they intended. 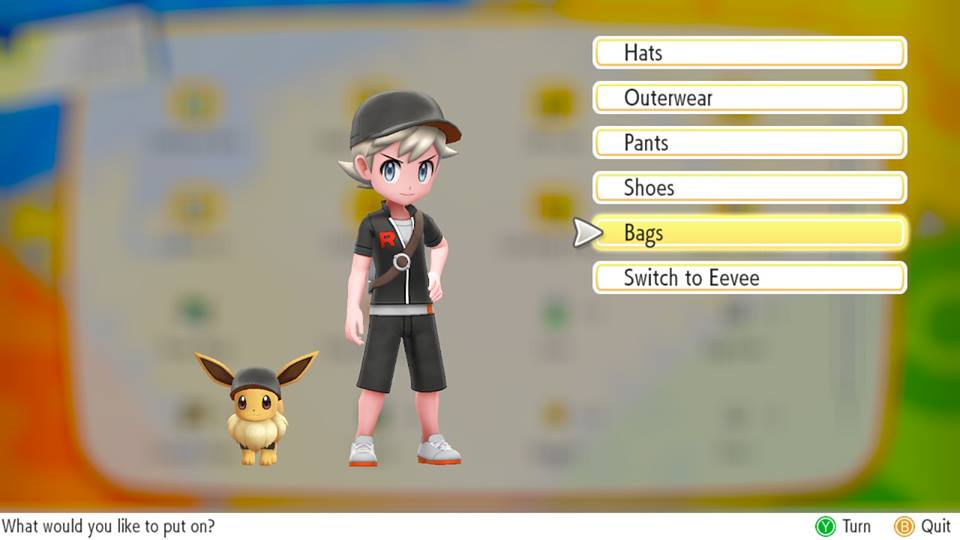 There are different outfits to collect

With trading a vital aspect of the Pokémon series, it’s a shame to see the franchise take a step backward, when previously they had leaped forward from game to game. While the dynamics of generation one pokémon ensure it is easy to complete the Pokédex, in the event of a Johto version of the games, the trading system will need to revert back to the previous system.

The new catching mechanics have brought an important aspect of the Pokémon series to life.

Visually, Pokémon Let’s Go Pikachu & Eevee has done an incredible job of updating Pokémon Yellow with a fresh palette that actually manages to install nostalgia while still looking distinct. From color alone, the cities match their origins. Fuschia City has the purplish red that its namesake suggests, while Lavender Town still looks as eerie as ever – the soundtrack helps. The vibrant colors bring Kanto to life, and the battles particularly have never looked better. One concern is there occasionally is some lag, particularly during battles or catching pokémon. This has yet to be a detrimental issue, but the lag can last a couple of seconds (enough to suspect a potential crash, although unlikely).

Riding on the back of a Gyarados

In addition, the player can choose to have a pokémon walk around with them outside their pokéball, and just like with Pikachu in Pokémon Yellow, the player can interact in meaningful ways. Each pokémon seems to have a personality outside of their pokéball, notably Bellsprout, which seems to run around awkwardly. Some pokémon can be ridden upon, which helps the player move around the map much quicker, although some like Haunter seem to just be for aesthetics only.

Trading and the online services aside, Pokémon Let’s Go Pikachu & Eevee is a fantastic return to Kanto. The new catching mechanics have brought an important aspect of the Pokémon series to life, and by keeping the game generation one specific, it’ll help to ease the more stubborn fans into a change that could be beneficial to future games. While apprehension is understandable, the changes are enjoyable, and the nostalgia Kanto induces ensures the games are one of the best adventures on the Nintendo Switch this year.