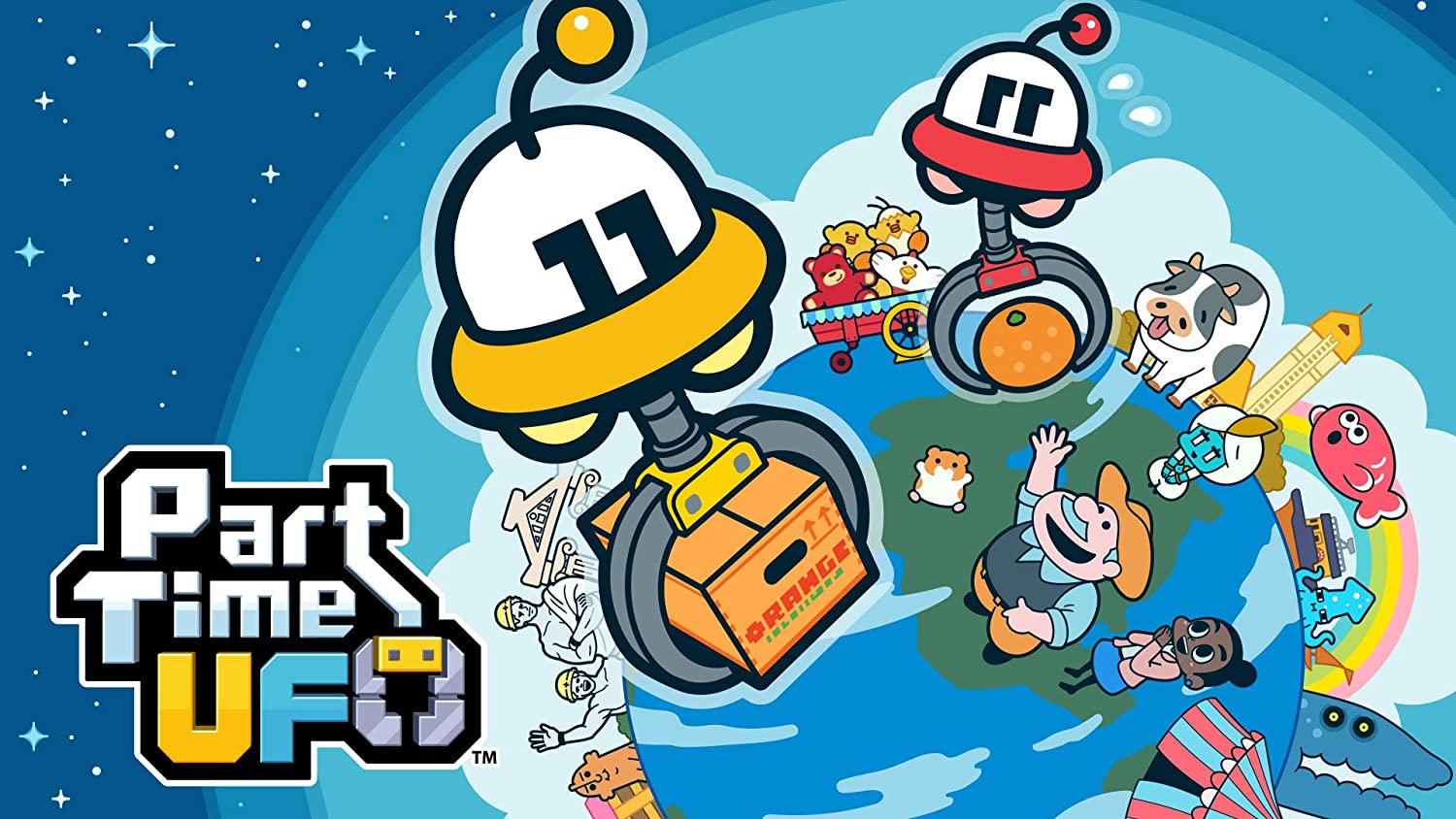 While HAL Laboratory has sacrificed all of their upper management on further developing the super-tough pink puff’s mega-franchise, every now and then the company manages to band together and put out a bite-sized, seemingly independent-looking project. In the last half-decade, Qbby’s journeys in the handheld BoxBoy! series has taken the spotlight outside of Kirby’s adventures. Now, however, one adorable extraterrestrial creature from the company’s mobile arm, HALEgg, is back looking for more job opportunities. After practically three years of fans clamoring for Part Time UFO to make its way onto a Nintendo Platform, the little flying saucer is back in business for an enhanced albeit familiar outing.

Part Time UFO is a deceptively simple puzzle game that excels in the same vein as HAL Laboratory’s BoxBoy! franchise on 3DS and Switch. It sticks to exploring a simple job concept with constant succession as it continually only mixes up the atmosphere and puzzle intricacy time and time again. As if the title were not explanatory enough, Part Time UFO focuses on the titular character seeking work upon his crash landing on planet Earth. The UFO has the ability to unleash a crane that can pick up practically any object no matter its size or weight. After saving a distressed farmer who provides your UFO with a magazine of employment listings, you will set off to give more earthlings a helping hand.

As your UFO, you press A to open your crane carefully and slowly or B to give it a fast drop. Your central goal is to pick up objects to either store them in one specific area or stack them to match a requested esthetic. There are never any additional gimmicks or game-changing aspects that will surprise you on your way to complete each part-time job, but that’s for the better. The only changes that will ever be impacting the gameplay loop are the shifting atmospheres that provide hundreds of objects of different proportions to play with. As you tackle each job you will learn how to master your claw. Knowing how to tackle the few ridiculously-shaped objects in each level through a methodical order of moves keeps Part Time UFO fresh as you never quite know what you may have to carry out next.

Unlike Kirby and Qbby’s unlimited amount of given time to complete their tasks, your UFO buddy is on a strict limit of one hundred seconds. There is no massive dramatic zoom out where you will see every object in the area or detailed explanations as to how you can earn each level’s three dedicated medals. The job has to get done, and the game heaps that pressure on you as you have to strategically analyze all of your surroundings as you peruse each compact environment. Creating a plan in the moment is key. Perhaps your decisions in Part Time UFO are not as destructive as other puzzle games such as Tetris or Puyo Puyo, but the fact still stands that you can not always just start picking up objects and attempt to complete the task at hand by meandering through everything available.

The reward for your daily efforts aside from that satisfying feeling of completing a level is cash that can be traded in for different costumes. It may feel like a bit of a cop-out, but Part Time UFO’s only available unlockables from collecting its abundance of coins are worthwhile as the numerous outfits you can dress your UFO in each has benefits. These rewards are the game’s main system of optional powerups and abilities. Each costume can provide different enhancements such as a speed boost or slow-down for swaying; however, for anyone wanting to create their own difficulty curve, these are once again just optional and are completely unnecessary to complete the game.

Mobile players who first set out to work in 2017 may be wondering what is new and what has been changed on this second crash landing. The new content Part Time UFO hovers over may seem insignificant at first glance when it initially shows off simple extra additions such as an obvious updated control scheme for the standard-issue button layout and new unlockable artwork for taking a screenshot or posting victories on social media, but there is a lot to unpack and restack with this release. The price may have doubled for the title, but it has done so for all the right reasons. Not only is there now a cooperative two-player mode, but HAL Laboratory has taken their time to add more single-player content.

The biggest highlight to talk about outside of the new single-player and cooperative levels optimized for that multiplayer push is the addition of an infinite play mode that is well-suited for solo and duo action. Tower of Infinity will test every UFO’s skills as players have to embrace a constant stream of objects to stack from all over the course of the main game. It’s an exhilarating challenge that can destroy minutes of precise decision-making in a matter of one fell swoop. The only thing missing from this mode is an online leaderboard to compare your highest height to other players–something that also would have been nice in general to have during each of the game’s individual levels.

Be like our UFO buddy and lend a helping hand.

Part Time UFO is an adorably compact odd job from HAL Laboratory. It may not be on the scale and spectacle of their other top-tier franchises or even as challenging as BoxBoy!, but it continually aims to provide players with a wholesome and satisfying experience that never wears thin. Part Time UFO manages to take a simple day job idea and expand upon it in all sorts of creative ways. The ideas it circulates around are nothing revolutionary to the industry or even its developer by any means, but it never falls short on the promise of being rewarding and pleasing to hop into for a few minutes or even an hour. The price hitch may initially seem like a turn-off for many returning fans, but anyone motivated to try out this outlandish day job will be nothing short of pleased.