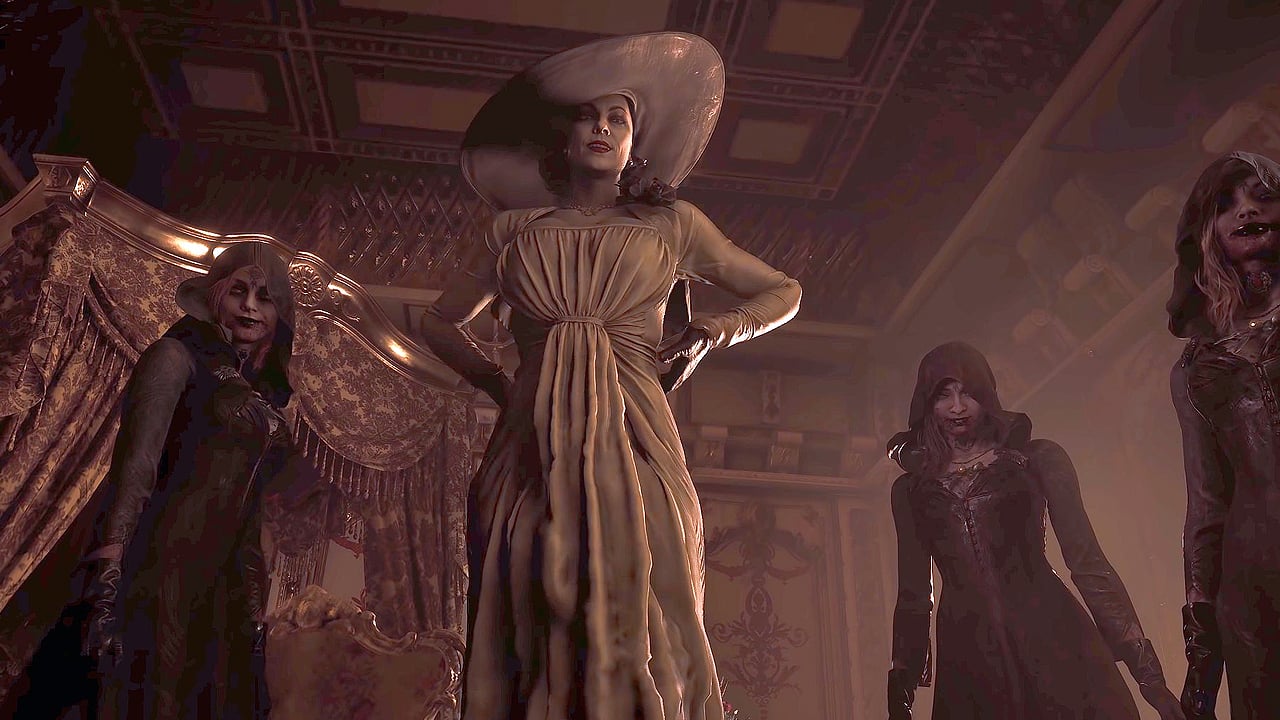 You may remember that a while back, I wrote about the tall vampire lady– known as Lady Alcina Dimitrescu- and the Internet’s obsession with her after she was revealed as a character that would be appearing in the next Resident Evil game, Resident Evil Village. Well, the game has now been released and the adoration of Lady Dimitrescu has far from died down. In fact, the love has extended to her three vampire daughters who appear as villains in the game as well: Bela, Cassandra and Daniela. I want to take a look at some awesome fan-made content that I found surrounding Lady Dimitrescu and her daughters- as well as a few that revolve more around Alcina and the games protagonist Ethan Winters- as it seems that the villainous quartet are certainly inspiring a lot of creativity. Let’s take a look.

So I’m kicking this off with a piece that doesn’t actually include Bela, Cassandra or Daniela at all but it had me laughing so hard that I had to mention it. A piece of fan art from @s_kinnaly on Twitter draws some rather relevant comparisons between Ethan and the Black Knight from Monty Python and the Holy Grail. A lot of folks have been finding it hilarious how badly Ethan gets hurt during Resident Evil Village– literally losing appendages at times- but he just kind of brushes it off. This fan art captures the whole situation perfectly and hilariously.

Some gender bending fan art from @laovaan on Twitter next. This shows what Bela, Cassandra and Daniela might look like if they had been the sons of Lady Dimitrescu rather than daughters. I love the creativity of this, with laovaan able to clearly show off the characters personalities- and make it clear who is who- whilst changing their gender. Awesome work!

A solo piece of Alcina fan art up next. I absolutely adore the pop art style of this one. It suits the character so well. This is so fitting and I kind of want this hanging on my wall. Brilliant work @sveta_has!

A little video game crossover up next- Mario and Resident Evil– from Twitter user @jivke. Princess Rosalina is a character from the Super Mario series, making her debut in Super Mario Galaxy and appearing in various spin off games ever since. In this crossover fan art, Rosalina is dressed as Lady Dimitrescu, complete with creepy clawed hand. jivke created this mashup as a tribute to tall ladies across the world as Rosalina is said to stand at around seven and a half feet tall, two feet shorter than Lady Dimitrescu. We stan a gorgeous, statuesque video game girl.

This one is one of my absolute favourites from @niallstensonart on Twitter as he mashes up Resident Evil Village with my favourite childhood cartoon: The Powerpuff Girls. Niall cleverly casts Blossom, Bubbles and Buttercup as the daughters of Lady Dimitrescu- which works super well, even down to having one redhead, one blonde and one brunette- whilst Sara Bellum- the Mayors highly intelligent aid- takes on the role of Lady Dimitrescu herself. This is just so perfect. Even the character personalities suit the vampire villainesses well (except they’re not quite as evil. I guess they’re not evil at all but you know what I’m getting at). Props to Niall for this super creative and clever mashup that is also a brilliant example of amazing 3D fan art.

A crossover with Korean boy band BTS next from @shmeemin, as they cast some of the members as the vampiric villains. The three youngest members- Jungkook, Jimin and V- take on the roles Cassandra, Daniela and Bela and group leader RM gets the lead role of Lady Dimitrescu. I love the characters expressions and designs in this one. It is the mashup no one was expecting but we are pleased to have it.

@gowonverses hasn’t played Resident Evil Village but manages to create pretty on point version of Lady Dimitrescu and Ethan within The Sims. That is their relationship in a nutshell right there. I love @Vales_arts perfect caption of this “tfw you’ve killed the man-thing.”

@Googleygareth creates a pretty epic image of the Lady herself slam dunking and @kirbysadventure gets the perfect caption for it. Chefs kiss.

Just a little mod showing what Lady Dimitrescu would look like in casual attire from @xZombieAlix next. I feel like this really shouldn’t work but it absolutely does. Thanks for this @xZombieAlix!

Inspired by that casual clothing mod I just mentioned, @TeRa_art1 created this excellent fan art showing the lady and her girls off for a shopping trip. Tremendous work!

@AnnaSassiArt has actually done quite a few pieces of fan art based on Lady Dimitrescu and her daughters so let’s peruse a few of them. Another villain from Resident Evil Village is Karl Heisenberg and here he has been cast as the doting uncle who gifts his three nieces an adorable puppy. The story isn’t over here though…

Alcina approves of said puppy and he becomes her tiny companion. Look at that size difference. I am in awe.

Another villain in the game- doll maker turned mutant Donna Beneviento- acts as a little sister to Alcina in this next piece of fan art. I really like how creative these artists are getting with the characters and their relationships.

The good lady and her daughters are out for a ride in this next piece from @AnnaSassiArt. Can we take a moment to appreciate the demonic horses here? Especially Alcina’s humongous one. Also, Lady Dimitrescu in jodhpurs is not something I knew I needed until now.

Yep, I can totally see this happening. Cassandra should probably work on her aim in the future.

Last one from @AnnaSassiArt as Lady Dimitrescu and the girls sit down for a nice bit of family bonding over the piano. Now I’m just sad that they couldn’t have a normal family life. Absolutely marvellous work though. Thank you @AnnaSassiArt!

@BS_artsss shows off Lady Dimitrescu giving her best dragon impression here. I love this one, it’s so eerie. Look at those claws!

No family portrait is complete without bloodied fangs, claws for hands and a blood drenched sickle! I love the cartoon art style of this one from @noctart.

This one isn’t fan art, it is just depressing but I wanted to share it nonetheless. @hbiczelds posted a screenshot that shows Lady Dimitrescu’s reaction when she finds out that her daughters have been killed by Ethan. Now I am sad.

Artist @Luverihu creates this beautiful piece of fan art of the girls and their mother next. This looks like it was pulled straight from an animated series. Capcom, make this happen.

Another pop art style fan art piece up next and this one looks just like a classic cartoon movie poster. I love the creativity! Brilliant work from @Middaymassacre.

This Fire Emblem: Three Houses crossover- featuring teacher Maneula in Lady Dimitrescu’s outfit- works far better than it has any right to courtesy of @shynrinn.

Finally, just a mother and her three gothic daughters off to a Korn concert. This is both adorable and accurate. Thanks for this @greatestjubilee.