The ambition behind Pieces Interactive’s Kill to Collect results in a project that creates too many conflicting feelings. Kill to Collect suffers from frustrating design concepts that often force excitement to a sudden stop. The complexity of this game is both a marvel and a migraine. In many ways, the game offers a thrilling experience that rewards patience. But for each rewarding moment, there exists some form of unengaged frustration. The result is a feeling of fatigue that will cause even the most dedicated of players to lose interest over time.

Set in the cyberpunk city of Geoshelter Alpha, the premise of Kill to Collect is a love-letter to the arcade adventures of decades past. The game’s roster features four unique bounty hunters, whose only motivation is to accept various contracts that will place them in the frenzy fueled streets of their dystopian home. Kill to Collect’s retro influences are transparent. Each aspect of the game, including a synth-heavy soundtrack and character designs that are pulled directly from the 80s, succeeds in creating a convincing world that is never brushed aside during gameplay. Commitment to this retro outlook, however, causes some of Kill to Collect’s most sinful design choices. The game’s simplistic design is unfortunately tied to its story design. Much of the narrative is delivered through mission descriptions and enemy dialogue, which would not be an issue if these moments were well-written. Instead, the few characters that do speak are reduced to tacky and lackluster one-liners. 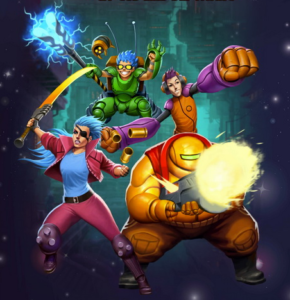 The playable characters themselves suffer from being little more than just reiterations of arcade stereotypes. Players can select from a hulking, ranged tank, a cyborg that prefers close-up punches, the tech-reliant staff wielder that deploys turrets, and a swift sword-player who slashes her way around multiple foes. Despite being entertaining enough in appearance, these characters fail to set themselves apart from a decades-long roster. The design of Kill to Collect’s enemy types is hardly any more satisfying. After having completed a couple of the story’s bounty contracts, players can expect fatigue from fighting through waves of enemies that are hardly different from their predecessors, beyond altered color schemes and attack patterns. Many of the bosses are actually just strengthened versions of regular enemies, removing a sense of individuality from battles that should feel memorable. Level design is equally frustrating in its ability to provide stunning spaces for chaotic battles at times while occasionally tossing players into rooms that come across as bland and rushed. The aesthetic pain of Kill to Collect is simply that it amazes enough for its inconsistencies to appear ugly and anti-thematic. 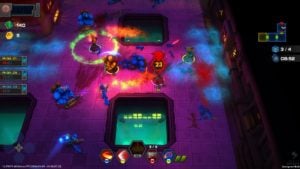 Kill to Collect’s combat mechanics are part of an organic system that forces players to concentrate on the slightest of details. Following a roguelike design, levels are procedurally generated to allow each attempt to be different from the last, with a top-down perspective. Players must defeat all of each level’s randomized list of enemies in order to progress to the boss level. Whether preferring a head-on or tactical approach, each of Kill to Collect’s playable characters is designed to foster different playstyles. Naturally, combining these through cooperative gameplay creates the engaging dynamic that this game prides itself on.

At its most efficient this system works as a heart-racing experience that forces careful notice of enemy attacks, positions, and the player’s own abilities. The fun of this comes from the fact that this will undoubtedly test all skill levels. Even one mistake has the potential of erasing a player’s progress. With the addition of a diverse set of abilities, items, and upgradeable skills, there is enough variety in Kill to Collect to account for many distinct playthroughs. But Kill to Collect is often weighed down by its roguelike inspirations. None of the aforementioned upgrades are permanent with the exception of cosmetic upgrades to character appearances, which makes for a lack of motivation to strive toward any specific upgrade. Many levels will be populated by an assortment of enemies that will disappoint due to overwhelming difficulty or because of repetitive patterns. In fact, after learning the attack patterns of any enemy type much of Kill to Collect’s combat can become a boring cycle of dodging and attacking. 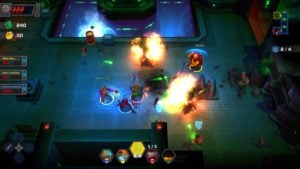 The story mode is essentially an advertisement for Kill to Collect’s alternative game modes: Free Hunt Mode and Challenge Mode. The first of these allows players to complete any of the game’s bounties in any desired order without the addition of story elements. The latter is much more interesting as a multiplayer challenge that tasks players with completing eight randomly generated levels, which are updated daily, at their own pace in order to increase their leaderboard scores. Beyond this novelty, however, this experience becomes uninteresting to all but the most hardcore of players. What’s worse is that Challenge Mode draws all of Kill to Collect’s gameplay flaws and places them in the spotlight. The difficulty of this mode can make for an intriguing brawl sequence, but the frequent result is a conflict with a boss that is given an unfair advantage. After struggling to squeeze enjoyment from these aggressive scenarios these game modes fail to captivate enough for prolonged play.

Kill to Collect is a glance at what a wonderful game could be. This is an honestly enjoyable product that can be adopted by any type of player. Though many of its components are addictive, fun, and charming, others prove to fall short of satisfying. Kill to Collect is a beautiful reference to the thrills of arcade gaming. But its many successes lead Kill to Collect’s mistakes to become obvious and unforgettable.