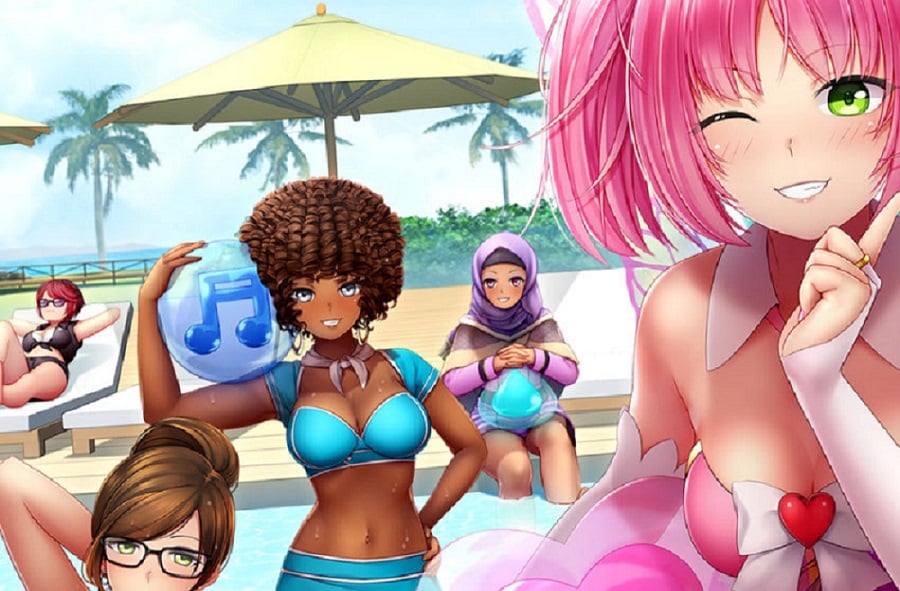 In an industry increasingly rife with censorship, the HuniePop series has been a great example of the freedom self-publishing affords. The first title was a breakout Kickstarter success story that delivered high-quality art, full voice acting, and one of the most addicting versions of the match-3 puzzle formula to date. HunieCam Studio soon after was a fun management sim spinoff that didn’t quite reach the heights of its predecessor. Now, nearly six years after the original, HuniePop 2: Double Date has finally graced the PCs of pervs and puzzle game aficionados alike–and though its pacing might be different, it’s an improvement in almost every way.

An Island of Dreams

HuniePop 2 is a direct sequel in every way. It picks up several years after the events of the first, where the previously bumbling protagonist (you) is now a rich world-class playboy/playgirl enjoying all sorts of debauchery on a daily basis. Kyu suddenly pops up out of nowhere to inform you that two celestial are about to be awakened by a terrible period and go on a world-destroying PMS-fueled rampage. Earth’s only hope is for you to study the art of double dating (in this case, taking two girls on a date simultaneously) and have a load of threesomes to earn enough fairy wings to…well…let’s just say a healthy suspension of disbelief is required to enjoy to plot even a little.

For as silly as the overarching premise is, it opens the door for many more character interactions than had been previously possible. Girls must be at least somewhat compatible for you to date them, whether that means they’ve known each other for years or they had a chance interaction on the beach one day. Seeing the mini storylines for each pair play out ranges from serviceable fun to “Woah, how’re they going to get along?” similarly to the support conversations in modern Fire Emblem titles (but at a smaller scale).

The writing is just as raunchy and irreverent as ever, walking a fine line between delivering expertly-timed jokes and degenerate drivel. As characters, each girl is well-realized through top-notch voice acting and some shockingly realistic dialogue (I’d sometimes feel genuinely bad when responding to a girl’s emotions the wrong way). From confident and independent flight attendant Lola to shy and inexperienced Lailani, there’s a diverse cast of new and returning girls to meet, date, and ultimately sleep with. There are even some gag characters thrown in with the express purpose of being annoying and providing comedy relief (looking at you, Sarah).

Turning Up the Heat

The core gameplay loop of HuniePop remains the same: meet a girl, chat, go on a date (where the puzzles happen), and repeat until it’s time to do the deed. The twist this time around is all about simultaneously entertaining both girls on the date. This means players have to reach the required score threshold for every puzzle session while swapping back and forth between the girls on either side of the screen. To make things even more interesting, HuniePop 2 introduces two new systems: stamina and baggage. Stamina is relatively straightforward: each girl has a stamina gauge, and every three-of-a-kind match depletes one block of stamina and restores one for the other girl. This makes constantly switching between the two a necessity (especially since matches higher than three-of-a-kind deplete more blocks at once).

Baggage is its own beast. The more you talk to a girl before a date the more they’ll open up to you, eventually revealing personal traits, issues, and medical conditions that take the form of puzzle modifiers. For instance: because Jessie is a heavy smoker, she’s developed emphysema, which translates to a 20% chance that she’ll fail to recover stamina when another girl makes a move. Likewise, since Lola is addicted to caffeine, she’ll absorb all stamina matches even if they’re meant for the other girl. These unlockable modifiers do an admirable job of adding an extra layer of depth to puzzle sessions while remaining true to each character, and for that, they’re a welcome addition.

However, that also brings us to HuniePop 2’s most glaring issue; its difficulty balancing. In the first game, players were able to boost the effectiveness of different types of pieces (Romance, Talent, Flirtation, etc.) by investing in them with Hunie, which was earned by talking to the girls and giving them gifts. Keep failing a certain date? Just rotate between the girls and chat them up until you have enough for an upgrade.

In HuniePop 2, though, there are no upgrades; just gifts and food items. And while there’s more depth than ever when it comes to planning out which date gifts to bring along (each with their own useful effects), the loss of that optional grind and the addition of a stamina system means that the Easy difficulty in HuniePop 2 l is more challenging than the Normal difficulty of its predecessor. Worse yet, Easy mode removes all the effects of baggage; it can still be unlocked, but the modifiers won’t do anything. It’s unfortunate that instead of building a customizable difficulty system–where the numbers of moves per session can increase and decrease and baggage can be toggled off and on–lesser-skilled/casual players have to forgo one of the most meaningful steps forward for the series.

HuniePop 2: Double Date is an improvement over its 2015 predecessor in almost every way. The UI and art are sharper and more vibrant, there’s more depth to each date due to new puzzle mechanics and gift effects, and the wealth of interactions between the girls thanks to the new double date system are undeniably entertaining. That said, whereas the first game was more of a fully-fledged dating simulator that required players to get to know each girl over the course of five dates (cute/steamy texts included), this is much more of a “race to the CGs” type of experience. If you’re just in it for the writing, art, and puzzles and don’t mind a challenge, though, HuniePot’s unique twist on the dating sim genre is still in a league all its own.