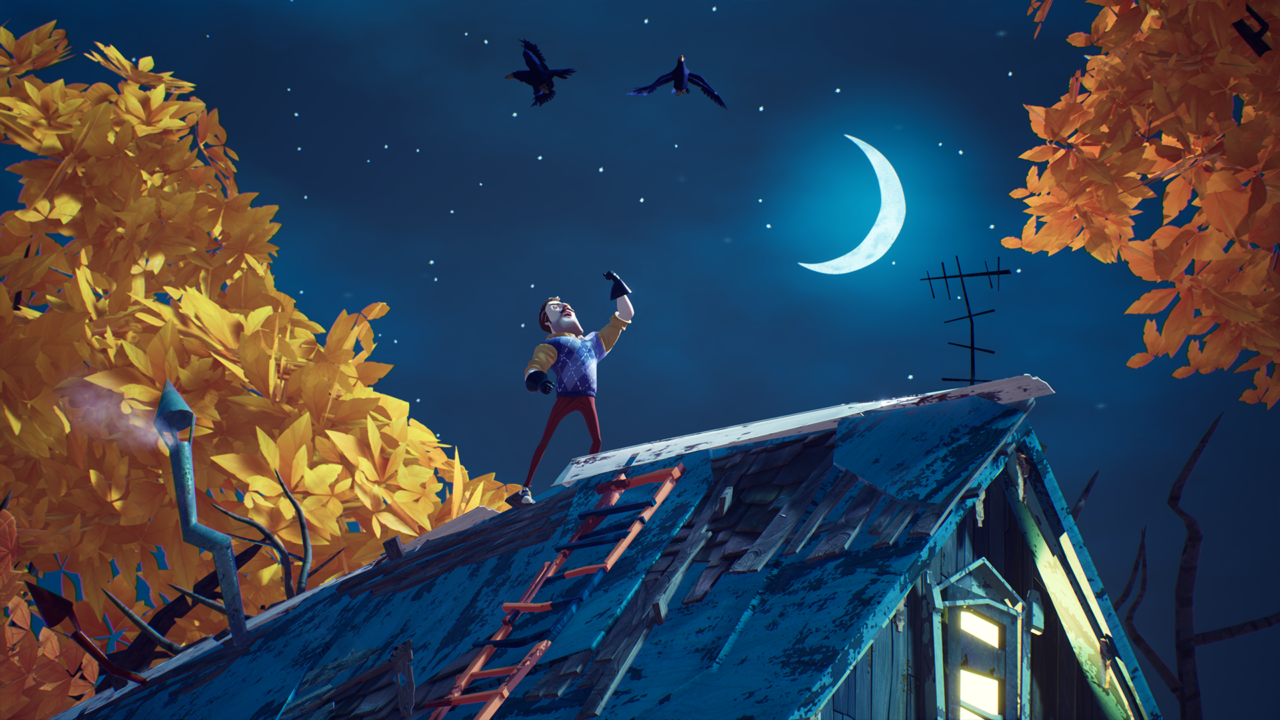 This strange open world is quickly revealed to be incomplete, as players will find themselves spending their first half hour after the tutorial looking for the first interactable house. Even though everything takes place on a single map, the game is still rigidly divided into acts. A new act begins when the player finds the final key item from a previous building, triggering a cutscene as a new building opens up.

Gameplay and the Open World

At its core, Hello Neighbor 2 is about solving puzzles and delving deeper into a building, all while hiding from a single enemy. Many stealth horror games see their protagonist sneak around a small area, solving puzzles and collecting clues before the big monster catches them. Hello Neighbor 2 distinguishes itself from the genre in 2 ways, neither of which are very good: it is not a scary game, with not even a single tense moment in 5 hours, and it doesn’t really have any puzzles to speak of.

Puzzles never get more interesting or complicated than finding items in a set and arranging them based on environmental clues, like a drawing or a string of colors. Most of the game is then spent shuffling around each building looking for key items, which are often extremely well hidden. This leads to another problem, this time with the wishy-washy open world setting. Unable to find the final puzzle item needed to finish a building, players might wrongly decide to expand the area in which they’re looking.

Starting from other rooms, going to other floors, players will eventually leave the house for the garden. Soon they’ll be looking all around the city, only to find that missing item stuck at the end of the only vent shaft in the game, tight where they started. What makes matters worst is that, on a few occasions, the game does hide key items out in the open or in nearby buildings without really pointing to them.

At time of writing, a few days before release, Hello Neighbor 2 is still poorly optimized and full of bugs. In this department, the enemy AI is probably the worst offender: enemies get stuck in endless loops walking through the same door over and over; they won’t catch the player as long as they’re mid-jump, or crouched under a table. This can lead to some fun realizations, like how hiding on top of a wardrobe is always better than hiding inside. This will also lead to frustration as the game completely breaks the moment that the AI stops working.

A lone enemy is the only thing stopping the player from solving the treasure hunt/brain teaser combo that are the buildings’ puzzles. Obviously, if that enemy gets stuck doing laps from the kitchen to the porch, the game is as good as done. But even if the AI was entirely functional, stealth couldn’t hope to carry the weight of the entire game, since slow exploration and careful planning are the worst way to approach the game.

As even a brief furious ride through the first house will reveal, the best strategy for each level is to run straight to the objective and ignore the enemy, since getting caught teleports the player in front of the house, ready to try again. If they don’t get caught, they can leave through one of the many entrances and let the enemy immediately forget about them, before sprinting to the next objective. Enemies are slower than the player and they never try to catch them outside a building. There really is no reason to play any other way, even if the tools at the player’s disposal suggest otherwise.

Popular wisdom says that the best adventure games aren’t just a series of puzzles and plot beats played as reward. Puzzles should intertwine with the story uninterruptedly, serving as introduction, delivery, and thematic shorthand for the larger plot. Hello Neighbor 2 had great plans for its AI, open world structure, and story, and even if it couldn’t do any of them successfully, it is the complete lack of cohesion that really kills the game.

Another issue the game has, or rather an issue that players might have with the game, is that the (not very generous) price tag of $40 does not include the game’s fifth and sixth playable levels. Back to School and Late Fees, which are considered DLCs but seem to be a vital part of the otherwise inconclusive story, are only available as part of the $60 Deluxe Edition. Day one DLC is nothing new, nor is it indicative of lower quality, but it feels like the game might have used those extra 2 levels to add to the low playtime, which is currently below 5 hours.

Anyone who still wants to pick up this game should at least wait a few weeks until bugs are patched out and features are added. At the very least, they should try out the playable Steam demo before deciding if they really want more. Alternatively, players in the market for puzzle games about exploring 3D environments should consider getting Escape Academy, a solid narrative-driven game of escape rooms, or the straightforwardly named Escape Simulator, an escape room sim with nearly countless, constantly updated content.