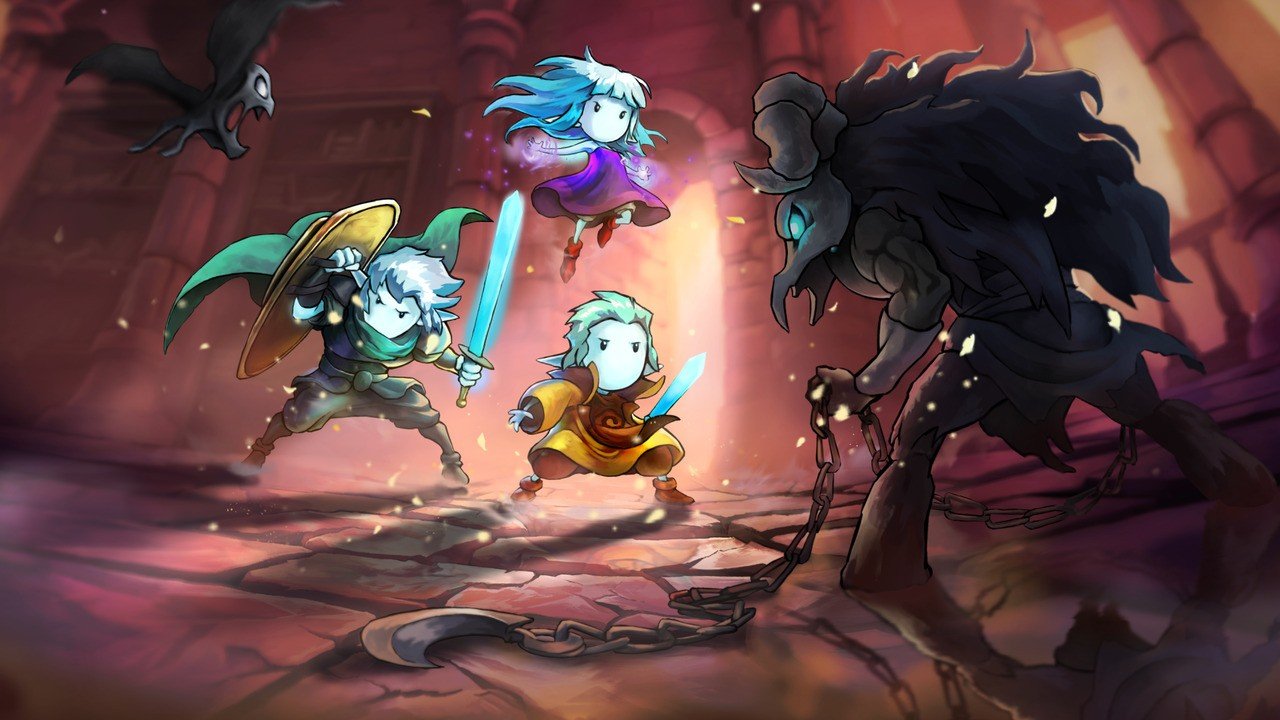 While it may not attempt to break through innovative barriers with new ideas and original concepts for modern game design, Greak: Memories of Azur from Mexican developer Navegante Entertainment is a simplistic and stunning work of wonder. The upcoming side-scroller inspired by titles like The Lost Vikings on Super Nintendo and Ubisoft’s Child of Light never holds back when focusing on refining the experiences its inspirations once forged. Greak: Memories of Azur is an epic worth discovering that prevails in an oversaturated genre as it manages to hammer down thought-provoking and thrilling gameplay with beautiful visuals.

While Greak: Memories of Azur is not too story-heavy, it does contain a heartwarming tale of three siblings attempting to reunite before they can evade destruction together. When an invasion from the Urlag faction rapidly descends on Azur’s remaining inhabitants, a magical race of beings called the Courines makes a desperate run for a promised land their allies have already fled to. While the concept is indeed reoccurring in fiction, its usage throughout the game does give the main cast a sense of urgency as Greak is able to establish a compelling tale with concrete direction while staying keen on flaunting its core focuses.

The game’s main goal is to commit to two specific tasks: reunite your siblings and help with the construction of an airship to escape the incoming catastrophe. As to be expected by the title, the sibling you first control is the eponymous Greak, a young and evasive sword wielder who has always wanted to be a scout for his people. As players progress through the story and venture into the local locations of Azur, they will discover Greak’s sister Adara, an oracle who utilizes magic, and his older brother Raydel, a scout that upholds the characteristics of a determined soldier. Inspired by The Lost Vikings, the player must multitask all three characters at once.

The siblings of Greak: Memories of Azur all compliment each other almost perfectly. Each character focuses on providing different skill sets that are effective in unique ways within both combat and puzzle-solving. While Greak has great attacks and jumps, Adara can float mid-air, shoot projectiles, and swim fast underwater. Meanwhile, Raydal is a heavier version of Greak who has a sturdy shield and grapplehook; however, he can not swim or make some of the higher jumps. The cast is relatively balanced and retains individual shortcomings that force the player to really think around how they solve puzzles and traverse the world of Azur. While it looks like players could bull-rush through the world with any character, the reality is they more than likely can not due to their shortcomings.

The one complaint players may have with Greak: Memories of Azur‘s cast is the fact that Raydel upsettingly arrives rather late into the story — in other words, he is the one character players get to use the least. This can make him feel slightly underutilized in comparison to his other siblings, yet he still enters the narrative in a delightful way and is a blast to play as. His underutilization only comes from the length of Greak as players will more than likely use Raydal for only a third or perhaps even less of their total playtime. While his overall overarching usage when playing may be disappointing, his impact and playstyle are still able to steal the spotlight in the game’s closing hours.

In terms of exploration, the game is a strange mix between a standard side-scroller and a light Metroidvania. Azur is one big interconnected world with multiple entry points to different areas of the map. However, as mentioned before, utilizing all three characters in tandem is the only way to discover the fastest ways to traverse the world. There are certainly many times where players will have to backtrack, but because of how unique the majority of the world looks, it is easy not to get lost. To progress through Azur, players of course will be platforming, solving puzzles, and fighting hoards of enemies.

The puzzles, while not huge mind-twisters, often provide a thoughtful amount of challenge and experimentation to work through. Many of the puzzles involve sending the party in separate directions to proceed to the next area, but they are all extraordinarily well executed. Greak’s puzzles are not obstacles that you can simply blast your way through. Knowing when to use a specific sibling or when to even tackle the objective of the area is key. That being said, outside of the final enigma, the game does not provide that much difficulty with its puzzles. They are complicated but have a welcoming balance that will not force players to pull out a dedicated guide.

The combat of Greak: Memories of Azur, on the other hand, upholds the greatest battle for players. Greak is not the easiest side-scroller to grasp because of the endurance and patience the combat requires. Due to how little health each character has and how easy it is to get hit, the game’s difficulty can drastically increase when players do not take the time to observe and experiment against their enemies. There are times where a solution could be as simple as charging through an opponent and attacking to take them down. With how lenient and accessible checkpoints are in new areas, the game is constantly giving players the opportunity to take chances and fail so they may succeed with satisfaction.

The only aspect of the combat that can be a downside to its structure is the reality that there is almost no point in killing enemies. While the player can go off on a slaughter spree, oftentimes enemies will leave behind either nothing or a reward that is practically dismissable after their demise. It is a shame that Greak: Memories of Azur does not have skill trees or upgrades that are rewarded for taking out enemies, but with how solid the combat is, it is hard to ask for more from Navegante Entertainment’s small studio of four people. Additionally, the game could use more unique enemies as there are probably around less than a dozen that players will actually come across.

The best part of Greak: Memories of Azur though is without a doubt its stunning hand-drawn visuals. The entire game looks downright beautiful whether you are looking at the gorgeous backdrops or cutesy and terrifying character designs that are flooding the world of Azur. While I may just have mentioned a lack of unique enemies, it is impossible not to compliment the designs of what is being offered — and that sentiment goes for everything in general. On top of all this, the cinematics are always chock-full of detail and are glorious to watch. Although they are extremely short, they feel like a true reward for progressing through the main story.

The game’s soundtrack from composer Majo Felix also deserves a special mention. Greak: Memories of Azur has an absolutely fantastic soundtrack, albeit one that is far too short for its own good. The soundtrack is constantly expressive of the game’s hopeful yet melancholy tone and is always well-tuned to each landscape. The main theme feels triumphant but is upsettingly overused throughout the game. If Evangante Entertainment were to develop a sequel or DLC to the game, they absolutely have to bring back Felix for a longer score.

Navegante Entertainment’s first title may not be something that is sprouting with innovation, but Greak: Memories of Azur offers a refined love letter to its inspirations as it digs into an oversaturated genre of games for a solid outcome. It is an appreciable side-scroller that is constantly out to give players the best experience possible as it focuses on meticulous gameplay and all-around memorable visuals. Greak and his siblings’ journey to save an imperiled race will have you hooked till the end as its key selling points never grow stale — and that is absolutely what matters most.

Greak: Memories of Azur should unquestionably be on your radar for side-scrollers to play this year and Navegante Entertainment will be a name to look out for in the near future. Azur’s inhabitants better return in a sequel or prequel story!