Good horror villains always come back, and thankfully so do killer game ideas. After nailing the concept of a splatter-filled slide puzzler with their homage to cheesy 80s slasher flicks, Slayaway Camp, developer Blue Wizard Digital returns to the same unholy grounds, this time replacing their generic Jason Voorhees stand-in with the real deal. Friday the 13th: Killer Puzzle puts players in charge of one of the most infamous movie murderers of all time as he plots his way through over 150 isometric maps, leaving a trail of cartoonishly dismembered bodies in his bloody wake. Don’t let the hockey mask and blank stare fool you, though — this kind of butchery is going to require some brains.

For those unfamiliar, the key to solving Killer Puzzle‘s various stages lies in finding the correct sequence in which to slide Jason across each grid-like map. Like the unstoppable force that he is, there is no way to control the character once he is moving, and momentum will win out until he hits a wall, a trap, or a victim. Luckily, any mistakes can be easily overcome by the unlimited ability to rewind each move, or enact a quick restart entirely. Stages are expertly designed to take advantage of this system, wading gently into the bloody havoc at first while introducing new wrinkles — like telephones, turn limits, and warp stations — in near-tutorial fashion. These mechanics will then eventually be toyed with, playing on expectations and twisting them delightfully. 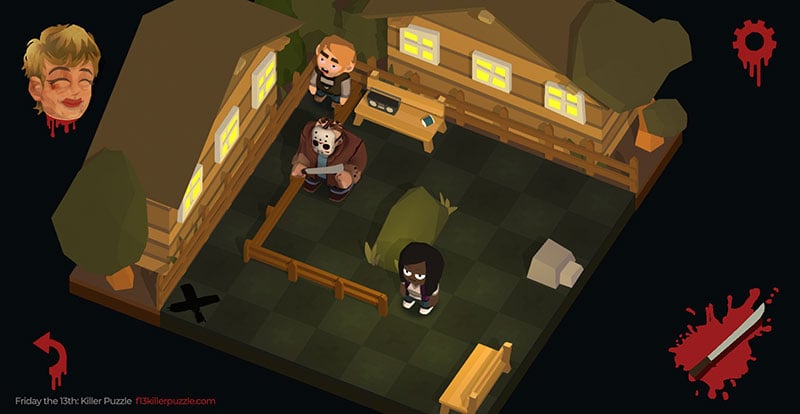 Things do get tougher in the later “chapters,” but the learning curve works wonderfully, and even when Friday the 13th: Killer Puzzle attacks players with mazes that seem as if they offer an overwhelming amount of options, there are subtle visual clues that the now-trained mind can pick up on. Blue Wizard Digital has also enhanced the controls with better button placement — the benefits of which become immediately apparent upon rebooting Slayaway Camp — and they have again included some quality of life options that allow players to get hints, see the solution, or even skip a level  entirely (just ask the severed head of Jason’s mother!). Regardless, anyone who played Slayaway will feel right at home, and the quality of puzzles feels even more perfectly balanced in this pseudo-sequel.

Beyond the slight improvements in playability, the developers have also overhauled the visuals of their diorama worlds. While these vignettes don’t necessarily include more details, they have been made less pixelated, causing items and backgrounds to be far more easily distinguished. This refined look doesn’t really affect the gameplay side of things, but it does help with setting the mood across different settings from the films and beyond, such as a Camp Crystal Lake (naturally), Manhattan, a space station, and even some time-travel extras (Jason in Victorian England posing as Jack the Ripper would itself make for an outstanding movie). 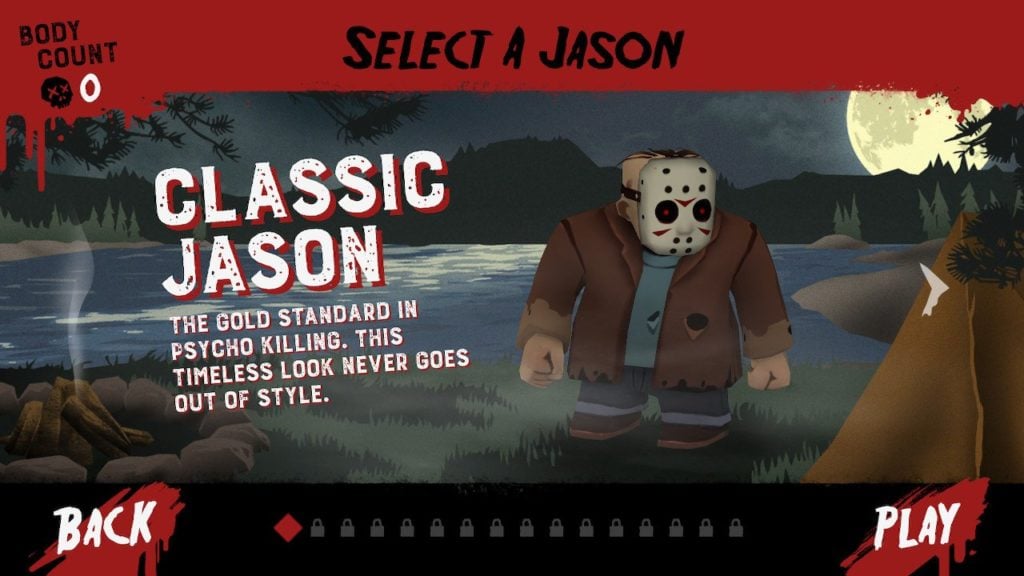 Additionally, instead of being populated by Minecraft-like block people, Killer Puzzle‘s helpless teenagers, dumb cops, and ruthless SWAT teams have also given a makeover. Faces are round and expressive, conveying the sheer comic terror and pleas for mercy with greater range, and limbs now can flail freely. While that blocky look certainly had appeal in its amusingly stiff innocence, Blue Wizard has struck a decent middle ground in allowing for greater flexibility in movement while still keeping things adorably light-hearted.

Speaking of hearts (especially those removed while still beating), violence plays a big part of the appeal in Friday the 13th: Killer Puzzle. Each stage is filled with unsuspecting prey, their goofy eyes unaware of the hulking behemoth that hunts them — until he staves their head in with a crowbar. Sliding into one of these NPCs causes baseball-bat bashing, machete slashing, chainsaw sawing, power drilling, and any other number of gruesome red deaths thanks to a weapon unlocking system that includes some real oddities (Toilet seats? Garden gnomes? Why not?). Much like with the later movie sequels, the gore is all done in fun, and is in no way realistic — the first over-the-top scream does the job in conveying the ridiculousness, and thanks to some excellent voice work, these shrieks never stop being funny (though parents can turn the violence to ‘PG’ in the game’s settings if they like). 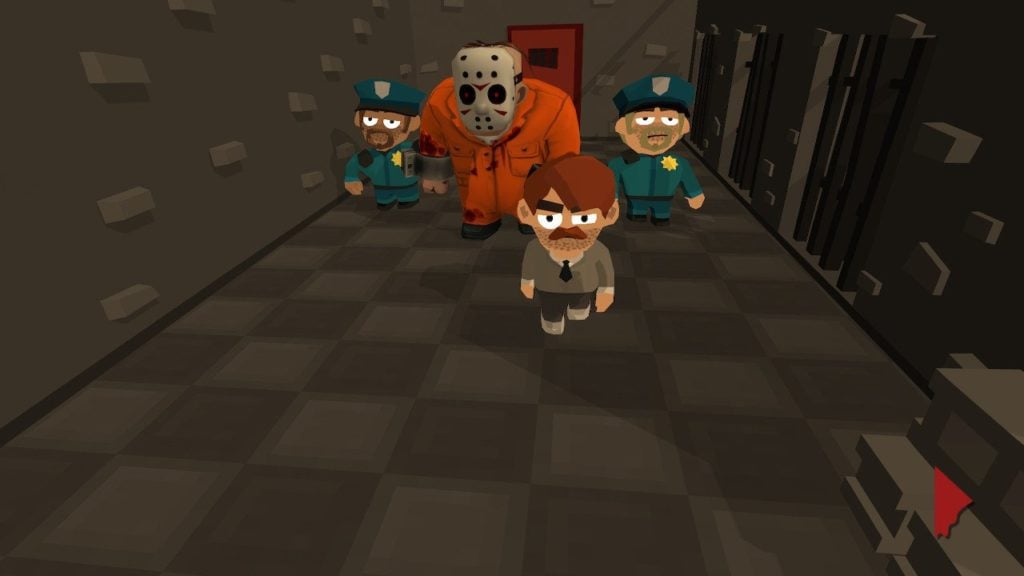 Completed stages are followed by timing-based kills that offer the chance to collect some blood for a hockey mask-shaped kill meter, which when full, causes a crate to appear with random weapon loot. These weapons can then be swapped in and out on the fly within levels, letting players better orchestrate their own symphony of slaughter.

However, the actual murders are one area where this Killer Puzzle doesn’t quite measure up to its predecessor. While there is plenty of splatter-filled gore and oodles of goofy shrieks, the developers seems to have reined in their imagination a bit when it comes to creative cut-scene deaths. Despite having a plethora of sharp and blunt weapons at their disposal, animations in these little treats are often recycled, causing the impact of the variety to feel diminished. Slayaway Camp depicted nail gun shootings, killer bees, death by alligator, explosions, and many other hilarious demises that unlocked in packs, which could be purchased with in-game currency. Seeing what crazy idea the developers would come up with next was a nice reward, and a big part of that game’s charm. That they were lampooning all manner of slasher films in that title probably allowed for greater freedom, but seeing Jason stick mainly to the same stabbings and bludgeonings, especially when the weapon in hand doesn’t quite mesh with the animation, does get a bit stale after a while. 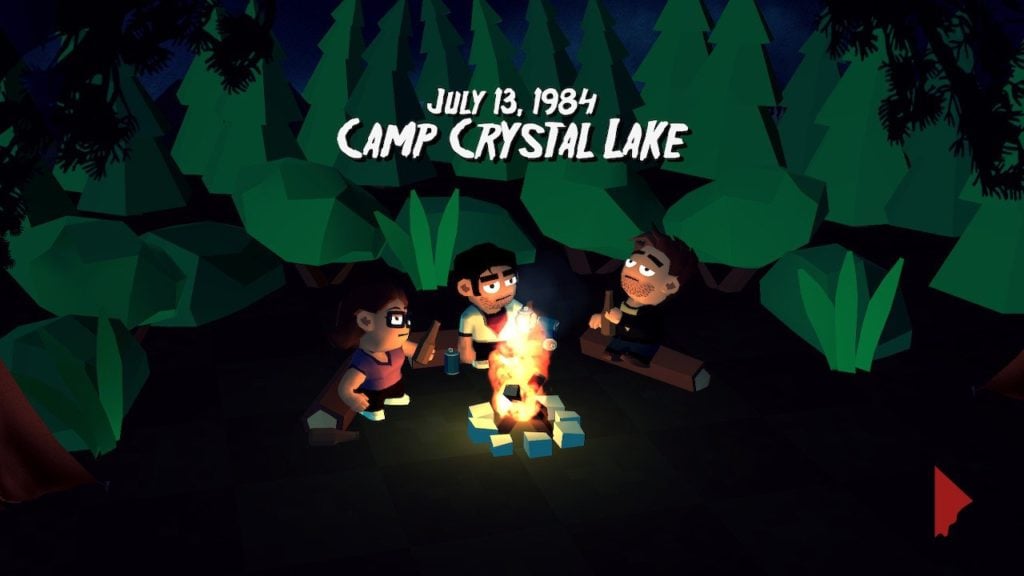 Also, while there are a good deal of references to the Friday the 13th movie franchise —  “Final Suzi,” the severed head of a motherly Mrs. Voorhees as your guide, “ki ki ki, ma ma ma,” etc. — it would have been nice to see more Easter eggs in the stages and menus themselves, personal touches jam-packing the game full of sights and sounds for series diehards.

Nevertheless, Friday the 13th: Killer Puzzle shrugs off these pitiful attacks with the kind of superhuman strength that will keep players coming back again and again for just one more kill… er, finely crafted puzzle. It takes a heavy-footed step forward in design, even if regressing a bit in the zaniness, but should provide a bloody good time for those who like to have their brains pushed, then see others’ smushed.