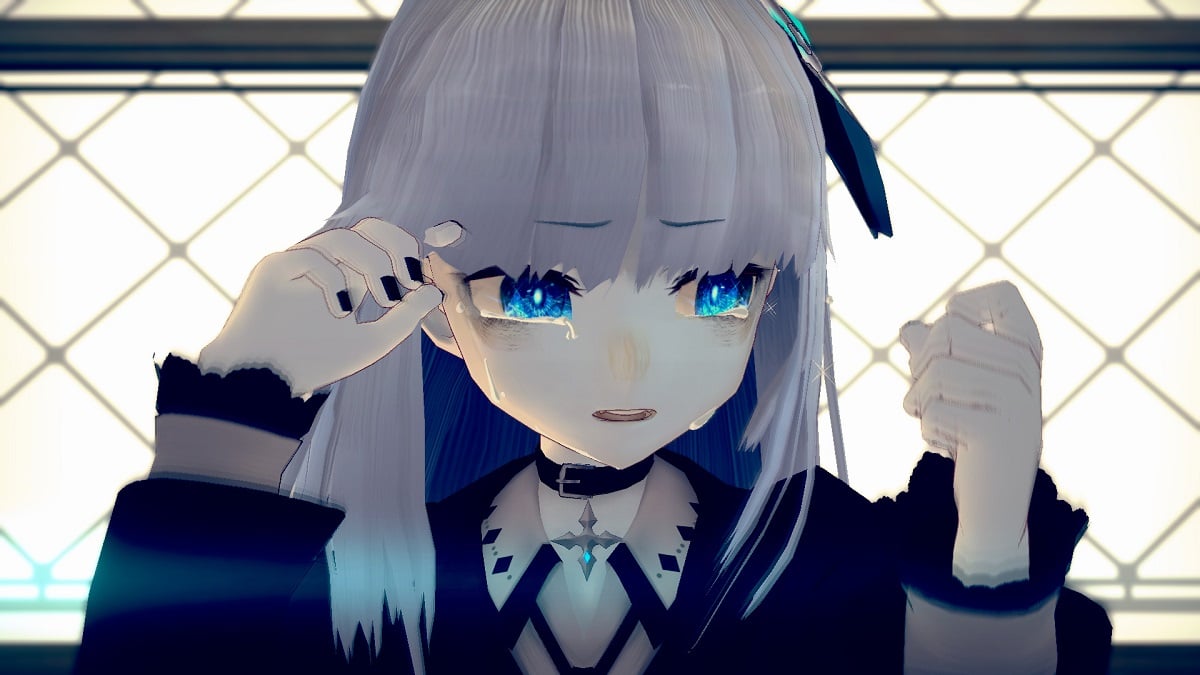 It’s all too often that an RPG put players at the center of a major conflict and tasks them with saving the world, winning a war, defeating a great evil, and so on. It therefore feels incredibly refreshing when a studio decides to flip the script and home in on a more personal narrative with smaller stakes but greater emotional impact. Crystar is precisely this; it’s a vivid, heart-wrenching story about a young girl who’s torn away from her family and plunged into a desperate search for her little sister’s soul before it’s gone forever. And while it’s clear that more time and energy was poured into the writing and presentation than the gameplay, that story is absolutely worth experiencing firsthand.

Rei Hatada is a shut-in who barely goes to school and hardly leaves the confines of her room. Despite suffering from severe social anxiety, she loves her family and they all work together to care for her. One day, Rei finds herself ripped straight from her room to the confines of Purgatory along with her little sister, Mirai. There’s no rhyme or reason for it; they haven’t died, and yet their souls have been torn away from the land of the living. After speaking with souls of people who actually died in a rather harrowing opening sequence, it’s revealed that the sisters were brought to Purgatory by a powerful underworld being known as a Revenant to have their souls consumed. Following a shocking turn of events that leaves Mirai’s soul adrift, Rei is offered a deal by the demonic overseers of Purgatory: gain the power to fight off the forces of the underworld and find her sister’s soul in exchange for signing her life away to be their enforcers for the rest of her days.

Crystar is built on a bleak, depressing premise that’s softened by a playful tone and charismatic characters. The somber focus of Rei’s exploits never wavers, but she’s gradually able to find pockets of happiness thanks to the companions she meets along the way. Each of these girls are introduced with their own heart-breaking backstories through a mix of flashbacks, news reports, and conversations. It’s easy to dismiss the crew as simple eye candy—players can change the clothes of each in-between missions and there are certainly some less-than-appropriate options—but there’s not a single party member that feels inconsequential or underdeveloped. Seeing the girls gradually form a bond as they get to know each other and work their way through the underworld is heartwarming, and despite the abundance of anime tropes—Kokoro’s infatuation with cute girls is guaranteed to turn some players off—it all works to cut through the otherwise oppressively-heavy subject matter.

A Long Road to Glory

For all the bells and whistles that developer FURYU wrapped it up in, Crystar is a rather straightforward action-RPG at heart. Purgatory is full of monstrous souls looking to devour each other in hopes of one day being reborn, and Rei and team are tasked with taking them out before they cause too much havoc. This manifests in a consistent yet repetitive dungeon crawler loop where players spawn into a map and have to run down several different routes to find the exit, destroying monsters along the way. The map gradually fills in as progress is made, and the ability to overlay the entirety of it on the screen instead of relying on the mini-map in the corner is a godsend in terms of efficiency. Still, it’s a constant guessing game as to which path to travel down, and since it’s often worth it to explore the entire level before finding the exit, accidentally going in the right direction usually leads to having to backtrack across large sections of the map. It’s a frustrating design choice for those with minimal gaming hours to spare, but it also plays directly into one of the Switch’s strengths: being able to grind in handheld mode while watching something else in the background.

Exploring every corner of a level pays off because of how crucial crafting is in Crystar. Rei and company wield Sentiments, special kinds of weapons that come from the purification of Torments. Torments can only be gathered by defeating the aforementioned extra-powerful monsters called Revenants. The more Revenants defeated in a run, the more materials to create weapons, armor, and accessories with. Fusing Sentiments into stronger forms is also absolutely necessary to keep up with the game’s difficulty curve, but this requires using a certain number of Thoughts–another material type–that can only be grinded for by defeating monsters, found by opening capsules scattered around the map, or purchased using currency gained by grinding monsters. In short, Crystar demands a lot of repetition and map exploration from those looking to level up their gear and have a fighting chance against bosses.

To switch things up a bit, there are a variety of optional missions players can go on for the sole purpose of collecting resources outside of the story. Unfortunately, these side missions don’t stick out much because maps are frequently recycled. It’s not unusual to be darting across a map and get a sense of déjà vu as the realization hits that you explored that very area during the last story mission. It’s an understandable constraint given the scope of the project, but it can nonetheless be a bit jarring considering how polished nearly every other facet of the game is.

If confusing and repetitious level design is the main issue Crystar faces, combat is the serviceable yet ultimately underwhelming sub-issue. Each party member has a light attack, heavy attack, dash, and a variety of specials that can be mapped to each of the face buttons (so four are usable at a time). The girls all have unique fighting styles that cater to long and short range, and they can be swapped out almost instantaneously with a tap of the d-pad. Players are even encouraged to frequently swap between party members with a system that grants temporary stat boosts to the girl who’s swapped in depending on how injured the previous girl was. All attacks build up a special meter, and once it’s full it can be used to send the girl into a powered-up state.

All the parts are there for a solid fighting system, but it simply feels too loose, imprecise, and unsatisfying to be fun in its own right. Locking on to an enemy makes it easy to target more troublesome foes first, but the same stick used to rotate the camera is used to change lock-on targets. This can quickly make battles against more than two or three monsters quite frustrating. Even when hitting a target isn’t an issue, however, the impact of the hits doesn’t have the weight one would hope for from an action-heavy title. Combo’d monsters get juggled in the air like they’re weightless, and none of them need to be parried or have their defenses broken down—you just run up and start swinging. Boss battles present more of a challenge and are generally more engaging since they have more interesting attack patterns, but even these don’t really measure up from a gameplay perspective.

For all the issues there are with Crystar’s level design, enemy design, and combat, the sheer level of presentation value that’s been crammed into this release is astounding. Everything is fully voiced, from the grandest of cutscenes to the most inconsequential banter at the start of a map to little moments around Rei’s room before starting a new mission. It goes a long way in bringing every character to life, and the lion’s share of the performances are great. The visuals and score are similarly impressive, with the visual novel-esque portraits used for dialogue being lovingly detailed and the OST being full of addicting little melodies and ambient tracks.

The actual geometry of Purgatory is rather bland and uninspired, but the aesthetics the art team has managed to convey here absolutely shine through and give each level of the underworld its own distinct feel. There are even special little scenes in Rei’s room when preparing to modify Sentiments or save the game; everything outside of the core gameplay is polished to a pristine shine. There’s such style and personality that it can be easy to overlook the shortcomings of the action; I often found myself hurriedly grinding away at maps just to get to the next bit of dialogue or major story beat.

There are few RPGs that manage to perfectly balance delivering a strong narrative, attractive presentation, and fulfilling gameplay. Crystar achieves two of these things. It’s ultimately the story, cast, and high production values that carry the experience. The themes Crystar deals with are darker and more down to Earth than the majority of games out there, even going so far as to question the player themselves and their enjoyment of mindlessly destroying the souls of others. It’s easy to love Rei and her ragtag troupe of underworld enforcers, especially when the pain they feel is so convincingly conveyed. Underneath the glitz and glam, however, is a grind-heavy gameplay loop that artificially extends playtime and requires upgrades that can only be done via materials obtained by using a less-than-stellar combat system. Nevertheless, for those looking for a more mature story that doesn’t take itself too seriously, Crystar is sure to satisfy that itch. Just be sure to line up some podcasts or streams to enjoy while playing.