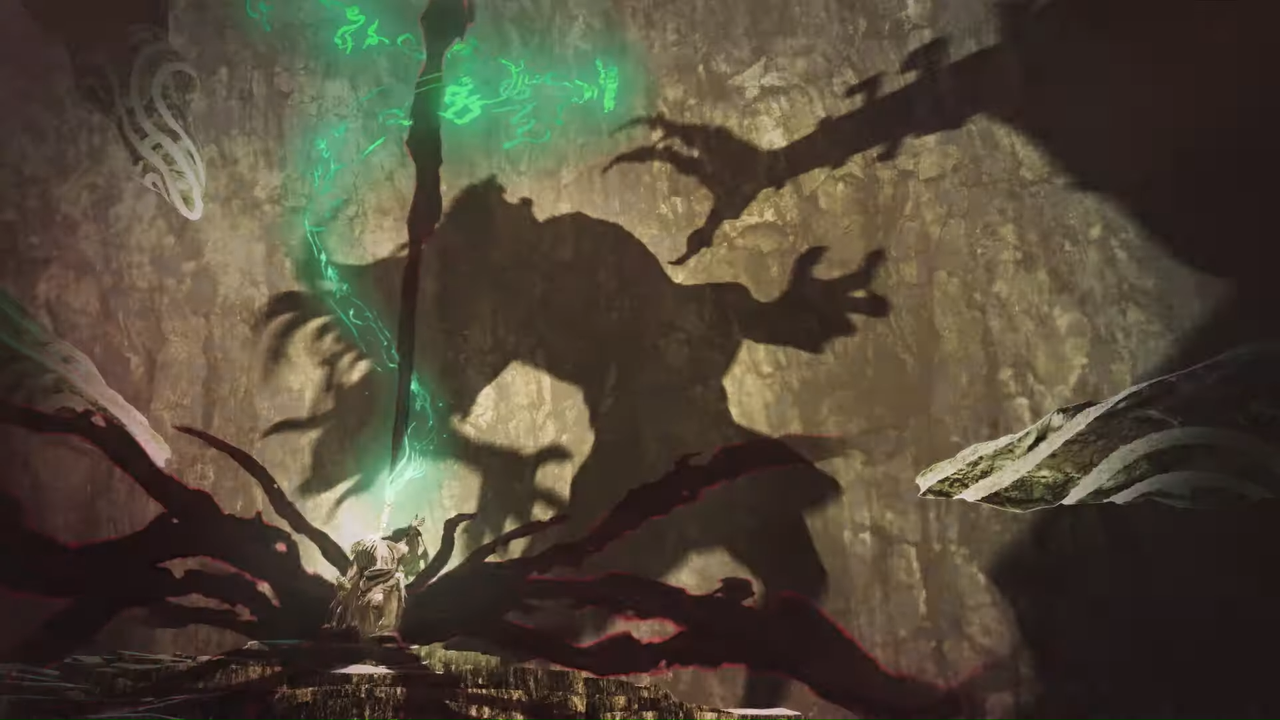 Let’s analyze the trailer for Breath of the Wild 2

During Nintendo’s E3 2019 digital presentation, fans were treated at the very end of the Direct to the announcement of their dreams, a trailer for The Legend of Zelda: Breath of the Wild 2. In true Nintendo fashion, the trailer was incredibly brief, vague, and intriguing, but the short theatrical release set the internet ablaze in speculation regarding the next installment of 2017’s wildly spectacular open-world title. Did you catch everything? Here is our take on the frame-by-frame of Nintendo’s Breath of the Wild 2 trailer:

The trailer begins in pure darkness, slowly broken by wisps of turquoise light forming some sort of script that doesn’t appear reminiscent of the Hylian language seen in Breath of the Wild. The wisps are shown to be part of a whirlpool guarding the outside of an ominous-looking font oozing the burgundy-black-looking material known as Malice onto a small, unmoving figure on the ground. Fans of the series will remember that Malice is the force that corrupted the Sheikah Towers and Divine Beasts in the original Breath of the Wild.

As the trailer continues, a torch illuminates an ancient cave drawing of a Ganondorf-like figure riding a horse and wielding a trident. The Malice ooze is shown again and Zelda and Link are shown for the first time, riding an ox and surrounded by turquoise crystals. The Legend of Zelda: Breath of the Wild 2’s protagonists are shown discovering the figure and then seen drinking from a nearby stream. A blob of Malice is seen moving up a flight of stairs, presumably towards Link and Zelda, who are shown crossing an old bridge.

The figures are shown discovering the figure, a mummified character that looks oddly like Ganondorf, being held down by a turquoise hand as Malice flows around him. Breath of the Wild 2’s trailer then speeds up rapidly and becomes slightly disjointed out of time. Link is seen being knocked back as the blue force moves towards his hand and Malice slams into the ceiling. Zelda and Link’s hands are shown reaching for each other, presumably to pull Link from where he has fallen. The outside of a foreboding-looking dungeon is shown and the turquoise hand is shown grabbing Link’s hand, stopping his fall.

In perhaps the best image of the Breath of the Wild 2 trailer, the mummified figure appears to be re-energized in a brief silhouette against the wall with a spectral-looking hand separated from his body. Zelda is shown to fall while the mummified figure’s hand slowly begins to twitch. The princess turns to see the figure’s hair flow while its head turns in her direction with its eyes lit in a fiery red.

The familiar Breath of the Wild map is then shown from a distance with the camera centered on Hyrule Castle. During the day, a cloud of dust bursts from underneath the Castle as it is seen rising skyward. Flashback to the darkness underground and the blue wisps are shown again. The trailer announces that “the sequel to The Legend of Zelda: Breath of the Wild is now in development.”

In summary, Breath of the Wild 2 places Zelda and Link adventuring underground, possibly under Hyrule Castle, when they stumble across the sealed evil of Ganondorf held down by a guardian’s hand. Upon this discovery, the forces of Malice cause some sort of seismic event that causes Zelda and Link to fall. During this tumble, Link catches Zelda’s hand and the turquoise creature catches Link’s hand, saving them from sure death but releasing the force of Ganon into Hyrule once again. Similarly, the villain takes control of Hyrule Castle and the forces of evil take over the land once again, banishing good, possessing divine beats, and bringing havoc to the world.

What happens after that remains to be seen. Check out the trailer below.

What mechanics do you think Nintendo will bring back? What is in store for Link and Zelda? When do you think the title will be released? Let us know in the comment below!