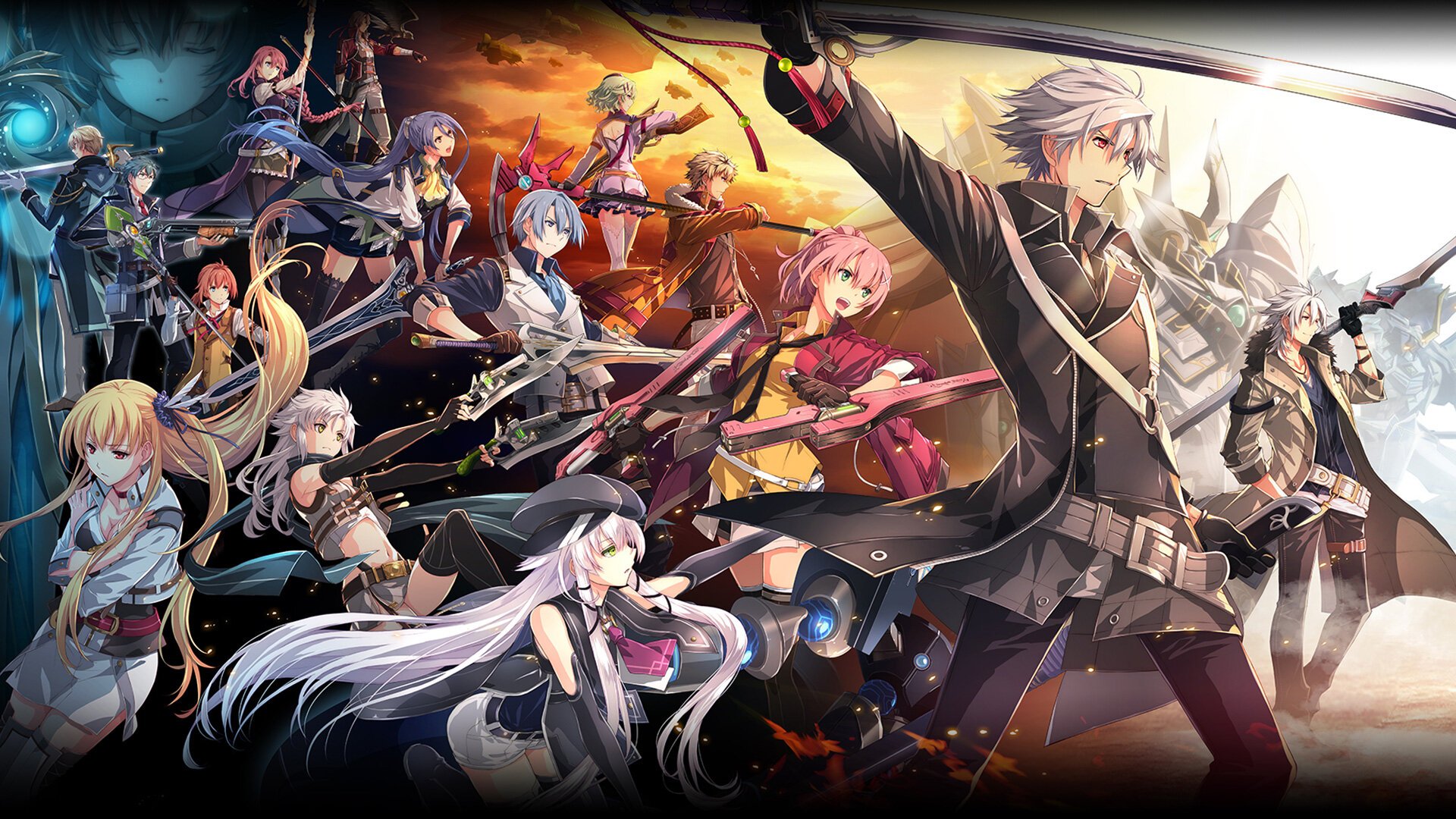 !!SPOILER WARNING!! This review may contain sensitive plot details pertaining to the previous game: The Legend of Heroes: Trails of Cold Steel III

It’s been nine years since the first The Legend of Heroes: Trails in the Sky released outside of Japan on the PSP. Nine years since Westerners got their first glimpse into the continent of Zemuria that would go on to be systematically developed over the course of five more games, not even counting the two that never made it out of Japan. The Legend of Heroes: Trails of Cold Steel IV is not only the final game of the Erebonian saga, but serves as a grand culmination of what every single “Trails” title prior has been building up to. It’s emotional, it’s cathartic, it’s inspiring, and it’s a conclusion that has been nearly a decade in the making.

Following the traumatic ending of the third game, Trails of Cold Steel IV picks up in an Erebonia on the brink of all-out war. All cities and towns are under wartime governance, imposing rationing of food, a military draft to bolster forces, and many other restrictions to aid in the coming war effort.

War is a tool and theme utilized in many JRPG’s, but none have highlighted how it affects the citizenry from all walks of life in such a grounded and sobering manner as Trails of Cold Steel IV. Father’s are torn away from their wife and child, life-long business partners find their earnest efforts vaporized, and Calvadian immigrants who had long made Erebonia their home now find themselves under close scrutiny and discrimination. Smaller details like everyday produce gradually creeping up in price and long-running NPC’s suddenly vanishing make the portrayal feel chillingly real, and seeing the fictional country I’d grown to appreciate turned upside down was a constant point of heartache throughout the narrative.

It’s this powerful setting that carries the first quarter or so of the game’s story because, despite the haunting way the previous title ended, Trails of Cold Steel IV is a little slow out of the gate. There are many moments that allow Class VII to demonstrate how they have grown as individuals, but the sense of urgency doesn’t quite match the stakes at play until after a certain point where the story really hits its stride.

Convictions and ideologies from across the board clash and are challenged as Class VII and their allies struggle to seize the happy ending to a wretched fairy tale. Numerous important plot threads seeded as far back as the first Trails in the Sky game bloom in full force and repeatedly left me in awe at the forethought that went into this series’ writing. Those that have only stuck to the “Trails of Cold Steel” saga may find some character introductions to come out of the blue and the gravity of some revelations may not be fully felt, but rest assured there will still be plenty of tasty payoffs in store.

Prominent figures across every “Trails” game come together to aid the effort to create an intricate network of outstanding individuals truly worthy of a game with “The Legend of Heroes” in its title. Not to mention, seeing the likes of Estelle Bright and other legacy characters with fully 3D models for the first time never failed to elicit squeals of joy from me. The English voice acting for these new/returning faces is superb for the most part although there are a handful of performances that could use some work. As before, though, Japanese audio is available for those who prefer it.

The narrative does tend to overuse this impressive cast as a crutch to bail out Class VII whenever they find themselves in a pinch, though. This was a problem in the previous “Cold Steel” game and it’s even worse here; the number of times a third party swoops in to save the day at the very last moment like some masked tuxedo gentleman is too many to count and undermines Class VII’s efforts.

This is a relatively small blemish but a distracting one as the game marches towards its powerful and explosive climax that ties things together in a remarkable way. Some of the finer details on the esoteric magic at play do get a little tangled along the way, making for an ending that barely falls short of complete logical clarity. After the dust had settled I nonetheless felt a swell of pride for the legendary heroes after everything they had been through and accomplished.

Trails of Cold Steel IV will make you work for that closure, though, as it is definitively the most difficult game in the saga and approaches the notoriously soul-crushing Trails in the Sky 3rd. Even playing on Normal put me in more than enough situations that forced me to dig into my toolbox to barely scrape by, including outside of boss battles.

Those tools available remain more or less unchanged from Cold Steel III, almost disappointingly so. There’s nothing actually new to the series in Trails of Cold Steel IV’s combat; you can call Panzer Soldats and Divine Knights for a powerful attack and cast Lost Artes, but those are simply returning features from Cold Steel II. Most characters only receive powered-up versions of the crafts they already know and the new crafts that are learned don’t add much to the playing field. As a result, there isn’t as much of a sense of growth and progression as there was in prior titles. Instead, the combat has been tweaked and rebalanced to force you to utilize all the systems in place to their maximum potential.

While Brave Orders were overwhelmingly powerful in the previous game, their potency has been toned down for Cold Steel IV, at least to start. Brave Orders can be powered up by completing special Trial Chest challenges that dot the world and require specific party compositions to take on. Your Brave Orders eventually reach a more powerful form than they were in the previous game but the game’s challenges evolve along with them. This, along with how Break is not quite as debilitating to enemies anymore, makes Brave Orders feel more like a downright necessity rather than a cheap win button.

The difficulty is further compounded when the game tacks on additional objectives to already brutally challenging boss fights that earn you additional AP for fulfilling, AP that is necessary if you want to 100% the game. These challenges range from chopping a boss’s health down in a certain number of turns, not allowing any party members to be KO’d, to defeating two bosses in the same attack. To make matters even more complicated is the fact that bosses can now use their own form of Brave Orders, Dis Orders, that not only impose restrictions on your party — such as increased attack delay — but also prevent you from using your own Brave Orders until they expire.

Fulfilling the AP conditions of boss fights means adapting on the fly and being unable to settle into a one-size-fits-all battle strategy. You’ll be forced to use certain party members during certain parts of the story anyway, and since Trails of Cold Steel IV features the largest cast of playable characters the series has seen — 39 in total — you’re going to find yourself mixing and matching strategies constantly. One special treat is the many unlikely allies that number includes that are best kept a surprise. It’s a testament to the game’s balance that despite that gargantuan cast, no character feels particularly worthless, although some certainly feel more powerful than others.

You’ll be taking that cast of characters all across Western Erebonia and Crossbell much as you did in the previous game, fulfilling requests and getting a lay of the land as part of the story. Intermittent bond events along the way provide some of the most tender and vulnerable moments of the characters I’ve grown to love, and feel more like crucial main story rather than missable lore.

While you’ll mostly be retreading ground you already covered in Cold Steel III, there are a handful of new locales you’ll visit that are lovingly fleshed out. I still continue to be impressed by how every single store, inn, and workshop in this series has its own uniquely designed signboard; details like that go a long way towards making the world feel lived in and seeing how that world has been affected by the war effort is relentlessly gripping. The geopolitical hotbed that is Crossbell is a particular standout, especially if you’re one of the few that played the unlocalized duology that takes place there.

Your tour around Erebonia is accompanied by more or less the same soundtrack as the previous game albeit with some slapping new battle tracks. Noteworthy, however, is when a town or city’s theme is replaced with the same dour, investigative number to match with the tone of the story. This single song drones incessantly during extended segments of the game and it doesn’t take long for it to become grating. It’s one dud among a collection of stars that gets used several times too many.

What also continues to be a dud for the series is unimaginative field and dungeon design; they are still bland monster corridors with maybe a switch to flip here and a button to press there. Dungeons always feel like you’re just going through the motions to reach the other end. While it’s not the biggest issue since combat remains so enjoyable, their designs stand in stark contrast to the extraordinarily detailed and well thought out towns. If there’s one area I wish Falcom could improve on in future entries, it’s here.

The lack of any radical additions to the combat system and nitpicks on environmental design are ultimately inconsequential, though. The Legend of Heroes: Trails of Cold Steel IV is as direct a sequel as they come. If you’re playing it, it’s because you’ve already played the previous game and want to see how the story picks up the pieces of shattered hope it left in its wake; everything else is dressing. In that regard, Trails of Cold Steel IV delivers on its promise to conclude one of the largest sagas in the JRPG genre, or even video games as a medium. Much like the heroes it features, it has a few stumbles along the way but nonetheless emerges as a triumphant legend.