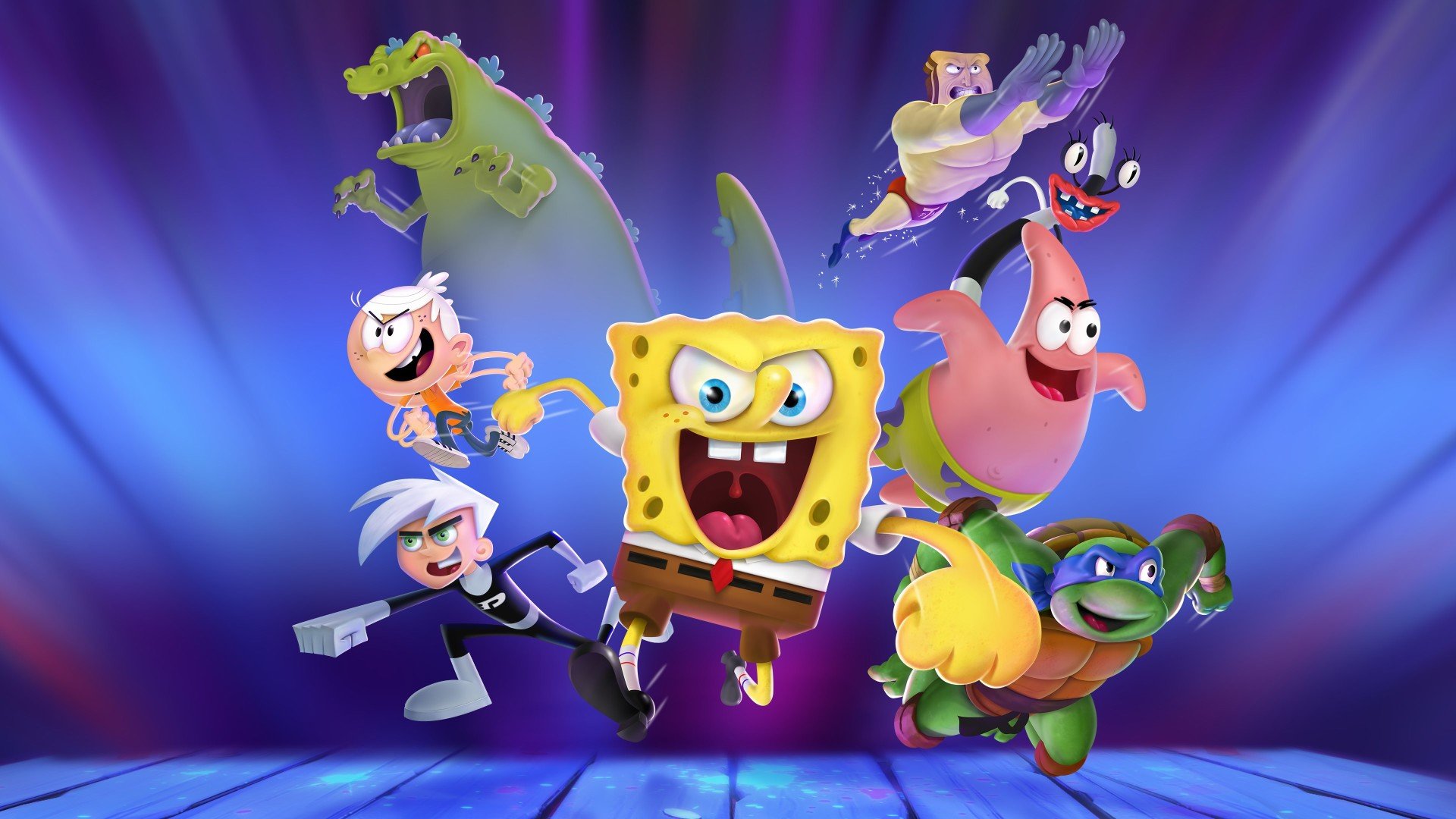 From the developers of Slap City and a publisher that has continued to hamper Viacom’s iconic cartoon properties, Nickelodeon All-Star Brawl has the basis to build something phenomenal but lacks a clean execution. After three months since its initial announcement, the platform fighter inspired by the Super Smash Bros. series and other competitive games in its genre such as Ubisoft’s Brawlhalla disappoints in many regards. It displays a low budget and lack of polish despite having a solid foundation with promising multiplayer gameplay. Like Game Mill’s other recent Nickelodeon titles, the entire crossover’s production feels all around cheap and incohesive — so cheap that it makes Mr. Krabs look generous.

A thematically appropriate comparison to Nickelodeon All-Star Brawl’s current state would be calling the game a Krabby Patty without the lettuce, cheese, onions, tomato, ketchup, mustard, and pickles. It’s a seeded bun that looks delicious with the smell of meat constantly lingering, yet it contains almost no substance or care upon inspection. You cannot expect Nickelodeon All-Star Brawl to achieve the same quality as any of the triple-A mega-budget titles that inspired it, but that absolutely does not mean players should be willing to accept the bare minimum.

With future updates, perhaps the game can become something worthwhile. However, in its current state, it feels lifeless and devoid of any true passion — and that’s not just because of a lack of voice acting as many fans have vocally complained about.

I’m Not Ready [For Release]

Whereas Super Smash Bros. as a series feels like a celebration of Nintendo and gaming, Nickelodeon All-Star Brawl does not look and play as if it were devoting itself to being the ultimate experience for Nickelodeon’s franchises. Nickelodeon All-Star Brawl is presented as if its iconic characters were just thrown into a fighting game — a cash-in that would have been considered shovelware two decades ago. The lack of polish seen throughout the title seeps through every one of its bleeding cracks from the second you boot up the title to the time you finish your first battle. There are factors to highlight about its design, but the rushed presentation, lack of accessibility, and bafflingly limited number of modes constantly bring down the entire experience.

The in-game graphics are overall not too bad. The visuals are far from striking, yet they manage to get the job done. There are some recurring graphical issues involving pop-in and lighting effects, however, almost every playable character models looks clean and stages are usually engaging. Everyone part of the roster resembles their original appearance. Each stage may lack interactivity and personality, but they at least can be perceived as what you would imagine a Nickelodeon fighting game to hold. The roster of twenty characters and stages coming from across the company’s history is also a great showcase of their modern and retro icons.

Like the ridiculousness of Super Smash Bros., the fact that The Powdered Toastman from The Ren & Stimpy Show can fight CatDog on Avatar: The Last Airbender’s Omashu is hilarious yet loveable. Though their scenic animations can be pretty shotty, stages like Harmonic Convergence and CatDog’s house feel in line with their shows. Many of the characters though do not represent who they truly are. A lot of the movesets in this game feel as if they are trying to be just fighting game character moves — seriously, why is Aang so heavily reliant on close quarters? There are a handful of outliers that excellently represent their characters such as Toph, Sandy, and Ren & Stimpy, but they can feel far and few against the majority.

The contrast between the design of each character and the overall gameplay is unexpected. Although the action may not be enough to save it, Nickelodeon All-Star Brawl thrives most with its gameplay. Players battle it out by utilizing gameplay mixing Super Smash Bros. Melee and Slap City. There are three action buttons, jumps, grabs, recoveries, and combos to perfect as players attempt to smash one another out of the stage’s boundaries. Each character can easily be picked up and is fun to mash buttons with, and like Super Smash Bros. they are difficult to master. In the vain of the other game’s features mentioned so far though, there are quite a few issues with the gameplay — many that are fixable though.

For one, the way some characters control can be a bit imprecise and too weighty. Not properly reflecting the source material is a separate issue, but the developers can eventually tighten up and overhaul the controls of some characters. To no surprise, the balancing is currently a vital issue — not the worst there has been in a fighting game, but there are broken moves and combos. While this will undoubtedly be fixed in future patches, quite a handful of characters are absolute tanks compared to their castmates right now. From my hours of playtime, CatDog, Michelangelo, and Oblina are overpowered due to how much damage they can cause on top of their irregular hitboxes.

One important gripe I have with the game is that there are strangely no tutorials. There are a ton of developer commentary videos for Nickelodeon All-Star Brawl that showcases each fighter’s moveset, yet Ludosity did not include a gallery or list of every characters’ moves along with the game’s basic mechanics. Considering the developers made dedicated moveset spreadsheets and videos across social media for promotional purposes but did not include them in the game is rather baffling. Moves like wavedashing that are never taught to the player are unbelievably easy to pick up and get a hold of within minutes. With a little in-game player guidance, mastering Nickelodeon All-Star Brawl would be a lot more digestible.

Outside of standard matches, players are given a few extra game modes to squabble in, but none compare to the regular battle mode. Like Brawlhalla, Nickelodeon All-Star Brawl has a sports mode where players can team up together to score goals with various balls. Sports Battle offers an enjoyable alternative for players seeking something outside of the standard battle mode, yet it lacks any changeable settings or enhancements that could potentially expand its longevity in the living room. The same can also be argued for Timed Battles which only allow players to see how many knockouts they can get within a limit.

Then there is the Arcade mode; a poorly thought out single-player that received little to no attention from the developers. In the same style as the Classic Mode from Super Smash Bros., players choose a fighter to use throughout a dedicated route of challenges. Before a match players get to sit through some hilariously awful enormous textboxes littered with random quotes in small black text that never align with one another. Everything added here feels so disjointed and uncared for. There is not an ounce of personality in these small conversational sections that predate each brawl.

On a quick note, the extras artwork players can receive from completing arcade routes have not been cropped properly. When looking through anything in the gallery, the screen crop at the top has bafflingly not been sized right — seriously, did anyone give this game a thorough check? Considering that’s the main reward for completing this game mode, that’s just another embarrassing aspect of this entire single-player.

Ludosity was evidently reaching for the competitive scene of Super Smash Bros. Melee with their platform fighter, but Melee is more than just competitive fights. It’s a shame the game does not contain wacky item modes, more accessibility options for players, or a single-player that shows a single thought of care. If you are fully submerged in the competitive aspect of the Super Smash Bros. series, this will be far from your first issue with the game. Where all players will constantly struggle to connect with Nickelodeon All-Star Brawl is within its presentation — and there is so much more to go over despite what has already been touched upon.

While the lack of voice acting has been vocally made well aware by followers of the game, the laughably awful menu designs and the overall accessibility and cleanliness of the user interface are where the title truly makes a fool of itself. Before we get into those issues, it should also be mentioned that the game contains no licensed music from any of Nickelodeon’s franchises. As if the lack of voice acting was not bad enough, the generic and bubbly music that barely sounds ready for a fight feels insulting to its intellectual properties. Seriously, have a listen to the music on the two Avatar stages and Harmonic Convergence from The Legend of Korra — it feels like someone saw how each show utilizes Chinese text and decided that it needed any sort of Asian-sounding music. It’s just insulting.

As if the presentation was not embarrassing enough, the addition of rollback netcode that the developers praised does not live up to expectations (although this could just be because of an overwhelming amount of players at launch). Despite having a great internet connection, all the online matches I played were buggy and rarely played out seamlessly — it ironically reminded me of Super Smash Bros. Brawl’s online when having good matches was so far and few. Also, this problem only pertains to the Nintendo Switch version of the game (which, by the way, is already being plagued with blurriness in handheld mode), but it should be known that players practically have to reconnect their controllers on almost every other menu.

It’s Not So Smashing, Nigel

The most concerning aspect of Nickelodeon All-Star Brawl is its future. While many fans are already speculating who can join the roster next, the lack of polish not being confronted is concerning. The developers are already jumping the gun to make DLC, yet they have an overwhelming amount of work to improve upon in the base game. Nickelodeon All-Star Brawl may warrant the possibility of having more content, but there is so much the developers should be fixing before they expand upon what they have. Adding in voice acting, sprucing up the sound design, and reworking graphics (both stages and menus) should be their core effort right now.

Ludosity as a developer has clearly shown its potential in the past with Slap City, but Nickelodeon All-Star Brawl is a conjointed embarrassment that takes Game Mill’s unwanted quirks and collides them with the ambitions of their key developer. While it may showcase solid gameplay mechanics and a cast of loveable icons, the game as a whole culminates into one of the biggest wastes of potentials 2021 has had to offer. The only person that could possibly want to pick up this title in its current state is an unaware parent looking to distract their children for a couple of hours with franchises they recognize — but even then, at a day one price tag of $49.99, they are better off looking into almost any other experience.