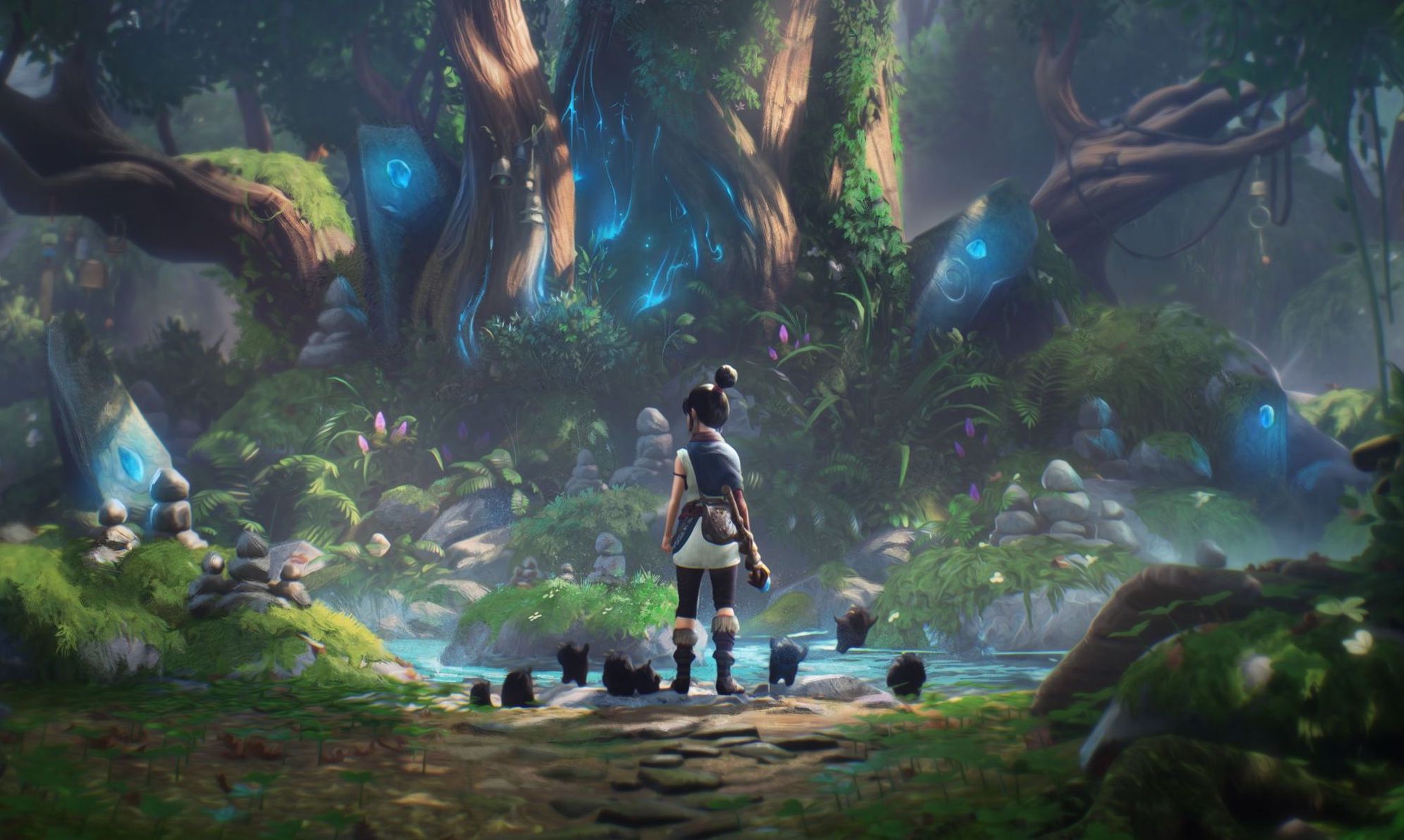 Kena: Bridge of Spirits is the culmination of everything Ember Lab has created thus far. After years of presenting masterful shorts, it is only natural that the post-production company’s first video game project would flourish in the same charm its commercials and fan films have boasted since their inception. Despite being their first leap into a different medium of entertainment, Kena: Bridge of Spirits shows that Ember Lab is still on top of its game. The company has intertwined its best efforts into a seamless world of light and darkness that may occasionally appear dated but is absolutely worth visiting.

Taking place in a world shaped by the presence of forces beyond the living, Kena: Bridge of Spirits‘ narrative absorbs its style and grace from what Ember Lab already succeeded with. While the story may not always explore its loveable protagonist to a deep extent, saying that the storytelling lacks depth would be a disservice to its emotional moments. To keep the premise as simple as possible without going into detail, the titular Kena is a spirit guide who must help lost souls find their way to what lies beyond the land of the living by repelling their darknesses. Her world’s story initially may playoff as generic, yet it grows to be both moving and surprising. Where the game’s focus really lies is in its gameplay and visuals.

As the player explores a lush open world, they will solve puzzles, fight humanoid spirits, upgrade weapons, and go on a collectathon for a handful of rewarding items. For an independent game that lacks the budget of a triple-A experience, Kena: Bridge of Spirits puts its smaller and larger competitions to shame. From its action to its artistic composition, the title knocks it out of the park with so many of its core design aspects. There may be a handful of problems with the gameplay, but its stylization and animated wonderland make it a nearly perfect adventure. Everything intertwines in a fashionable matter that feels effective and never loses focus, but there is certainly a warranted coat of polish behind its many highs.

There is a lot to love about Kena: Bridge of Spirits’ gameplay, but it is unquestionably where all of its shortcomings come from — many of these issues actually tend to go hand-in-hand for the most part as they tie into the player’s growth. While platforming and puzzle-solving are always a blast no matter what point in the narrative the player is at there are some noticeably annoying flaws that could have been easily fixed with connected solutions. Fighting enemies is always exciting and the controls are buttery smooth, but early odd difficulty curves and shallow progression often seep through the grander aspects.

During the first third of the game, the combat can oftentimes feel as if the player has an overwhelming upper hand on their enemies. Most of the hostile forces can be mowed down in less than two or three hits with players’ beginner attacks. These generic enemies may lack any thoughtful weaknesses, but thankfully the later foes require much more attention to overcome. However, getting smarter does not necessarily mean that the player will get to employ more skills. Kena: Bridge of Spirits can quite literally be beaten with the unaltered moves and weapons the player receives at the start of the adventure.

Disappointingly, Kena: Bridge of Spirits has a promising arsenal of abilities that provides no real progression — not because they aren’t hard to earn but due to their lasting worth. With only one melee weapon, a long-ranged bow, bombs, and the ability to dash, the game leaves itself with a small number of upgrades for the player to unlock that do not contribute much. The vast majority of these moves feel rewarding to use, yet they come off as features that could have easily been implemented into the player’s base moveset. They never provide any true variety to the combat or even necessarily skills that are required to finish the game.

It’s not just the weapons that suffer from this problem. They may be fun to collect and utilize, but the Rot creatures present a large growing number that represents little progression in terms of combat and somehow puzzle-solving. Apart from droplets that allow the Rot to take a larger serpent-like form as the player recruits more of them, the number of these spirits to collect can feel a tad insignificant in the long term. Customizing their costumes and seeing how they interact with the world will always put a smile on the player’s face, but nonetheless, it is a shame how the gameplay underutilizes their long-term presence.

During Kena: Bridge of Spirits’ hands-on previews, a lot of users compared the game to titles such as Horizon Zero Dawn, Pikmin, and God Of War. However, the clear inspiration for the game comes from The Legend of Zelda: Majora’s Mask and its iconic fan film that Ember Lab helmed. Majora’s Mask — Terrible Fate was a spectacle that further skyrocketed the company to fame. Everything that short succeeded on in terms of both visuals and narrative — along with Ember Lab’s other projects for that matter — was carried over magnificently to Kena: Bridge of Spirits artistic direction.

While the gameplay has its faults, it’s no shocker that Ember Lab’s title would thrive most from its breathtaking visuals, cinematic direction, and audio design. Kena: Bridge of Spirits stands as not only one of the best-looking and sounding PlayStation 4 and 5 titles ever released, but one of the finest in the gaming industry overall. The gameplay may be refined, but the lush world Kena: Bridge of Spirits holds is one of the digital realm’s most beautiful landscapes to ever release on any platform.

On top of gorgeous environments, clean character models, and atmospheric effects, Kena: Bridge of Spirits truthfully thrives in visuals because of its animations. Whether you are watching cutscenes or walking around the world, there are always movements to sit back and admire. The game’s cast and environments never remain still–everything is highly expressive and constantly moving. Not a single spec of Kena’s palpable land feels as if it were forgotten or designed to simply act as something for the player to pass by. This sentiment especially shows itself with the Rot species.

Whereas the Rot may be criticized for their overarching gameplay purpose, it is impossible to deny the fact that they are beautifully animated. The spirits never feel as if they are glued on to Kena or their surrounding environments. They are constantly expressive and characterized by their movements and interactions with the world itself. The Rot are regularly interacting with their surroundings as they jump between locations and engage with structures in unique ways. Kena’s world already feels organic and lively thanks to its therapeutic atmosphere, but the Rot adds another layer of spirit to the game.

Of course, having a visual spectacle in an Ember Lab project means that the audio design was bound to be a knockout too. Kena’s score composed by Jason Gallaty and Dewa Putu Berata is remedial to the soul. It is bursting through the seams with heart and proper articulation as it helps further enhance the player’s immersion with environments and cinematics. On top of fantastical orchestrations and well-pieced sound design, the game boasts an excellent voice cast breathing into its many characters. Berata’s daughter, Dewa Ayu Dewi Larassanti, ended up voicing Kena herself, and you would think she is a veteran of the industry, but this is her first gig. Larassanti does a spectacular job, as does the rest of her fellow actors. All the performances together are just another factor that helps keep players invested.

The only disappointing aspects coming from the look of the game comes from the transitions between gameplay and cinematics. The cutscenes were clearly designed with a moviemaking mindset and sadly do not accommodate for performance mode on PlayStation 5. Rather than adjusting to the smoother sixty-frames look, the pre-rendered cinematics stick to half that rate. They still look unbelievable, but it can feel weird instantly jumping between the two — however, this problem is only for those using performance mode. The brief loading screens that equate to literal seconds do not ruin the fluidity of the presentation either, but hopefully in the future Ember Labs will be able to iron out this nitpick in whatever they choose to pursue next.

A Bridge Between Works