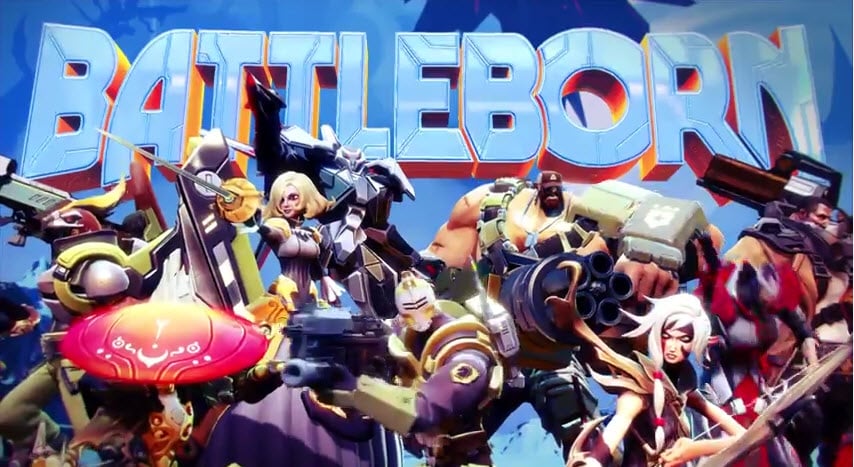 Take all the spaciest stuff from Borderlands, change the endless arsenal of elemental weapons for specialized skills and weapons for 25 new characters, and you get Battleborn. At least as far as the story mode is concerned, the fact that this is a MOBA game hyped as a successor to Team Fortress 2 makes it a layered experience I’ve been anticipating for months.

While all 25 characters were definitely not available (some are apparently unlockable by pre-ordering the full game, others unlocked through play), I did enjoy the unique weapons of my chosen character, Miko. She’s basically a mushroom warrior, throwing spore pods like stinky water balloons and laying down toadstools that heal comrades and damage enemies. Mainly she just throws knives––hundreds per minute with speed power-ups. Picture a twisted Miyazaki forest spirit with Shinobi’s arsenal.

The reticle, shaped like a space-age abstract of a mountain, turns red when the enemy is in your sights. When you’re flinging knives into an absurd distance against either teleporting behemoths, skinny slinking targets, or a level bosses ten times your size floating a few stories above your head, the targeting definitely helps. It took me a while to get that my spore pods were exactly that and not grenades, but that’s FPS conditioning for you. Otherwise I found the power-ups like over-shield, speed boost, and cool down to be immensely helpful. Fair warning, they go to whomever grabs them first and they last a short duration. Learn to spot power up containers and snag them strategically during combat. 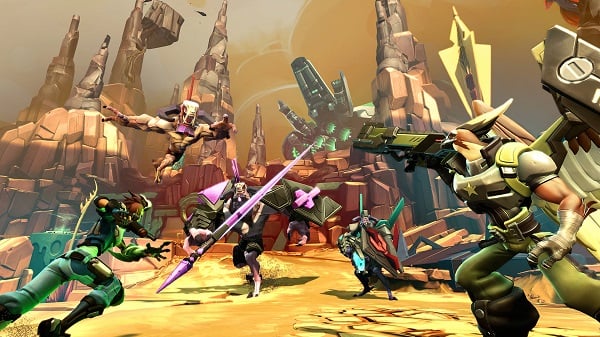 The team dynamic in Battleborn’s story/co-operative mode is like playing Borderlands split screen times five. Five times the slaughter means some pretty cool teamwork bonuses and extra allies to revive you when you go down. Some characters are purely offensive, but many have abilities that can do more than help you take down a Varelsi faster. The Varelsi, like Borderland’s Guardian enemies, are alien creatures purple-black in appearance. They appear in two classes: Thralls, gorilla-like and capable of immense melee damage; and Shadows which are more wraith-like.

In Story Mode, Episode 2: The Void’s Edge, your team of five battles the Varelsi to prevent them from invading Solus––If someone drops out, there’s more to kill which means more loot and exp per player. The Varelsi are spilling through a rift in space-time called a portal bloom, which you must close before it stabilizes allowing their army to come through in force. Wave after wave of Varelsi enter through small portals to ambush the team until you reach the mini-boss, Warlord Nix. Nix is an enormous Thrall with a BFG (big friggin’ gun), he lays into your team with his mini-gun standing on two legs much like the goliath in Borderlands. Despite a very bull-like appearance, he wont’ rush you, which threw me, but his Primal Thrall minions will. Don’t think you can post up and take him down safely from a distance because the minions will find you. This Episode ends with a fight against the enormous humanoid Conservator, which reminded me a lot of the techno-synthetic enemies from Star Ocean. The Conservator will raise a dark matter shield which consumes the battleground, killing your characters unless you can take out the shield generating Varelsi around it first.

In Episode 1 (which I played second), your team is going up against the rogue AI “ISIC”, who sends robot minions after you. Squeaky voiced and foul mouthed, ISIC taunts you with 4th wall breaking jabs like “this is real life, when you die you’ll really die…I’m talking to you, holding the controller”. The robots range in difficulty and attack styles as much as the Varelsi. Some directly mimic character classes, from the MX ronin to the MX deadeye sniper. Others are just annoying like the seek-and-explode bugs. Frigid Guardians, which can buff to be immune to some attacks and are beefy melee enemies, are the toughest–it’s not clear whether they’re robots. ISIC fights in a huge stompy insect body with power cores on each leg that have to be targeted and destroyed before you can immobilize and damage him. The battleground’s Tron motif indicates that you’re in an artificial world, kind of, which adds a level of sense when the disembodied skull head of ISIC comes after you. When you defeat ISIC he becomes a playable character, albeit in a smaller robot body. 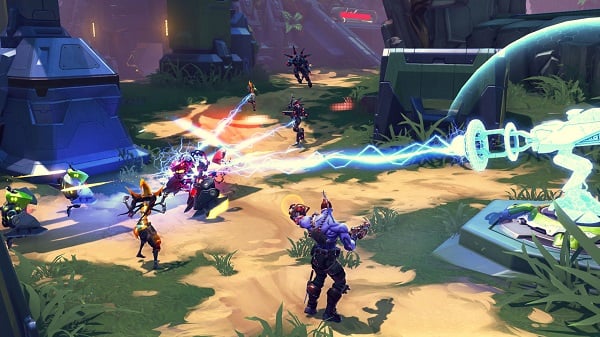 Battleborn characters level-up using a Helix (think DNA) that let you choose from two perks at each level. Generally the left perk is defensive including health, shield, and targeting attributes. The right perk is mostly damage including soak damage over time, increased number of projectiles or weapons damage. Completing missions will earn you loot packs full of gear that increase speed, shield, damage, cool-down, reload, or health. Unique pieces of gear also carry abilities like exploding upon death or increased resources. Some pieces of gear carry a penalty to attribute that opposes its buff, and all items carry a shard cost. So players aren’t able to just equip and forget. Your gear lives in a gear bank, from which you can create custom load outs, and you can sell gear for credits.

Gearbox, doing credit to their namesake, are boasting that there will be 80,000 unique pieces of gear in the full game. Fortunately, everyone on your team will get the gear pack upon defeating the boss and finishing the mission. You’re also able to purchase gear packs with credits earned in the game, unlock some by pre-ordering the full game, and probably purchase gear specific DLC in the future.

I appreciate the graphics and having the entire screen to myself, although it means that I’ll be taking turns and possibly arguing with my wife (if you have gamer roommates, same deal). Although PC gamers have always been isolated outside of LAN parties, the demise of couch co-op for console is a sore spot. Fortunately us console gamers are getting superior, next generation experiences with insane depth of varied play with many thousands of items, enemies, and abilities in exchange for our shoulder-to-shoulder social video-gaming experience.

The chat channel is open on Battleborn, so whether playing public or private modes you’ll hear the other players’ colorful frustration. Personally, I opt for leaving the headphones out and turning the player speech off in public mode. Nothing ruins my immersion in an alien world faster than a burst of frustrated expletives. But in private mode, I like being able to taunt or strategize with my friends––just like we did from my beat up couch in the Halo days *single tear*.

Like Borderlands, Battleborn is definitely an arena grinder, with loads of gross humor, sexual innuendo, and visceral swearing––basically everything we’ve come to expect from Gearbox in both tone and gameplay. Character classes are similar to Borderlands games in the instance of gun wielders yet more diverse. Hybrid characters break from the norm, like mech driving ISIC, who uses shields and drones similar in some ways to the Borderlands engineer class. Shayne and Aurox, a cocky kid wearing an omni-dimensional horror as an exo-suit, inflicts massive melee damage reminiscent of Fallout’s Deathclaws. There are also shooter variations like the elven archer Thorn, who curses enemies for soak damage with green forest mist. Galilea is more sword and shield than we’ve seen in Borderlands, although the four-armed Orendi’s chaotic energy attacks are still FPS despite her witchy appearance. Specials are more diverse from ISIC’s teleport-trample to Battle-throne-mounted mad-scientist Kleese’s energy rift and black hole. 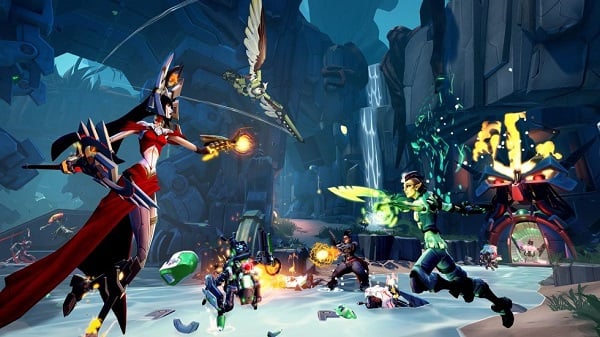 I could write a whole other article just detailing each character. Seriously, there are 25 playable characters with entirely unique in abilities, appearance, and personality. Gearbox has put a lot of work into back stories, making the characters into uneasy or unwilling allies at the best of times and arch-enemies at their worst. The voice acting is entertaining and fits the characters well, the same quality we’ve come to expect after years of Borderlands. The entire game is cell-shaded in the signature Gearbox style, but additions like liver spots, beveled armor, wrinkles and other skin and clothing detail bring the cartoonish characters to life.

Even where mechanics overlap, Gearbox has done a great job of making the characters’ abilities and attacks make unique sense based on each character’s faction, history, and species/race. For example, Orendi’s energy attacks are dark and mystical as her roguish allegiance and witchy appearance warrant, while Deande’s quick strikes are elegant, signified by blasts of light and energy befitting her assassin class and imperium background. Gear will benefit class by the stats that it buffs, but will not change your characters’ appearance. If you want to change up their style, you’ll have to unlock new outfits. And each character levels up separately as you use them, which means you could play the story game through with 25 unique characters––or 3.57 unique characters each day of the week.

That’s a lot of of grinding guys and gals. This is just the beta, but I’m already hooked and looking forward to those hundreds of hours of potential gameplay. What can I say, I’m a sucker for the chaotic arenas, robots, big bad badasses, weirdo alien creatures, and insane class variations. See you on the field, fellow Battleborn.